The following page contains the walkthrough for the story mission Downpour in Shadow of the Tomb Raider. The quest starts with an unexpected attack by Trinity, as a result of which Lara loses her equipment and needs to go through the oil field with the intention of finding Jonah. In this mission, the heroine encounters a lot of battles with Trinity members, although many mercenaries can be disposed of with silent takedowns. 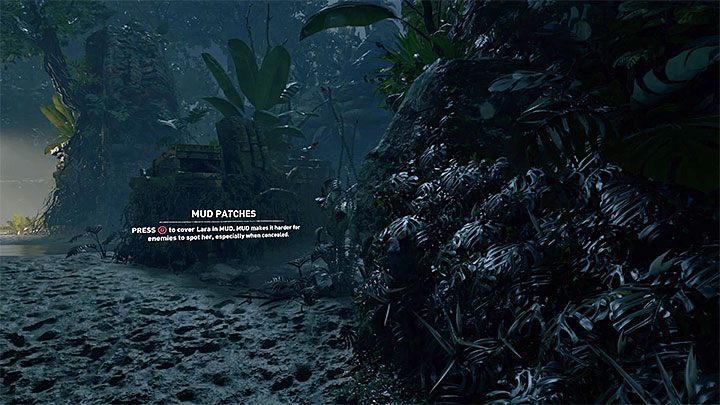 Note - When you start exploring the new location, Lara does not have any equipment other than a knife and her axe. This is a consequence of the story that could not have been prevented. Over the course of the mission you will gradually acquire new equipment, first the bow, and even a heavy machine gun just before the final battle. In the next main mission you will be able to freely use the previously acquired gear.

You start in the riverbed and immediately acquire a photo (Commander Rourke). Because you don't have a ranged weapon, you'll have to sneak past the enemies or rely on takedowns after you get close to them. You can also put on a mud camouflage shortly after the start of the mission - use this option. 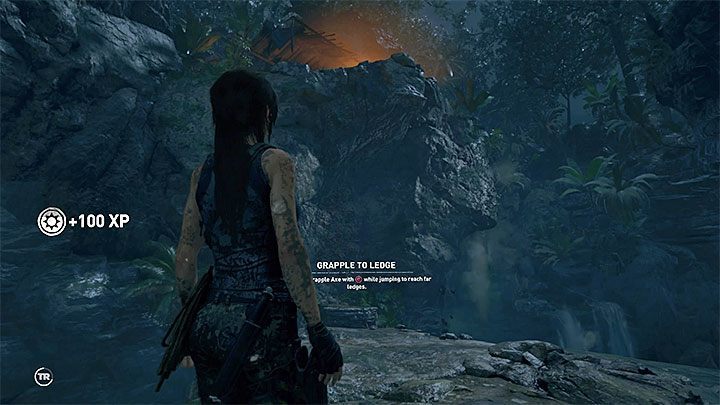 Once you've dealt with your first group of opponents, climb up to the top shelf. Also in the new location, look for opportunities to surprise your opponents - you can climb up the trees and find throwing objects to distract their attention.

You can start a new climb in the place shown in the picture, and it requires the use of the grappling axe. In the further part of the climb you have to reach an overhang and climb up to a high shelf. There you will find the first camp (The Beach). 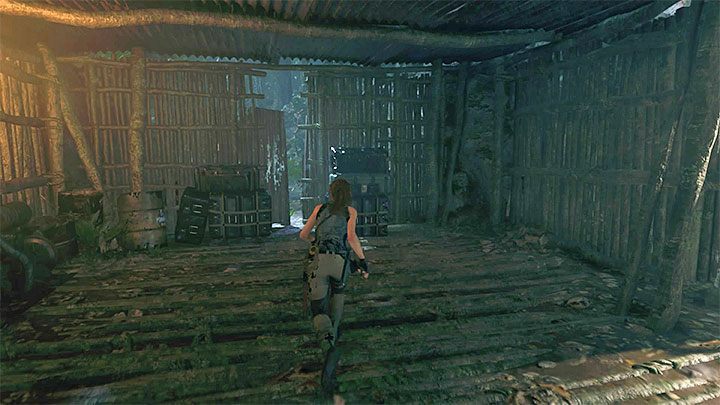 Continue your journey by listening to a message from Rourke. In this new location, you'll come across enemies using thermal imaging goggles for the first time. They can detect Lara even if she is hiding, for example, in bushes. Fortunately, you are not defenseless, because the goggles have a limited field of vision, cannot see through walls and will not detect Lara in the bushes if she has a mud camouflage put on. Try to approach those enemies from behind or avoid them when they are busy "scanning" an area.

There are a lot of items in this location that you can use to produce grenades of Molotov cocktails. It's best to use them to attack enemies when they are close to each other. You can also sabotage the generator and climb some objects. Location exit is shown on the screenshot - get there after killing or getting past the enemies. 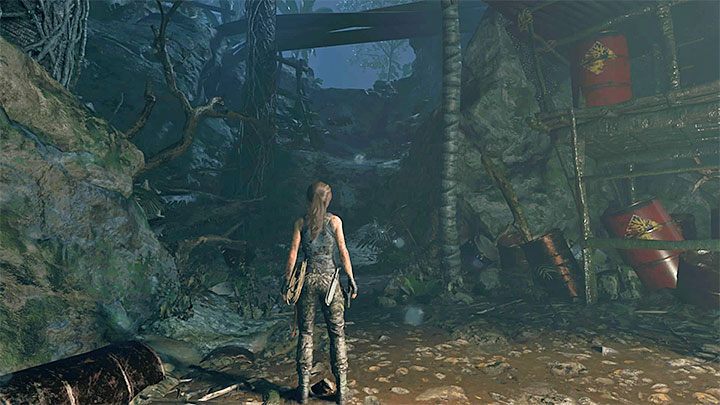 In the next area, again, pay most attention to avoiding detection by enemies with thermal goggles. It's worth using mud camouflage in this area, so that apart from bushes, the heroine will be able to hide by the walls covered with mud. Just like before, rely on throwing objects (you can also throw canisters) and climbing on roofs and higher shelves.

Location exit is shown on the screenshot - Lara has to climb to the higher shelves here. When you reach the highest, Lara will find herself at the lookout point, from which you can see the refinery. 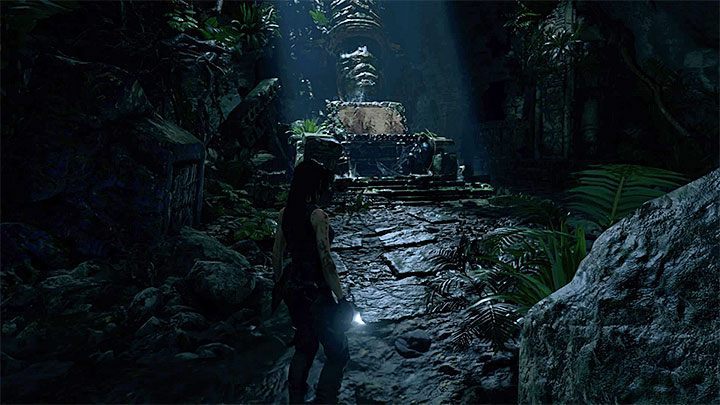 Follow the linear path through the jungle. After approaching the cliff, perform a long jump during which you must use the grappling axe to attach yourself to the climbing wall. Rappel down enter the cavern shown in the picture, in which a cut-scene will be triggered. 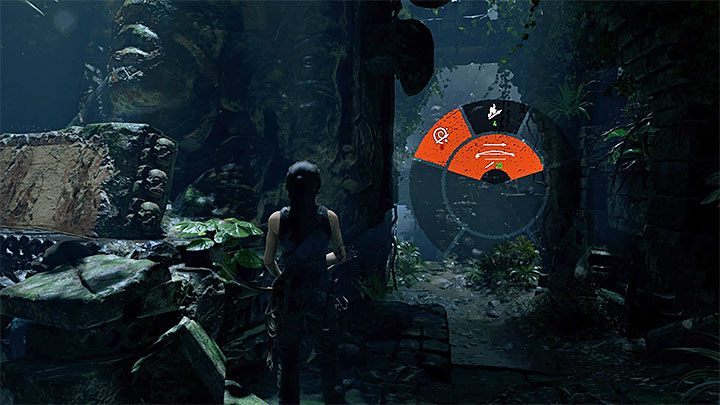 Lara will acquire a bow and a new skill - Jaguar's Fear - will be unlocked. It allows you to craft hallucinogenic arrows, which you will soon be able to test. These arrows need to be crafted (the necessary ingredients can be found in the immediate vicinity and can also be found in other locations) and then selected in the weapon menu (shown in the picture above) as alternative ammo for the bow. 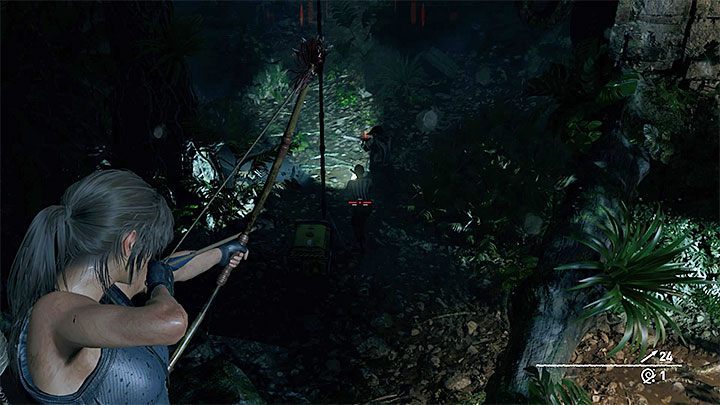 You'll encounter opponents in the next part of the jungle. It's a good idea to climb up the first tree and test the effects of the arrows of fear. Aim at one of the opponents in a group and send a hallucinogenic arrow in his direction (press the release button of the alternative arrow). A hit opponent will attack his colleagues and commit suicide afterwards.

Continue through the jungle. You can avoid or kill other mercenaries in any way you like (knife, ordinary arrows, flame arrows, hallucinogenic arrows, throwing items). During the walk you can also make things easier for yourself by climbing other trees and sabotaging other generators. The exit from the main jungle area is at the western end of the jungle. Go straight ahead and listen to a new message from Rourke (there are a lot of new secrets nearby).

Defeating Trinity forces in the refinery 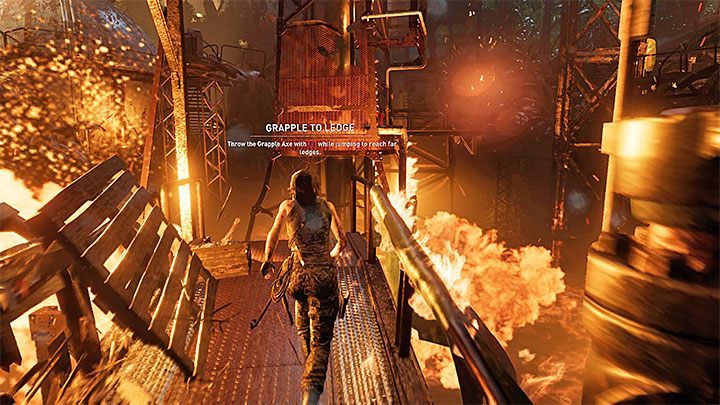 After using the bridge leading to the refinery, a cut-scene will be triggered. After it ends, a new escape sequence will take place, during which you cannot stop anywhere, because Lara will be killed by one of the mercenaries or the helicopter. Follow the imposed path and jump on the subsequent ledges of the metal structure, on which you have to climb (in order to make the first jump, shown on the picture, you need the grappling axe). The escape sequence will end when you fall into the water. As a new cut-scene is shown, Lara will acquire a heavy machine gun from one of the enemies. 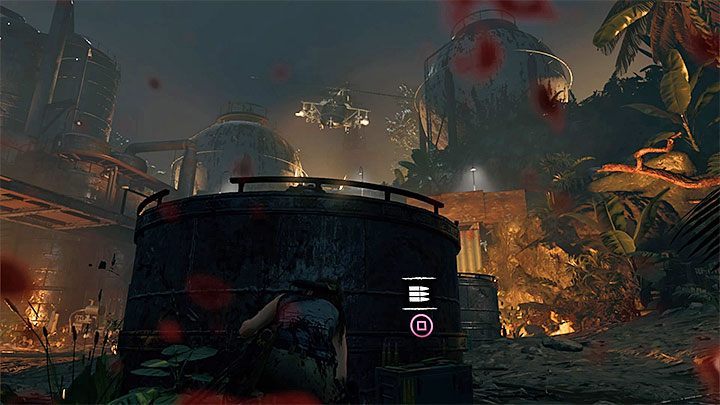 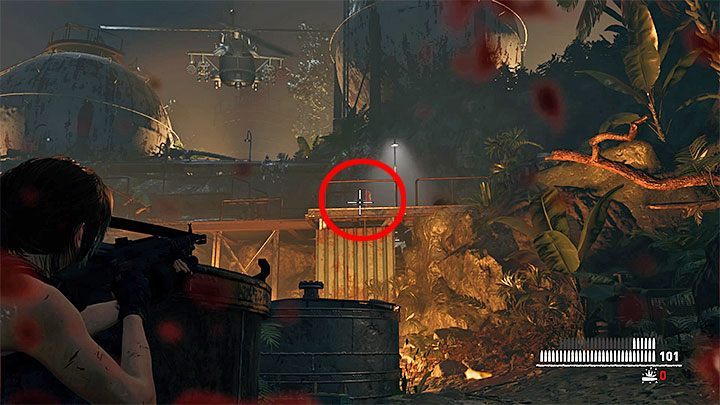 Use the newly-acquired weapon to eliminate all opposition. Target red barrels to eliminate enemies placed on balconies more easily. Try to avoid standing still in the open and, if necessary, stop behind covers.

A helicopter will appear in the next refinery area. Picture 1 shows a good hiding place (you can also find ammunition here). You have to avoid fire from the helicopter, because Lara can die very quickly. The easiest way to destroy the flying machine is to hit explosive barrels on a balcony visible in the distance - an example is shown in picture 2.

After shooting down the helicopter, you will see a cut-scene from a meeting with Jonah. The heroes will go to Mission of San Juan and you will win the Heart of the Serpent trophy.