The following page contains the walkthrough for the story mission Rebellion Lives in Shadow of the Tomb Raider. It requires you to rescue Unuratu, who was taken prisoner, which forces Lara to visit a previously unseen upper part of the Hidden City of Paititi and explore the Temple of Kukulkan. 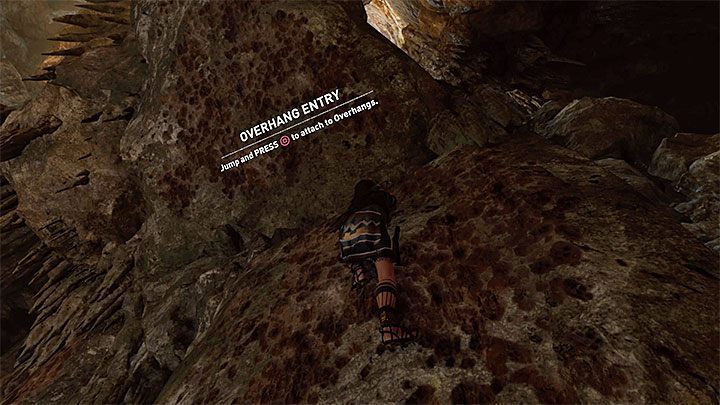 Dive and swim through the short flooded section of the cave. After reaching the shore, approach the wall. Climb it and use the axe to "fix" Lara to it. Move up and jump from the climbing wall towards the new rock shelf. Lara will find Overhang Climbing Gear in the new location, which includes, among other things, climbing boots.

The game will allow you to test the new equipment right away. Jump to the climbing wall and go up to the top. When you are in the place shown in the picture, first press the jump button, and then the button used to attach yourself to the wall with the climbing equipment. 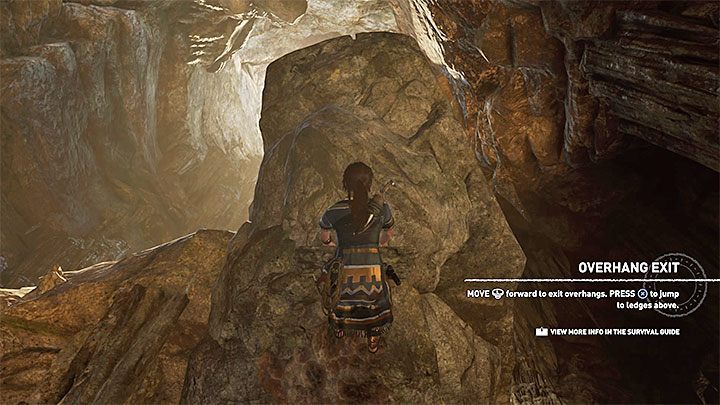 Complete the climb, finishing with an overhang under a high shelf - once you're in the section shown on the picture, press the jump button. Having finished the climb, you will unlock the New Heights trophy. 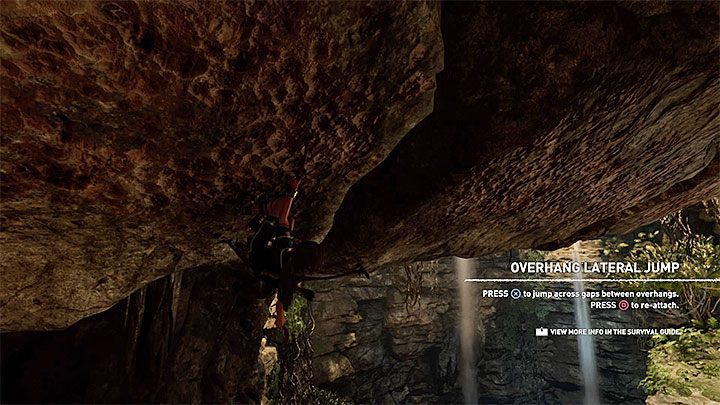 Climb into a small hole and once you have squeezed between the rocks, jump back onto the climbing wall. Just like before, you'll need the assistance of your climbing shoes - when you reach the overhand, jump and press the attachment button. Also, watch out in the place shown on the picture where you have to jump to the other "overhung" wall - it's easy to make a mistake here.

Reach the very end of the sloped climbing wall. Press the button to rappel down on the rope. After you have lowered yourself as much as possible, start swinging and jump to the new vertical climbing wall. Use it to climb to the upper shelf. 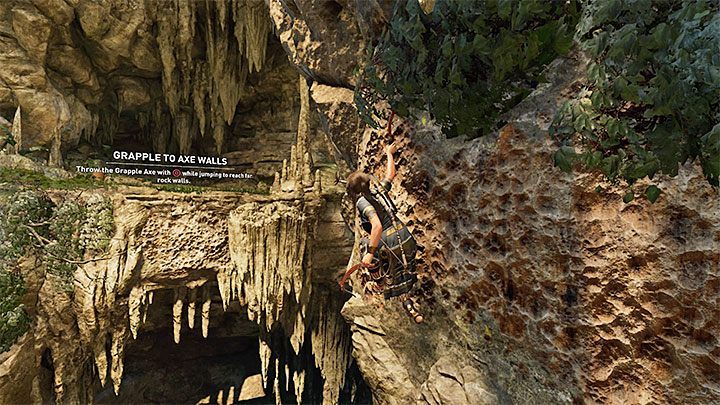 Once again jump onto a small, vertical climbing wall and jump from it on a sloping wall. Continue upwards and then to the left, using the climbing wall. Lara must be at the spot shown of the picture - use the grappling hook to get across. This will allow the heroine to catch the distant climbing wall.

Reach a new flooded cave and jump into the water. Underwater you'll have to watch out for piranhas - just like before, avoid them (use your survival instinct if available) or hide among the plants growing on the bottom. After crossing the cave, Lara will be back in the Hidden City. 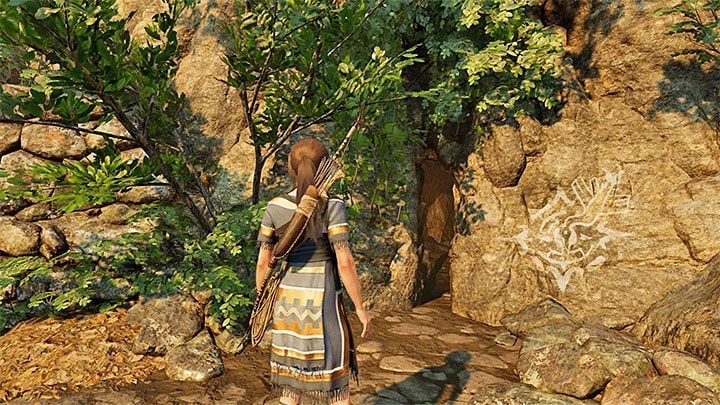 The game will initially mark Unuratu's house as the target, but after a while Jonah will contact Lara and it will be necessary to reach the rebel hideout (Skull Cave). The entrance to the cave is hidden behind the gap between the rocks - the passage is shown on the above picture.

Watch the cut-scene showing the preparations for Unuratu rescue operation. Lara will automatically acquire and wear a new outfit - Serpent Guard. Don't take it off because you'll need it to complete the quest.

Meeting with Etzli in the upper town 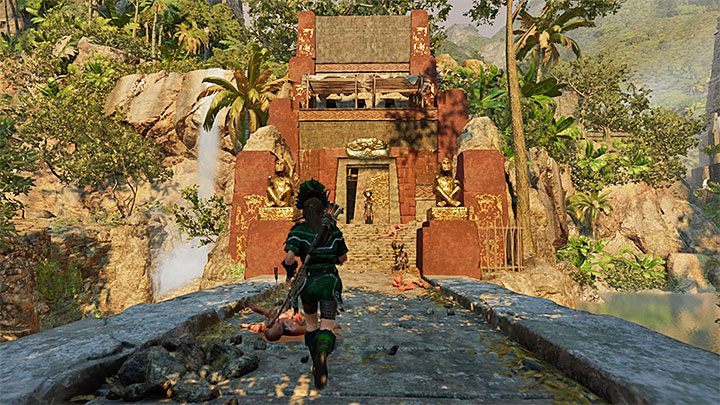 The newly unlocked outfit allows the heroine to get to the previously inaccessible upper part of Paititi. Get to the bridge leading to the upper city (picture above). Approach the guard guarding the entrance to this part of Paititi. With your outfit and the password, you can get inside (squeeze between the rocks).

In the upper city you can find new treasures and talk to new NPCs (including the merchant and a new side quest giver). The main storyline requires you to go to the highest level of the city (on the way you pass the Upper City Main Gate camp site). Reaching the marked location will trigger a conversation with Etzli.

Entering the temple of Kukulkan and finding Unuratu 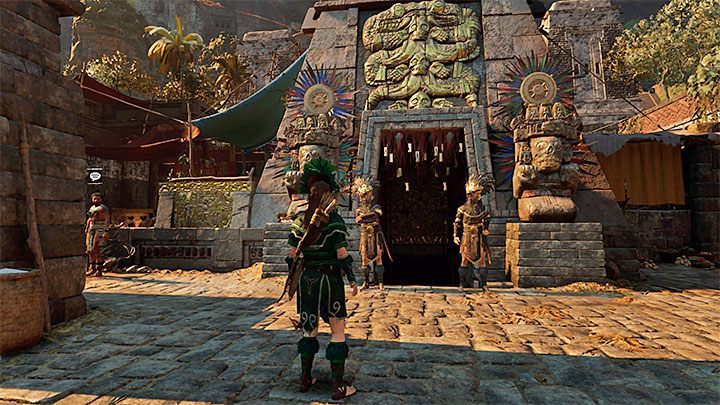 The entrance to the temple of Kukulkan is watched by two guards who were shown in the cut-scene during your meeting with Etzli (picture above). Just approach them in the guardian's outfit and let Lara speak the secret password. Go to the main chamber of the temple and watch a cut-scene involving Amaru.

There are plenty of secrets in the temple, but reaching them is optional. Choose the only further passage available. When you squeeze through the rocks, you'll find yourself in the open. 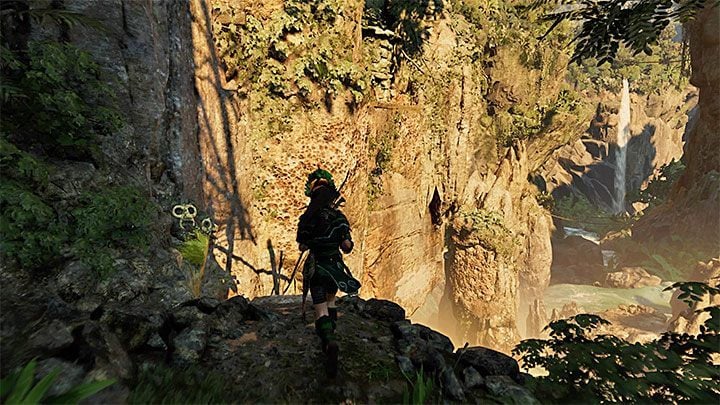 The cultists won't allow Lara to simple walk across the drawbridge and you have to get to Unuratu's cell in a different way. Take a look at the climbing wall shown in the picture. Move as far as possible to the right and only then rappel down to start running on the wall. You have to jump to the climbing wall on the right. 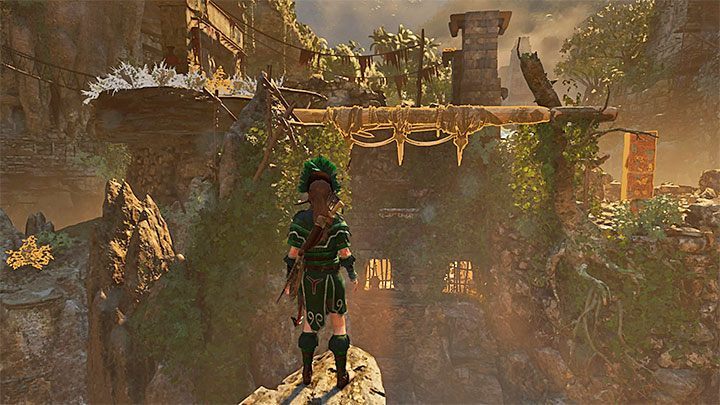 Continue climbing by using interactive ledges. Reach the highest one and only then jump to the adjacent climbing wall. After fixing yourself on it with the axe, rappel down. Swing to the sides and jump onto the area surrounded by water.

Proceed ahead and reach the new climbing wall. Climb up to the top shelf and position yourself in the place shown on the picture. Lara has to use the grappling axe and after catching the top hook, jump to the ledges adjacent to the prison. 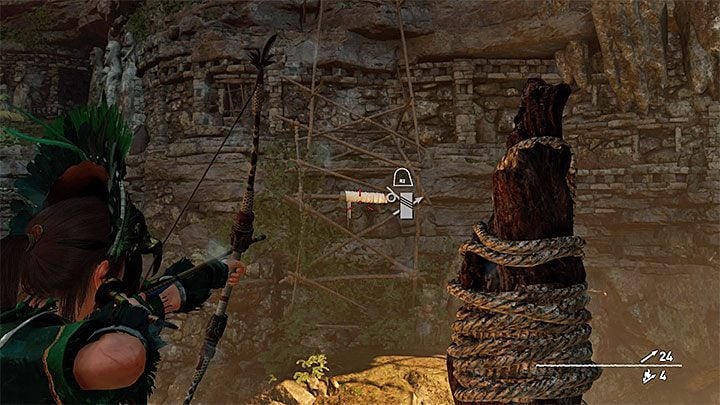 Move along the ledge until you reach the point, where you must climb another ledge. Position yourself near the rope coil and aim the bow at the nearby scaffold. You'll need to connect both elements with a rope and go across. 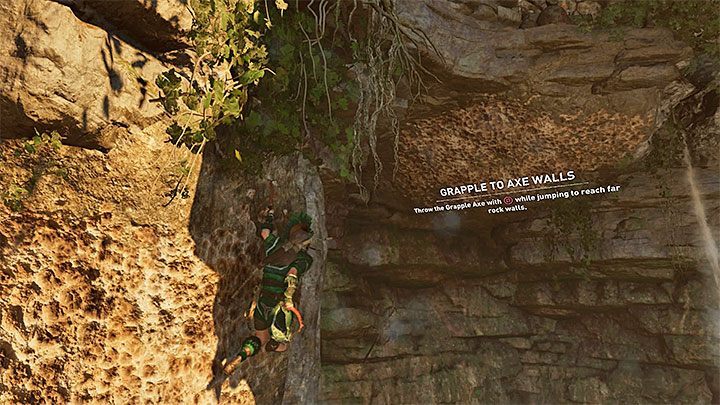 Turn towards the new ledges, located above the water. Perform a long jump towards them and latch onto the new climbing wall. A more difficult moment of the climb is shown in the picture - you have to make a jump towards the sloping climbing wall and press the use button during the jump to catch it. Pull yourself up on the rope and continue to climb the overhang using the climbing equipment you have previously acquired. 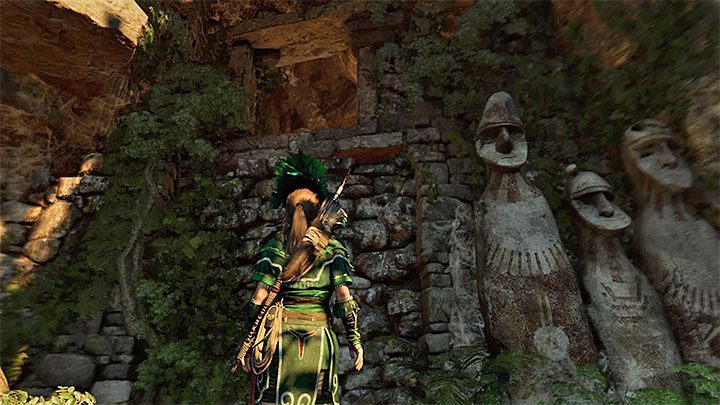 Jump on the adjacent sloping wall and complete the climb to the point where Lara can jump onto higher ledges. When you reach the new small shelf, jump onto a small opening in the wall (shown in the picture above) and you will find yourself in Unuratu's cell. You'll unlock the Family Ties trophy and complete your current mission.