This page contains description of the visit in the Mountain Temple and Cenote. Lara visits both places during Eye of the Serpent, one of the main missions in Shadow of the Tomb Raider. The heroine will have to climb a lot. However, she will also have to defeat numerous savages and solve one complex puzzle. Lastly, you will have to escape enemies - this happens during a short mission called Empty-Handed.

Going through the Mountain Temple 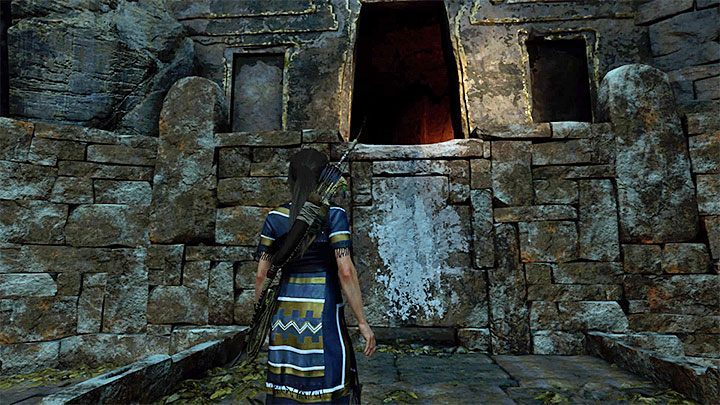 The entrance to the Mountain Temple is located next to the monolith in the north part of the Hidden City. It was previously unavailable but you can now reach the giant hole by climbing the wall.

Inside the temple, you have to reach a climbable wall. Grapple it with your axe and slide down the rope. 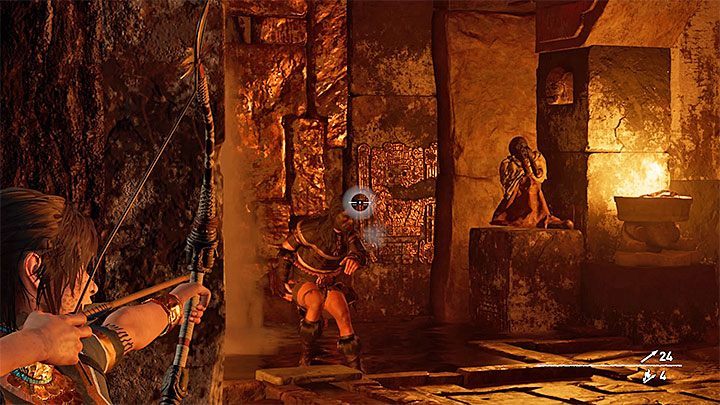 Watch a cut-scene. Continue the linear journey through the temple - Lara will have to make a few jumps and move sideways while holding a ledge. You reach the Mountain Temple Base Camp. Move forward by sliding down the rope.

Lara will have a first encounter with hostile cultists. Try to stand near walls or be on the move all the times when you are fighting with them. Also, you should aim at their heads (some of them will wear headgear). 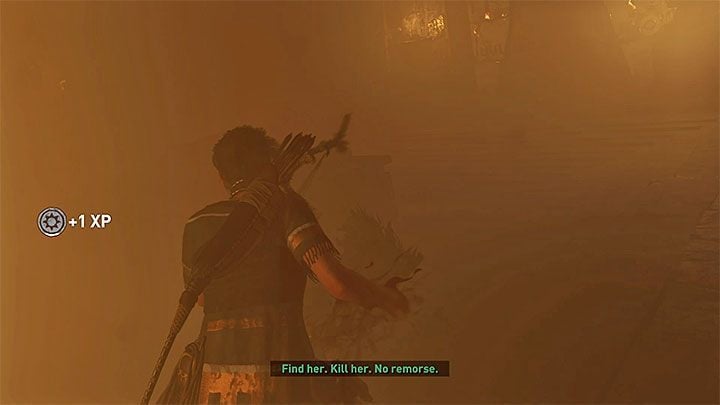 Move forward. The cultists in the next room can be attacked by surprise. You can pick up one of the jars and use it to create a Smoke Bomb (see the picture above). Throw it at the enemies to blind them temporarily and make the cultists easier to kill (from a distance or in close combat). 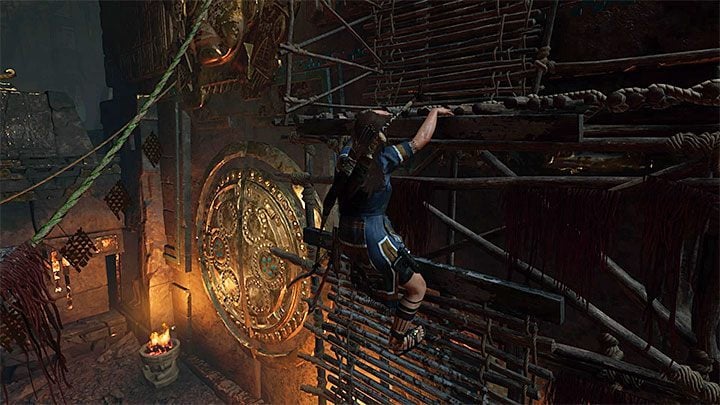 The next larger location is the one with the Great Gate. There, you will encounter more cultists (you can use a surprise attack). Look for spots with mud - Lara will camouflage herself to avoid detection. This also allows her to hide near walls covered in mud. When you are detected, try to avoid open areas and destroy red containers when enemies are standing next to them.

Climb the scaffolding located on the right side of the Great Gate - see the picture above. Watch a cut-scene - you learn that Unuratu has been kidnapped. 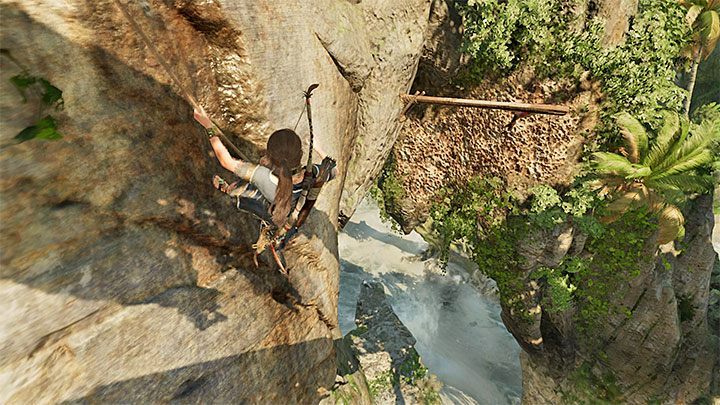 Leave the temple. Climb the wall on the right. Reach the place where you can jump towards a nearby ledge. Move to the side, reach another climbable wall and then slide down the rope. Run on the wall in the place presented in the picture above in order to reach the protruding beam. After that you will have to reach another wall (don't forget to use your axe). 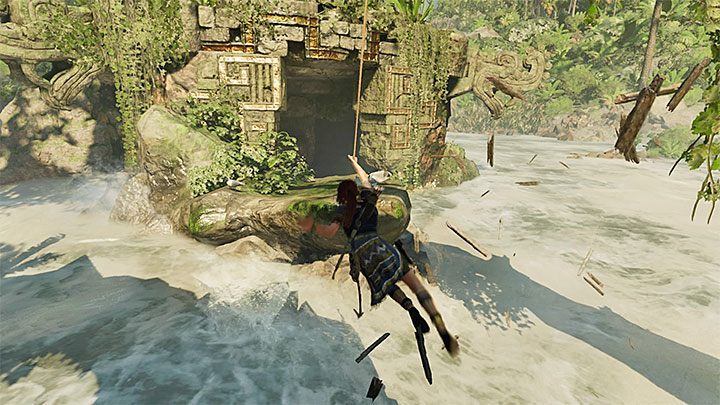 Reach the opposite side of the wall, slide down the rope and land on the stone ledge surrounded by water. Move forward. Lara must grapple the fallen tree with her axe. Do that to reach the adjacent ledge (see the picture above).

Enter the new ruins - you are now in a cave with waterfalls. Jump towards the climbable wall in the center. Then, you have to jump down into the water. Dive and swim through the submerged corridor. Get out of the water so you can climb on the upper ledges. Soon, you will reach a vantage point in a new location called Cenote. 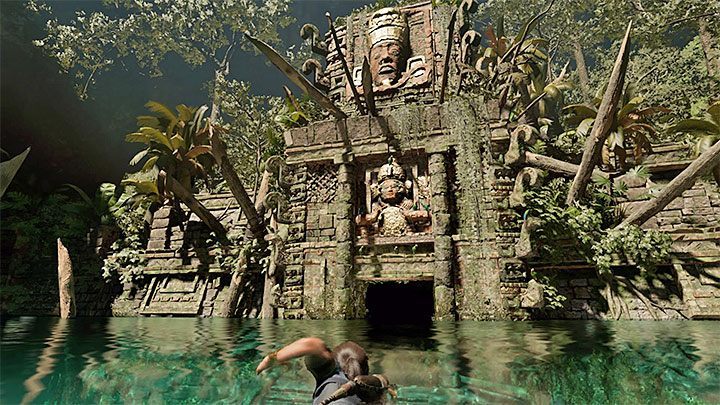 Approach the rope and catch it to reach Cenote Vista. After that you have to reach the place where Lara can jump into water from great heights.

Exploration of the new water body is optional but thanks to it you will be able to find a lot of new secrets. Swim into the ruins presented in the picture to continue the main mission. Dive and swim west. This will take you a while - remember to reach places where you can catch a breath. 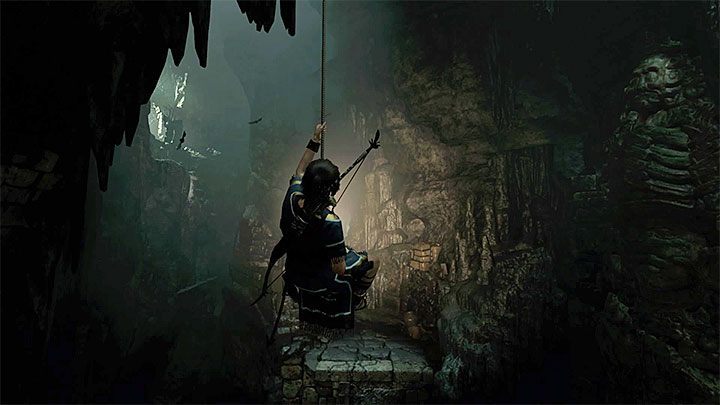 Get out from the water. Be careful here - a trap with spikes is nearby. Cut the rope to disarm it. Enter a large and dimly lit cave. Approach a climbable wall located nearby. Reach the top and then jump towards the ledge. Move to another climbable wall. Slide down the rope. Swing and then jump towards the ledge with stairs (see the picture above).

One of the challenge tombs is nearby but your objective is to keep going through the large cave. Jump towards interactive ledges and climbable walls. This isn't difficult to do but every jump must be precise so you won't fall into abyss. 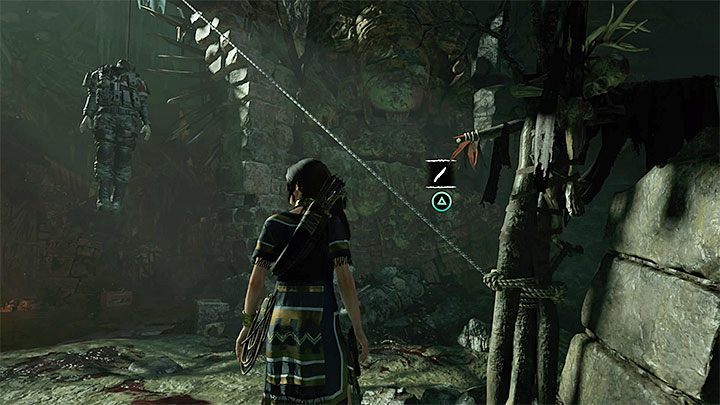 Your objective is to reach the stone ledge with a hanged person - you might have noticed the corpse right after entering the cave. Cut the rope to make the corpse fall to the ground. Lara picks up Bishop 600 shotgun.

This newly acquired shotgun can be used in attacking enemies but it also has another usage - you can destroy some of the barricades. One of them is near the Cenote Temple Ruins camp. Shoot the barricade to unlock a new passage. 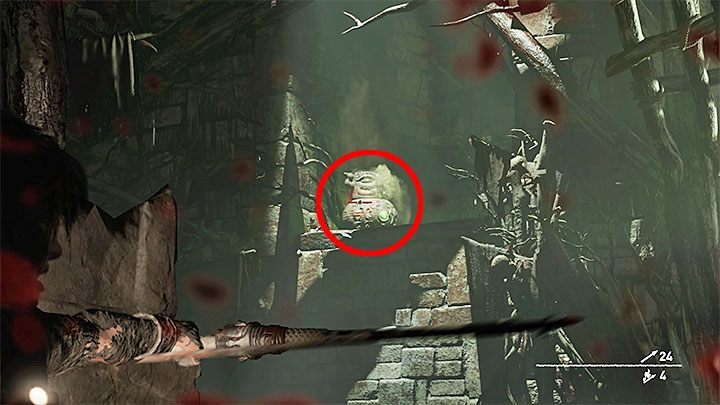 Follow the linear path. Soon, Lara will have her first encounter with savages. Fights with these "monsters" have the same general rules: 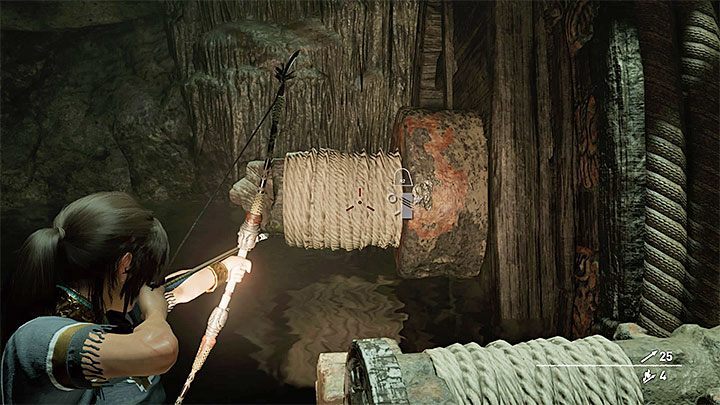 Find a wall that Lara can climb. Soon, you will reach a construction with a handwheel. Aim at the ropes presented in the picture above and connect both elements of the construction. After that you can start rotating the handwheel. 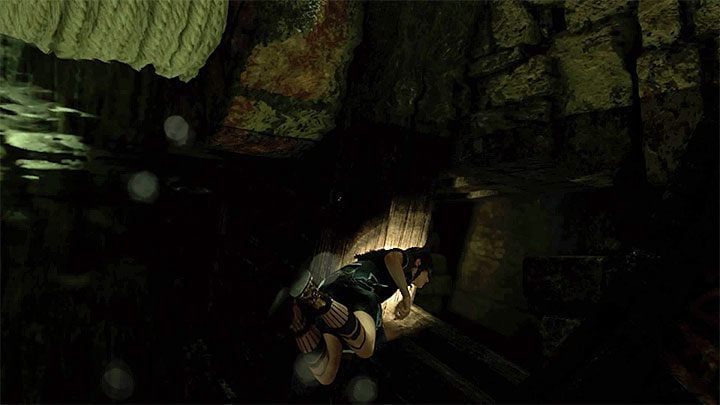 The mechanism is partially blocked. Jump into water, dive and find the obstacle which has to be removed with the axe. Go back to the handwheel. Move it in a such way that would allow Lara to swim through a small hole - see the picture above. 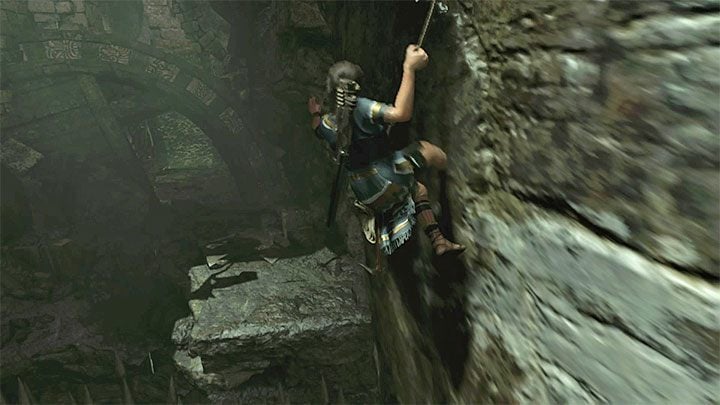 Reach the surface and start with disarming a new trap (cut the rope). Move towards the edge of the stone ledge and jump towards the wall. Grapple it with your axe. Slide down the rope and then start running on the wall. Lara must jump towards the bigger ledge (presented in the picture).

Move forward. Follow the corridor until you reach a small wall that you can climb. Grapple it with your axe and then slide down the rope to reach a much bigger room. Here, you must complete a puzzle that requires you to open two large gates (the first gate can be seen in the distance, the other is hidden behind the first one). 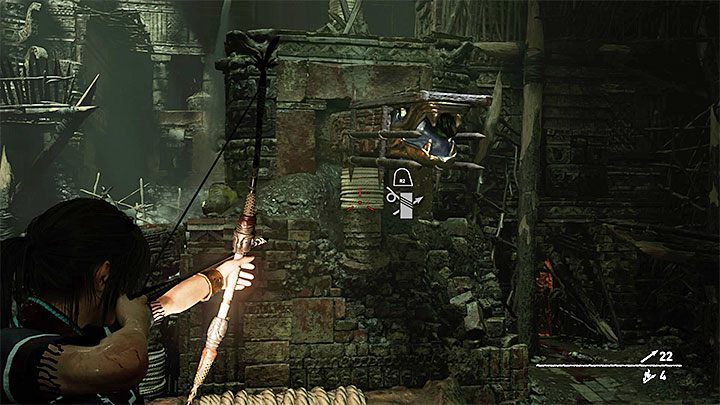 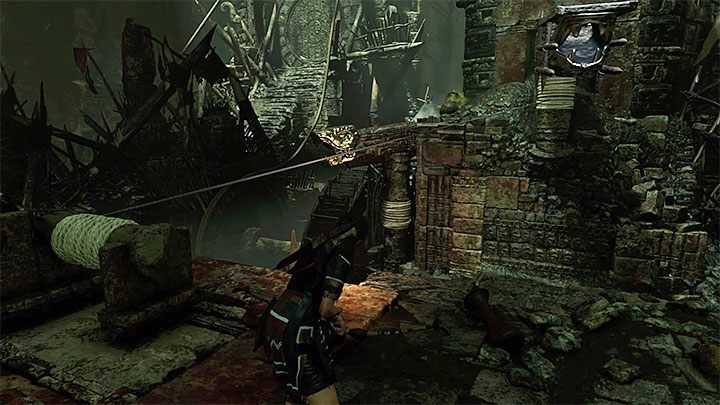 Let go the rope. Swim towards the ledge located on the right side of the gate. Follow the linear path - it will take you to the upper part of the room. Be ready to eliminate a few savages who will attack Lara. 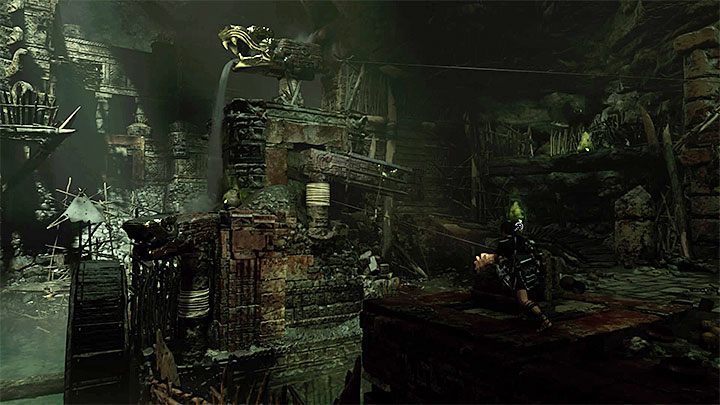 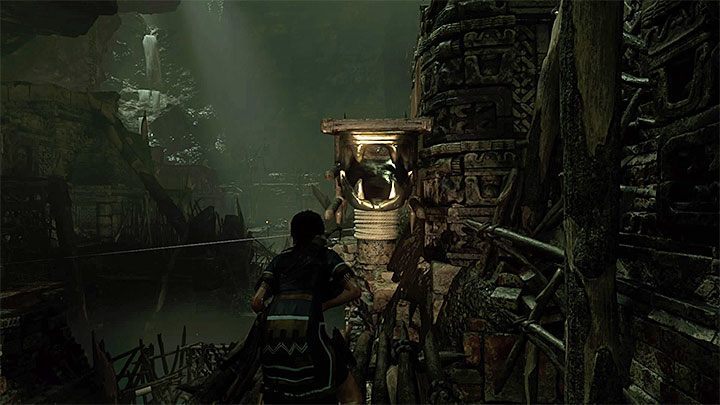 Rotate the spinning wheel to move the construction with a serpent's head to the right (the picture 1). You can now climb it (the picture 2). Thanks to that you can access the previously unavailable ledge. 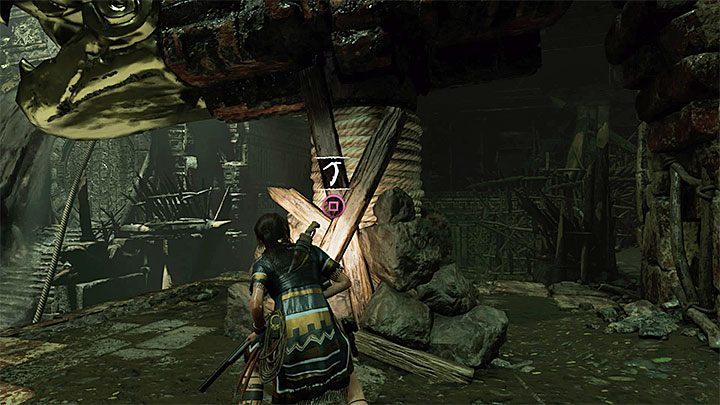 The upper construction with a serpent is blocked with boards. Use your axe to remove them. 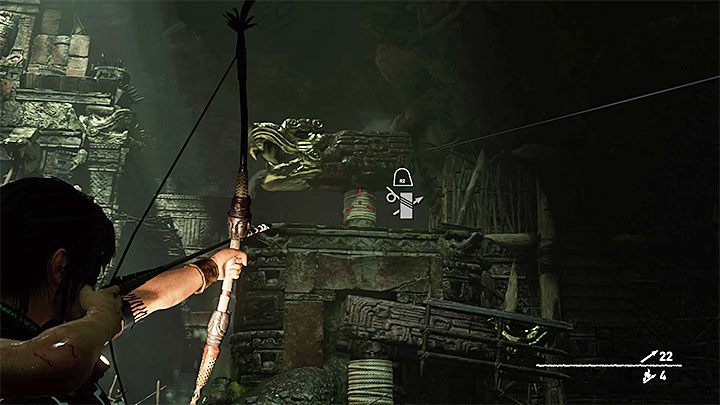 Go back to the spinning wheel. Shoot an arrow at the newly unlocked construction (see the picture above). 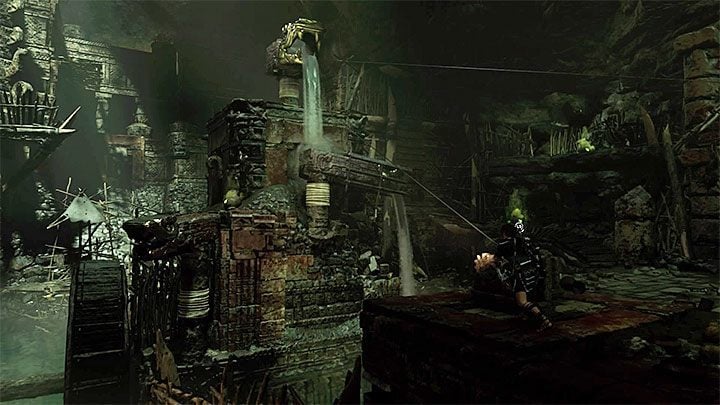 Use the spinning wheel to start moving the upper construction with a serpent's head. This construction must reach the place presented in the picture - thanks to that the water will start flowing into the construction in the middle. 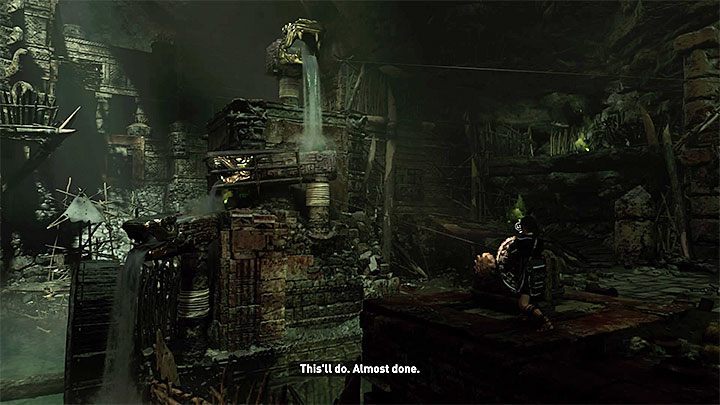 Cut the rope attached to the upper construction and then shoot another arrow with a rope at the construction in the middle (the one on which you have climbed earlier). Use the spinning wheel to move the middle construction to the left - see the picture above. 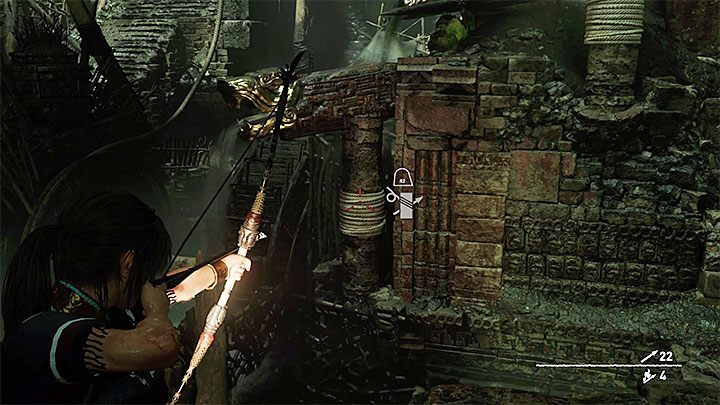 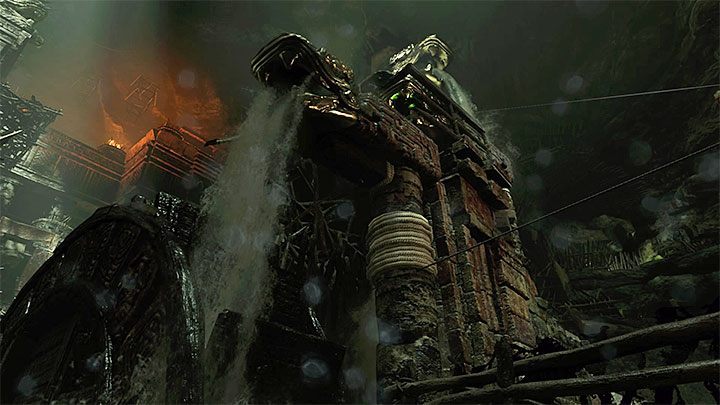 Cut the rope again. Now, you have to connect the lower construction with a serpent's head with the spinning wheel (see the picture 1). Start rotating the mechanism. This construction has to be moved to the place where the falling water will be able to move the wheel (the picture 2). This raises the large gate. Get rid of the savages before you move to the next mechanism. 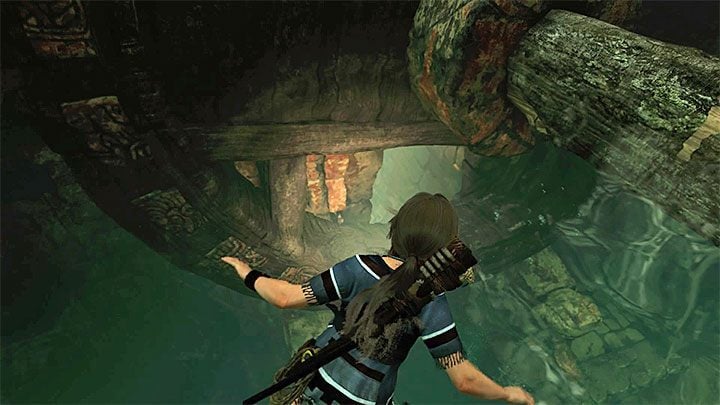 Jump into water and then dive. Wait until you can see a whole in the rotating mechanism (the picture above). Swim through that hole. Reach the place where you can get out of the water. Follow the linear path and reach another spinning wheel (it is located left from the gate). You will be attacked by a group of savages. 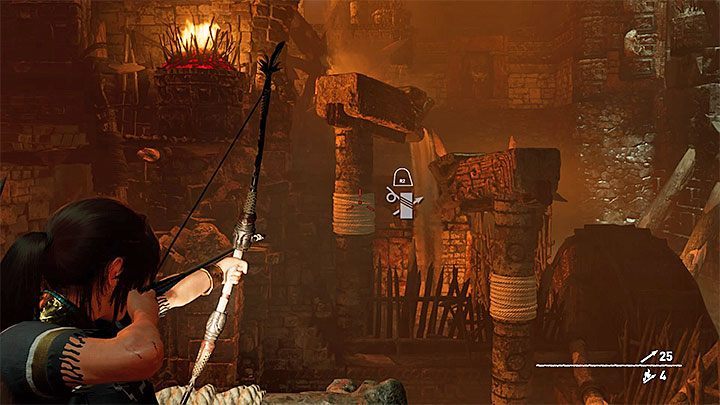 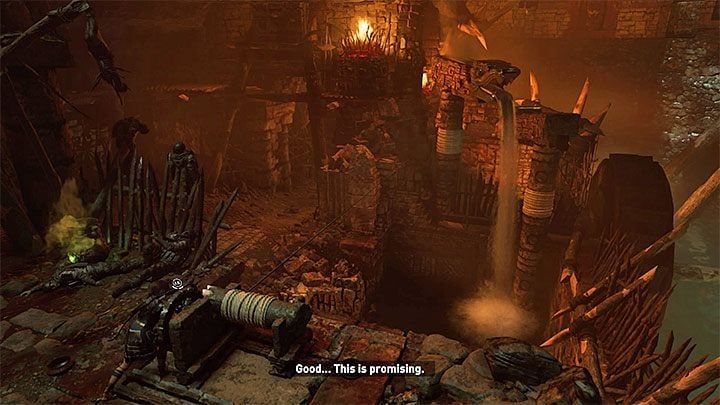 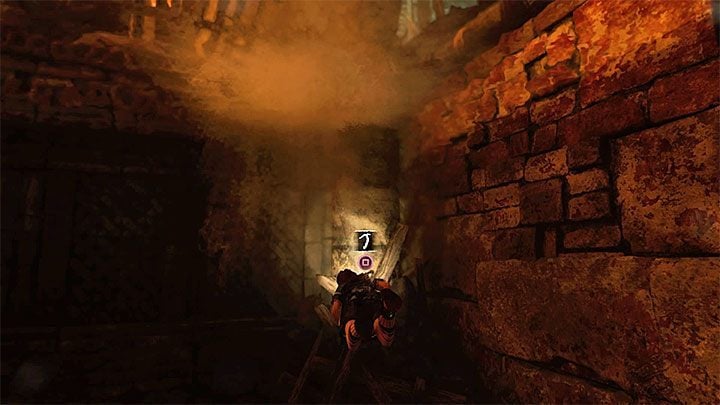 Jump into the newly created water body and then dive. Remove the boards that block the shorter construction with a serpent's head. 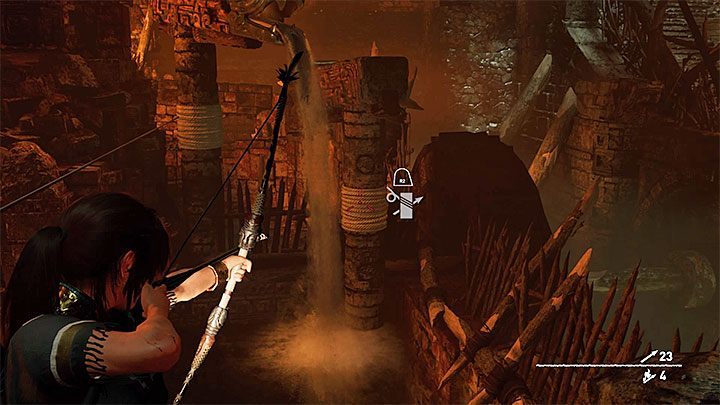 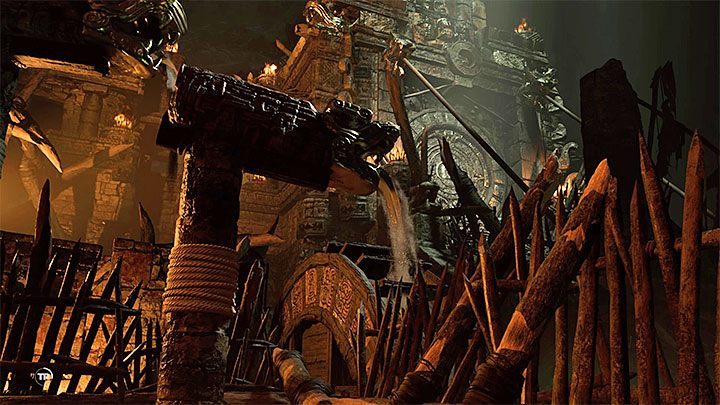 The last thing to do is to adjust the position of the taller construction. You have to create a waterfall - water has to flow on the shorter construction and from there it has to flow on the wheel (see the picture above). This raises the second gate - the puzzle is solved. This triggers a cut-scene during which you will meet Yaaxil, the queen of the damned. 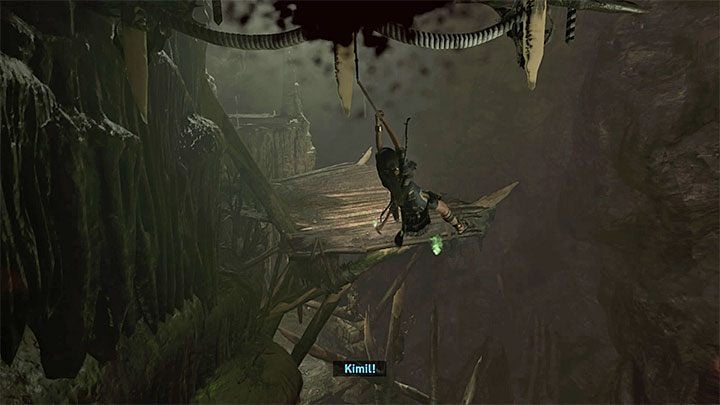 The escape sequence is very similar to the one from the previous main mission. Do not try to battle the savages and do not stop, as Lara will be quickly overrun and killed.

The escape follows a predefined route, but it's not a walk in the park, and some skills will be required. You'll need to jump, grab ledges, and use the grappling axe to swing using attachment points on the ceiling (see example on the screenshot). A successful flight will end with falling into water. You'll unlock The Underworld achievement.