In Shadow of the Tomb Raider, you'll find yourself in the Mission of San Juan - the last location available in the game. You'll find two challenge tombs in this zone. They will occur during your exploration of the area. 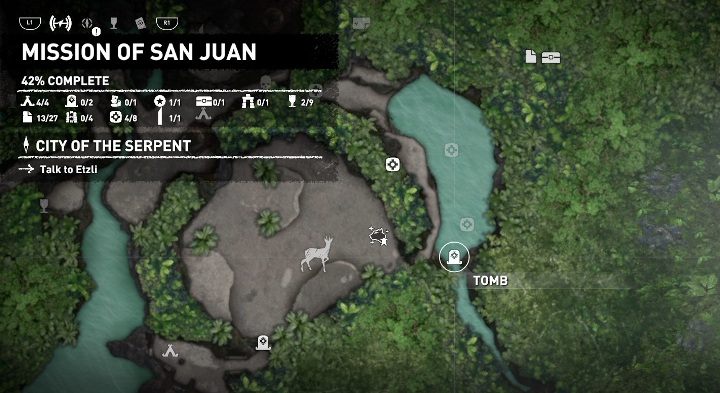 The Thirsty Gods tomb can be found in the eastern part of the location, in the middle of the lake. In order to get to it you have to take a long dive under water. However, the road is straight and there are no opponents in it. 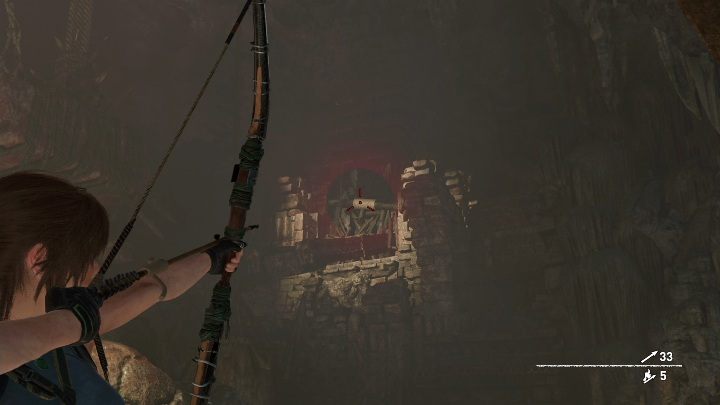 When you reach a closed room full of water, you have to break the gates so that the water can flow out. To do this, take your bow and shoot an arrow in the direction of the rope knot. This way Lara will pull the rope and break the boards blocking the passage. After this, the water level will drop. 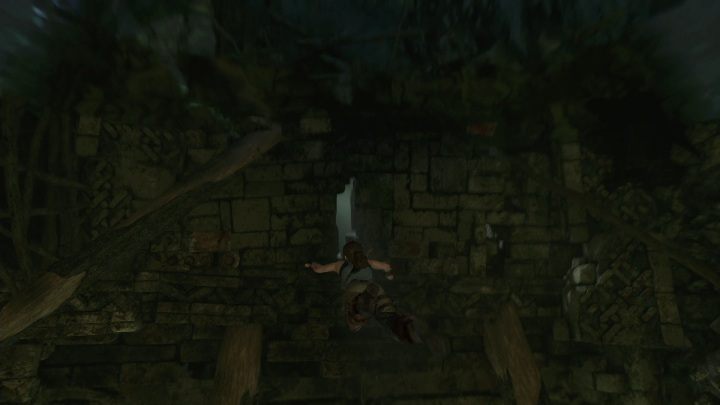 The water current will drag you into the next room. There you will have to cross the gap to get to the puzzle. 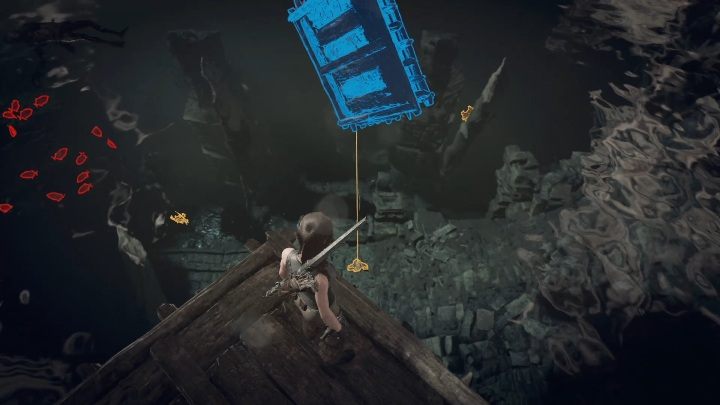 Your first task will be to cut off the ropes from the raft. To do this, you must dive and cut off the ropes. However, you have to be careful, because there are piranhas in the water. If they catch you, you have little chances of survival. 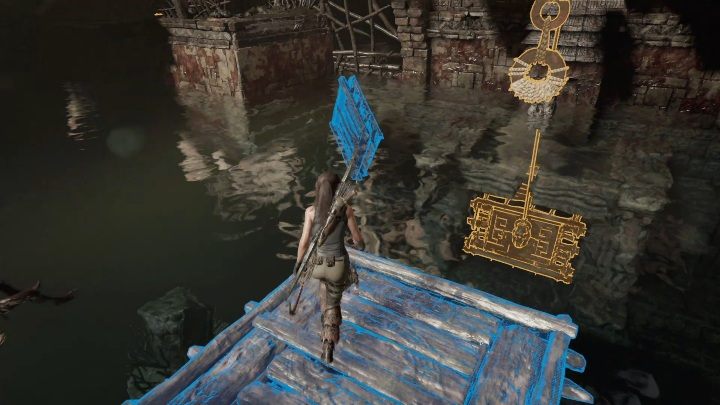 To release the second raft you have to dive and enter a small cave. The rope holding the raft is hidden there. When you cut the rope you use it to jump on the rocks, and from there go on to the second part of the riddle. 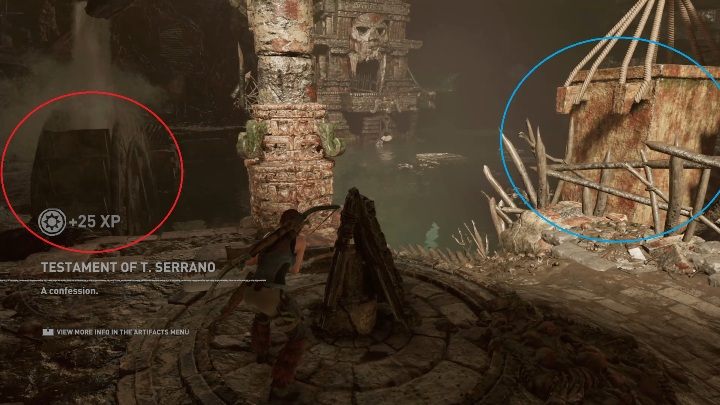 There is a machine waiting for you. You have to direct it so that the water flies into the bucket (marked blue in the screen), then quickly rotate it to the mill (marked red), and then move it so that it flies into the water - but it can't touch either the bucket or the mill. This way you will be able to move freely to the newly opened passage - it will not close under the influence of water. 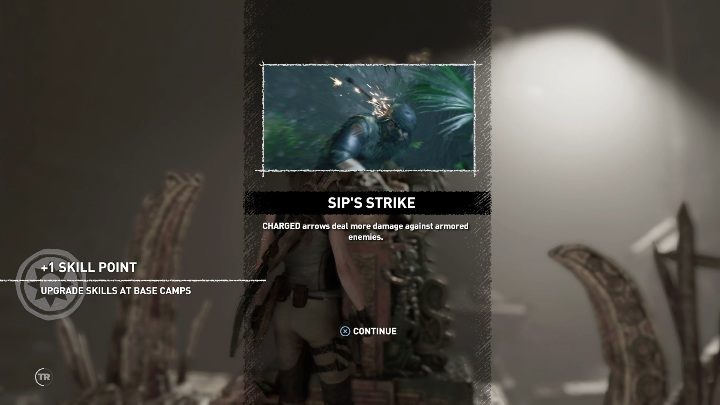 From this tomb of challenges, you will get a Sip's Strike. It increases the damage dealt by a "mighty shot" to armored enemies. A mighty shot is one of Lara's abilities related with the bow. 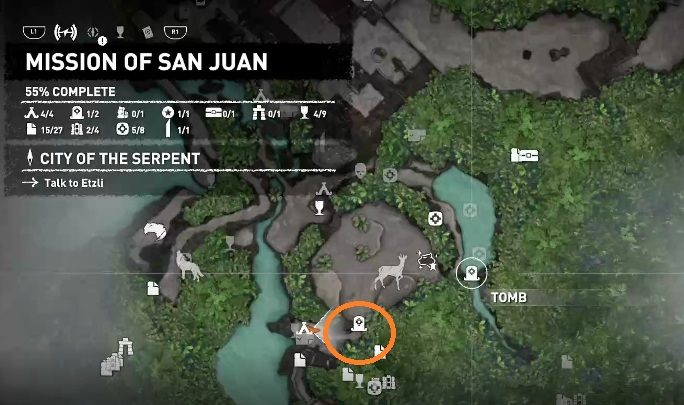 Tree of life tomb is located in the western part of the location. This is one of the most complex and complicated objects in Shadow of the Tomb Raider. This tomb has many enemies and a lot of traps. 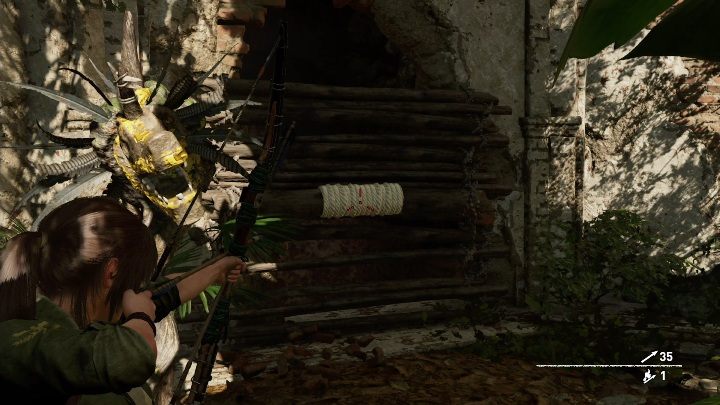 To open your way into the tomb, you must destroy the entrance with a bow. All you need to do is aim at the rope and Lara will tear out the beams that obstruct the passage. Your next task will be to go downhill on the rocks. 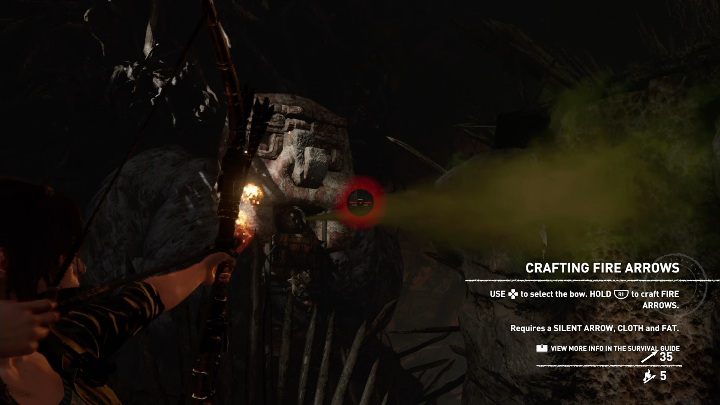 This is the first time you will meet poisonous traps, in order to destroy them you have to shoot them with fire arrows. 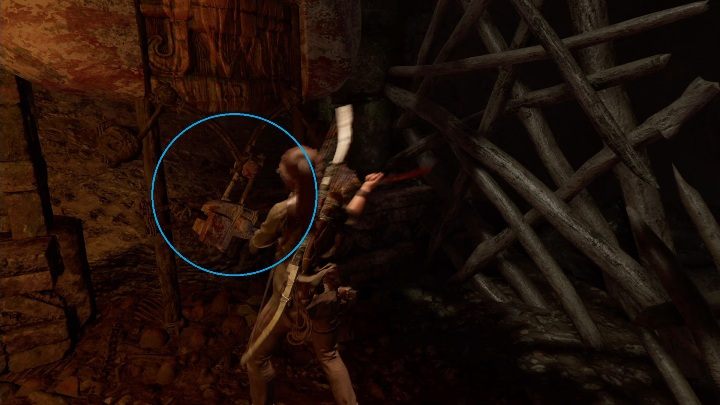 To activate the traps you must open the machines with your axe. This will unleash a trap and you will be able to shoot an arrow in the direction of the trap. This will open a passageway for you. 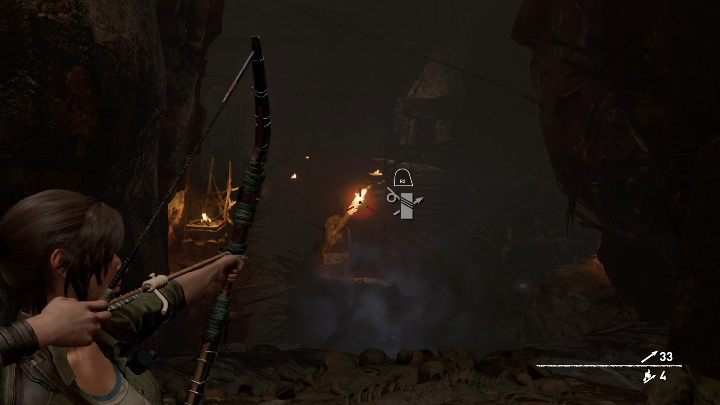 Follow the path. In order to jump over the cliff you have to connect the ropes. In the screen above we've shown where the second rope strand is located. When you connect them together Lara is able to get to the other side of the cave. 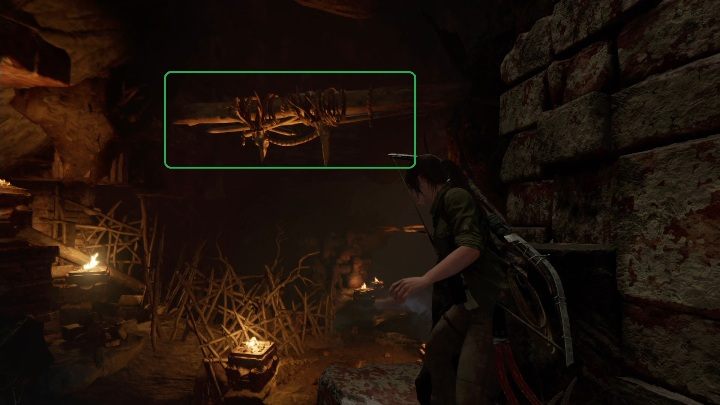 Then the path will lead you along the rocks. Move on pieces of rocks and bales. From time to time you will have to jump using a rope with your axe. 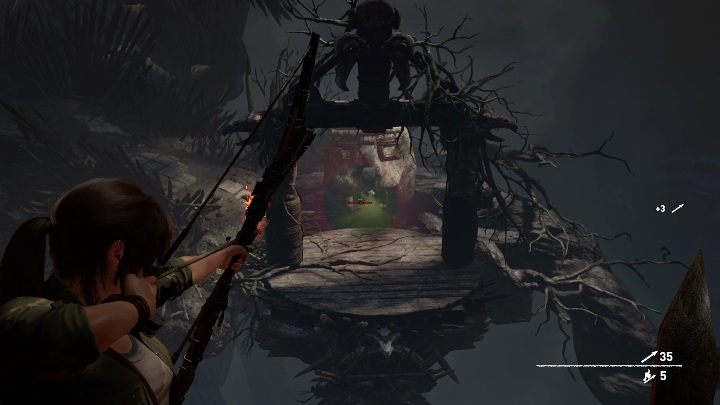 Following the path you will find another trap. When you shoot at it, the platform will move to you. Jump on it quickly and go to the other side of the cave. 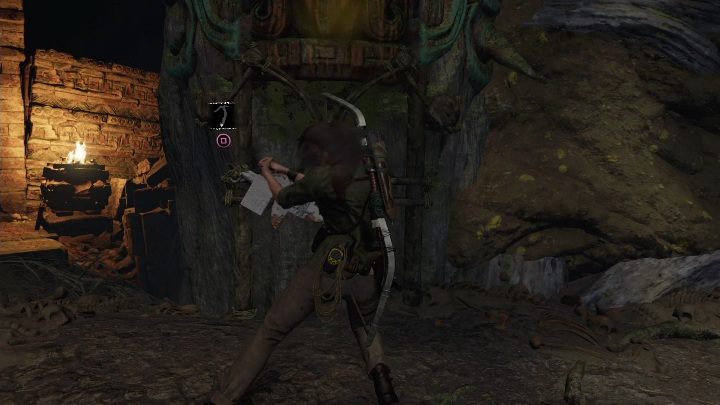 To go further you have to go down and use a machine. When you do this, your opponents will jump out. Kill them all otherwise they will not allow you to go further. 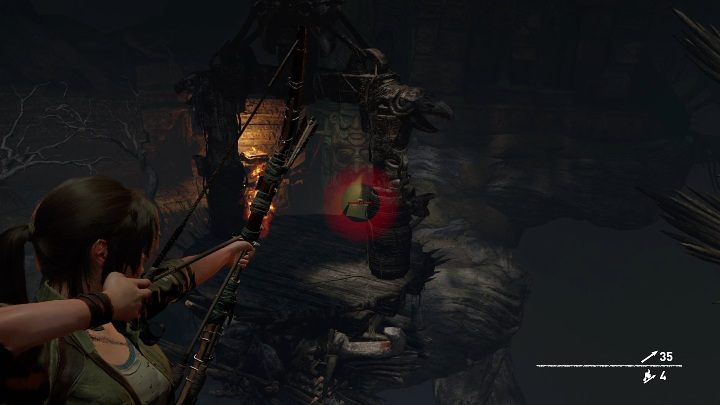 After killing your opponents, return to the top and shoot down the trap. This way, the platform will slide down. You will be able to jump to the next side of the tomb. 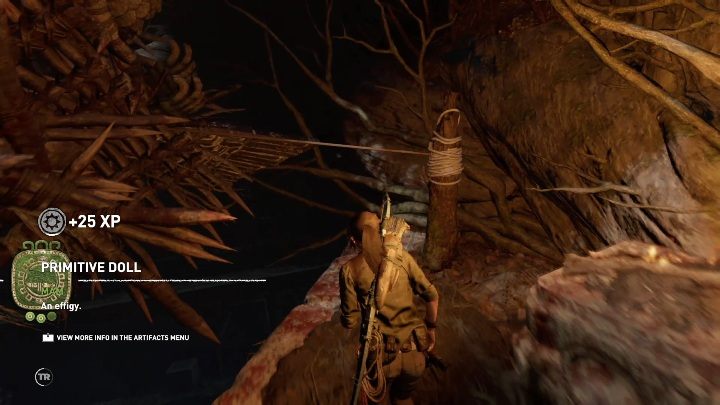 Continuing your way you will find a blocked platform. In order to unlock it you have to cut the rope. Then jump over the platforms to the next part of the cave. Start the machine that stands there. This will trigger the trap, but also spawn a group of enemies to the cave. Kill them all and return to the platform. From there, shoot the trap, this way Lara will fall down with the platforms. There, you will be attacked by enemies once more. Get rid of them. Then, run up again. 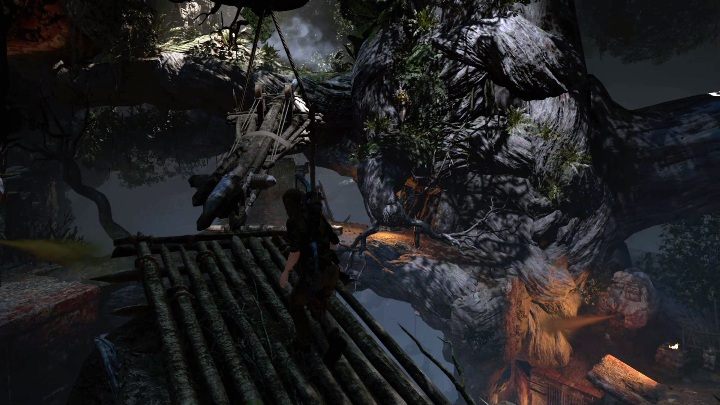 After returning to the top you can jump on a bridge made of boards. After passing it you will get to the chapel. There you will acquire a Kinich Ahau's Boon skill. This skill provides immediate regeneration of Lara's health during combat. It works once and regenerates between battles.