The Peruvian Jungle in Shadow of the Tomb Raider contains two locations called the Challenge Tombs. Both are on the eastern side of the map. One in the northern and the other in the southern end. A challenge tomb has strict requirements for its completion. To complete one you must read the inscriptions on the shrine, which in turn will give you special skills.

The following page contains information about all the challenge tombs appearing in Shadow of the Tomb Raider's location called the Peruvian Jungle. We described what to do to get to the shrine and what skills are awarded for completing particular challenge tombs. 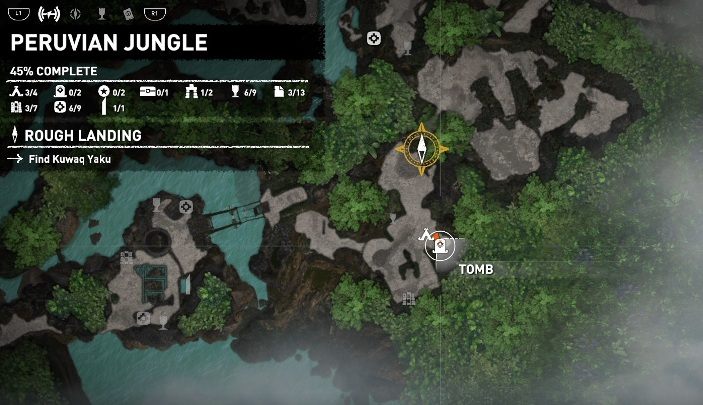 Following the plot of Shadow of the Tomb Raider, you will encounter your first challenge tomb in Peruvian Jungle on the south-eastern edge of the map. The challenge tomb icon will appear when you get close or reveal the map. Maps showing some points of interest in Shadow of Tomb Raider can be found in leather backpacks scattered around the map in caves. 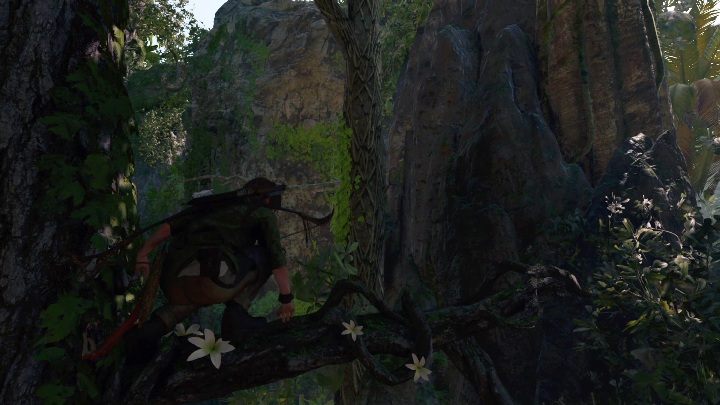 Upon entering the tomb, you will encounter a pool. You cannot jump into it, though. To be able to go across, you'll need to go up - climb a tree branch and jump on the climbable wall on the right. 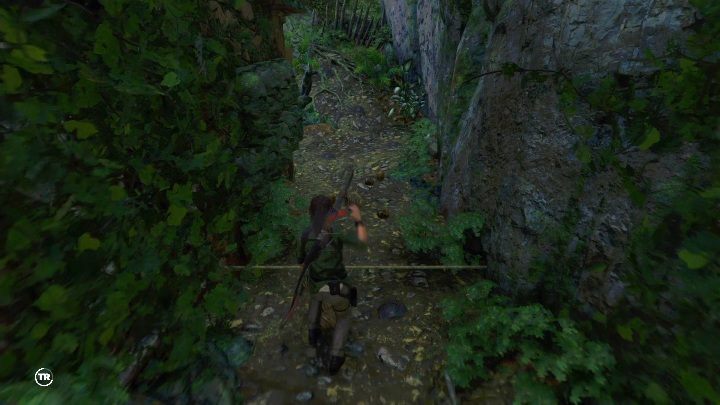 On the other side of the cave you will encounter a path full of traps. Watch your step and disarm whatever you can. Follow the wall on the right, and you will reach another cliff. 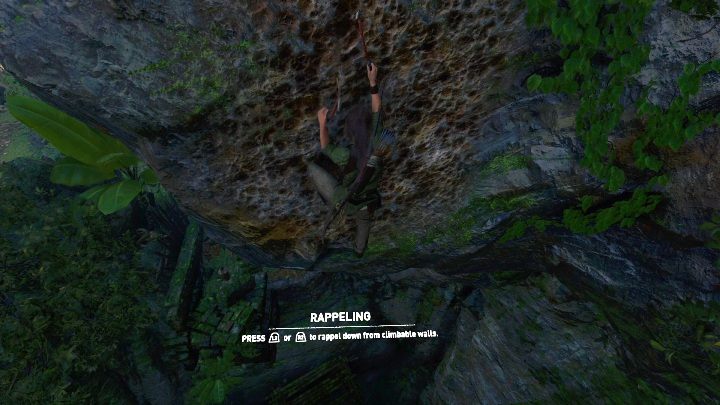 The cliff can be crossed using trees. Once on the other side, use the climbing axe to anchor yourself on the wall, and rappel down using the rope. Swing a bit, and use the momentum to jump on a stable rock ledge. Repeat the same procedure a bit further, and until you've cleared the cliffs. 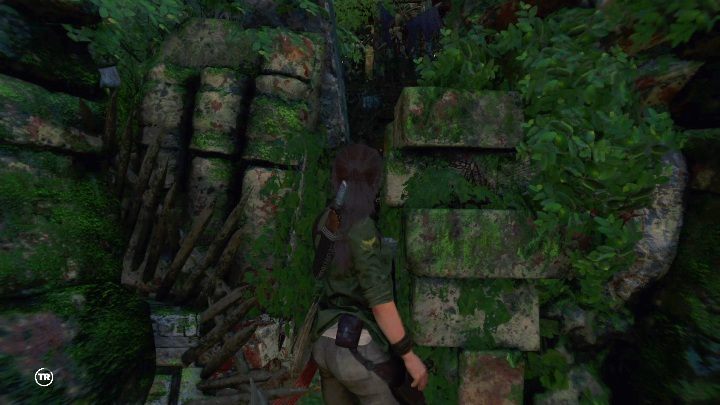 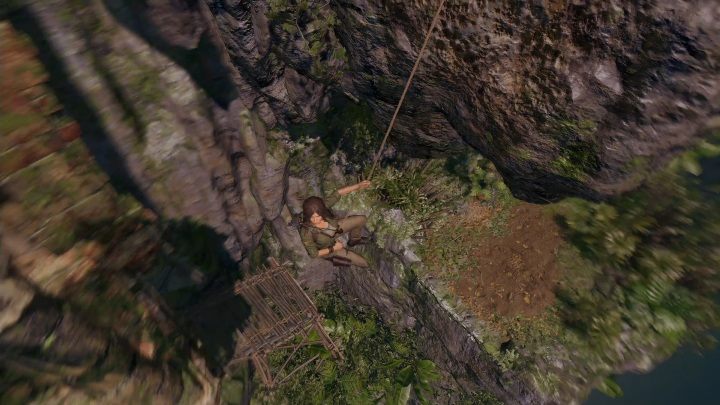 Once you're in the open, head left. Climb the rocks you've found there and the rappel down using the rope. Lower yourself as much as you can, swing and jump on a nearby rock ledge. 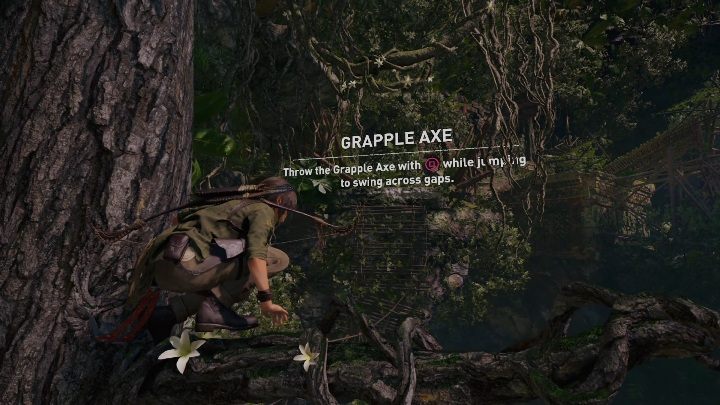 From there climb on a branch. Now, jump and throw your grapple axe to gain the momentum necessary to get across. 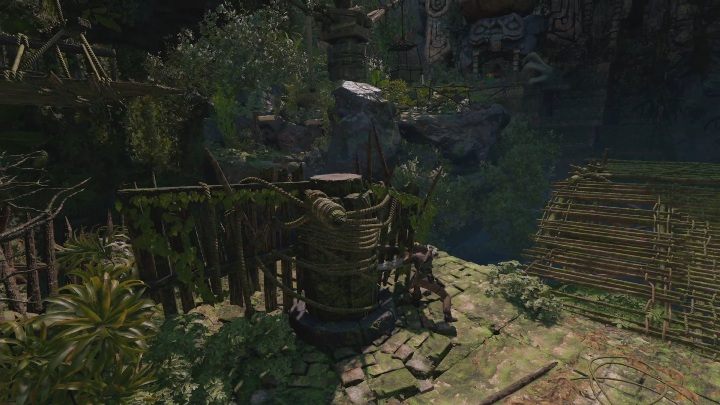 On the other side, you will encounter a puzzle. First thing you need to do is to move a large mechanism. Set it so that the reel with rope is lined with the wooden bridge. Then, stand near the rope and shoot a rope arrow on the other side. This will enable you to cross to the other side. 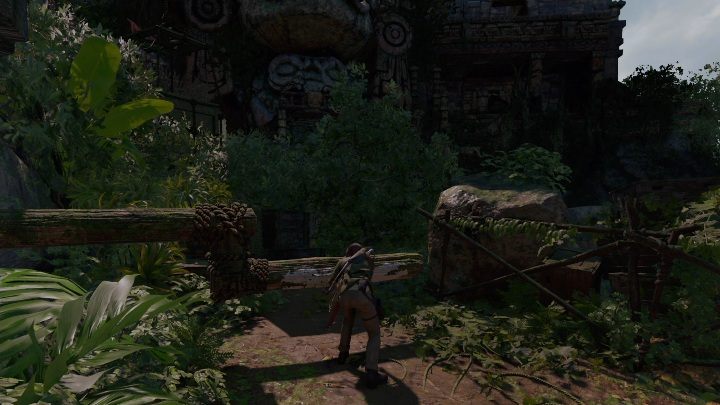 Once there, cut the rope and approach the ancient mechanism. Grab the moving element and move it. You've just activated an ancient crane, which will bring a crate for you, from which you can get back to the other side. Jump across the crate and return to the first mechanism. 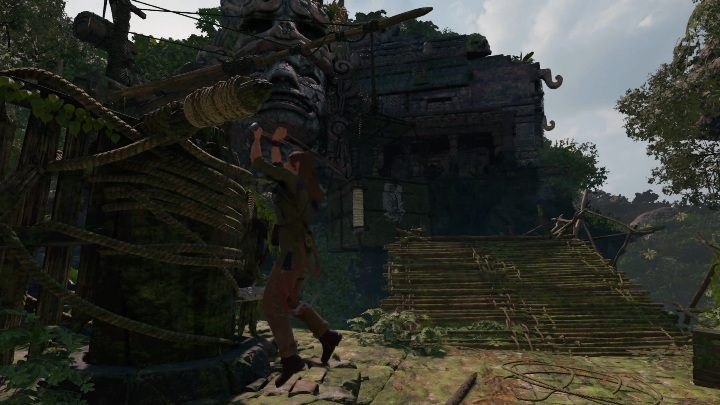 Move the mechanism once again, the use the rope to connect the crate and the mechanics. Once you do it, return on the other side and move the arm of the crane. This will cause the crate to swing - you'll have to jump on it, and from there reach a nearby rock shelf. 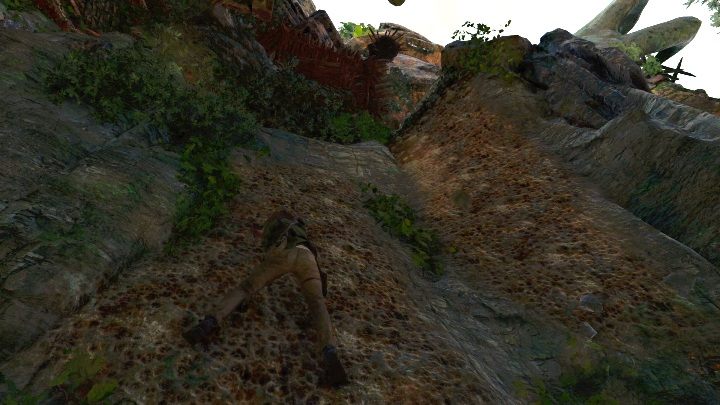 On the other side of the cave you will find an area covered with secrets. You will find a lot of components, gold and raw materials. Once you've picked up everything you're interested in, proceed ahead. You will have to jump on a rock shelf, which will automatically destroy itself. Lara will fall, but she will hold onto another shelf. From there you have to jump on the rocks and use them to climb up the mountain. When you're climbing the rocks look up, as sharp traps may fall on you and instantly kill the heroine 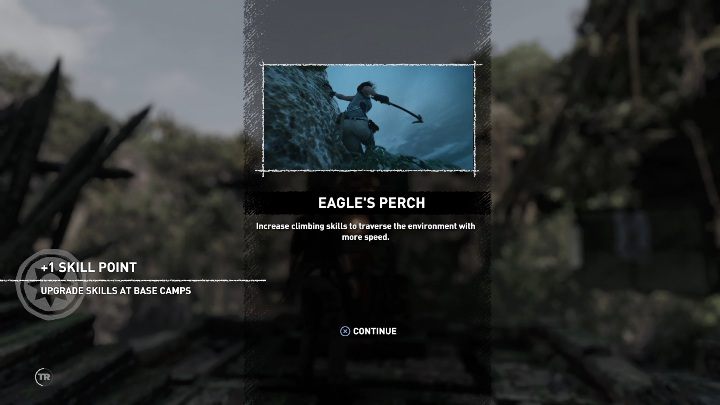 The shrine is located on the top. Once you activate it, you'll unlock the Eagle's perch skill - it increases your climbing speed. 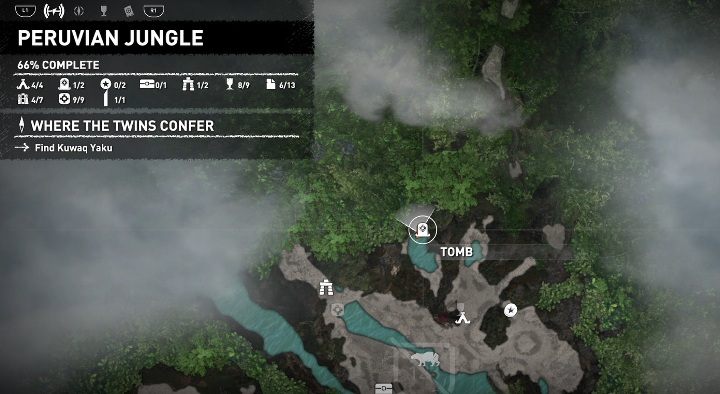 Following the plot of Shadow of the Tomb Raider, you will encounter your second challenge tomb in Peruvian Jungle on the north-eastern edge of the map. The challenge tomb icon will appear when you get close or reveal the map. To reach this particular tomb, you'll have to swim a bit, but there are no enemies in the water this time. 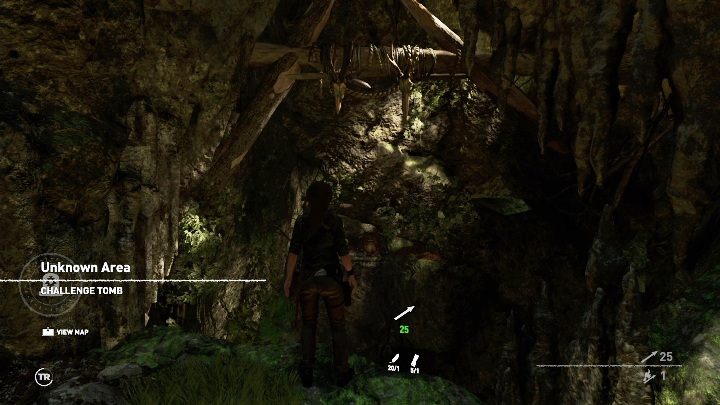 To enter the location you'll need to break some rocks that block the entrance. Once inside, you'll see a cliff. You can either jump straight into the water, or use your climbing axe to jump across the other side. Both actions will yield the same result - Lara will be unable to get a hold on the wall and slip into the water. She won't lose any health points, though. 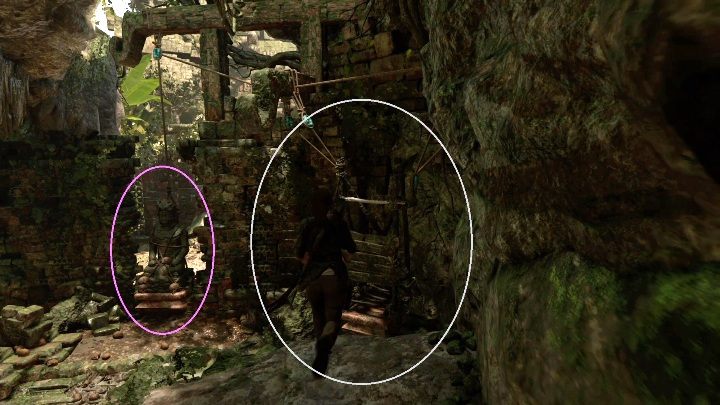 Once you get out of the water, you'll encounter a blocked passage. To be able to proceed, you'll have to jump on the lift (marked in grey). The statue (violet) will be lifted and reveal a passage. 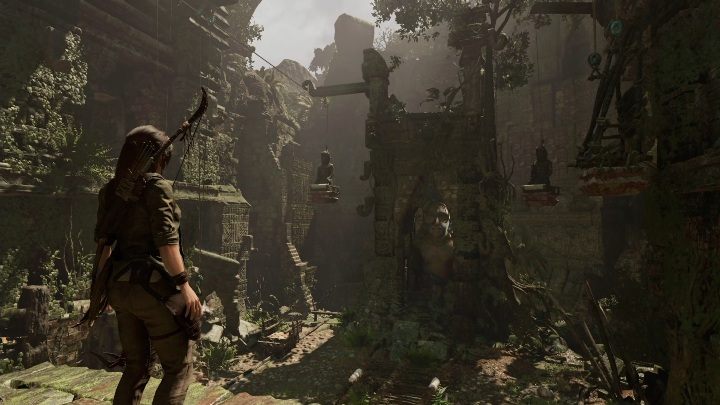 On the other side, you'll encounter a puzzle. Your task will be to lift the destroyed element. To do this, you'll need to use the stone statues and carts. 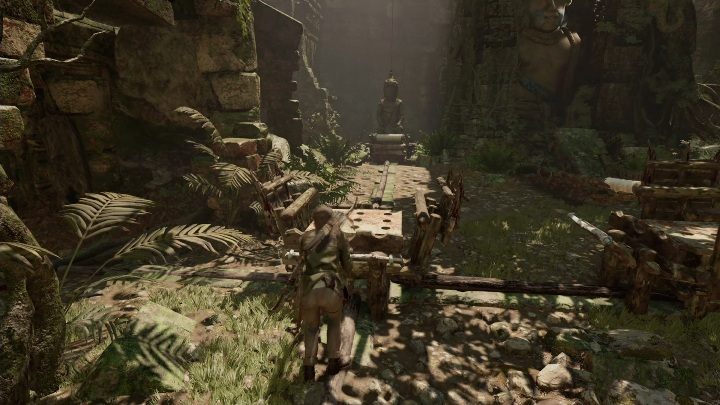 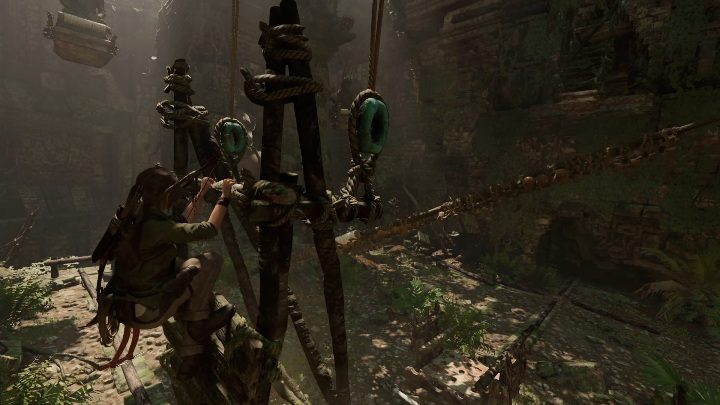 Once you're done with this part of the puzzle, climb higher and jump down on the lift. This will lift the statue along with the element of the structure. 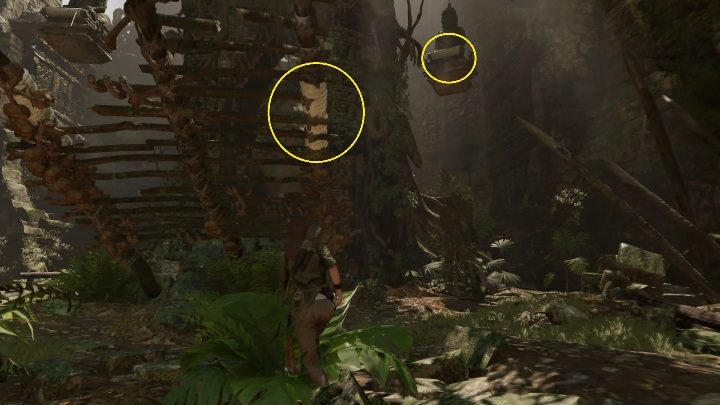 When the section is lifted, push the first cart on the other side. The, connect the two fragments shown on the screenshot above. Your next task is to climb to the upper level and use the lift. This will lift the entire element, enabling you to climb it and proceed. 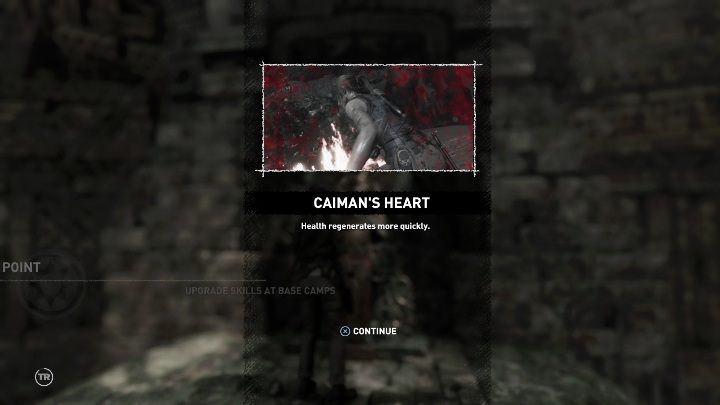 All you have left to do to reach the shrine is to jump on the other side. You will unlock the Caiman's Heart skill - it increases your health regeneration.