The trial of the Eagle is one of the locations in the Shadow of the Tomb Raider and it gives the players a complex puzzle to solve. The location can be reached from Kuwak Yaku and Lara has to have completed the Trial of the Jaguar.

The first part of climbing - reaching the first sail 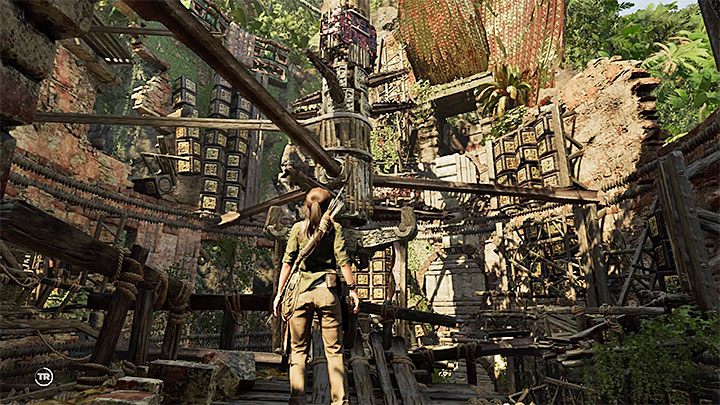 This riddle uses the tower shown on the picture. There are moving parts of the tower (some of which can instantly kill Lara). The task is to reach the top of the tower. 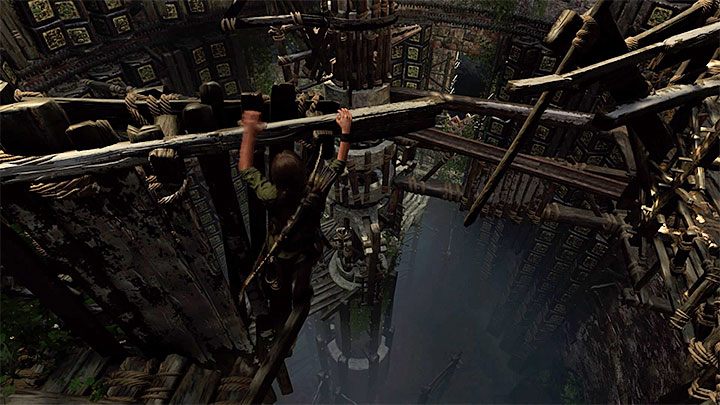 Start climbing and remember to avoid the moving parts of the mechanism. In many places, you will have to perform perfect jumps in order not to die.

Soon after starting the puzzle, you will have to hold onto the ledge showed on the picture and move to the side. 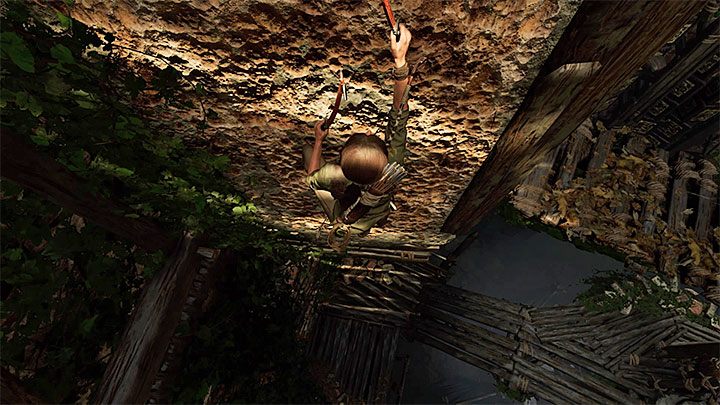 Another problematic spot is shown in the picture above. Lara, after getting onto the climbing wall, has to lower herself to the lower platform, using a rope. 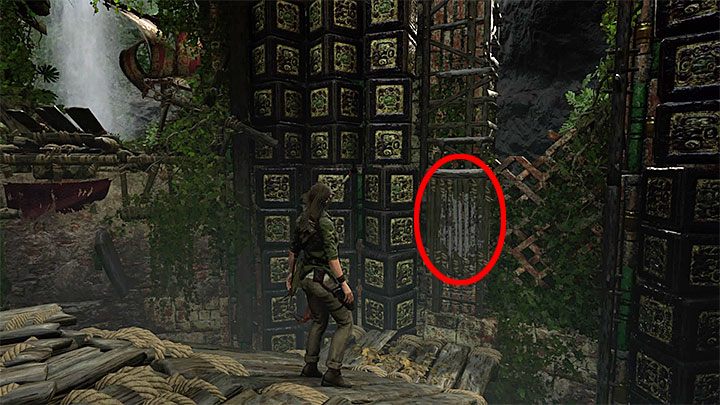 Reach the wall shown above (you have to bounce off to reach the upper ledge). Start climbing here, but this time move to the right so that you can get to the outside of the tower. 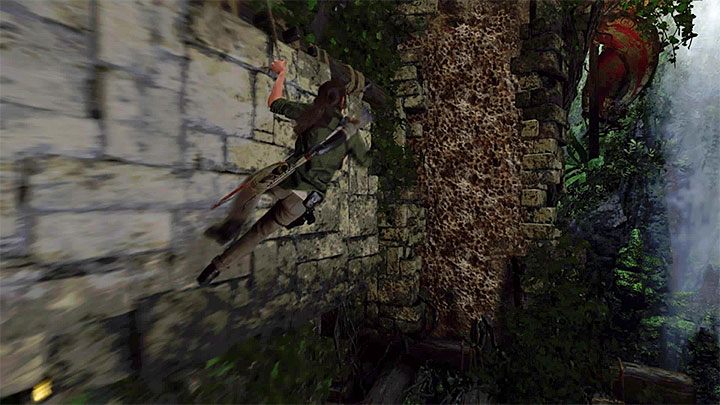 Lara shall reach the climbing wall. After you cling to it, lower yourself using the rope. Get as low down as you can. Start running on the wall, and swing left and right. This will let you reach the next part of the wall, shown on the picture. 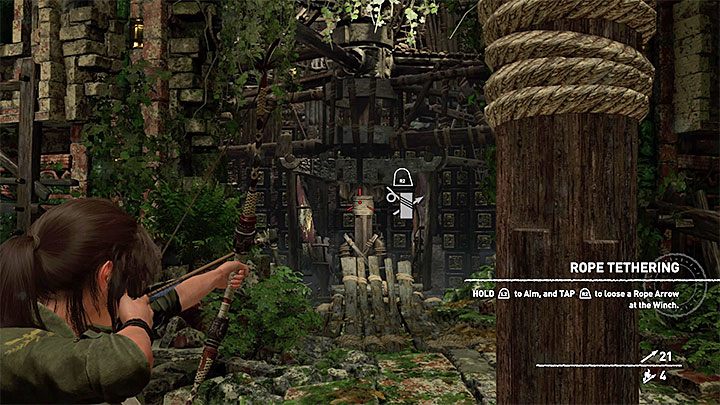 Climb up and you will find yourself next to a structure reminding a sail. Stand next to it and aim the bow at the rope coil. This will unlock the passage. 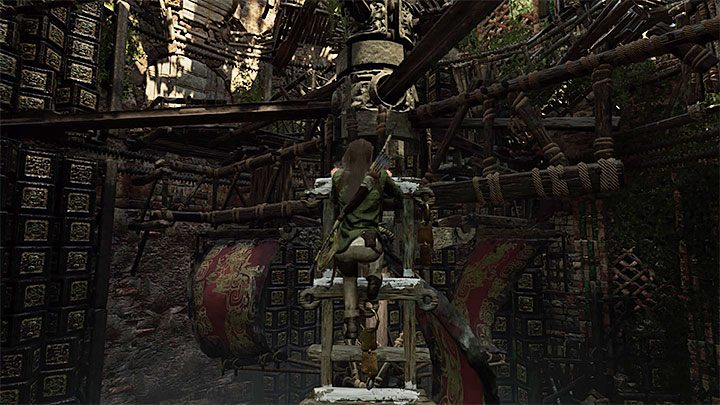 Get near the central, rotating construction. You have to reach the ladder shown on the picture - jump when it's directly in front of Lara. 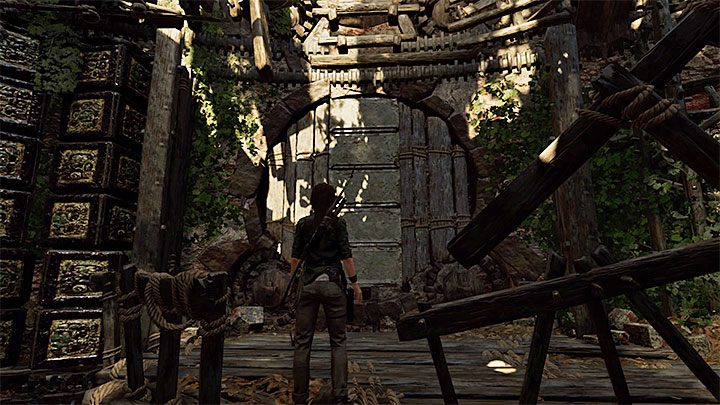 Climb onto the beam, but avoid the moving parts. You have to reach the rotating structure shown above. Wait until it stops in a configuration that allows climbing and start going up. 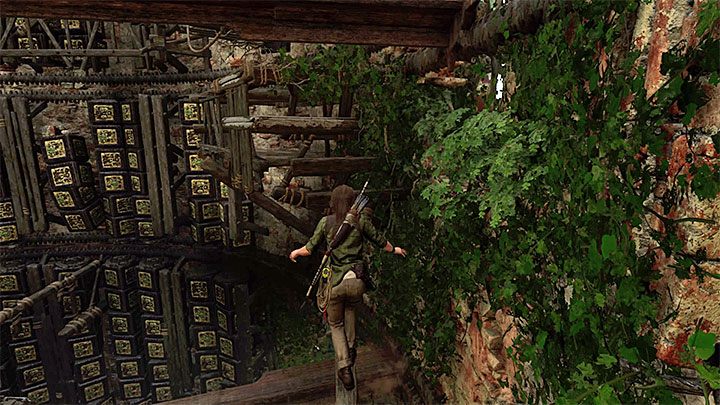 After reaching the largest ledge, take the beam and when in the spot shown above - make a leap. Lara will notice a new sail behind a damaged wall, but won't be able to break through. 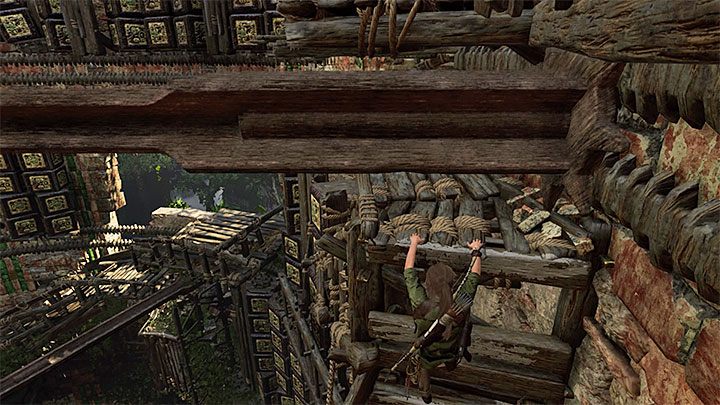 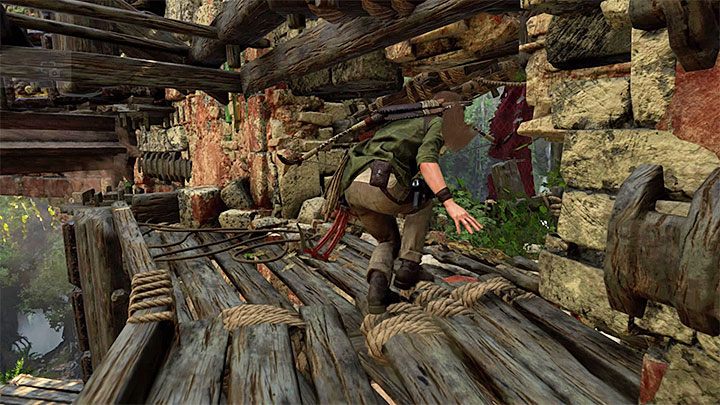 Reach the new ledge, but don't start climbing right away, there's one moving part here - shown on picture 1. Wait until it passes Lara, and only then reach the right hole shown on picture 2. You will be near the second sail. 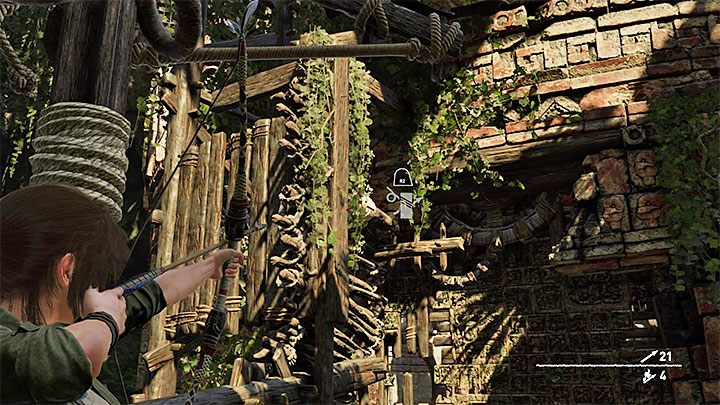 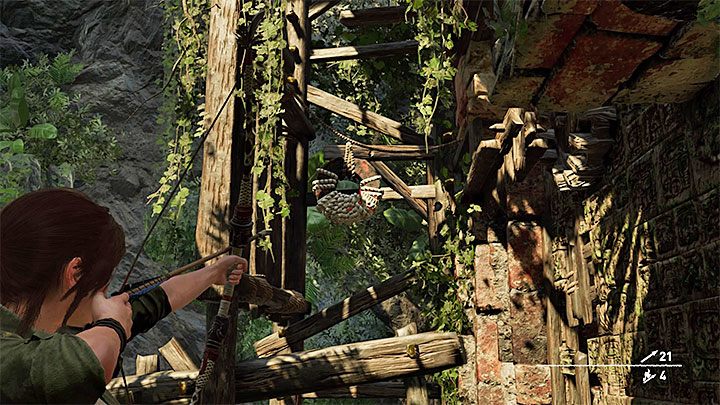 Examine the damaged, outer part of the tower and you will find the round lever shown on the picture. Try hitting it with a rope arrow. Lara will be able to pull it, opening the right passage for a short moment. 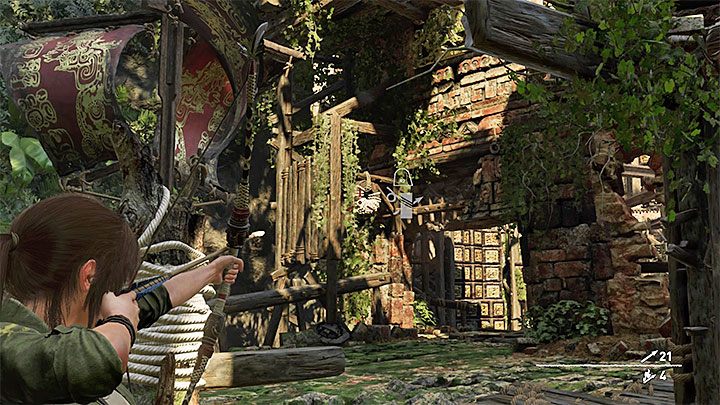 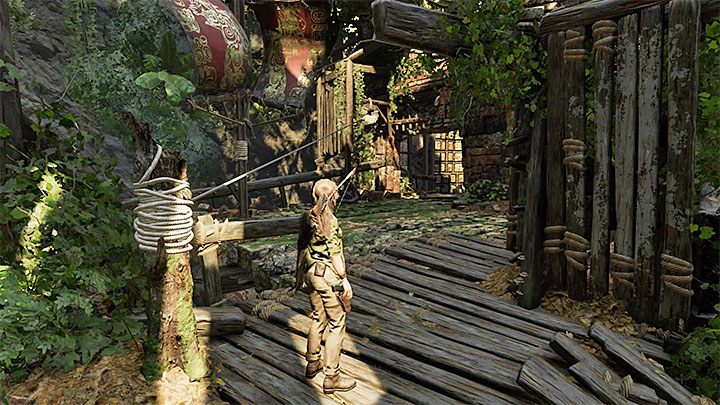 Act quickly now, because the lever will soon be back in its original position, which means closing the passage.

Reach the coil of ropes on the left of the sail. Stand next to it and aim at the protruding lever (picture 1). Connecting these two elements will make sure the lever doesn't close the passage again (picture 2). 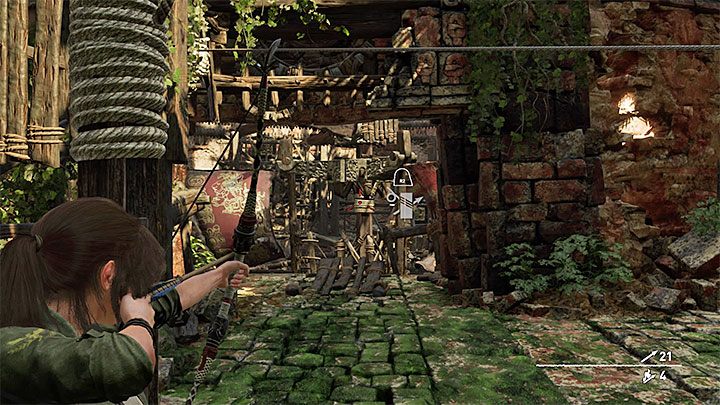 Now stand next to the other sail. Now aim at the coil of ropes located in the center of the tower - as shown above. You can now commence the last stage of climbing.

Part three - reaching the upper exit from the tower 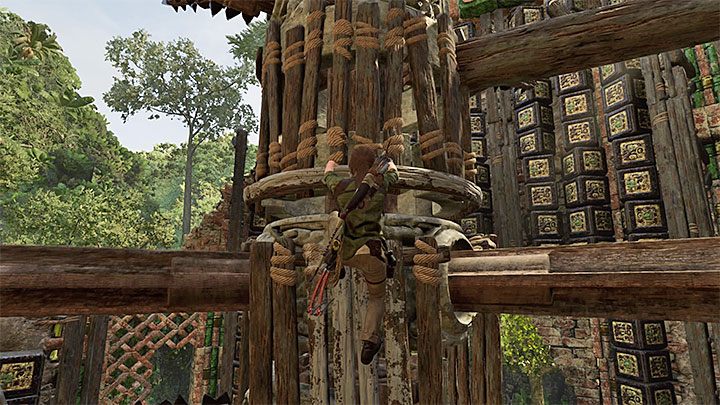 Just as before, you have to wait for the right moment for reaching one of the ladders mounted onto the central mechanism. Climb onto it and jump into the center of the structure. 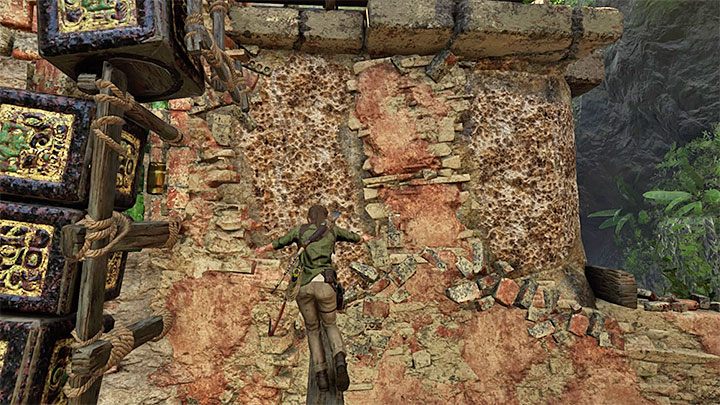 Use the beam to reach the two climbing walls shown on the picture. Remember about using the ice axe with the right button. 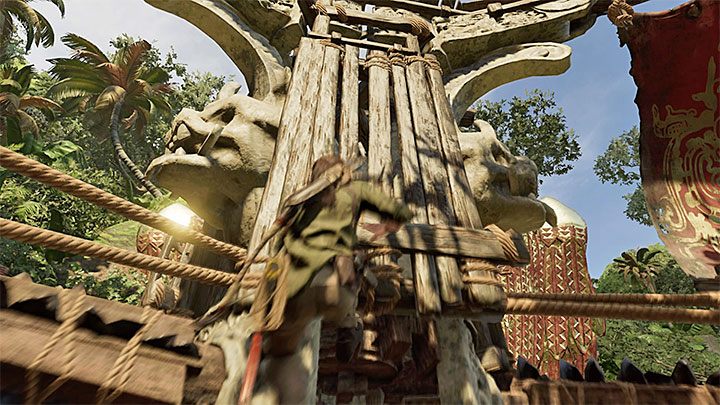 After reaching the upper ledge, use the new beam and jump onto the edge near the red part of the center of the structure. Here, you have to wait for the right moment to jump to the higher ledges (picture above). 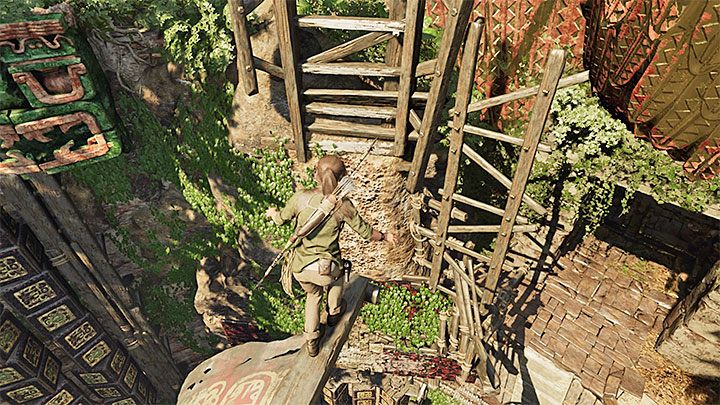 Climb onto the highest beam and reach its end. Wait until you're near the climbing wall shown above and perform a leap towards it (use the axe). 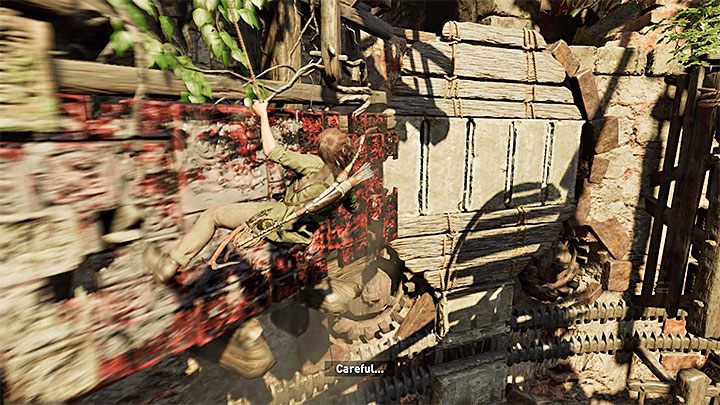 Lower yourself using the rope and start running on the wall. You have to reach the edge on the right. 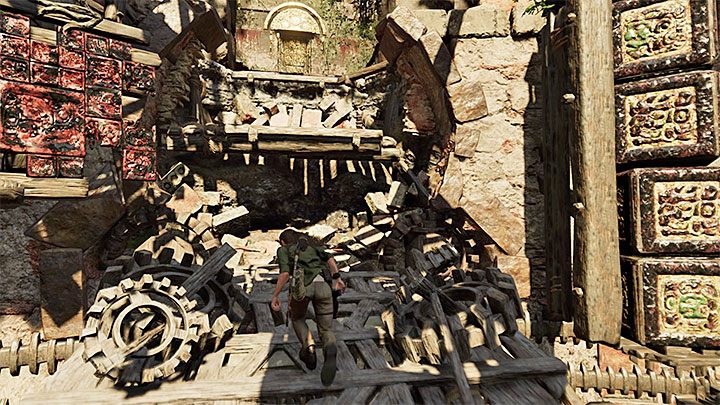 A part of the structure will start crumbling, but it's a scripted part of the game. Climb up and reach the exit. There's a new mural there, and the path leading to the Hidden City.