This page of the Resident Evil Village guide contains a walkthrough of the Stronghold location, which is associated with the main storyline. In the following guide, you will learn how to get to the stronghold for the first time and how to successfully defeat the monsters in there. 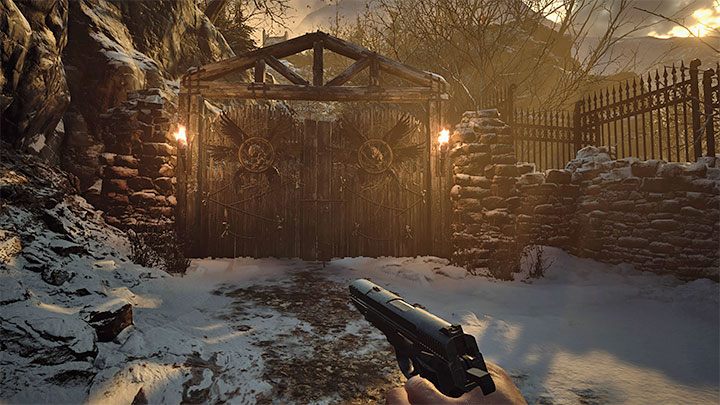 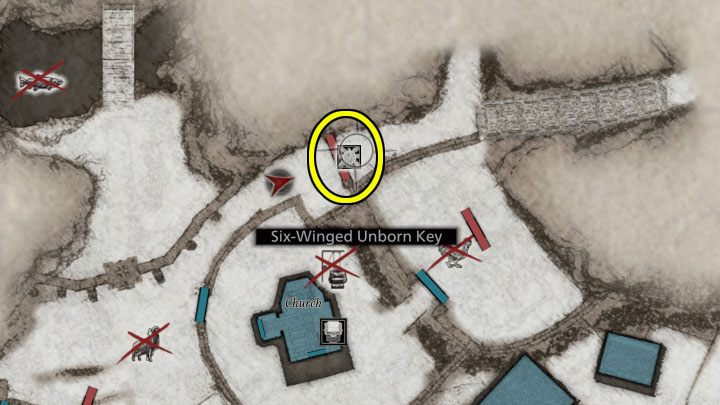 Going to the Stronghold will be available only after you've visited the Reservoir and defeated the Moreau boss. In the final stage of the reservoir exploration, you could obtain the Six-Winged Unborn Key. Use it in the central part of the village to open a gate located north of the church, as shown in the pictures. 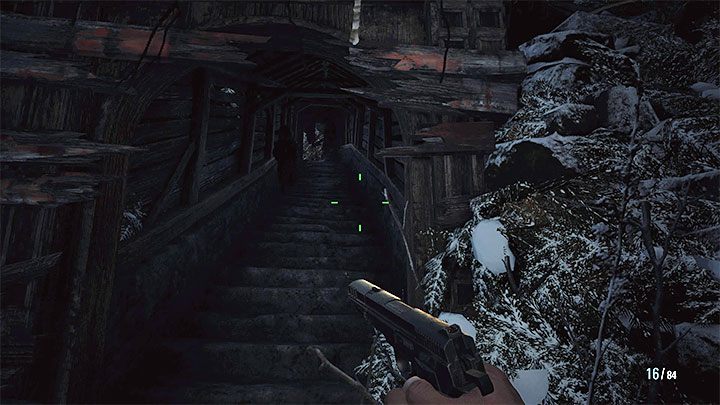 Soon after you start exploring the new part of the world map, you will reach a crossroads: 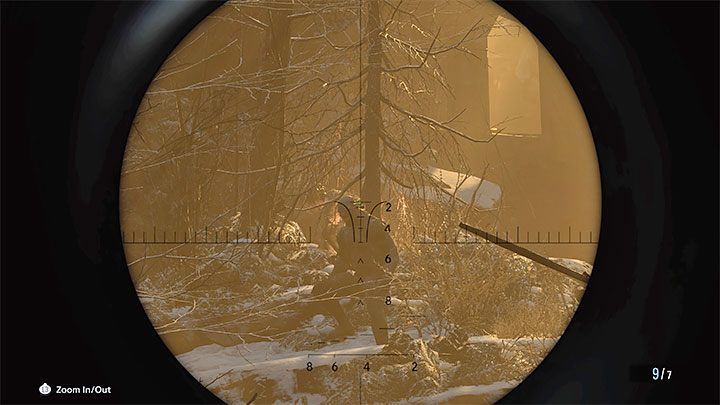 The journey towards the stronghold involves a lot of fighting. The universal advice is to move forward slowly and carefully eliminate any monsters you encounter. The exception is if you have a very limited supply of ammunition. When supplies are scarce, consider retreating to the main part of the location and exploring it more thoroughly to find more supplies. As a last resort, you can also purchase some ammunition at the Duke's.

Sniper rifle is the ideal weapon for exploring the stronghold and its surroundings. You will be able to easily attack multiple opponents from a long distance. However, observe the monsters' actions because lycans are clever and will try to shorten the distance between you. If it happens, equip a shotgun or a pistol. If under threat, you can always retreat and let the monsters approach Ethan. 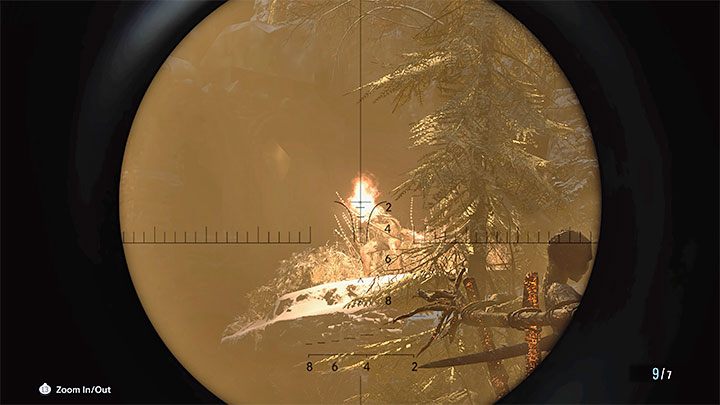 Watch out for enemy archers (example in the picture), as they are able to attack from a distance and set the main character on fire by using flaming arrows. Use a sniper rifle to kill them. When expecting an attack of archers, keep running to the sides so as not to be an easy target for them.

Try to keep examining your surroundings. New loot can be left by enemies, it may either lie in plain sight or be stored in chests. 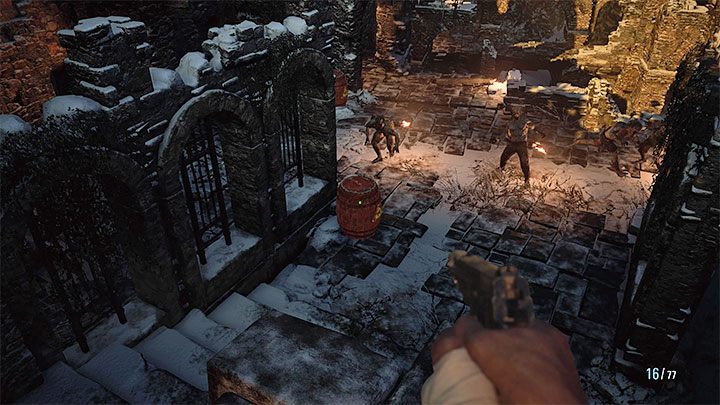 Once you reach the locked gate, use the ladder to reach the first of the two mechanisms responsible for raising it. Interacting with the mechanism will unfortunately lead to the start of a large battle in which you will have to defend yourself from the attacks of the lycans.

While fighting, look for opportunities to hit red barrels, especially if more than 1 monster has lined up nearby. Expect that lycans can get to Ethan quickly. In this situation, it's worth switching to a shotgun. If it gets too dangerous, you can also return to the place you came from and fight from there (Lycans do not appear in unlimited numbers). 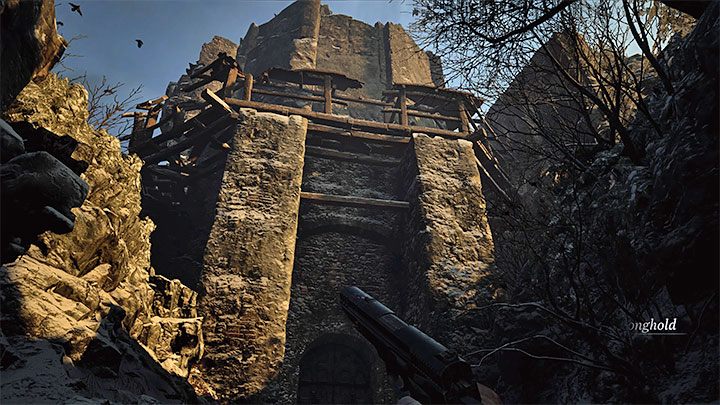 After winning the battles, use the ladder to reach the second mechanism. You don't have to fear another battle as the passage will be unlocked fairly quickly.

A new path will lead you inside the stronghold. Remember to collect loot from the area (also check if you can craft something). There's also a typewriter here.

Getting through the interior of the stronghold 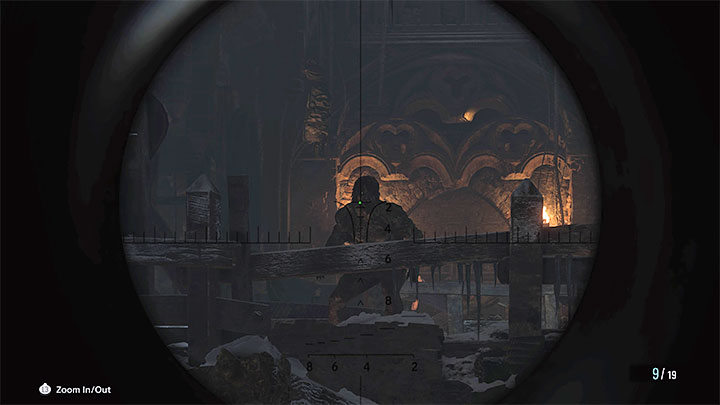 Inside the fortress, the general rules of combat remain largely unchanged. As previously, a sniper rifle will work best against the lycans. You can use it to kill multiple lycans before they get noticeably close. Equip a shotgun only in critical situations.

You will also find explosive barrels in the area, but it is always a good idea to refrain from blowing them up until a larger group of monsters appears and reaches the barrel. 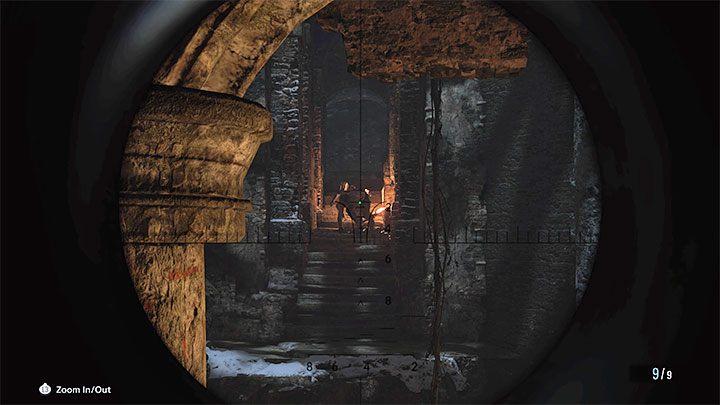 You can keep going forward on the floor where you started exploring the stronghold or you may jump down to a lower level.

Expect that later on some lycans may appear in the corridor from which you came. Don't get surprised by monsters coming from several different directions and keep eliminating lycans that come dangerously close to Ethan. 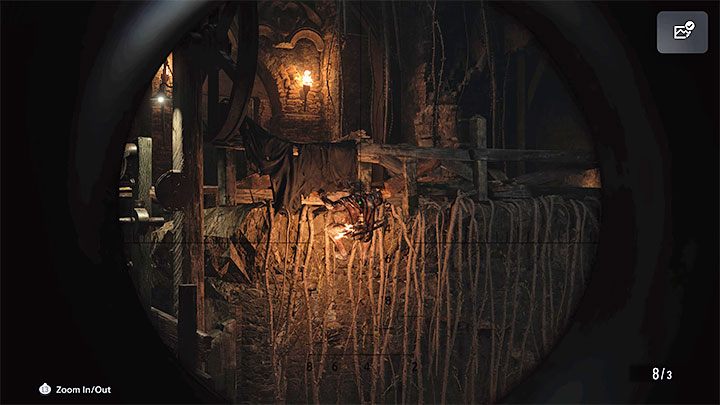 As you make your way through the stronghold, you can use the option to slide down the rope to quickly escape to the ledge at the opposite end of the room. The game will also allow you to shoot at climbing lycans - there will be an opportunity to kill them before they finish climbing.

Watch out for new archers and be ready to deal with the armored lycan - consider using a grenade launcher or pipe bombs to kill it. 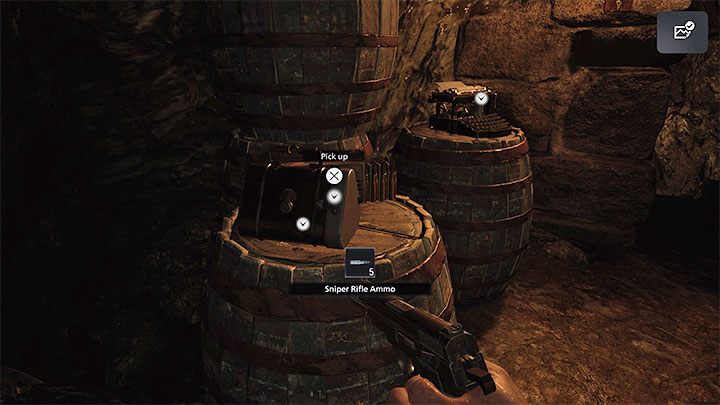 You must reach the entrance to the small circular room. Collect new loot inside it and head down the spiral staircase. On the way, the hero will have to start squeezing through, but there are no additional hazards involved.

Eventually, you will enter a room with supplies and a typewriter. Be sure to create a new save, because there is a new and more difficult boss fight ahead of you.