This section of the guide to Remnant From the Ashes contains a detailed description of the Undying King bossfight. You will find out what attacks the boss has, what battle tactics are suggested, and what secrets/rewards the defeated boss drops.

Undying King - this is one of the main bosses, also one of the most difficult ones. One of the few bosses who have as many as 3 phases. Meeting him is mandatory, although fighting is optinal. The initial meeting looks like a simple conversation with an NPC. He asks you to bring him Guardian's Heart. If you refuse, you will start a very hard fight with him. 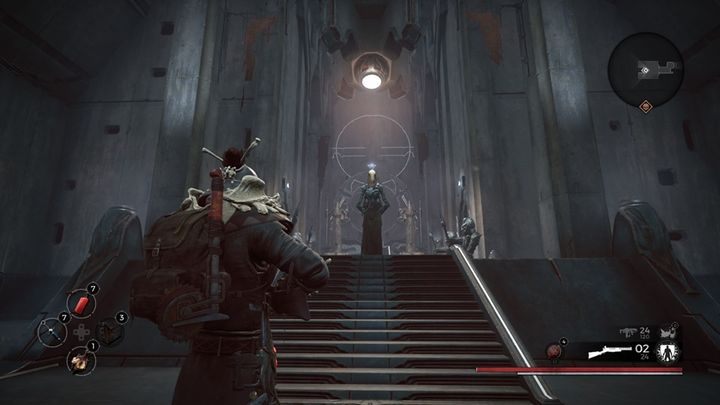 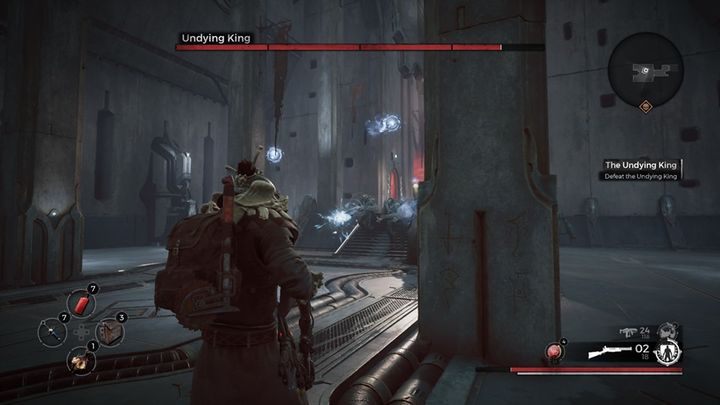 Useful items for fighting the Undying King include Ammunition Boxes and Bloodworts. A weapon mod called Iron Sentinel is great here, which creates up to two turrets that shoot continuously for 30 seconds. Having so many opponents in such a small arena to defeat, the turrets can make a difference.

The beginning of the boss fight looks has four Golems, who stand still next to the boss, come alive and begin to attack us. You have to kill them as soon as possible, because after a while, the Undying will start to create the orbs. Shoot the golems in the head - that's their weak spot. Once we deal with the Golems, the Undying will begin to create orbs. You have to deal with them as soon as possible, as the Undying will keep creating them, so they will stack if you don't keep it contained. The Undying King should always be attacked when an opportunity appears, preferably in the head or the blue sign above his head (his weakest spots).

When the Undying King will get little damage, he will begin its second phase, where he starts to fight with swords. At this point, he loses the ability to create the orbs (he only creates them when he doesn't use swords). However, mind the chambers from which more Golems may appear. At this point, the Undying King will slowly move in our direction, sometimes using a leap to reduce the distance. It is important not to panic when the King comes close. The leap itself is not dangerous, only after performing it, the King delivers a series of attacks, which can easily kill you. After the leap, the Undying King will attack the player with swords. They are powerful, but it's enough to avoid just one attack to prevent him from completing a combo. Always avoid his attacks by rolling forward, towards the boss. You will find yourself behind him, and he will stop making other attacks. It's important to get a good feeling of that. If you're hit, do not panic and try to make an attempt to dodge towards the boss. His attack is as follows:

Leap, break, 1 Attack, 2 consecutive strikes, another break and a powerful attack with two swords at the same time. After a successful evasion, the King will either slowly walk towards us, or hide the swords and start creating Orbs.

Phase 3 will begin when Lurkers start climbing out of holes in the walls. They can start attacking even if you have not previously defeated Golems and Orbs. It is important to keep the number of enemies in check - that's why the turrets can be particularily useful. If we do not have a weapon mod, it is better to have at least one mod that deals damage to the area. The moment the Lurkers appear, the Undying Kind will slowly move to the place of meditation. Do not attack him in this state until you deal with the remaining enemies. He doesn't replenish that many HPs, and when he meditates, you can deal a whole lot of damage to his head. If you give him enough damage, he will wake up and start fighting.

Also, when you finally beat him, the fight doesn't end. As the name suggests, the boss is not so easy to kill. After "dying," he will lie on the ground for a while, and then be resurrected with 1/4 of HP. The fight doesn't change after this moment. When you defeat him another time, the victory will be complete.