The following Guide to Remnant: From the Ashes is a collection of valuable tips that will help you defeat any opponent who gets in your way. In this tutorial, you will learn about the most important tips for the first moments in Remnant: From the Ashes, the selection of the starting class, and leveling our character up. You will learn the answers to frequently asked questions: what are the traits, what happens when you die (in the game ofc), and what the multiplayer looks like. One of the main sections of this manual is the guide to bosses (both the main ones and the dungeon ones), what are the key binds in the game, and how to deal with particular types of opponents.

Remnant: From the Ashes is a third-person action game (TPP) with elements of RPG. Remnant can be safely included as a member of souls-like games not only because it's pretty difficult, but also because the thrilling boss duels are a key part of the experience. In Remnant: From the Ashes, we go to a post-apocalyptic world overrun by monsters called "The Root." In Remnant: From the Ashes, every fight is a big challenge, especially if you're going alone. As the game progresses, we travel through procedural worlds, making each location a new, completely different challenge for the player. With items that give us different perks, as soon as we equip them, we can go through the game in many different ways, creating different builds for our characters.

New game + doesn't exist here, or at least not in a similar form to other games of this type. This works on the principle of a 'Reroll' of the game world. We can do this both at the very beginning of the game and at the end, always increasing the level of difficulty. To do this, unlock the Red Stone in Ward 13.

Just "refreshing the game world" increases the difficulty by adding more elite opponents. Basic opponents will also be harder to defeat. In return, we'll get more experience for them. In addition, the Lumenite Crystal drops more often (it's needed to improve items).

If you decide to take such a step, please note that our equipment (Armor, Weapons, and Mods), Scrap (in-game gold), and consumable items will remain in your inventory. The only thing that changes is the map.

Game Modes in Remnant: From the Ashes

Remnant: From the Ashes offers us three modes: offline, private (friends only), and public online. Select the game mode at the very beginning in the main menu. Choosing the offline mode, you can be sure that no one will join. The friends-only mode allows friends to join, while the online will match random players from all over the world. To change the gameplay mode, go to the main game menu and select the appropriate option.

About Remnant From the Ashes Guide

Remnant: From the Ashes Video Game 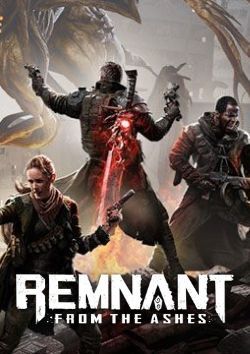 An action game with role-playing game features. It takes the players to a post-apocalyptic universe, where they face monsters known as The Root. Remnant: From the Ashes was developed by Gunfire Games (the creators of Darksiders III) with four-player cooperation mode in mind.

Remnant: From the Ashes is a multiplayer action game with RPG traits. It was developed by Gunfire Games, the creators of the third entry in the popular Darksiders series. The title was published by Perfect World Entertainment on PC, PS4, and XONE.

Remnant: From the Ashes takes the players to a post-apocalyptic universe in which the world was taken over by creatures known as The Root. Those who survived are forced to fight to survive each day. At the same time, they are looking for a way to send the invaders to where they came from.

In Remnant: From the Ashes, the action is presented from a third-person perspective. The game features a few character classes, each with unique set of skills and strong and weak sides. During the game, the players are traveling through procedurally generated worlds and they are facing varied enemies. Among the adversaries, there are both smaller monsters that attack in groups, and bigger creatures that are bosses.

Players are gaining experience points and unlocking new skills during the game. Thanks to that, their chances for survival increase. The combat potential of the characters can be also increased by upgrading the weapons or by obtaining new equipment. The items can be bought from merchants (they must be first invited to players base) or crafted.

Remnant: From the Ashes was developed for cooperation mode. During the game, the players can create teams of up to four people.