Explore the Wild West together with your friends! Our guide to Red Dead Online is a compendium where you can find numerous information about Rockstar Games' newest title. The guide features a chapter dedicated to the game's basics where you can find descriptions of the gameplay modes, learn how to create your own posse, read about your camp or check the most important starting tips.

Our guide will help you learn what you can do in RDO, what does the game has to offer, and how to avoid dangers that await you in the multiplayer. Also, we have included tips on how to earn gold, experience points, and money. Your character can reach 100 ranks - we have listed all the rewards that are unlocked with new ranks. The guide also contains descriptions of various challenges.

The guide for Red Dead Online contains walkthroughs for all the story missions available in this mode. Players can complete 8 different missions. To complete them, you will need to reach different honor ranks. Besides the story missions, you can also check information on various Stranger quests.

Our guide also features information about weapons, ammunition, gunsmiths, and a new feature available in this mode - the handheld catalogue. The Dead Eye has also received a few tweaks - players can now modify it to their liking.

The FAQ chapter focuses on the most important aspects of the game - how to change your appearance, how to quickly change your honor, get money/gold/XP, and much more. We have also prepared a detailed description of your character - your skills, information on how to reach new ranks, and ways of increasing your main stats.

Red Dead Online is similar to Grand Theft Auto Online. The developers have reused the content made for Red Dead Redemption 2 and added multiplayer elements to it. The game is set in North America. The end of Wild West is nigh. The game's world is vast, full of interesting locations, NPCs, and numerous side activities. These activities include both story missions and classic multiplayer modes. The game has content for players who enjoy cooperation and those who want to compete with others. There are also some elements that were borrowed from the multiplayer mode available in the first Red Dead Redemption. 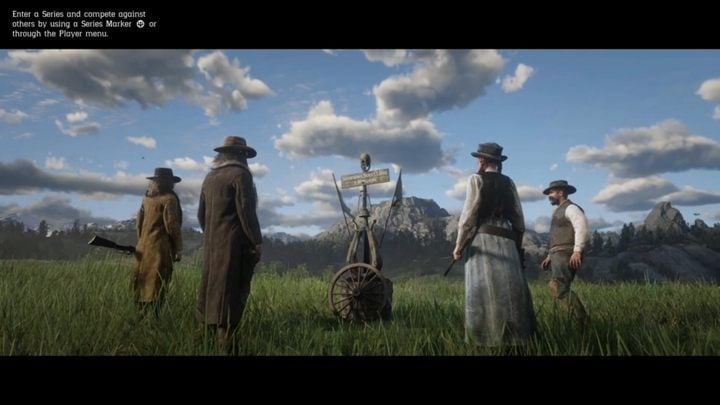 Let's start with the story aspect of this mode. After the prologue, you will be able to complete various missions - they are marked with a gold icon. These missions are similar to those in RDR2 - they have an introduction part, plot, and even moral choices! You can do these missions with other players - up to four people. These are the most important tips to this game mode: 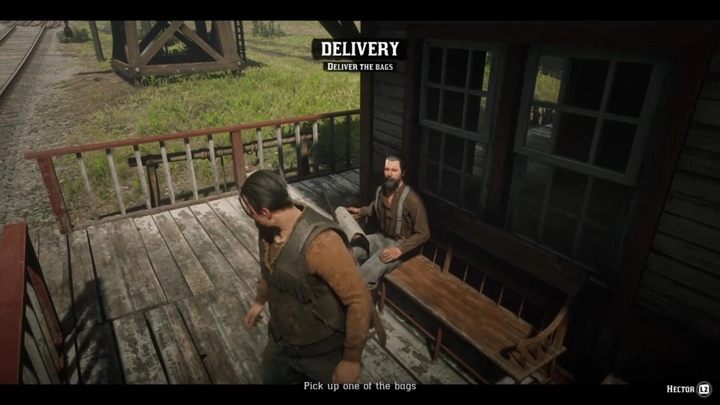 As for Stranger missions, these quests are rather easy and short. Usually, you have to bring an item, retrieve a stagecoach, participate in a firefight etc. These missions must be done in the free roam mode - other players can interrupt you. Don't be surprised when a calm and peaceful escort mission will end with a firefight with an opposite gang wanting to capture your stagecoach and claim the reward.

Stranger missions don't work - what should I do?

Note that Red Dead Online is still available in beta version, so this kind of errors can be quite frequent. If the stranger mission doesn't work or crashes the game, you have to wait for the solution.

A temporary solution is to change the free roam game session or to start a new stranger mission. Rockstar will eliminate this kind of problems with the next updates.

The game features a few game modes where you can fight with other players: Shootout, Make It Count, Most Wanted, Hostile Territory, and Name Your Weapon. Each of the modes differs slightly (the rules are described in one of the chapters) which means that you shouldn't get bored. You can also choose whether you want to play in a mode with 16 or 32 players. The game has several game modes. Their descriptions, along with advice, can be found below: 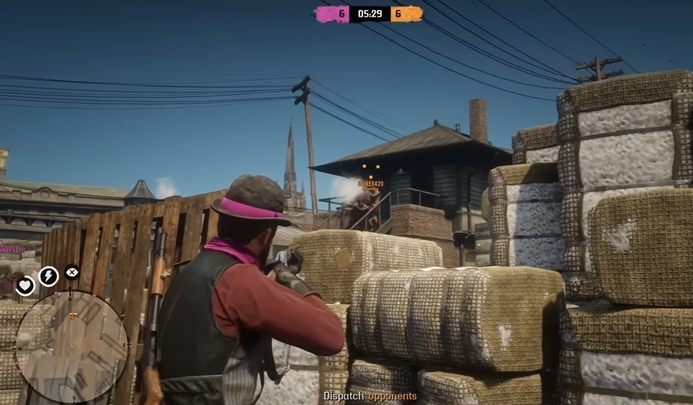 A classic mode where you use firearms. You have an unlimited number of lives - eliminate as many enemies as you can within the time limit. Here are some tips how to win a shootout: 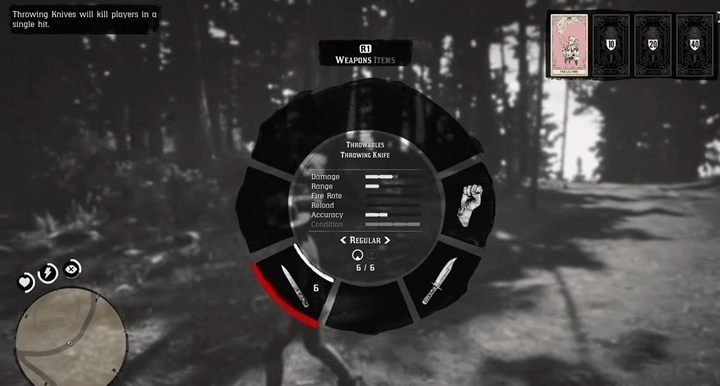 A variation of a Battle Royale mode. Stay alive until the end - you can use only a bow, a few arrows or throwing knives. The arena will get smaller over time. Here are some tips and information for this game mode: 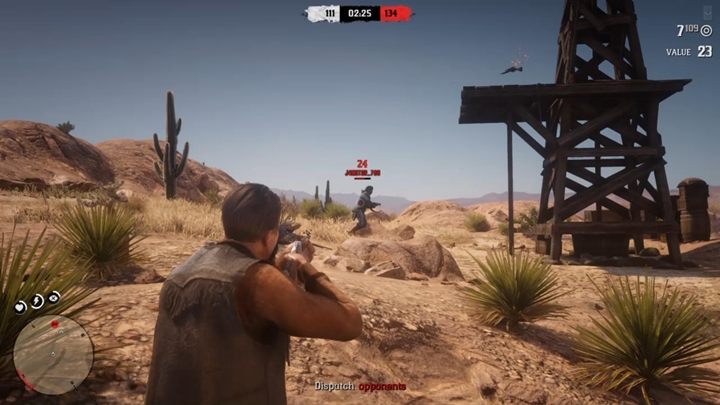 Shootout but with a few modifications. Kill enemies to get higher on the score table. However, the higher you get, the more points opponents will get for killing you. If you are good at shooting then watch out - players will try to shoot you down. 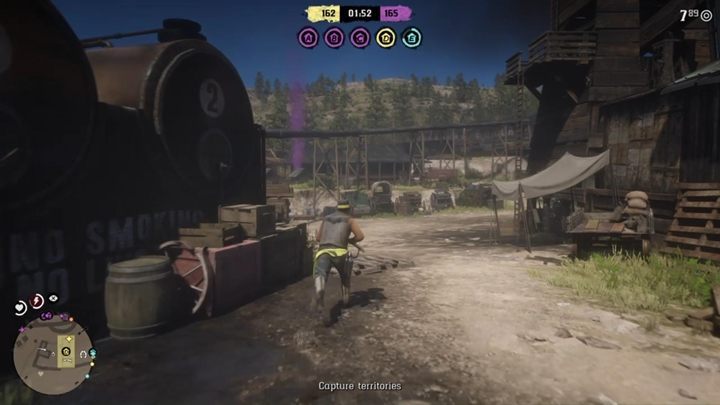 Cooperate with other players to capture points on the arena. The more points you have, the higher the score. You can also win a match by capturing all the points before the time runs out. 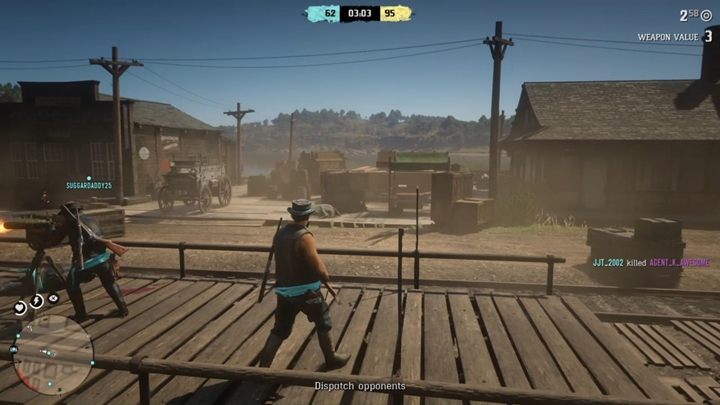 Free for all or in teams. The harder the weapon to use, the more points you will get. To win in this mode, learn the following tips:

The game features a lot of races where you can compete with other players. Here, you will need to be good at controlling your mount, managing your horse's stamina, and have knowledge about the terrain. The developers have prepared two racing modes, which are a lot of fun. Some gameplay mechanics even resemble those from Super Mario Kart, where you can use "weapons" to take the lead. 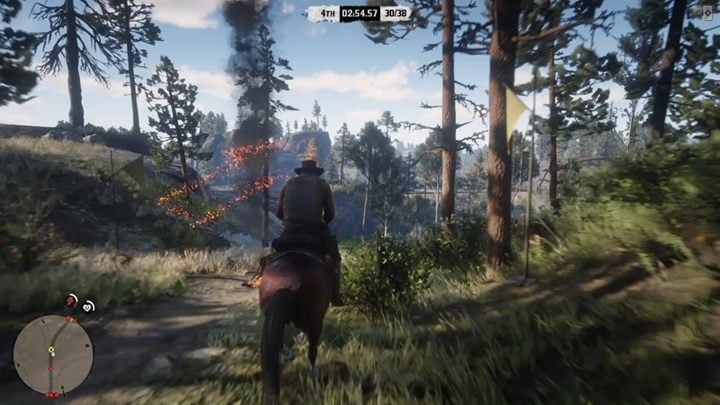 In standard race, you have to reach the finish line before other players. The most important information about this mode: 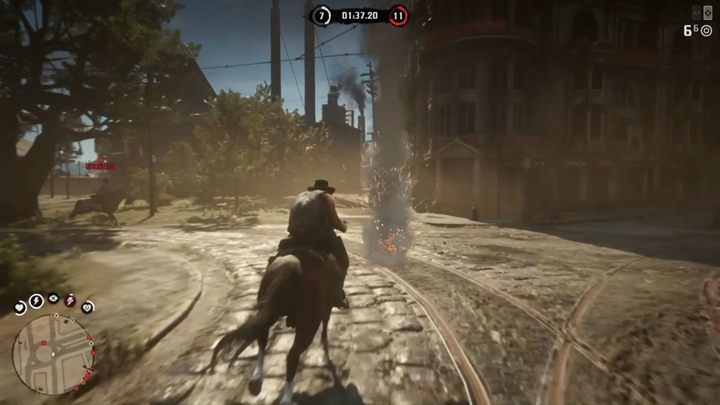 The goal of this type of race in Red Dead Online is to ride through certain numbers of bonfires scattered around a big area. This time, you can decide which point you visit first.

Other activities in Red Dead Online

The multiplayer mode also allows you to hunt and go fishing. You can sell meat, fish, and skins to get a lot of money and XP. Remember - in multiplayer mode you can get shot while you are walking through a forest.

Hunting other players and interacting with them

Other players are marked on your map. You can go to them and try to interact. Your character can fight, have a conversation by using the voice-chat etc. I had a lot of fun when I met a lot of players in Rhodes who divided themselves into a few groups and tried to capture the town for themselves.

The biggest drawback of the current version of Red Dead Online is the very poorly designed game economy. Activities in the game are still balanced, but in the present form many of them are still unprofitable. At the beginning, most players hunted and fished, because these were the most profitable activities. But currently, the story missions, challenges or taking part in series are more profitable.

Still, practically every activity in the game boils down to laboriously collecting dollars and gold (standard and premium currency in the game). In RDO, you have to pay for everything: food, ammunition, fast travel, owning a horse, new weapons or cosmetics. Often our earnings are paid in cents, and the prices of weapons or mounts reach over $600. Hence, when playing a game, you have to prepare yourself for grinding. Fortunately, the developers give free gifts from time to time- for example, the beta players got 15 free gold bars and $250 with the first update.

Rockstar still emphasizes that they're balancing the game and it's possible that later changes in Red Dead Online will completely change the economy. Great potential lies in the honor system and in adding new activities, such as playing poker. So far, however, economics in RDO is designed very badly for players.

Currently, the beta version doesn't feature any microtransactions. However, they will be added later and become an inseparable part of the game. You can spend real money on gold which can be exchanged for valuable items. Luckily, you can get gold thanks to other modes - by receiving nuggets. 100 gold nuggets will give you one gold bar.

Of course! You can play the game alone - it is easy to find a posse and become its member. Try to get a microphone so you will be able to communicate with other players. Many missions and game modes allow you to choose players - you can only feel "lonely" when you are exploring the map in free mode.

Can I meet the characters from the campaign in Red Dead Online?

Yes, you can meet some of them, but they play a minor role here. You won't meet Dutch and the other gang members - treat RDO as a completely new adventure.

This chapter focuses on the game's basics. Here, you can find the most important information regarding Red Dead Online.

Life on the Wild West isn't easy. Prepare yourself for numerous fights with NPCs and other players. We have prepared chapters that will help you win fights, and learn about the available equipment.

This chapter contains the list of the most important questions regarding the game along with our detailed answers.

Rockstar Games has prepared a lot of rewards - you can unlock them by receiving new ranks or by completing challenges. We have prepared the full list of rewards available in Red Dead Online.

You start Red Dead Online with creating your own character. The next three chapters focus on describing the character creation process.

Currently, Red Dead Online has 8 story missions. These missions can be played with groups of up to 4 players. We have prepared descriptions of all the missions - learn how to beat them fast and get gold medals.

What will be added to RDO?

Red Dead Online is still in beta which means that some of the new content will be added in the future. In 2019, Rockstar plans on adding the following features:

No, although it must be noted that many players have left the game, waiting for new updates. Currently, RDO doesn't offer a lot of content - the majority of its attractions can be experienced within the first few hours. Another problem is the lack of a system that would allow players to turn PvP off or to simply play on a server where they can, e.g. hunt without worrying that they might get attacked. Rockstar pays attention to players' feedback by releasing numerous patches and updates for the game.

Red Dead Online is still in beta which means that it hasn't reached its full popularity yet. The current game can be treated as a test version - many players are waiting for the full release. Also, there is still no news about the PC version of Red Dead Redemption 2.

The most important updates