Metro Exodus can be a merciless game - especially at higher difficulty levels. We have prepared for you a set of tips that will make gameplay easier and allow you to reach the end of Artem's adventures. Check out the following page to prepare yourself for the dangers of the Metro world.

Escaping is often a better idea than fighting 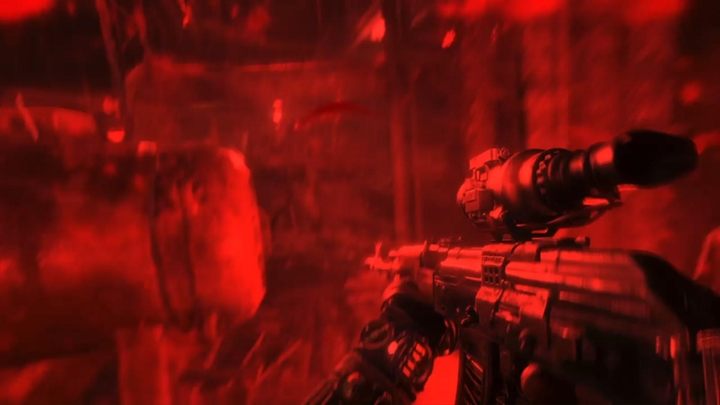 You don't have to always kill monsters, bandits and other enemies in the game world. Very often, the best solution is simply to escape, especially when you have little ammunition, lack first-aid kits, or simply the fight at a given moment does not pay off. Killing monsters is often a waste of resources, because you will not find anything after looting corpse.

Aim at the head 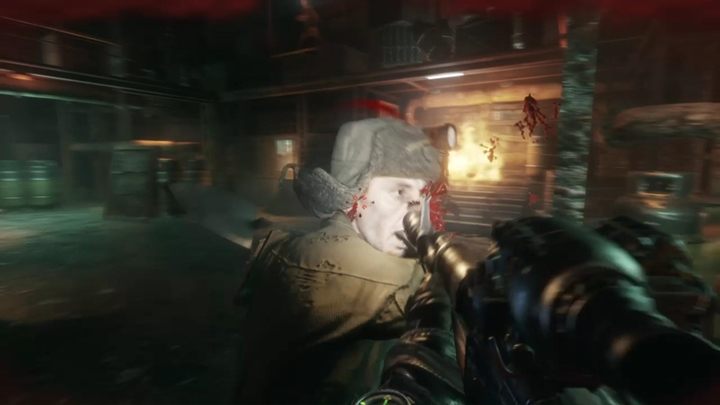 Targeting opponent's head will allow you to quickly eliminate enemies - even larger ones. So always try to aim at head and let some monsters come close to you to kill them quickly and save a lot of ammunition.

You can influence your companion's fate 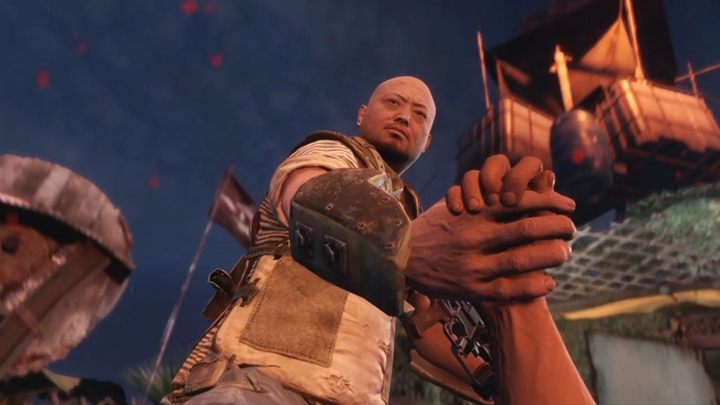 We will avoid spoilers and write in general terms. Starting with the Volga, you will have a few moments in the game where you will be able to "quietly" deal with enemies or escape from a specific place. If you want a good ending and a living companion, always try to resolve the conflict without bloodshed. This will affect the final events in the region of the game.

Watch out for karma points 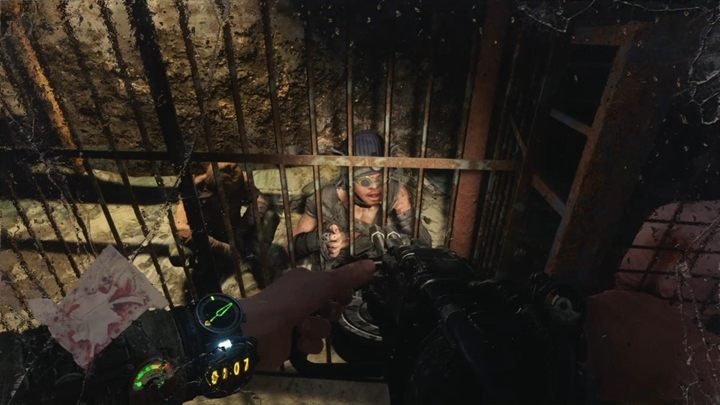 There is an invisible karma system and good/bad deeds in the game. From time to time, your enemies, will raise their hands and try to surrender - if you kill them, the screen will darken for a moment and you will hear a characteristic sound. This is a sign that the game has noticed that you acted immorally. Similarly, good deeds are also recorded by the game - it matters in the final of the chapter, so keep in mind that your actions matter.

The air-gun is good for weaker opponents 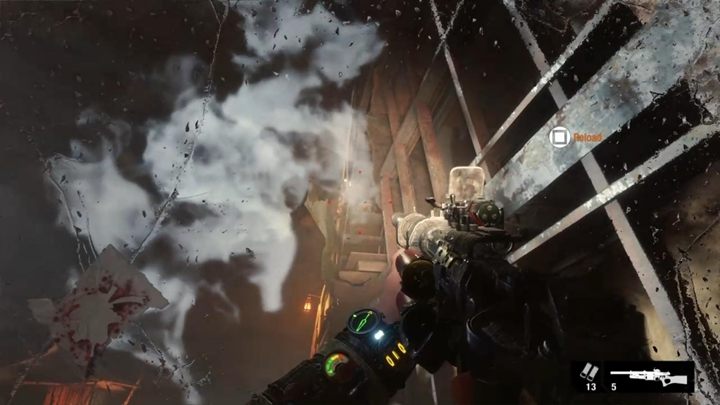 Try to use the air-gun on the weakest enemies, as it is relatively easy to find ammunition for this weapon - it is easily accessible and can be found everywhere. It is not worth wasting valuable resources when fighting several mutants. 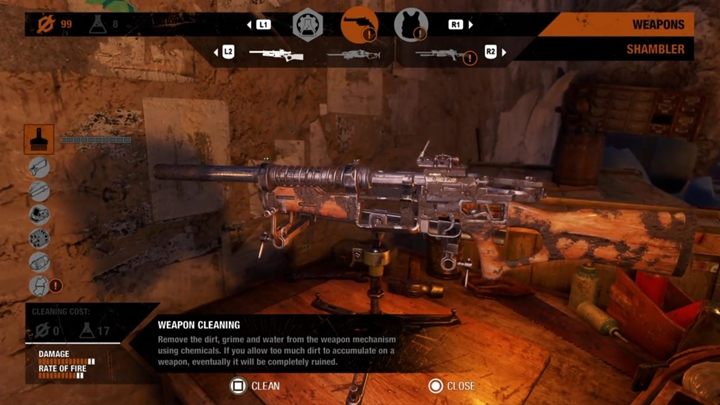 After reaching the Volga, the game will feature workshops where you can create different items. When you use the workshop, you can clean your weapon, which gradually gets dirty and loses its efficiency. Whenever you pass the workshop, try to check the status of resources, craft first-aid kits, make ammunition and clean the weapon. 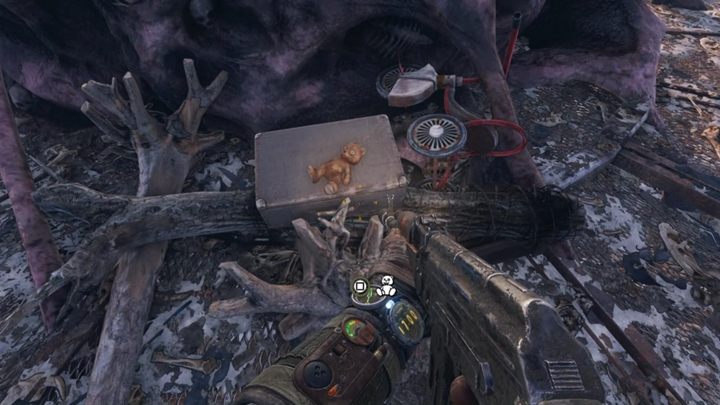 In addition to story missions (marked X on the map), from time to time you will learn about interesting points on the map. It's worth exploring such areas, as you can often find upgrades for equipment in these areas and even other valuable items. In Volga, for example, you can quickly find the arrow from the compass, which points you in the direction of the next story objective.

Change the time of day for current tasks 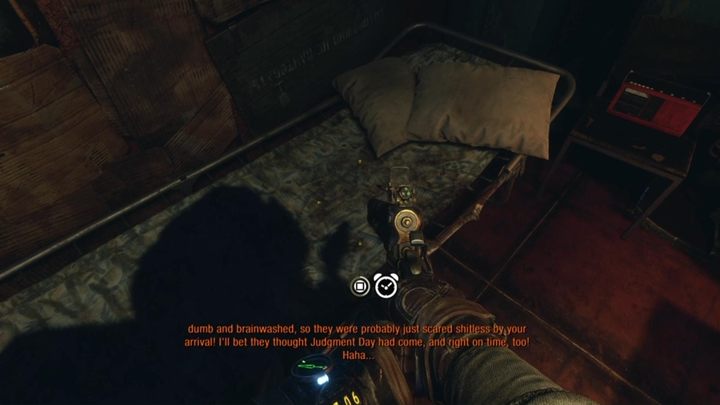 You can change the time of day when you get to bed and sleep in it. Some beasts only roam at night, but you're less visible - ideal when you need to sneak in somewhere. So try to choose the time of day to suit your current preferences - opponents have a better field of vision during the day.

You cannot return to once visited locations 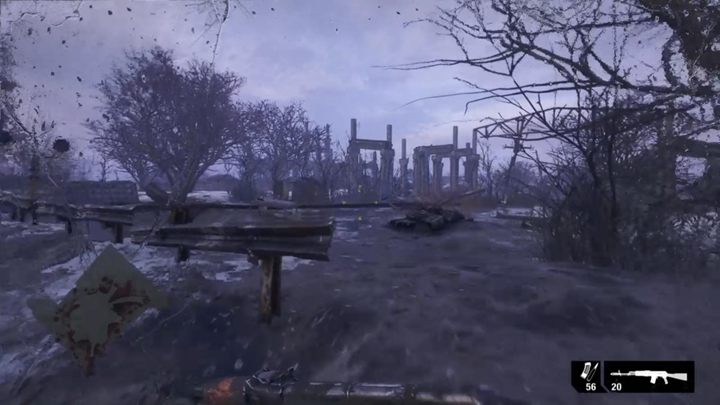 Moscow, Jantau, Volga and other locations are visited only once and you cannot return to them later. Therefore, you should carefully examine all locations and make sure that you already have everything you need from it at the current moment. 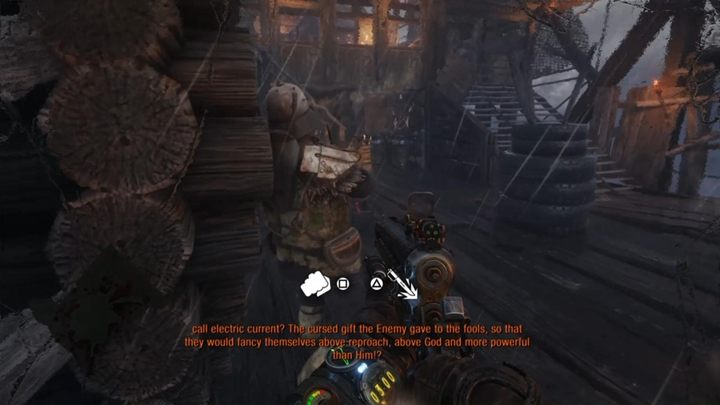 Enemies can be lethal and very accurate. It's best to plan your movements calmly and, if possible, neutralize some of your enemies from hiding. This will allow you to save a lot of ammunition and resources, and make it easier to fight with others. Killing everything you see will only pass at lower difficulty levels. 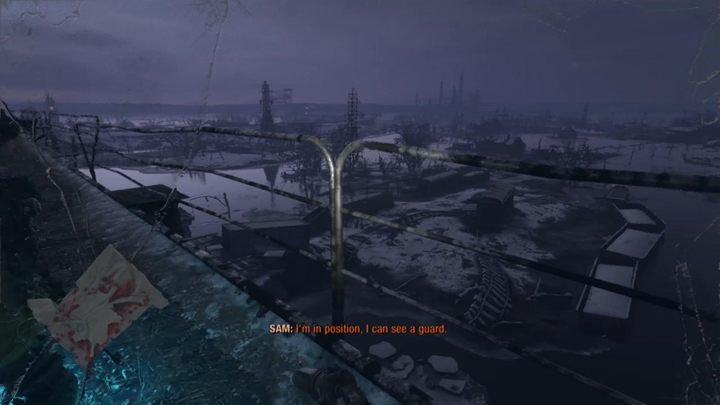 It is always a good idea to study the area thoroughly. In the game there are many places, cottages, branches from the main corridors, which do not have to be counted, and they contain useful items and improvements. Remember, however, that your survival is always a priority - it's not worth risking when you're heavily troubled. 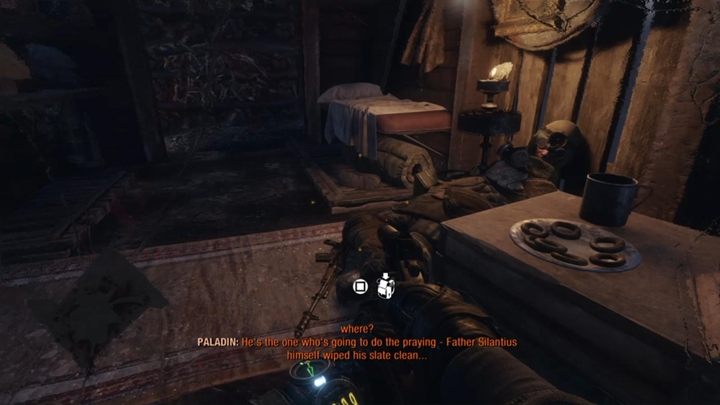 Collect raw materials from bodies and dismantle all lying weapons, even if you don't intend to replace them. Improvements (orange fragments), raw materials and ammunition fall out of the disassembled weapons. Always try to search the exact location where you currently reside.

You can replay selected chapters from the game's menu 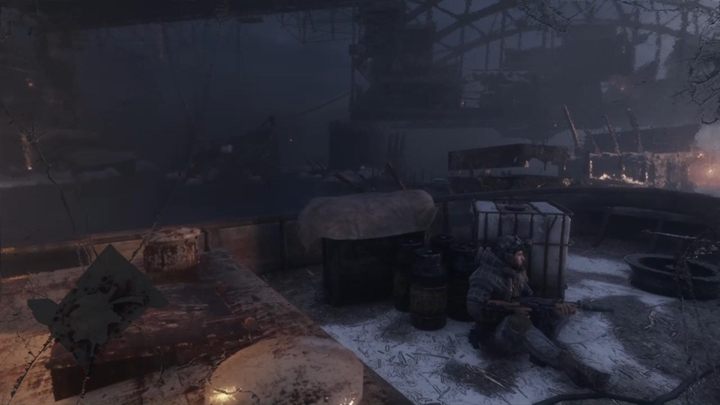 You can repeat previously played chapters, but additionally your autosave will be overwritten. It's a good solution when you've finished once and you just want to play the game again, perform an achievement or go back to find your way back.

Grenades and Molotov cocktails are not that effective 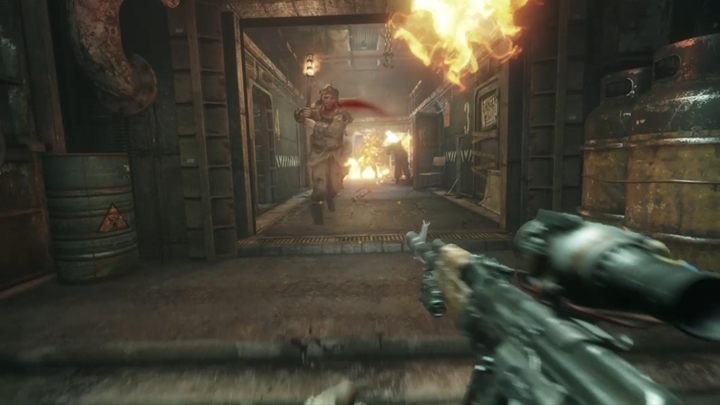 Molotov's cocktails and grenades are not as effective as they might seem. Creating them is a waste of resources. Many enemies will be able to escape, and fighting in narrow spaces is relatively rare.

Use sniper rifles on open maps 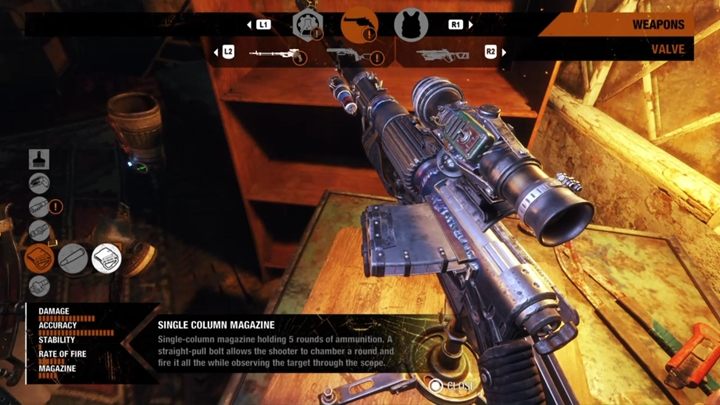 Sniper weapons are very effective on open maps (Volga, Caspian Sea), because they allow to eliminate people from very long distances and they are not respawned. In these stages it is always worth having a sniper rifle in standard equipment.

Explore the train and listen to the radio 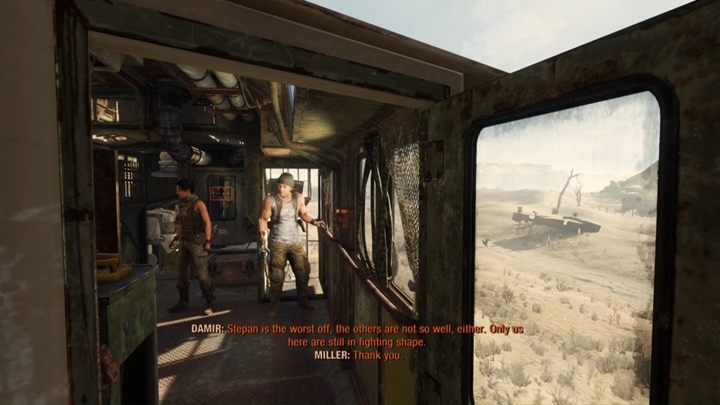 There is always a lot going on in Aurora. You can listen to many dialogues, take part in interesting scenes and get to know the whole crew better. You can even use a horn in a train. It is also worth to sit by the radio. Thanks to the broadcasts you will broaden your knowledge about the heroes, the world or the current situation.

When you visit the Caspian Sea... 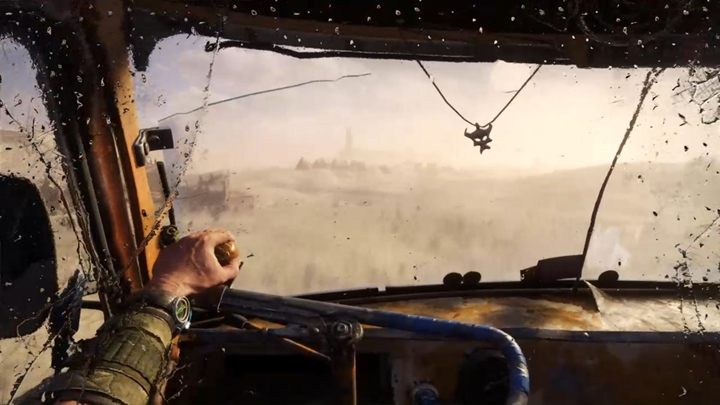 Once you have visited the Caspian Sea, make sure you go to the end of the passenger car, as you will receive incendiary bullets for Tichar. This is also the only time at this stage of the game where you will be able to use the workshop.

The UAZ car is not needed for anything, it only speeds up the journey in the Caspian Sea. If you miraculously block it so that you can't move it, don't worry. As the story progresses, the car will automatically be replaced in some locations.