The guide to Metro Exodus will let you uncover all the secrets of the new game from 4A Games. In our tutorial you'll find practical tips, information and hints to help you learn the key rules of the game. In this guide, you will, first of all, find a very detailed walkthrough of all storyline missions. In addition, in the FAQ section, you will find answers to your questions about the game.

On the first pages of this guide, you will find Starting Tips, which will make your first hours in the game easier. We have also prepared a lot of information about weapons and combat to help you learn about the most important mechanisms of the game. In this guide, you will also find a section devoted to controls, which will make your first moments in the game easier. We have also contained a trophy/achievement guide where we have put extra emphasis on the most difficult ones.

The game has a lot of important choices, some of them aren't as obvious. All of them are described in our guide. You can decide about the fate of Duke in the Volga, Damir in the Caspian Sea, and Alyosha in Taiga levels. These decisions have an impact on the game's finale which takes place in Dead City. Check how to get every ending and how to make sure that every companion stays alive until the end.

The chapter dedicated to secrets has maps helpful in locating the most important locations and side quests in the Volga, Caspian Sea, Taiga or Yamantau. With our guide, you won't miss any diaries, workbenches, postcards, or upgrades. We have listed the most important upgrades for your armor, gas mask, or gadgets such as a compass.

The walkthrough, full of high-quality pictures, is an important part of this guide. It will help you complete all locations, win the most important fights, and finish stealth sections. Metro Exodus has 5 difficulty levels - Reader, Easy, Normal, Hardcore, and Ranger Hardcore. Higher difficulty levels can be really challenging, even for FPS veterans.

As Metro Exodus is quite a demanding game, we have prepared a detailed system requirements section, where you will find not only an overview of the requirements but also numerous tips on how to increase the number of frames per second generated in the game. Smooth gameplay will make it much easier for you to play, and you will also have a much better chance of surviving in the destroyed world. On that page, you will also find information about the implementation of the RTX Nvidia technology.

Metro Exodus in a nutshell

Metro Exodus is the third installment in the series of FPS games developed by 4A Games. Like the previous installments, the game is based on the prose of Dmitry Glukhovsky. You play as Artyom once again. The task is to traverse post-apocalyptic Russia. You will visit Moscow, the Volga, the Caspian Sea, Taiga, Yamantau, and the Dead City.

In Metro Exodus, Artyom and his companions leave the metro tunnels of Moscow and set out to find a new home. The story of the game spans 12 months. During this time, the player will be able to see the seasons changing and their influence on the surrounding world. You can explore the world by using various vehicles, including the Aurora train.

Unlike the previous installments of the cycle, in Metro Exodus, we will be able to observe the dynamically changing weather, as well as the day and night cycle. In addition, the player's actions are supposed to affect the vitality of the companions, which means that we will be able to decide for ourselves who will survive this journey and who will not. Duke's, Damir's, and Alyosha's fates are in our hands - these choices will impact the game's ending.

We have prepared an extensive chapter focusing on starting tips for Metro Exodus. Check it to learn the most important information and tips for the game. Here are a few of the tips:

The full list of tips, along with in-depth descriptions, can be found in a separate chapter of our guide.

The PlayStation 4 version of Metro Exodus has a platinum trophy. Our guide will help you get all the trophies/achievements in the game. Many of them are difficult to obtain and you usually have only one chance to get them (e.g. Fisherman trophy/achievement in which you have to catch a large fish). If you fail, you won't get a trophy/achievement - check our guide to avoid any problems with unlocking them.

Secrets and important places on the map

Metro Exodus features the following locations: Moscow, the Volga, the Caspian Sea, Taiga, Yamantau, and Dead City. Our guide has the full list of secrets, side missions, and the most important locations. Thanks to the guide you will know where to find a teddy bear, a guitar, a compass pointing you to the next mission objective, thermal vision goggles, and other optional secrets.

The locations of hideouts, workbenches, armor, gas mask and gadgets upgrades are all marked on the maps. We have also dedicated a lot of time on detailed descriptions of the collectibles - diaries and postcards. Check these chapters if you plan on completing Metro Exodus in 100%.

There are two kind of collectibles in Metro Exodus - Diaries and Postcards. Our guide contains maps on which we have marked the locations of hidden collectibles.

Metro Exodus has a few less obvious choices that will impact some of the chapters and the ending of Artyom's journey. Our walkthrough includes descriptions of the following choices:

Also, the game summarizes our good and bad deeds - they will determine which ending, good or bad, you will get. What should I do to get a specific ending? Check our guide to find out more.

The FAQ section contains answers to various questions about Metro Exodus. We have listed topics that in our opinion are the most important for this game. Check these chapters to learn more about the game.

The walkthrough section is an important part of our Metro Exodus guide. We have described the most important moments and difficult parts. Our walkthrough describes all the locations - Moscow, the Volga, the Caspian Sea, Taiga, Yamantau, and Dead City. We have described all steps of Artyom's journey, taking place in all the seasons - Winter, Spring, Summer, and Fall. The walkthrough contains information about the most important fights, stealth parts, and objectives. Besides that, we have also listed tips that should help you complete every stage.

At the moment it is not possible to buy Metro Exodus on Steam. On this site, we will be able to run only the version of the game purchased before the release. The Epic Store platform will have one-year exclusivity for digital distribution of the game. All keys available in the boxed version of the PC game have an activation code for the Epic Games' platform.

What are the editions of Metro Exodus and what do they contain? 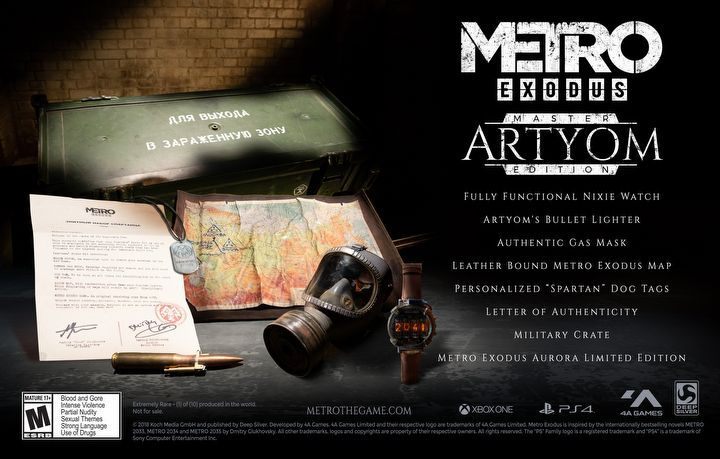 Only 10 units were made. You can try getting them at this site.

Pre-orders of the standard edition and the Golden Edition include:

Is Metro Exodus a prequel or sequel?

The story of Metro Exodus takes place in w 2036, i.e. two years after the events of Metro: Last Light. The game itself tells the story from after the book Metro: Last Light - Redemption. Similarly, to the two previous installments, the player controls Artyom. This time, the hero escapes the metro along with his companions.

Artyom, together with his companions, travels the destroyed lands using a locomotive called "Aurora." They are looking for a place where they can start a new life. The plot takes place within one year, starting with harsh winter.

Can I play Metro Exodus in cooperation mode?

No, Metro Exodus is a single player only game.

How long is Metro Exodus?

You will need about 20 hours to complete Metro Exodus. You can spend more time with the game if you decide to find all the secrets and collectibles. Higher difficulty levels make the game more challenging which is reflected by the amount of time you will need to beat it.

How is Artyom alive?

Metro Exodus tells a story that happens after the good ending to Metro: Last Light. A good ending is as follows: Artyom is stopped from using the detonator. Shadows will appear in the area and they deal with Korbut and his mercs. However, if you have chosen the wrong ending, in which Artyom sacrifices his life and dies, it will not be taken into account. The story in Metro Exodus tells the story of the hero's adventure after leaving the Moscow Metro.

Does Metro Exodus have an open world?

The world of Metro Exodus is divided into several different stages. The game is not a sandbox with one huge, open map. Some of the stages are linear levels, while others are large hubs, which can be freely explored. The world in Metro Exodus changes not only in terms of seasons. In the game, you can also observe dynamic changes in the weather and the day and night cycles. After reaching the Volga, you will be able to change the time by sleeping.

How to move between locations?

Artyom traverses the destroyed lands using a locomotive called "Aurora". It will allow you to move to the other parts of the world. In Aurora, you will also find your companions and you will be able to have new interactions with the crew. Besides the Aurora, you are able to use a few different vehicles (e.g. UAZ car) available in some of the locations.

Are there vehicles in the game?

On the larger maps available in the game, you can come across different types of vehicles. They make it easier to move around the terrain.

Remember, however, that the sound of the engine can attract mutants and other people. The majority of them are unique to a given region - in the Volga, you can use a handcar; the Caspian Sea has cars.

Does Your Voice Matter? Discussing Choices in Video Games

Will you kill a man and take his food, or will you go your way? Game developers have fallen in love with moral choices, but if you play enough games, you may start to feel that they have little to do with choosing, and even less with morality.

There are mechanics and narrative means, which almost no one likes, and yet creators are very eager to use them. One of them are the killers of good stories, the silent protagonists.

After all his life in the tunnels of Moscow's underground railway, Artiom sets out on a journey through Russia on a train, which begs the question  is this still Metro?