On this page of our Humankind guide you'll learn about infrastructure. They are special city projects which provide additional bonuses to the districts, the city or increase profits from basic resources.

Each city can build districts, fulfill shared projects such as Cultural Wonders or build infrastructure. These are special projects and buildings that increase the city's efficiency regarding obtaining resources, stability or the specialists' productivity. You create infrastructure in the Main Plaza. Unlike districts, it's not physically placed in the game world. Their bonus influences the city and all connected territories. The more buildings/projects like this you have, the more expensive they get.

There are several levels to most infrastructure projects or buildings. You can't build better infrastructure until you've completed the lower-level projects. Sometimes building infrastructure requires strategic resource - you won't be able to complete the project without them. However, you don't need access to resources to maintain the building. Once infrastructure is built once, its bonus exists for as long as the city does. Buildings and projects are only destroyed if the city itself is destroyed. 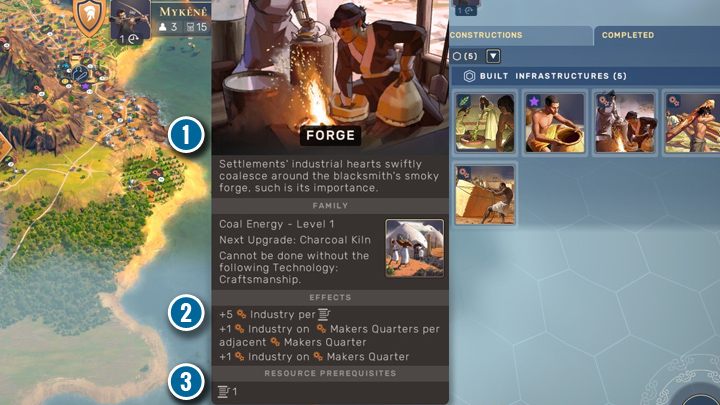 The Forge significantly increases the city's Industrial potential (1). For each strategic resource the city gains 5 extra Industry points, and each Makers Quarter benefits from the districts being close to each other (2). This upgrade requires you to have access to strategic resources (3).

It's worthwhile to choose projects that connect to already existing districts or compliment your city's development direction. Do you intend to create a trading center? You need to develop all buildings that increase profits from population, specialists or trade routes. A science-focused city with many districts will benefit from infrastructure projects increasing profits from specialists, tiles and research quarters. However, if your city doesn't provide much income in a particular area, it'd be a waste of time to develop projects increasing profits from that area.

Border cities will profit if you upgrade the city walls. That way not only will you increase their fortification level, but you'll also secure your squads during sieges. It's also worthwhile to focus on projects that raise the experience level of your units, as well as buildings raising city stability. Does your town rely on river tiles income? There are a few projects which significantly increase the profits you'll get from each such tile. You need to find a balance between building new districts and developing infrastructure. It's better to build districts first, then focus on special buildings which increase their income. You should start building infrastructure when your stability runs low, and a new district would just make it worse. Infrastructure consists of projects that help you build the city.