On this page of our Humankind guide you'll find descriptions regarding districts. Here, you'll learn everything you should know about developing your city with new districts or about special emblematic districts.

Cities in Humankind don't develop by increasing their population, adding new territory or upgrading their infrastructure. The main way of obtaining basic resources, such as food, industry, money and science, are districts. Each district collects a specific resource from surrounding tiles and gets neighborhood bonuses from, e.g. other districts. Properly upgrading the districts is mandatory to developing the city.

Each tile of the city is usually a district. Please note that the Main Plaza and the Administrative Center are also considered districts. Some bonuses depend on the number of adjacent districts of any kind. It's therefore very important to think their placement through. 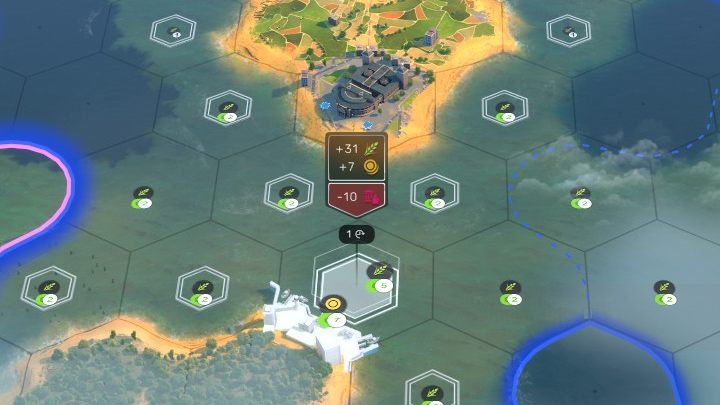 Harbors are unique districts. They can be built on any tile of our territory and collect income from up to 2 hexes away. All other districts collect only from adjacent tiles and need to be placed near the city.

There are several rules in play when building new districts:

Exploitation of tiles by districts and collecting FIMS resources

Each district brings FIMS income to its city. It doesn't matter whether it's located in the home territory or an annexed region. All income is added to the city's general budget. Each district can be exploited in one or several ways. For example, a farming district can only get food, the Hamlet collects food and industry, while the Train Station profits only off the surrounding industrial districts. 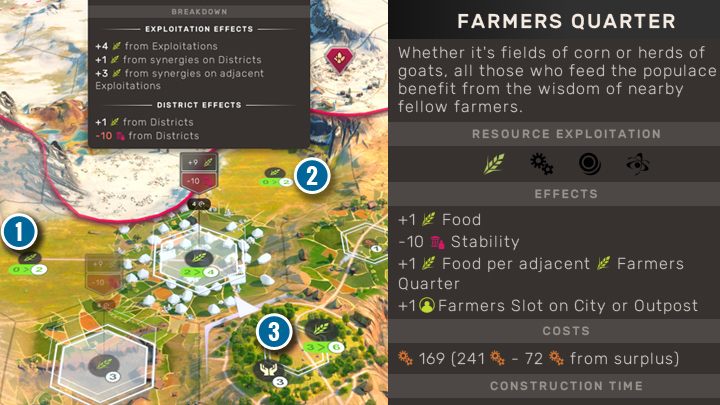 Each tile provides some resources. Better tiles provide several points of resources at once, sometimes even two or three kinds of different resources too. Districts collect resources from adjacent fields. However, if, e.g. a river tile provides food and industry, you'll need to build both a food district and an industrial district next to it to fully exploit it. Building all over such a tile leads to loss of resources, which aren't being collected by the newly constructed district. 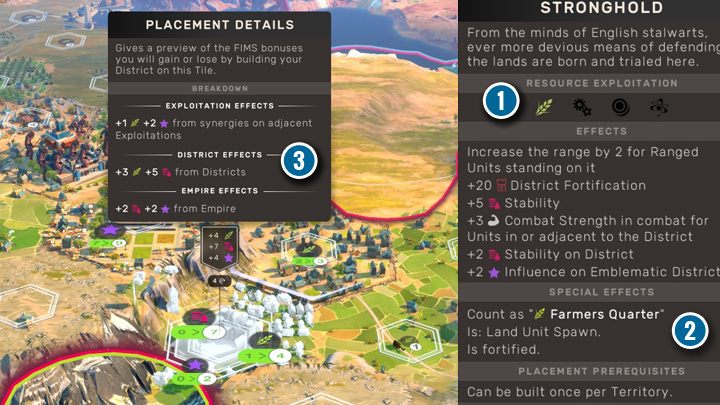 The special district of the English has several functions and brings different benefits. Each district can collect chosen income - in this case it's food (1). Additionally, the Stronghold counts as a farming district (2). Therefore, it gains adjacency bonuses from the other farming district (3).

Each culture has access to special districts with unique abilities. They can be described as "better" versions of generic districts. In any era, it's worth building as many of them as possible. Emblematic districts usually collect more resources and have unique additional effects. 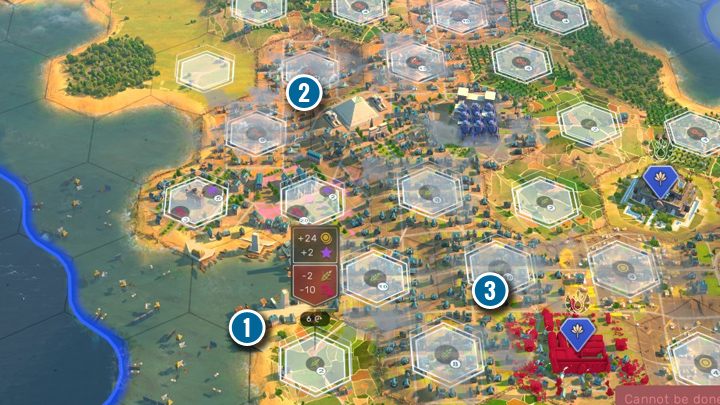 The game automatically shows you the best location to construct the district in (1). The Pyramid of the Egyptian Culture in the Ancient Era still provides many industry points (2). Districts cannot be built on top of luxury and strategy resources (3).

Each emblematic district can be built in any city region, if following one simple rule - each territory can only contain one emblematic district from a given era. Therefore, it's very important to place it in a strategically-sound place. If you've made a wrong location choice you can just plunder the district or build another one where it stands. Its construction will then become possible once again. 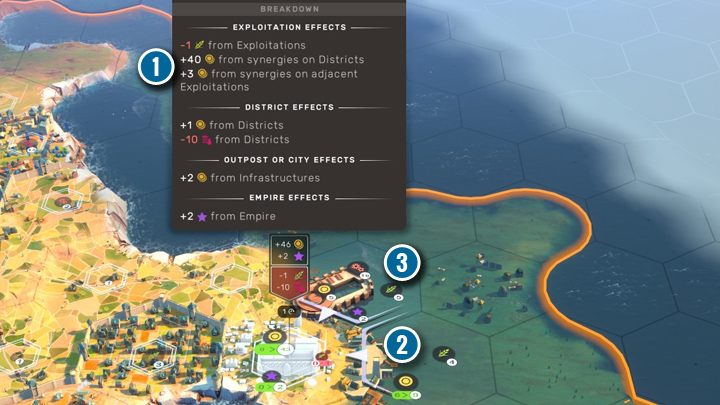 The Dutch's V.O.C Warehouse makes 20 gold for every harbor it's adjacent to (1). In this case, I've prevously planned to build a regular harbor (2) and the Cothon harbor exclusive to Carthaginians (3) to gain more funds from this new district. Planning out the city's development early can be a big help in the late game.

Most emblematic districts, aside for providing major profits, can also function as several district types at once or obtain different resources than they usually would with their adjacency bonus. For example, the canal system of the first age of the Harappans culture operates as an agricultural district - it provides additional food income and counts as a river! Therefore, all river-related bonuses also apply to this district. Continuing on, the Astronomy House of the Babylonians offers a science bonus for each adjacent farming district, but also offers adjacency bonuses to all farming and science districts. This means it also collects income from tiles that offer food and science. Properly choosing a culture and an emblematic district guarantees faster growth of the city.