This page of our guide to Humankind describes territories and how to connect them with the cities.

An unconnected outpost is not fully a part of your empire! Independent tribes can take it. Also, other nations with which you do not have a signed non-aggression pact can attack units and outposts in such territory. Only the connection of the region with any city of your nation makes it fully a part of the state. From now on, the other players must either sign an open-borders agreement with you or declare war on you. 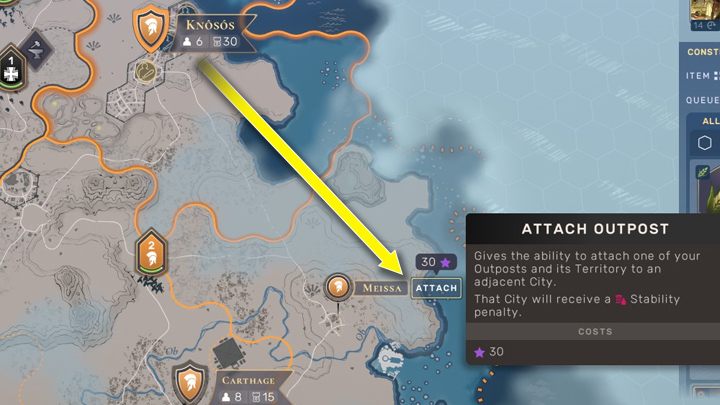 The first territory you add to the city requires a small amount of influence points. It is worth doing this if you want to further expand your city or secure the borders you share with other nations.

Costs and rules of connecting the territory with the city

Connecting the territory to the city requires Influence points. The first connection costs only 30 points, but the more connected regions a city has, the higher the cost. From now on, the outpost turns into an Administrative Center and now yields bonuses for infrastructure improvements. After connecting the region with the city, you can build new districts not only in the vicinity of your city, but also next to the Administrative Center. 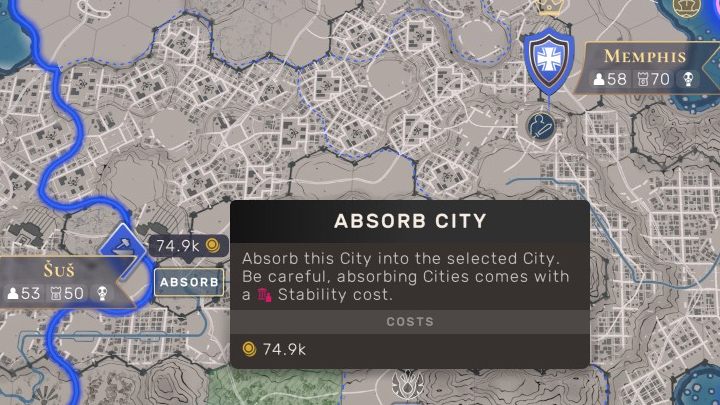 Connecting two cities is a big cost. However, there is a lot of money in the treasury, and I have an active special rule, thanks to which I do not have to use influence points. After the merger of cities, be sure to check the stability, because usually this indicator will fall.

There are several rules that modify the costs associated with the acquisition and annexation of territories. This will make your expansion a little cheaper, and that means you can conquer more regions in less time. It is worth doing the following, before building new outposts and incorporating new territories:

The merging of territories is an inevitable part of the development of your empire. You have to decide if, how much, when, and which territories to connect with the city. Optimally, each city should have 1 to 3 regions attached (if you control a large area). A large number of territories have a positive effect on the economy, but the siege of the city itself blocks production and stops the training of units. Remember that adding a territory to the city has its pros as well as cons! 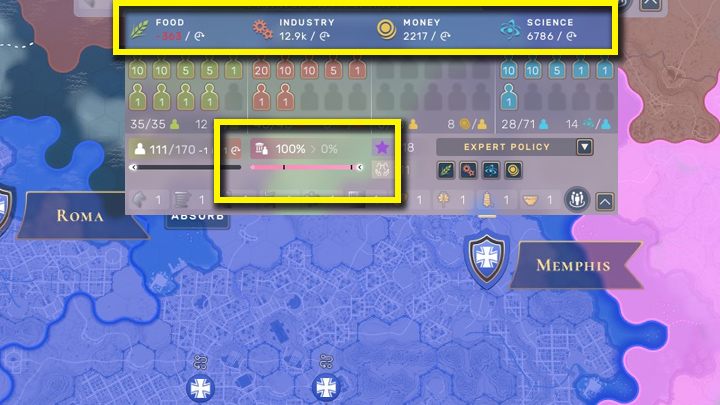 After the merger of two large cities, Memphis has a huge revenue of science and production. On the other hand, such a large population requires more food and the city will lose 1 inhabitant per turn. Also, the stability will fall to 0% in the next few rounds.

In each game you have to find the happy medium between a large number of small towns and combining all the territories into one big city. Usually it all comes down to the amount of controlled territories and the amount of Influence in your account. If the area is large and you have few points of influence, then you should build fewer cities, but with more connected areas. On the other hand, if there is little room for development, it is better to build more cities at the expense of connecting regions to the existing ones. It is worth paying attention to the list below and evaluate whether the pros are more favorable than the potential disadvantages.

Advantages of adding new regions to the city

Disadvantages of adding territories into the same city