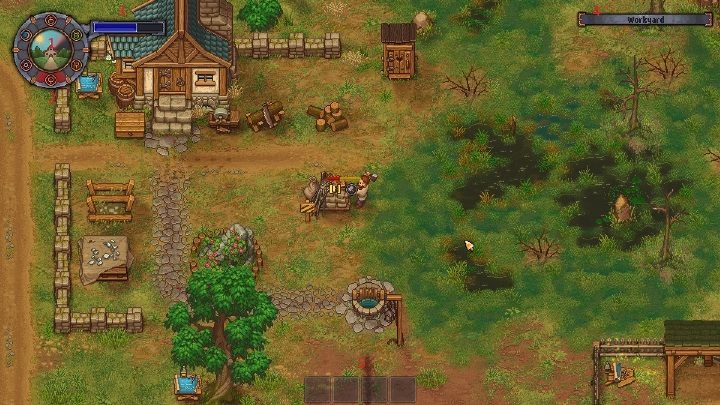 The interface in Graveyard Keeper is very simple and limited. It only shows the most important things. The rest can be checked with hotkeys. The controls scheme can be found in another chapter.

Graveyard Keeper features a day/night cycle. However, it doesn't impact the condition of the character - you don't have to sleep. The time of the day, however, determines whether other characters are sleeping in the city. After sundown, they go inside their houses and you can't talk to them.

The weekdays' only role is allowing special NPCs to appear at specific times. There are six special characters in the game, who are important to the story. The special NPC chapter can be found elsewhere in this guide and it contains character descriptions.

Graveyard Keeper's most important mechanic is energy. It allows you to collect resources, create items and fight enemies.

It can be replenished with food, drinks, and sleeping.

Since the map in Graveyard Keeper is quite large, each location has its own name. This will allow you to determine your whereabouts easily.

You can carry up to four of the most important items in the hand slots in Graveyard Keeper. What you need here, are items such as food or potions so that you don't have to stop the fight to find the right item in the inventory.