The game guide to Graveyard Keeper has been created for all first-time players. The guide contains a lot of practical tips that will help you play Graveyard Keeper, because the game can be complicated and unclear at the beginning.

Graveyard Keeper is a game based on exploration, meeting new characters and performing missions for them. We created pages that contain advice for missions and those that describe the world presented in the game. This will make it easier for you to find yourself in this strange land.

In the guide for Graveyard Keeper, you'll find information on how to upgrade your items and develop your character and their surroundings. We have also created pages with detailed descriptions of how to craft equipment. You will also find detailed descriptions of the resources and schematics required for technological development. We have also prepared pages about the tech tree and the points that can be gained in the game.

In the FAQ section, you will find answers to the questions you may have about the Graveyard Keeper in general. It contains information on combat, health regeneration and gaining money.

Graveyard Keeper in a nutshell

Graveyard Keeper is a sandbox RPG with strategic elements developed for PC and XONE. The game was created by Lazy Bear Games studio, a team known for the popular Punch Club.

The game allows the player to play the role of a cemetery owner. The cemetery is situated in a land full of monsters and various magical threats. Thanks to this, the player cannot complain about the lack of customers.

Graveyard Keeper tells the story of a character running their own, rather unusual for a video game, business. However, the developer does not take the plot very seriously, as it is full of black humor and jokes from the elements of the game itself. The player's role is to explore the world, carry bodies, dig graves and organize funerals. There is no character to help in the game, so almost everything needs to be done by the player's own hands. In addition, regular business decisions are also required. Apart from taking care of the cemetery, it is also possible to organize a witch burning festivals on the stake and establish cooperation with the local church.

The authors have included a lot of black humor in the game, which can be either a pro or a con for some players. You can sell hot dogs made of corpses near the cemetery, or sell body parts and blood. In order to reduce expenses, it is also possible to dump the remains into the river and arrange only faked funerals. This game requires from the player many interesting ideas and calculation of costs.

In Graveyard Keeper you will spend many hours exploring, completing missions, creating new items, organizing festivals, funerals and making business decisions. However, to make it easier for you to start the game, we have created a list of valuable tips that will help you get started. These tips mainly concern game elements responsible for exploration and crafting. They will make it easier for you to play during the first few hours of the game.

Graveyard Keeper is based on creating new equipment and objects. This is a very important mechanic, because without it you cannot move the game forward. We have therefore prepared pages describing crafting, acquisition of schematics, as well as the repair and improvement of tools for everyday use. This will ensure that you will never again stand before an iron deposit with a dull pickaxe and that you will be able to enjoy the game.

Missions in Graveyard Keeper allow you to follow the game's main storyline, but you can complete them any time you want and enjoy other aspects of the game in between them. We have prepared descriptions of some aspects of the mission in order to make it easier for you to complete the game without compromising your freedom.

In Graveyard Keeper, the dishes prepared by the character are important. Thanks to them it is possible to restore the energy and health of the character. We have prepared several pages dedicated to the farm and cooking, so that you will know how to prepare the best dish and what to do to be able to plant some carrots for the donkey.

Since Graveyard Keeper opts for a fantasy setting, it features magic and potions. Over time, your character will learn to create various kinds of potions. To make it easier for you to get to know the basics of alchemy, we have prepared several pages describing various potions and how to prepare them.

In the last chapter of the guide you will find a description of the technical aspects of Graveyard Keeper. We have created a detailed description of the hardware requirements, which will allow you to determine if your computer will be able to run the game. However, the game is not very demanding, so it should work even on older computers and laptops. Additionally, we have prepared a list of achievements that can be earned in the game and we have described them in detail so that you can quickly reach 100% completion.

We have created a short table with the default controls for Graveyard Keeper. A collection of all the key will help you quickly find your way in the dynamic game and make it easier for you to enjoy the game.

Will my PC run Graveyard Keeper?

Below we present the minimum hardware configuration required to run Graveyard Keeper on PC. The game has no graphics options, that would allow you to lower or increase the quality of textures and other graphic elements. 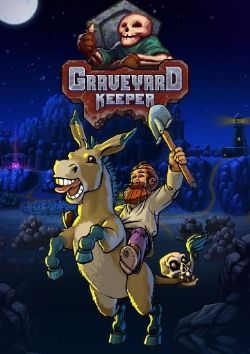 Graveyard Keeper is a sandbox RPG with strategy game features. It was released on PC and XONE and developed by Lazy Bear Games, a studio that created Punch Club.

The game focuses on a topic that is rarely seen in video games. It enables the player to assume the role of an owner of a graveyard. The business is located in a typical fantasy realm that is filled with monsters and various magical dangers. Because of that, there are many clients interested in the players service.
The creators did not attempt to create a serious scenario. The story is filled with dark humor and it frequently ridicules typical fantasy tropes.

Graveyard Keeper for PC and XONE enables the player to run his own business. However, the game doesnt become an economic strategy, but a role-playing title. The owner of the graveyard is a specific character that is controlled directly when exploring the world, moving bodies, digging graves and organizing funerals. The player must do almost everything personally, but at the same time he needs to frequently make business-related decisions.

Burying the bodies isnt very profitable and the costs are quickly increasing. The player must look for valuable resources that are used to construct useful items and upgrade the graveyard. The most profitable and most dangerous are trips to the undergrounds that are filled with monsters. The player can use many alternative ways of increasing his profits. He can organize witch burning festivals or he can cooperate with the local church that will pay for scaring the citizens so that they go to the church more frequently.

The developers provided players with great freedom when it comes to cost optimization. For example, instead of buying expensive meat, the player can make hot dogs out of corpses and sell them next to the graveyard. He can also sell body parts and blood. To reduce costs, one can throw remains into the river and organize fake funerals.

Graveyard Keeper for PC and XONE offers retro graphics filled with large pixels. The developers decided to use cartoonish style. This diminishes the grimness of the game a little and corresponds well with the comedy style of the title.