Solution: You will probably be given a chance to begin this quest early during the course of the game (if you decide to help Burke), however I would recommend waiting. It's not that you have to deal with powerful monsters, but in order to ensure your victory you may need a lot of points spent in lockpicking, science or speech. I think that when you advance to the 10th level of experience you may give it a shot. In order to begin this quest you must gain access to the inner area of Tenpenny Tower. Listen to a short conversation between a guard and a ghoul when you arrive here for the first time (screen). Use the intercom and convince the guard to let you in. Talk to chief Gustavo who should automatically approach you. If not, you can usually find him near the barracks or at the front desk, inside the tower. Listen to Gustavo complaining about a ghoul problem and offer your help in getting rid of these creatures. Don't worry - even if you plan on helping the ghouls you will have a chance to change your mind in the near future. You can also convince Gustavo to increase the reward for taking care of the ghouls. Not only can you receive more caps from him, but he may also give you an assault rifle, so it's definitely worth to negotiate terms with him. 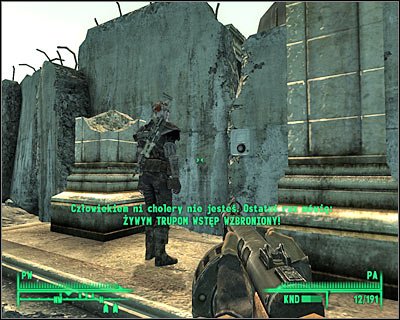 The area you need to get to is Warrington trainyard. Gustavo will only mention the trainyard during the initial conversation, so you'll have to ask him to mark the location on your map. Ignore Warrington station for the moment, because you can't access it from the surface. Once you've reached the trainyard use the door to get to the subway tunnels. The surrounding corridors are being occupied by feral ghouls. I would recommend using a shotgun against them, because it's very effective at close range. Prevent the monsters from surprising you. You should also watch out for radiation - don't go near any barrels and you should be fine. Eventually you'll get to an area where you'll be greeted by Michael Masters. Follow his instructions and holster your weapon. Talk to Masters, but you won't have to ask him about anything in specific, because he's only a guard. Head back down and proceed towards an opened gate. You should be able to get to a small room (screen). This is where the ghouls are hiding. Go in and make up your mind on how you want to play this out. 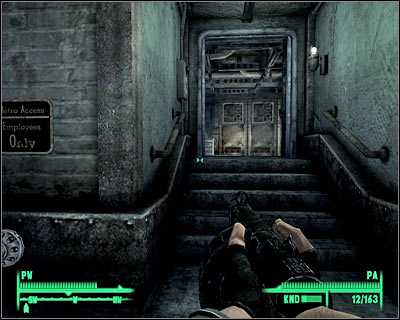 During your initial conversation with Roy you'll find out that it's his dream to find a place for him and other ghouls inside Tenpenny Tower. Promise Roy to help him in that matter and return to the tower. Enter the building and use the elevator to reach the apartments. Now you'll have to get to an apartment owned by Tenpenny himself. As you've probably noticed, the door is being guarded by one of his men. You can use persuasion, steal the key from the guard or from chief Gustavo, kill the guard or brake-in. Either way, you must get to an elevator which will take you to the top of the tower. Once you've arrived at your new destination, talk to Tenpenny and explain him the situation with the ghouls (screen). You'll find out that Tenpenny will agree to welcome them inside his establishment as long as some of his tenants won't mind. 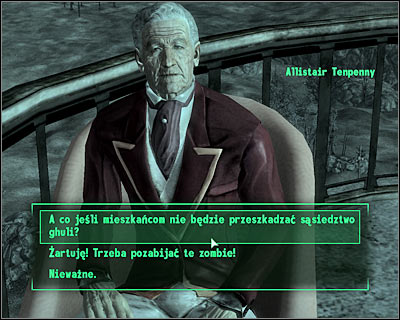 Tenpenny will give you a list of people who need to be persuaded into letting the ghouls live in the tower. They are Anthony Ling, Lydia Montenegro, Susan Lancaster, Edgar Wellington II and Micky Wellington. The most obvious solution here is to use your high speech skill in order to win a speech challenge. Each time the conversation is going to be very similar. Using your persuasive skills you must convince the tenants to agree to your proposal (screen). Notice that you will receive positive karma for every successful speech challenge. If you don't mind losing some karma you may use your primary weapon to kill each person on the list, but you must eliminate them silently (for example - during the sleep), so they won't raise an alarm and they won't turn other tenants against you.

There's also a third way to resolve this situation. You can get rid of Anthony Ling and Lydia Montenegro by opening safes in their stores. As a result, they will be accused of stealing and thrown out of the tower. As for the remaining three, go to Susan Lancaster's apartment and find a love letter she received from Edgar Wellington II. Read the letter and find Micky Wellington. Show the letter to Micky and you won't have to worry about her, Edgar nor Susan anymore.

Once you've convinced or killed all five tenants go back to Tenpenny and say that you've finished the job. Tenpenny will hold on to his promise, so you can go back to the sewers. Talk to Roy and tell him the good news. Roy will give you a valuable artifact, called ghoul mask. Basically what this item does is that it makes feral ghouls ignore you. 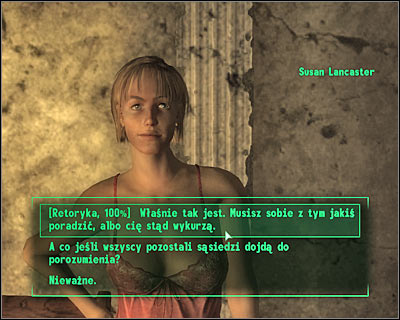 The most obvious negative solution is for you to kill all the ghouls (screen) located in the subway. Doing this you'll grant Gustavo's wish. You shouldn't have any problems eliminating these creatures. There are only a few of them and they're not using state of the art equipment. Make sure that Roy is amongst the killed. Once you've killed the ghouls and looted their bodies go back to Gustavo. Talk to him and he'll reward with the exact amount of caps he promised before. 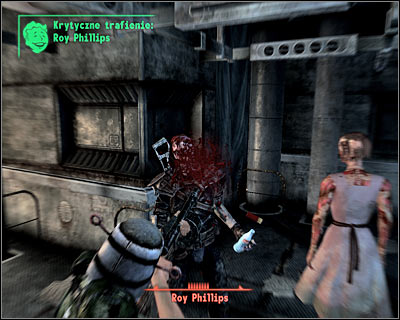 There's also an alternative negative solution to this quest, but it requires you to ally yourself with the ghouls in order to help them in taking over Tenpenny Tower. If you're feeling cocky you can kill all the inhabitants yourself. I have to warn you - it's not going to be easy, because the tower is being protected by a lot of armed guards. I would recommend listening to what the ghouls have planned. Roy Phillips will ask you to open an underground passageway for him, connecting the tower to the subway. This will allow Roy to smuggle a large group of feral ghouls into the city in order to begin mass murder. For now you must return to Tenpenny Tower, because you can't go anywhere with this assignment from here.

Your first assignment after returning to the tower will be to acquire basement key. You can try and pickpocket Gustavo, however it's not going to be easy during the day. The best moment to steal from him is to wait for him to go to sleep (screen). You should succeed as long as there aren't any other guards in the area. Take the key to Tenpenny generator room. If you don't want to wait for Gustavo to go to sleep, you can find Herbert Dashwood, because he holds a spare key. Convince him (speech) to give you the key or steal it from him if you're skilled enough. 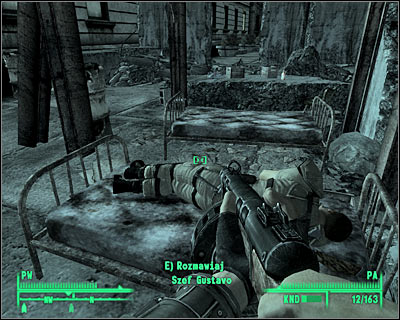 Make sure that you're standing outside, but inside the perimeter. Look at the screen - go there and use your newly acquired key to open a door leading to the generator room. There's a security terminal nearby and you can hack into the system. Thankfully it's a very easy task, because this system uses one of the weakest protections against hackers. Choose Open the containment door option from the main menu. If you don't have any science skills, you can ignore the terminal entirely and use one of your guns to blow up a nearby generator. Either way, you must open this passageway. Approach the window and listen to Roy. Agree to meet him near the main entrance to the tower. Go back the same way you came and proceed to the main door. This is also a good moment to choose a good weapon from your inventory. I would recommend using a shotgun, especially since that feral ghouls will do all the dirty work for you. 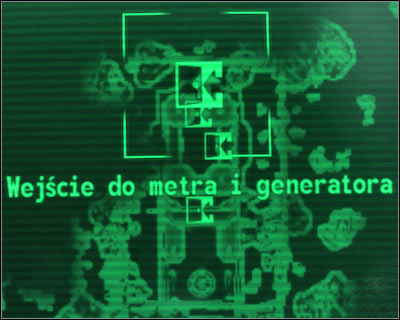 Roy will now give you a very interesting artifact, called a ghoul mask. Put it on. The mask will protect you against feral ghouls, because as long as you don't bump into them they'll ignore you. You can enter the tower. Assist Roy and his ghouls in taking over this entire building complex (screen). Obviously this means you'll have to hunt down and kill every inhabitant of the Tenpenny Tower. There are three levels for you to secure. Start off with the ground floor. Make sure you've checked all stores, as well as the clinic and the bathroom. After that use the stairs to get to the upper apartments. Finally go back to the main hall and use the elevator to get to the upper suites. I guess you won't be surprised to hear that Tenpenny will be amongst the killed, however someone else will probably kill him for you. Find Roy once the battle has ended and he'll thank you for your help in securing the tower. 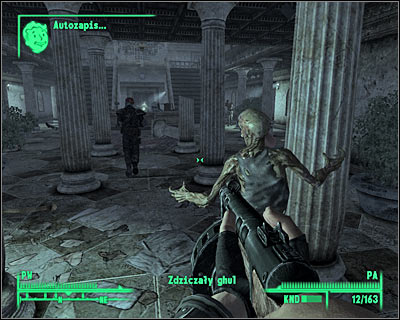