High-tech Allies is a quest in Elex that allows you to join the Clerics faction. The quest itself is very short because it requires you to gain the faction's approval by completing other quests that you can get from its leaders and members.

IMPORTANT NOTE – Joining the Clerics cancels quests that can help you joining the Berserkers and the Outlaws. The main hero can only be a member of one faction. 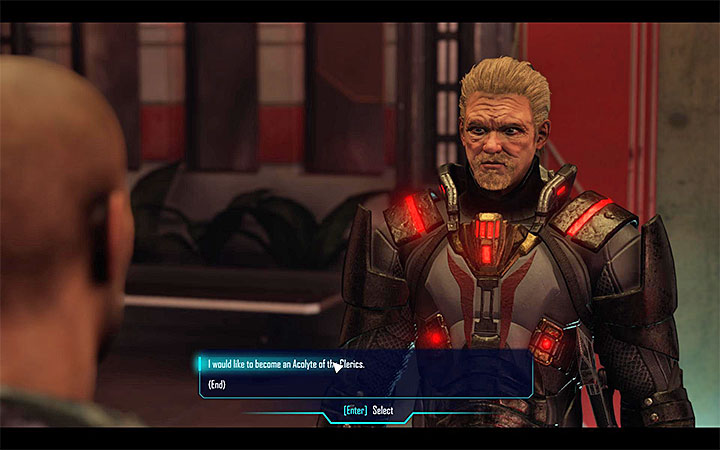 The person that decides who can join the Clerics is Judicator Reinhold in Cathedral in The Hort city. The most important quest that you can get from him is Subversive Elements in which you must track a person that trades Elex. Besides completing this one you must also finish a lot of other side quests for the Clerics. The most important ones are received from Martha and Hagen.

When you ask Reinhold about your current approval level he will check your completed quests for the Clerics. After that he will make a decision. This triggers one out of the three responses:

Joining the Clerics gives you 3000XP and 500 Elexit for completing Subversive Elements and 2700XP for reaching the lowest rank, Acolyte. You also get Acolyte Armor, PSI Amplifier (deals PSI damage) and 1 Clerics ability point (a new ability category unlocked). Also, you now have access to new items that you can buy in the Clerics' city. You can also try to get promoted to Legate rank – the description can be found on the next page.