The unofficial guide to Elex includes a complete collection of info and tips that can be helpful in completing the game and exploring the vast world it offers. The following guide is divided into several large sections.

First large chapter features a FAQ - how to get rich quickly, how to gain levels efficiently, how to survive your first moments in the game, and many, many more.

The later section of the guide features a detailed walkthrough for Elex; also this one was divided into a number of smaller chapters. The walkthrough begins with a world map, featuring starting points of essential quests. Subsequent pages of the guide feature detailed descriptions of quests, divided into several categories. Separate chapters have been dedicated to a walkthrough for the main story quest line, as well as walkthroughs for companion quests, faction quests and side quests. The latter have been sorted depending on the starting location.

After that you will find chapters with various advice, related to combat, exploration, questing, NPC conversations, crafting, theft, or hacking among others. The next large section is dedicated to character progression, including some suggested builds and advice on how to best spend points on attributes and skills.

Later chapter focuses on the game's main three factions. It describes how to join each of them, what each of them represents, and what are their most important pros and cons. The last section of the guide revolves around collecting trophies. It features a complete list of achievements and trophies, including description for those that may be more difficult to unlock.

The atlas included in our guide begins with a high-quality world map, featuring the marked locations of cities, teleports, large settlements, and other important spots. The map is divided into several smaller sectors, each of them having their dedicated pages in the guide, which will help you learn more of the game world's many areas. Separate pages have been dedicated to key in-game locations, featuring info about their residents, services they provide, quests that can be found in the area, or which factions resides there. The second large section of the atlas features various summaries. They contain various information concerning, e.g. the location of skill trainers, vendors, legendary items, or elex flasks, which provide an instant experience point bonus.

Elex is a vast RPG game from Piranha Bytes, a developer team famous for the subsequent installments of the Gothic series. Their latest work shares many similarities with Gothic, but also many completely new elements. The biggest difference is brought with the game world. We are transported to the planet Magalan, which suffers from aftereffects of a meteor impact. In the planet's new, post-apocalyptic environment magic coexists with hyper-advanced technology, and elex, the mysterious new element brought to this world by the asteroid offers new, unheard of possibilities. The game offers vast freedom of choice when it comes to character development, or joining one of the three vastly different in-game factions. Each of them provides different quests and different means of dealing with them. 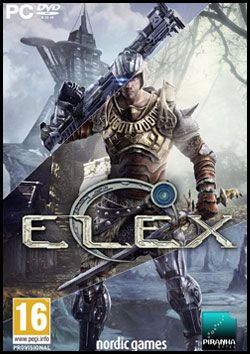 A third person action-RPG developed by the creators of the legendary Gothic series - German studio Piranha Bytes. In contrast to the aforementioned Gothic, Elex is set in a dark post-apocalyptic universe that combines elements of both science-fiction and fantasy and where technology meets magic. In terms of mechanics, the game is similar to other modern action-RPGs. You get to explore a large open world, embark on a series of storyline missions as well as side quests, encountering numerous non-player characters along the way and, of course, slaying a wide array of monsters. Similarly to previous Piranha Bytes productions, the title features only single player gameplay with no online features.

Elex Interview - If we were to do another Gothic title, we feel like were in a closet

How much Gothic can we find in Elex? How will our cooperation with factions work? We had a chance to talk to Bjorn Pankratz, the game director at Piranha Bytes, and we asked him to shed some more light on their upcoming RPG.

Elex Game Guide is also available in our Mobile App