Doom's single player campaign offers players a lot of weapons. This chapter contains the full list of all available weapons and grenades. We have also listed their modifications and tips on how to unlock their masteries.

General information about the weapons 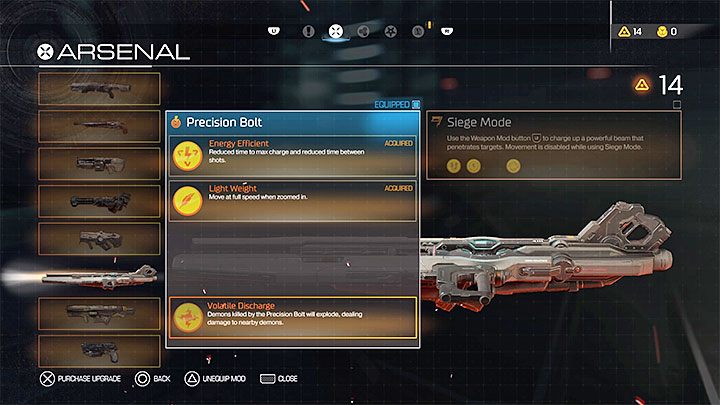 The most powerful weapon in the game. BFG is obtained automatically during Advanced Research Complex level. This gun doesn't appear in the weapons wheel. Instead, you have to press one of the buttons to equip it. BFG is used sparingly due to its limited ammo. Because of that you should always be sure that each shot will kill as many demons as possible.

BFG doesn't have any modifications nor upgrades.

Chaingun is one of the best weapons in the game. It deals a lot of damage but it also slows the Doom Marine down. Chaingun needs to spin-up before it can start shooting. A great weapon against slow and heavily armored enemies.

This weapon has two modifications - Gatling Rotator and Mobile Turret.

This modification doesn't have any direct offensive capabilities. Instead, it allows you to continuously spin the barrels. Thanks to that you can start shooting without waiting for the Chaingun to spin-up. A good choice if you want to always be ready to use the Chaingun.

The mastery requires you to kill 5 demons in 5 seconds. This challenge can be easily completed by fighting with weaker demons. Wait for them to get closer to each other, preferably in a small room or a corridor.

This modification increases the Chaingun's firepower by turning it into a mobile turret. A good modification against powerful demons. However, you must remember that the Chaingun can overheat in this mode - this means that you can't shoot without any breaks.

The mastery requires you to kill 4 demons during a single Mobile Turret deploy 5 times. This challenge isn't difficult to complete. Wait until you get surrounded by at least 4, preferably weaker, demons. Lesser demons die fast which means that your Chaingun won't overheat.

Chainsaw is a unique weapon that allows you to eliminate enemies at a close range. You can find it in Resource Operations level. The Chainsaw doesn't appear in the weapons wheel. Instead, you have to press one of the buttons to equip it. Killing a demon requires one or more fuel tanks (up to five) - this depends on which demon you are attacking. Its advantage is that enemies can't defend themselves from Chainsaw attacks.

Chainsaw doesn't have any modifications nor upgrades.

A double-barreled shotgun. This weapon is found later in the game. Owning it doesn't mean that you should forget about using the standard Shotgun. Both weapons have different usage and upgrades. Super Shotgun is great when you want to deal a lot of damage at a short distance. You should also prepare yourself to reload more often.

Super Shotgun has only one modification - Improvements.

An unusual modification because it doesn't require you to activate it manually with a button. Instead, makes the Super Shotgun more efficient. Regular modifications shorten the reload time and give you penetrating shells.

The mastery requires you to kill more than one demon with a single shot 30 times. This challenge isn't difficult, it only requires a little bit of time. Look for chances to shoot lesser demons when they are standing in a straight line or when they are right next to each other.

Gauss Cannon is the most powerful regular weapon in Doom. Just like the Chaingun, this weapon is great when you are fighting against slow and very durable demons. Don't expect to be able to move fast when you have this weapon equipped. On top of that, the Siege Mode modification forces you to stand still when you are using it. 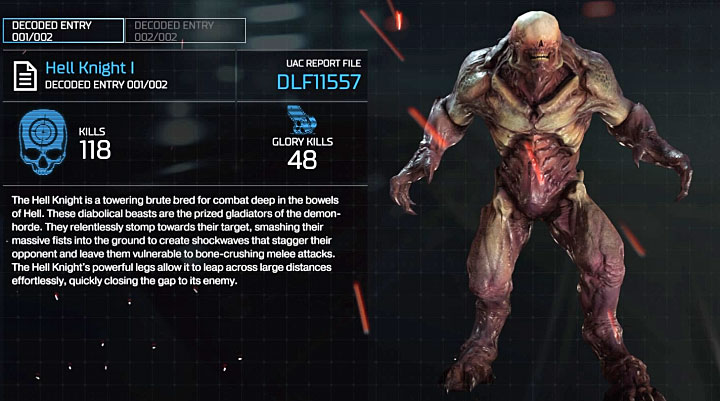 The mastery requires you to kill 5 Hell Knights with the Precision Bolt modification. Wait until you encounter these demons (check the picture above if you forgot how do they look like). These monsters move around rather fast which can make aiming more difficult. Try to move away from a Hell Knight, stun him (e.g. with the Plasma Rifle) or weaken him significantly (he won't move). Also, remember to aim at the head or close to it.

This modification turns the Gauss Cannon into a STATIONARY cannon with enormous firepower. The weapon shoots a powerful energy beam but you won't be able to move during the charge time. Siege Mode can be very helpful in killing stronger demons but you have to use it wisely - do that only when there are no other monsters nearby.

The mastery requires you to kill at least 3 demons 10 times with Siege Mode. Look for weaker and slower demons. Corridors are the best place for this challenge - it is more probable that demons will stand in a straight line.

Heavy Assault Rifle is one of the most frequently used weapons in the game. This rifle is great in eliminating weaker enemies and weakening the stronger ones. Depending on which modification you are currently using, Heavy Assault Rifle can be used as a weapon for precise shots or it can deal massive damage.

The titular scope grants the Heavy Assault Rifle sniper capabilities. Always aim at heads, especially when you already have Skull Cracker, one of the regular upgrades.

The mastery requires you to kill 50 demons with a headshot while aiming with the Tactical Scope. Attack the weakest and slowest demons - they are hard to miss. Also, you can be sure that a single headshot will finish them off.

Heavy Assault Rifle can now shoot small missiles. They are great when you have to quickly fire at a group of enemies (Micro Missiles can hit multiple targets) or when you want to weaken a larger demon.

The mastery requires you to attach 4 Micro Missiles to different monsters in less than 5 seconds. The description can make this challenge look complicated but it really isn't that difficult to do. Simply wait until you encounter a larger group of enemies. Missiles don't have to kill them, they only need to get attached to different targets.

UAC EMG Pistol is the weakest weapon in Doom. This is your starting gun. The Doom Marine gets his hands on a much more powerful Shotgun after a few minutes into the game but this doesn't make the Pistol useless. You can still use it to attack weaker demons. However, you should remember to use charged shots because they deal more damage than the regular fire mode. The Pistol's unique feature is that it has unlimited ammo.

Pistol has only one modification - Charged Energy Shot.

This modification allows you to use charged shots. It reduces the Pistol's fire rate significantly but these charged shots deal much more damage. Useful against slower demons - you can charge up your shot without any problems, aim and finish a demon off with a single shot.

The mastery requires you to kill 15 demons with a headshot while using Charged Energy Shot. This isn't difficult to do. Target the slowest and the weakest demons. A single charged shot should be enough to kill them.

Plasma Rifle is one of the most frequently used weapons during Doom's campaign. Its plasma projectiles don't deal a lot of damage and they aren't effective against stronger demons but the rifle itself has a very high fire rate. Another advantage of this weapon is the availability of ammo supplies.

The mastery requires you to kill a few demons with a single Heat Blast 20 times. The game counts only those Heat Blast attacks that have killed at least 2 demons. Charge up your weapon, find a group of weaker demons, get closer to them and then release the Heat Blast.

Thanks to this modification you can shoot a special projectile that stuns nearby demons when it explodes. Use it to stun groups of weaker demons or single powerful enemies. However, you can't use this attack very often - it needs time to charge up.

The mastery requires you to kill 30 stunned demons. A simple challenge - you can use this attack on weaker demons. You should have enough time to kill stunned enemies before this effect wears off.

Rocket Launcher is one of the heavier weapons in Doom. However, it doesn't slow you down as much as Chaingun or Gauss Cannon. It is also a very versatile weapon - you can use it to attack single powerful enemies as well as groups of demons. The only problem is that you can run out of ammo really fast.

Detonate rockets when they are still mid-air (before they hit a target). This modification can be useful (especially when your target has moved) but you always have to pay attention to where a rocket is flying so you can detonate it in the best possible moment.

The mastery requires you to kill at least 3 demons with Remote Detonation 15 times. You can have problems with completing this challenge due to the fact that each of the 15 explosions has to kill at least 3 demons. Try to use this modification every time you face the weakest enemies. Be very careful - you don't want to detonate your rocket either too soon or too late.

Keep your crosshair on a demon for a brief moment to shoot three rockets that will move towards that target automatically. In our opinion, this modification is much better than the one described above. The default purpose of the Rocket Launcher is to attack stronger demons - this modification is perfect for that because it allows you to deal even more damage. Remember to be on the move when you are targeting a demon. 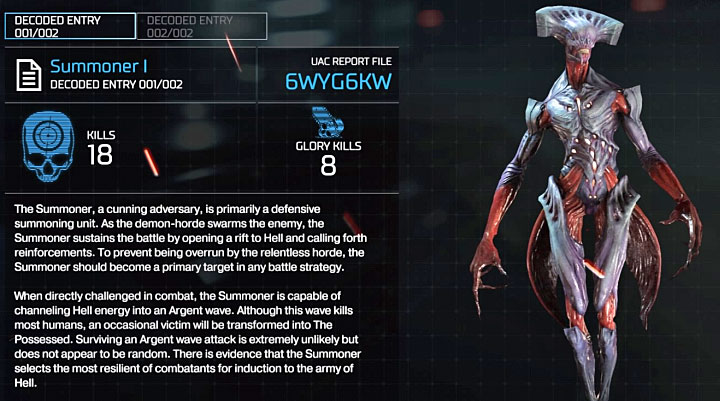 The mastery requires you to kill 5 Summoners with Lock-On Burst. The picture above shows how this demon looks like. Summoners often teleport around an entire battlefield so don't worry if your first shot misses the target.

Combat Shotgun is found within the first few minutes of the campaign. Unlike the Pistol, this weapon is also useful during fights with more powerful demons. Attack them at a short and medium distance. Combat Shotgun isn't useful against targets that are far away. Ammo isn't a problem for this weapon. It can become even more powerful once you unlock its modifications. 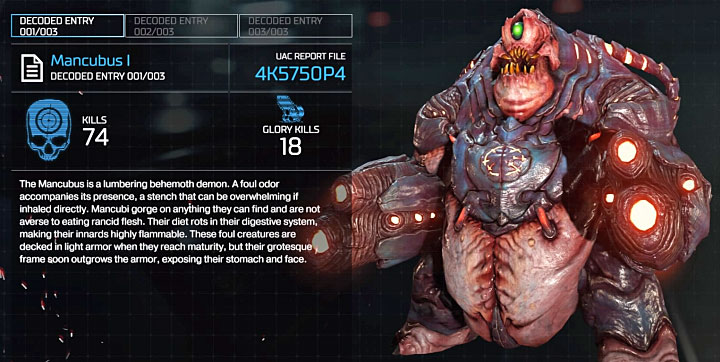 The mastery requires you to kill 5 Mancubi with a Charged Burst. The picture above shows how this demon looks like. Mancubus is a very durable monster - think about weakening him before you use a Charged Burst. Also, try to use this attack from a really short distance to deal the maximum damage.

This modification turns the Combat Shotgun into a grenade launcher - projectiles shot with it act like grenades. They don't fly in a straight line like bullets do. Explosive Shot has various uses - it can weaken stronger demons or it can be used to attack groups of enemies. 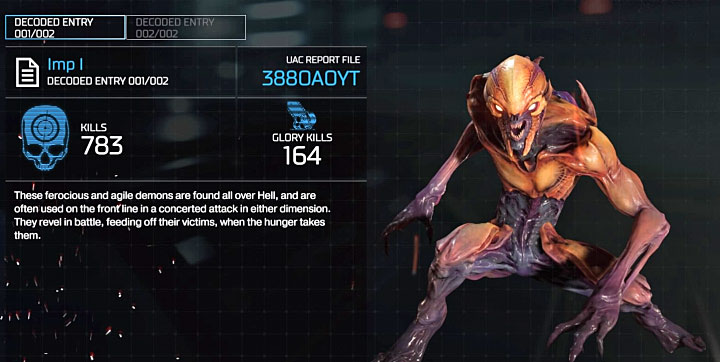 Besides weapons, the Doom Marine can also use various grenades. They work similarly to abilities which means that you have to wait a bit before you will be able to use them again. Grenades can't be upgraded nor modified.