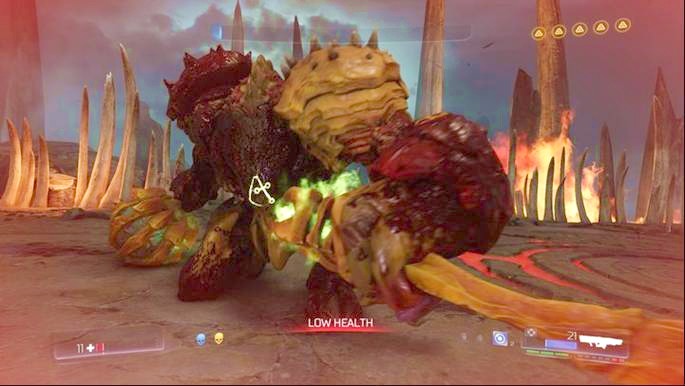 The Hell Guard is an opponent who has many different attacks. However, if you learn to avoid them and know when to counterattack, then you shouldn't have trouble with defeating him. During the battle you must remember to collect ammunition and health that sometimes drops from the boss. Below you will find a list of all attacks of the beast.

His basic ability is a green shield which he creates around himself. When that happens, the Hell Guard becomes completely invulnerable for any attacks, so don't waste your ammunition. You should attack the enemy just after the shield disappears. Homing missiles and a charged Gauss Cannon shot are effective.

During most of the battle the demon will be trying to run towards you and melee attack you. Because of that, you should always move to the sides and to the back. This attack has a weakness - just before it is performed the beast removes its shield. If you hit it then with rocket launcher, not only will you deal great damage, but you will throw the best away, avoiding the attack as well.

Once every while, the beast will use energy shield in order to shoot three powerful balls. You can avoid them, but it is better to use this time for a counterattack. When the beast starts charging the ball in front of it, try destroying the ball with a fast weapon. This will not only stop the attack but additionally it will stun the boss and allow you to attack him.

Quickly run as far away as possible when the beast starts hitting the ground with its weapon. Sun after that, three spikes will fly in your direction. It is easier to avoid them from distance.

The enemy can also throw his weapon. When you see that he prepares to a throw, run as far away as possible. Sometimes the throw is accompanied by fire bullets. Avoiding them isn't easy, but if you are far enough, they should miss. 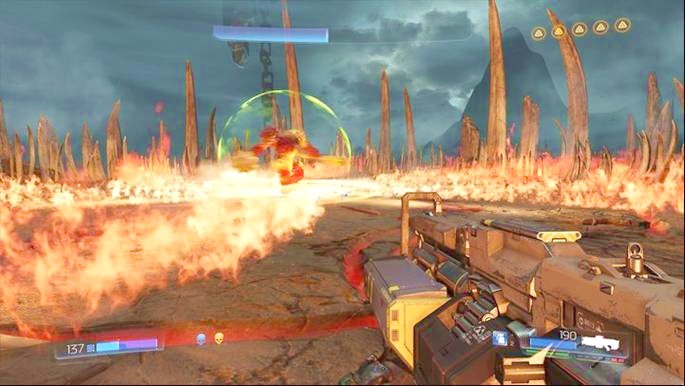 Once very while the beast will activate its shield and then it will start turning around and creating flames. In order to avoid them you must run in same direction as the beast turns into. The direction can change, so be careful. Be prepared to shoot the beast when the shields are gone.

After performing Glory Kill on the boss, two similar ones will appear. Luckily, they have common health and are much weaker. One of these beasts attacks you most of all from distance. It can summon an energy ball but it shoots only one such bullet. Similarly as in previous battle, by destroying the ball you will stun the enemy. The second beast can be also stunned - simply deal some damage to it when it starts turning around. Gauss Cannon is most effective in this case.

Another new attack is a fast charge forward with weapon pulled out. You can easily avoid this attack since it is also performed in straight line. You shouldn't have trouble with fire breath as well - it has very short reach.

The most dangerous is the tag attack of the demons. The beast that attacks from distance will raise the other demon in the air and, once it gathers enough energy, will hit it down and create a deadly shockwave. In order to avoid it you must quickly start shooting the ranged demon. Once it receives enough damage, both enemies will be stunned. It is a good time to deal massive damage to them. You can also stun the opponents with BFG. Once the battle ends, you can pick up Crucible and end the level.