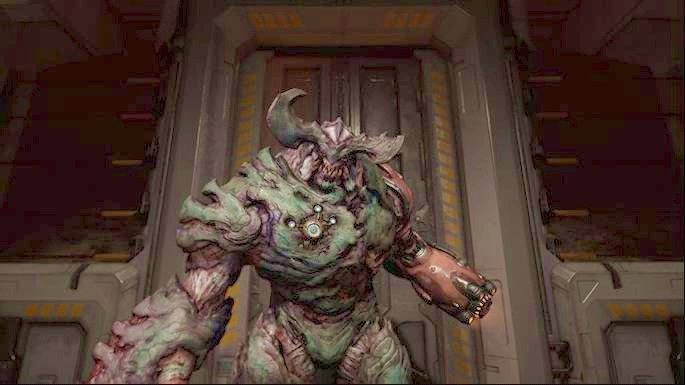 In order to defeat this powerful demon you must most of all learn all his attacks and how to avoid them. There won't be any medipacks scattered through the map nor enemies which can be used for healing.

When enemy starts shooting rockets, you must dodge by strafing to the sides. You can avoid half the bullets by running in one direction and other half by running in other direction. 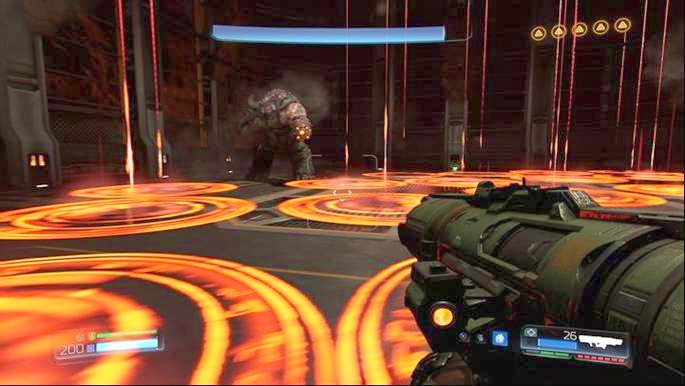 After the demon shoots many rockets above, yellow circles will appear on the ground. They mark the places where the rockets will land. Quickly find a safe field and shoot the demon from there.

Once every while the demon will release an orange shockwave over which you must jump. Use double jump to be sure that you avoid it.

Every once in a while the enemy will try charging on you similarly to like Pinkies are charging. If you keep enough distance then you shouldn't have any trouble with avoiding the attack.

Keep as long distance during the battle as possible unless you must pick up the ammunition dropping from the enemy. Walking towards the demon is very dangerous since his fist attacks are almost impossible to avoid.

Once the opponent loses half of its health he will try performing powerful energy attacks. First he will create homing lasers and them he will release a deadly beam. In order to avoid it you must quickly run to the side and immediately change direction when the lasers change color.

If you use BFG on Cyberdemon you will stun him for a very short time. During that time you can deal more damage to him. However, you shouldn't do it during the first phase of the battle. Once you take away the whole health bar of the creature, the second phase of the battle in hell will start. The second phase is much harder and the BFG will be much more useful at that point.

The second phase is quite similar to the first one, but it differs in a few important details. This time the demon will release not one, but three shockwaves. The first one will be flying low, the second high and the third one low again. In order to avoid them, first you must jump over the first wave with a single jump, then quickly press the crouching button to land immediately and avoid the second attack, and finally perform a double jump to avoid the third wave. 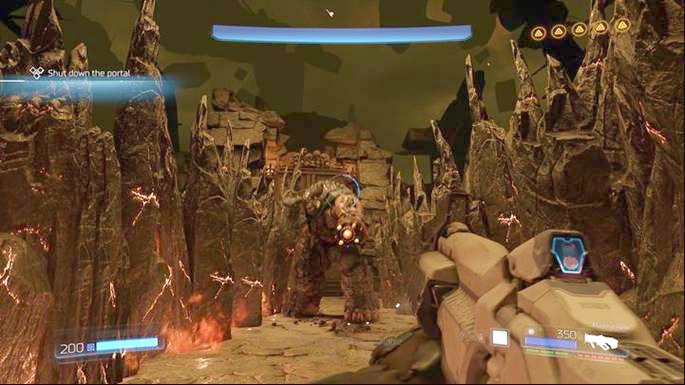 The second difference is that from time to time the beast creates two stone walls that limit your movement and then it shoots rockets or shockwaves. In the latter case they walls won't be troublesome, but the rockets are much harder to avoid in the narrow passage. Just as in the first phase, you must run to the sides, but this time the direction must be changed much more frequently.

The most dangerous part is when the creature shoots rockets to the sky. The attack works similarly as before, but this time in addition to looking for safe position you must also jump over shockwaves that will appear after a moment.

The best way to quickly end the encounter is to use all the saved BFG ammunition. You should use it whenever the opponent is using an attack you have trouble avoiding. By stunning him you will cancel the attack and be able to pay him back.

Once the battle is over, walk towards the red portal and end the level.