Below you will find a detailed description of all secrets available on Kadingir Sanctum level. Among them there will be Automap, Data Logs, Rune Trials, Collectibles and Argent Cell. 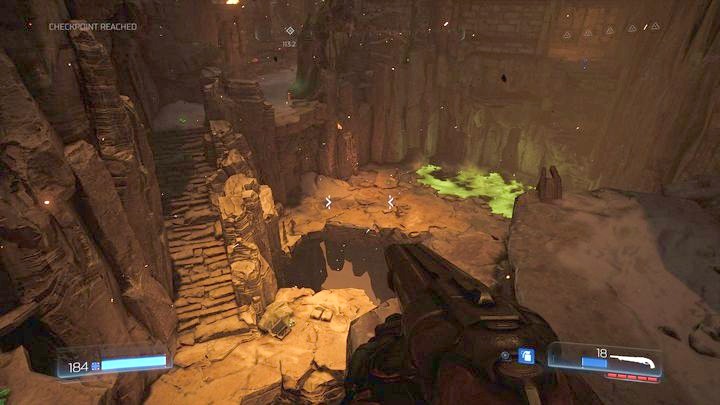 The first turn is almost at the beginning of the level. When you notice a green pond below, turn left. High on the mountains there will be the armor. 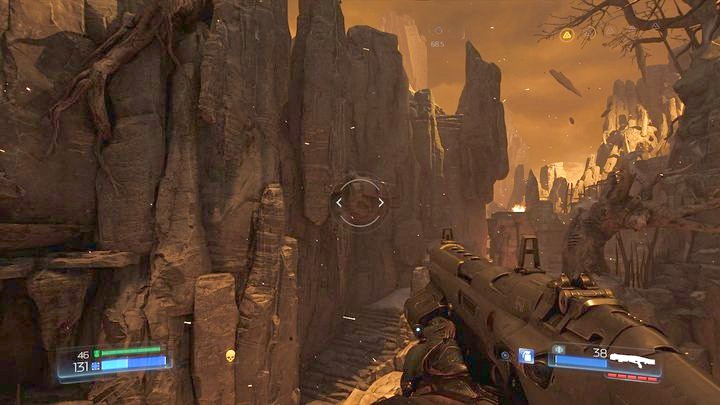 In order to get to it you must jump on the path below and then observe the left wall. There will be rock ledges there through which you must jump up and unlock the secret. 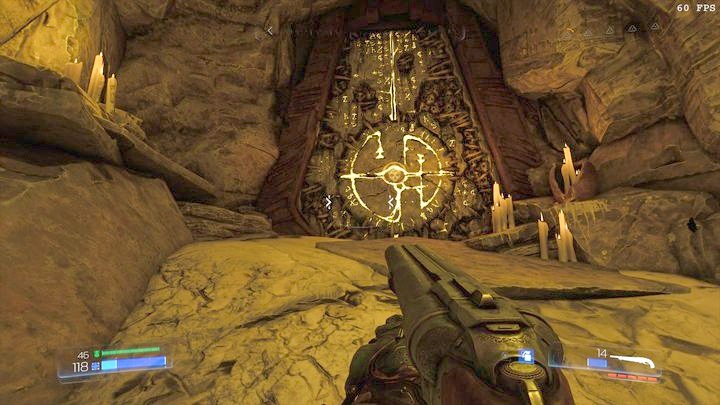 The first log is a crystal that glows in green. It is behind the yellow door which requires yellow skull to be opened. 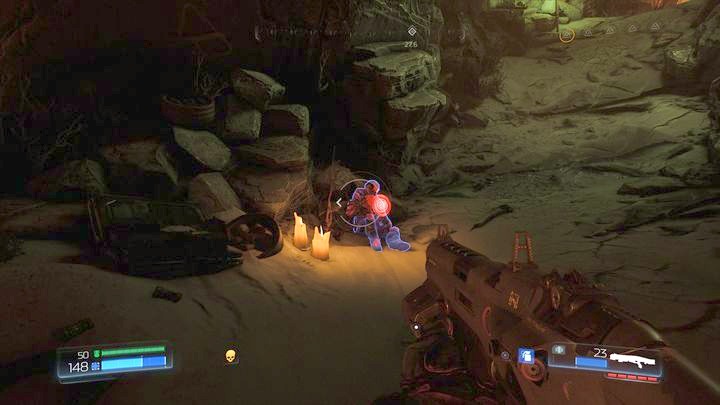 You will find the guard behind the door opened with a yellow skull. 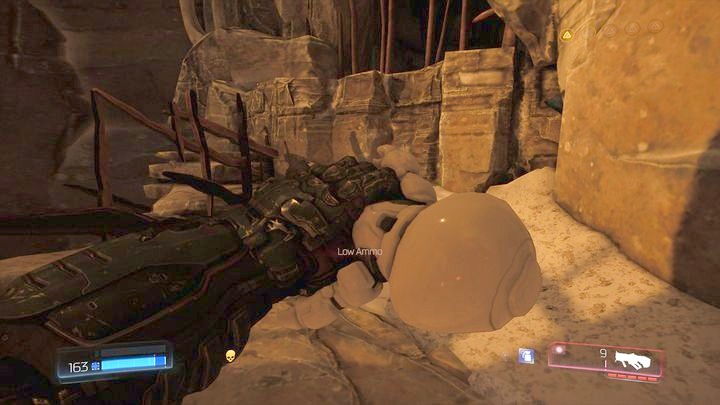 Once you reach the first green teleport, turn right instead of entering inside. At the end of the short path you will find the first collectible. 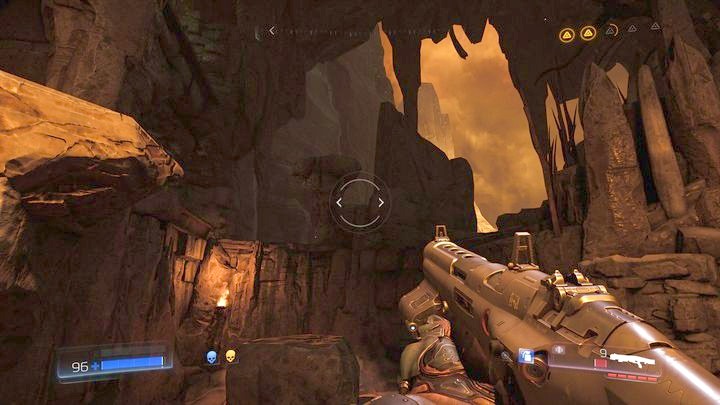 Stand on the rock with attached chains after you use the first teleport and kill all enemies. On the opposite side to the yellow door you should notice a piece of rock floating in the air. 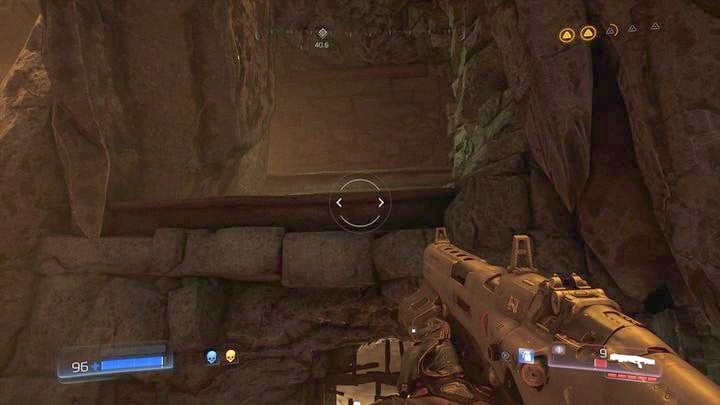 Jump on it and from there to the ledge on the left. Climb to the very top and you will reach the first challenge. Important! If you try entering there without using the teleport, then the road will be blocked.

This challenge is rather unordinary. You must reach the altar on the opposite side of the location. The trouble use, you can move only for few seconds after killing each Imp. Luckily, the beasts are constantly appearing in front of you, making it easy to hit them with a shotgun. During the challenge you must constantly jump from one creature to another and you should them from close. This will allow killing them with a single shot, which is important since the Super Shotgun has slow reload time. You should change ammunition only while running to the next demon. For completing the trial you will receive the Savage rune which allows performing the Glory Kills faster. 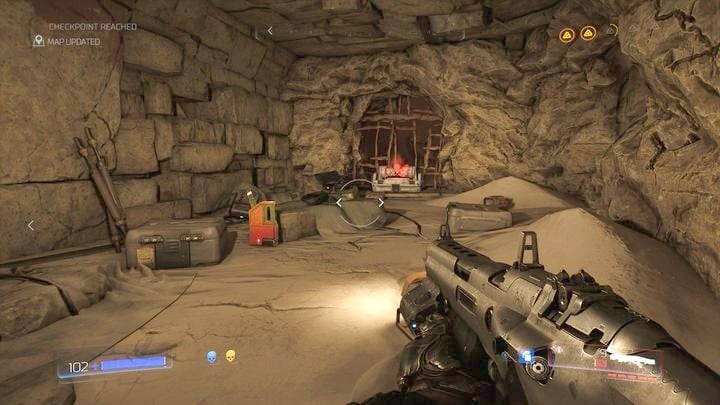 After walking through the door that requires the blue skull you must turn right. In the long niche you will find the valuable cell. 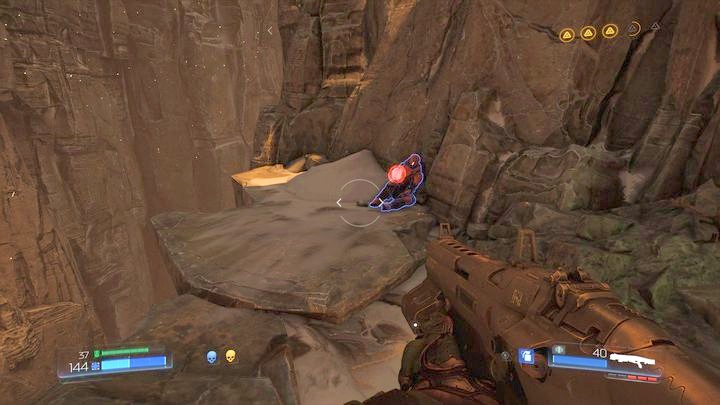 Go back to the tunnel exit where you were attacked by Cacodemon before you walk through the large black gate. Search the area thoroughly. You will find an Elite Guard. 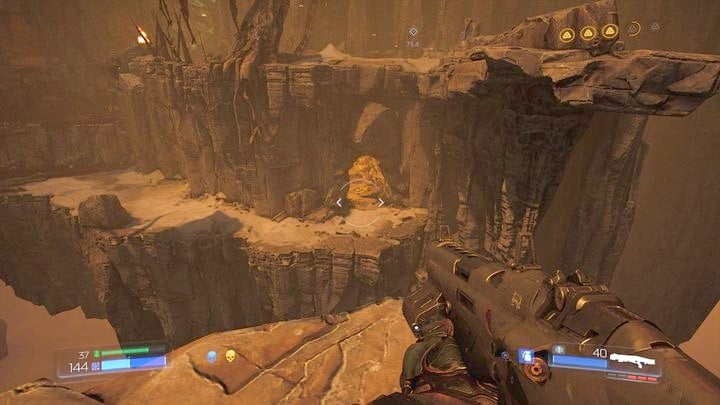 Turn around and look down after finding the fourth Elite Guard. You should notice a cave entrance. 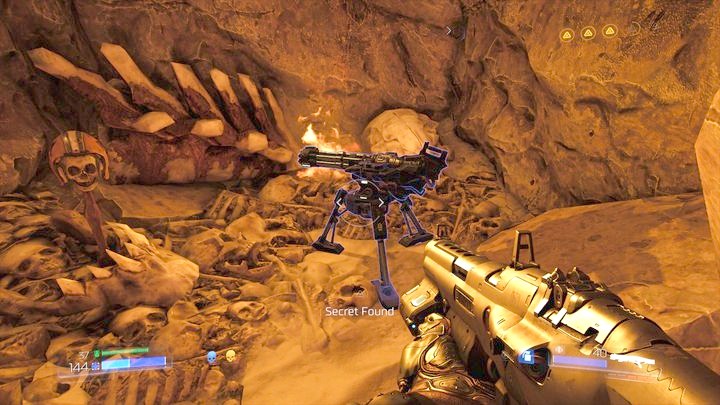 A new weapon is hidden inside - a machine gun. By walking towards it you will receive a secret. 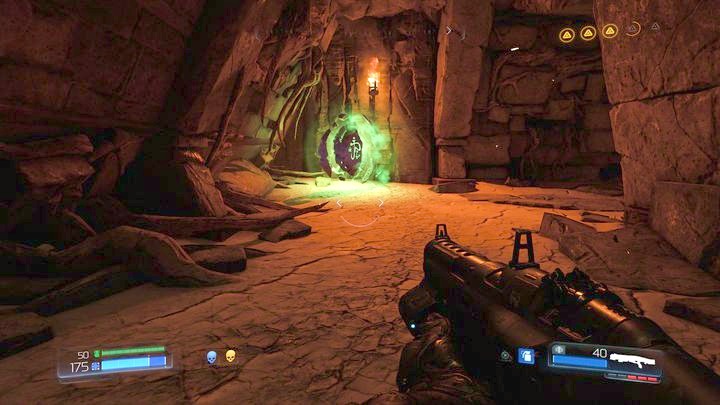 After examining the automap you must go to the opposite end of the map. Further path leads up, but first examine the tunnel on the left. There you will find a Rune Trial - Seek and destroy. Your task will be to perform three "Death from above" Glory Kills on the Hell Knights. The enemies will appear one after another, so the encounter shouldn't be too hard. Your basic weapon will be a heavy assault gun. It is a good idea to use its upgrade with exploding bullets so that you can quickly weaken the enemy. In order to perform an aerial Glory Kill you can stun the enemy under the stairs and then jump on him from above or do the same with a double jump. During the battle you must remember about collecting ammunition between the new Hell Knights appearing and about killing the weaker enemies in order to heal. 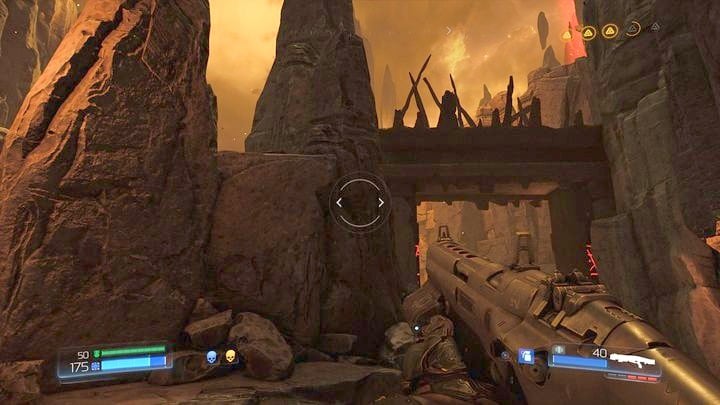 Start climbing upstairs after completing the second Rune Trial. Halfway you can turn around and look left. 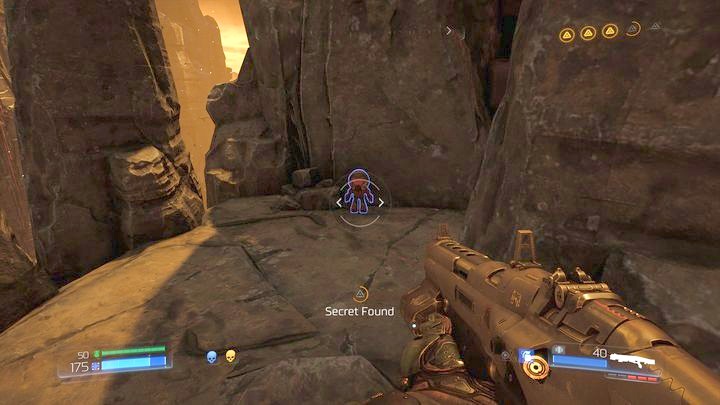 There will be a rock ledge there on which a collectible is hidden (RedGuy). 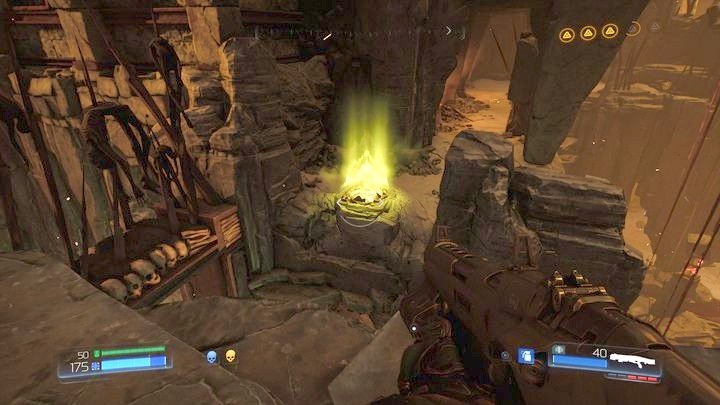 Once you collect the second collectible, go to the top of the stairs and then to the right. When you walk towards the edge of the rock you should see a yellow gravity jump below. Land next to it and then go ahead. 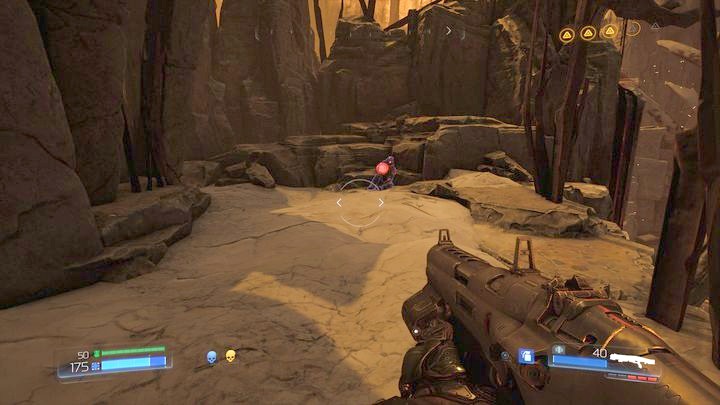 On the right side you will find an Elite Guard and on the left two Data Logs (one in the form of a runic stone). 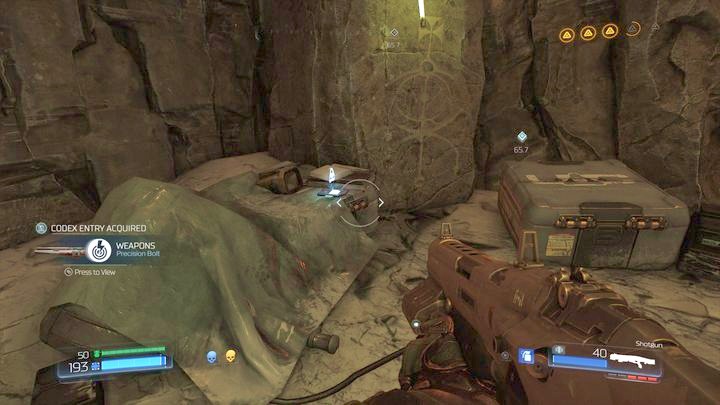 Now you can go back to the jump and use it to get back up. Now you should go to the left from the stairs. On the way you will pass next to one Data Log and a Combat Support Drone. 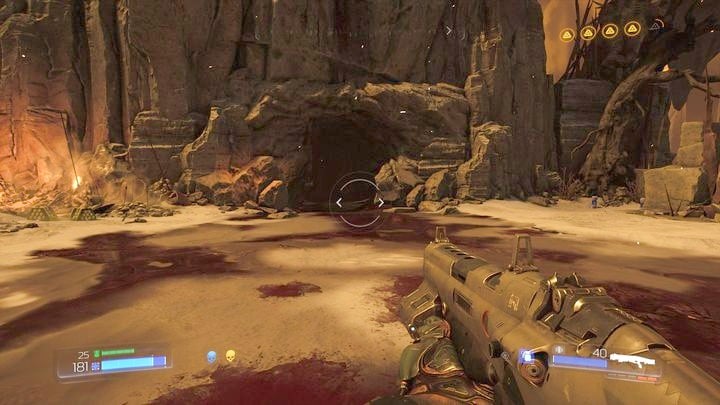 Once the battle with the first Baron of Hell ends, a gate near the Quad Damage power-up will unlock. Before you walk through it, go to the cave in front of it. 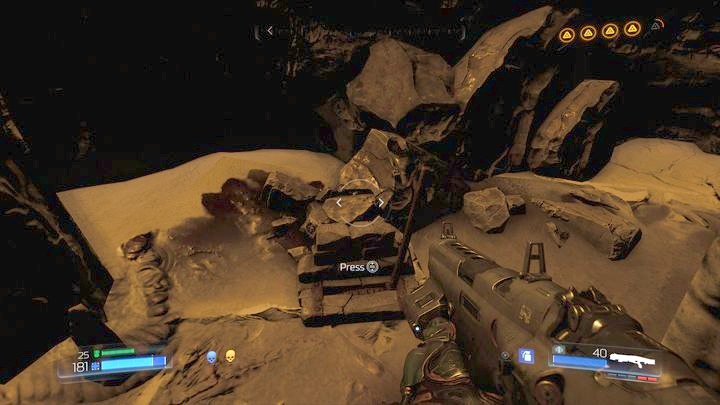 There is a hidden lever there that opens the Classic Map. 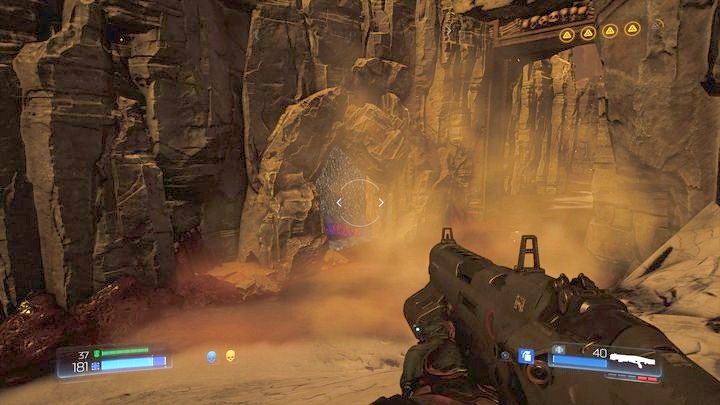 Entrance to the map can be found by jumping to the right from the bridge that leads to the large gate. It is precisely under the bridge. 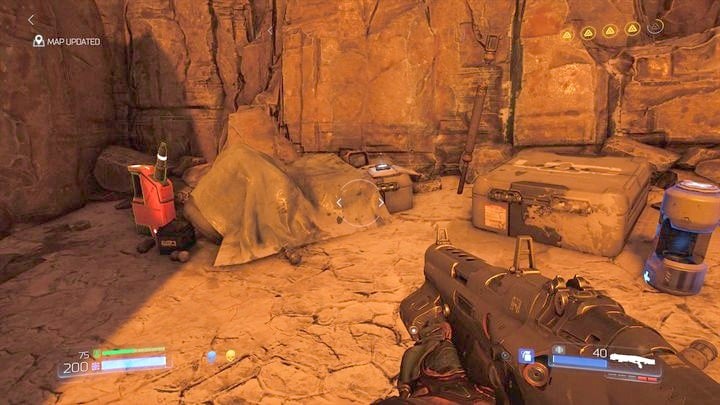 Keep going ahead after you defeat the first Baron of Hell and walk through the large gate. After jumping from the last island floating in the air you can pick up the Data Log. Then go forward up. 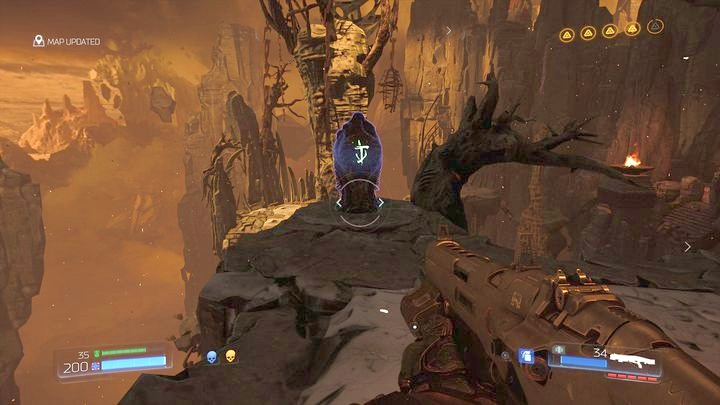 During the climb you will encounter one more Data Log in the form of a runic stone. Slightly further there will be an Elite Guard. 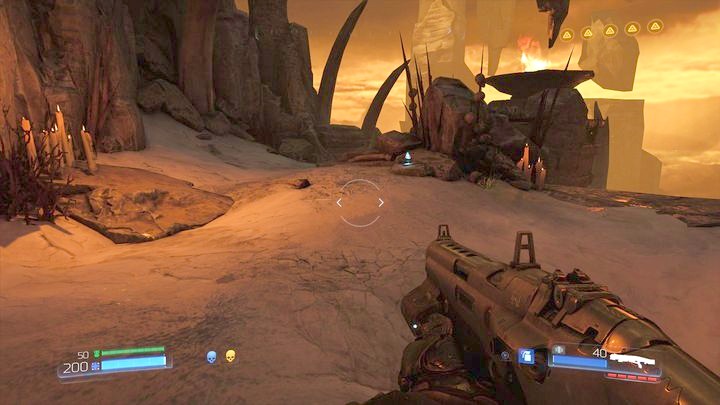 The last Data Log can be found before the final battle of this level. You should also pick up the armor and ammunition in the tunnel before the fight starts.