Detroit Become Human Guide is mainly a walkthrough of the game's story. The game's plot is divided into three main threads of independent characters who strive to achieve their own goals, and also to reach the grand finale that relates to the whole presented world. We have prepared a section about important choices that will show you chapters and moments in the game when you make the most important decisions that have a serious impact on the end of the game. You won't find many additional secrets in the game, but for the insightful there are many tips and clues on how to find them in each chapter. They are presented in special Flowcharts, which are attached to each chapter of the walkthrough. The guide concludes with a list of trophies.

Playing Detroit Become Human game mainly consists in making decisions. It is a game with a very complex plot that contains dozens of possible solutions. The main theme is divided into three parts between the lead characters and tells the story of androids striving for liberation in the world of people who use them as servants. It's up to you to decide the fate of the characters and the shape of the world at the end of the game.

Using Red and Green color we have marked the guidelines and decisions. This also applies to dialogues and the impact on relations between characters.

Flowchart - This is a map of progress in Detroit: Become Human. You can view it in the game menu during the game or in the main menu with a breakdown structure of unlocked chapters. The diagrams show possible solutions in the chapters depending on the actions and choices of the characters. By default, they are covered. Only after you have completed the action or observed certain things, they will be added and unlocked in the chart. Repeating chapters from the main menu, even after they have been completed and new solutions have been discovered, does not result in an increase in the percentage of chapter completion, and these solutions are not permanently saved in the Flowchart.

Deviant - This is what the rebellious androids in Detroit: Become Human are called. The term is used continuously in dialogues and in the guide.

E-magazines - objects in the world. On the one hand, they are placed in the Flowchart, so they count towards the progress of the game. On the other hand, they are secrets and are responsible for the background story of the game. You can view all the collected magazines later in the main menu in the "Extras" tab.

QTE - quick time events, these are places in the game in which you have to press specific button sequences to perform an action. Due to the complexity of the storyline, sometimes incorrect implementation of QTE can bring quite unexpected results. Check the Flowchart regularly to find out which side paths you can take.

Palace of the mind - we are talking about the hint mode, which we get by pressing R2 trigger. In Palace of the mind mode, you can see all the clues and objects to be analyzed (especially those difficult to see). This mode also indicates the mission's goals and time to complete them (if any).

Detroit: Become Human is an adventure game in a form of an interactive film. At the end of each scene, you'll switch to the next of the three characters, moving on to the parallel line of events in the game world. Although the game is simple, below you will find some useful tips that will explain some of the key in-game mechanics.

In Detroit: Become Human there are two levels of difficulty: carefree (easy) and experienced (difficult). You can change them at any time during the game from the settings, but outside the activities (QTE). Personally, I recommend playing in difficult mode, because the simplified level blocks some of the storylines that lead to negative endings (some events simply will not occur and some actions will always succeed).

In addition, while playing on the easy level you usually have more time to press the keys in QTE - which are also easier to do (it mainly boils down to the pad buttons, without using a gyroscope or knobs), more accurately are indications in scan mode (R2), and when analyzing objects or people, yellow lines will show you the exact places you need to analyze.

In Detroit Become Human, the player takes control of three characters. Each of them is an android, but each has a different character, role, profession, and unique storyline. Below we present the characteristics of all three protagonists whose stories intersect many times.

Connor is a police android, his model number is RK800, an advanced model created for difficult investigative and criminal work, which can be compared to the tasks of the main character of Blade Runner. Lieutenant Hank Anderson is Connor's partner. Connor is pursuing androids that have become defects (known as deviants). In other words, those that have rebelled against the rules and principles adopted in the universe of Detroit: Become Human. Connor seems to be the least human of all the characters in the game - he seems to be a servant dedicated to human law.

Connor has the ability to scan the environment like a detective mode, helping you in unlocking new stage completion variants or dialogues. Connor's advanced processor allows it to simulate and predict possible solutions to a given problem.

Kara is a recently built android. This model is used for home help and housekeeping. However, Kara is not a blind and passive robot - it has developed an awareness of its existence.

Kara is android labeled with number AX400. In accordance with the known tech demo (KARA), the machine is sent to the store. It passes from hand to hand and is finally purchased by Todd Williams, a taxi driver. Todd "rents" Kara as a housekeeper, to take care of the house and his little daughter Alice. One day, however, Kara sees the father bullying his daughter. The intervention ends tragically for Kara - she gets destroyed and ends up in repair, where her memory is being reset.

After two weeks, Kara returns to Todd's home, where the player sees another scene of violence and can intervene against Alice's father. Valorie Curry plays the role of Kara.

Marcus, just like Kara, is a social worker and the third hero of Detroit: Become Human. The model number of this android is RK200, but Marcus is distinguished above all by his self-developed awareness of existence.

Marcus is a prototype developed by CyberLife. Elijah Kamski, the creator of androids, gave it to his friend, Carl Manfred, a well-known painter. Marcus takes care of Carl in his everyday life, but also accompanies him in his worries and sorrows. The relationship between Marcus and Carl develops throughout history until it resembles a family relationship. Soon Marcus's consciousness is so developed that it gives rise to the idea of liberating androids - in a peaceful or violent way. Marcus is played by Jesse Williams.

Connor is one of the main characters. Here you play the role of an android-detective. In general, Connor has the highest amount of various storylines for ending of each chapter.

Marcus is a stormy figure. He is a key character who will decide about the fate of the world and it's ending - positive, negative or neutral. He may die before his storyline ends.

Kara is a secondary and supporting character. Her storyline is strongly detached from the main plot of the game and her decision have a small impact on other characters and final state of the world.

PS4 controls for Detroit Become Human is rather easy. The only difficulty lies in the quick using of controls during the QTE scenes. 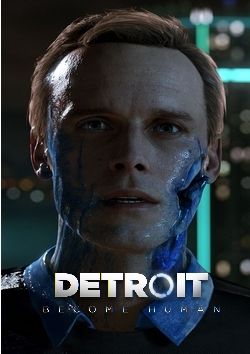 Detroit Become Human for PS4 is another adventure game developed by French studio Quantic Dream, the creators of Fahrenheit, Heavy Rain and Beyond Two Souls. This time the developers decided to expand the idea of the female android Kara, who debuted in a 2012 technological demo.

The story is the mainstay of Detroit Become Human for PS4. Because of that, and in order to avoid even minor spoilers, the plot breakdown wont be detailed. The game takes place in the future, in the titular city of Detroit. In the games universe, robots that look and act like humans have become a part of reality. However, Kara is special, as she has feelings and a consciousness. This makes her want to find out the truth about herself, other robots and maybe even change their fate. Other playable characters accompany Kara, including Connor, who works in police. Their adventures are meant to answer question the why some robots had gone mad and stopped acting like other machines, instead committing crimes and even becoming suicidal.

Detroit Become Human for PS4 is similar to Heavy Rain. It is an interactive story in which the player mostly explores the environment. Since the protagonists are androids, the players will have plenty of new possibilities. For example, when playing as Connor, it is possible to quickly analyze various data, like a weapon left by a bandit. The robot can also reconstruct some events based on clues  this is similar to the mechanic used in Batman Arkham Origins.

Games of December 2019  The Most Interesting Releases

Before 2019 ends, we still have a few premieres  the final episode of Life is Strange 2, the PC port of Detroit: Become Human, a spin-off to Darksiders, and a collection of Halo games.

Video Games' Stories Suck and it's Our Fault

Many of the best stories in video games would be considered average at best if they were the plots of movies or TV series. How can we love Indiana Jones' calques and corny fantasy tropes so much?

This site is not associated with and/or endorsed by the Sony Interactive Entertainment or Quantic Dream. All logos and images are copyrighted by their respective owners.