Our game guide to Destroy all Humans is a comprehensive collection of the most important features and information about the game. In this guidebook you can find beginner's guide, tips and general overview of game features. Also, we have added information about controls, system requirements and game length.

By reading our guide you will easily earn the platinum trophy. We have prepared pages on which we accurately described all the achievements that can be unlocked in the game. This will help you find out what requirements have to be met in order to unlock particular achievements. Also, we indicate when the best opportunities may occur to earn some of the trophies.

If it's not enough for you to collect 100% of all available achievements, then you may find many interesting pieces of information in our FAQ. It contains answers to many important questions. You'll learn from it, for example, how the 2020 game version differs from the original and how to heal up your character.

In our guide you can also find sections in which we have described all story missions of the main campaign. For example, we provide various tips on how you can satisfy the residents of the city.

We have also described the skills of the hero and all abilities of his ship. In addition, you can find detailed descriptions of in-game weapons and their enhancements. This way you will be able to learn how to develop them in order to make the game more enjoyable. If you need any information on the bosses then we have prepared them too!

Destroy All Humans! doesn't have a difficult to get platinum trophy, but it is time-consuming. This is not a short game. Some achievements require precision and knowledge that can only be obtained by playing the game. Some trophies are easy to miss.

You can find our trophy guide here.

System requirements of Destroy All Humans 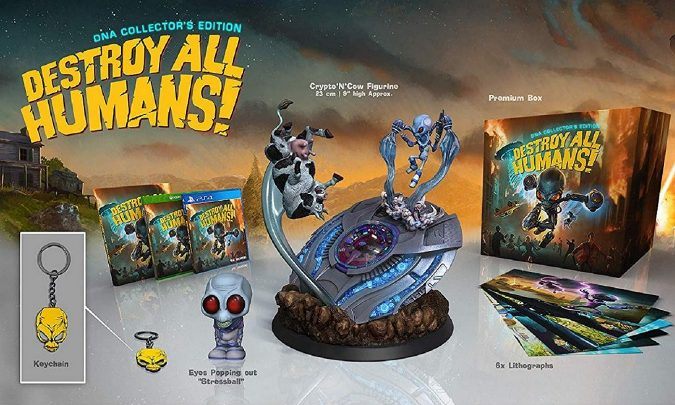 Destroy All Humans is available in three editions:

Standard - in this case you only get a box with the game.

DNA Collector's Edition - including a 23 cm Crypto figurine with a cow and a key ring;

More about special editions can be found in a separate section of our guide.

The main storyline of Destroy All Humans provides gameplay for several hours, that is, around 5 - 6 hours.

You can find out more about the length of the game in a separate section of our guide.

About Destroy All Humans Remake Guide 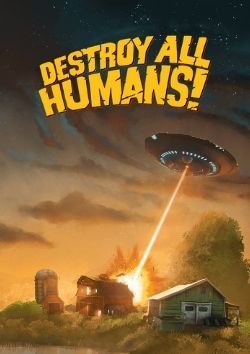 Destroy All Humans! is a humorous action adventure game in which players assume the role of a dangerous alien. The game is a complete remake of the first installment of the series, which was released in 2005 on Xbox and PlayStation 2. It was created by a team from Black Forest Games (Giana Sisters: Twisted Dreams, Bubsy: The Woolies Strike Back). Originally the Destroy All Humans! series was developed by a non-existent Pandemic studio (Battlezone II: Combat Commander, Dark Reign 2, original Star Wars: Battlefront, The Saboteur) and saw a total of four parts, the last of which was released in 2008. They all revolved around an alien named Crypto who came to Earth in search of lost DNA.