On this page of the Cyberpunk 2077 guide, you will find a detailed walkthrough for the Automatic Love quest.

After the meeting with Takemura, V has to find Evelyn Parker to find out if she can help him. When they last met, Evelyn promised to get rid of Relic.

Reward for the quest: XP. 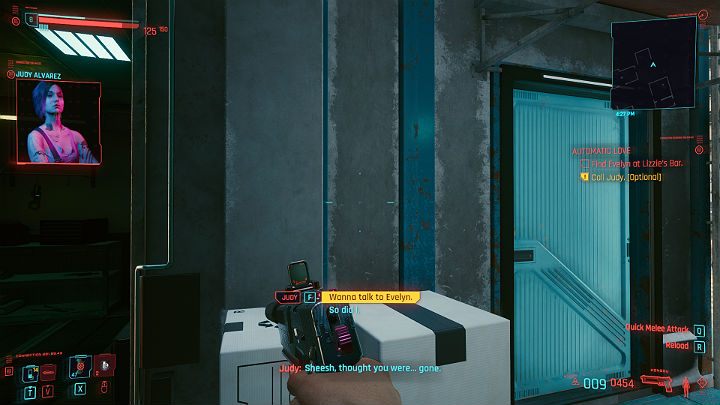 You can start the task with an optional conversation with Judy. When V calls her, Judy will not want to talk to him about her friend. From her tone, you can guess that she is hiding something. 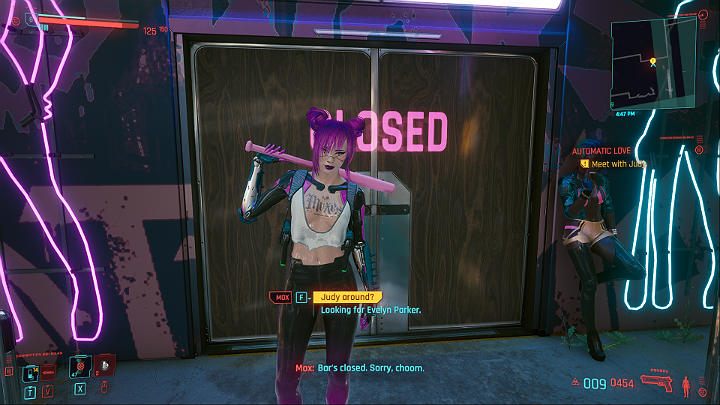 Time to go to Lizzie's Bar. Max will greet you at the door. Tell him that you want to talk to Judy and he will let you in. 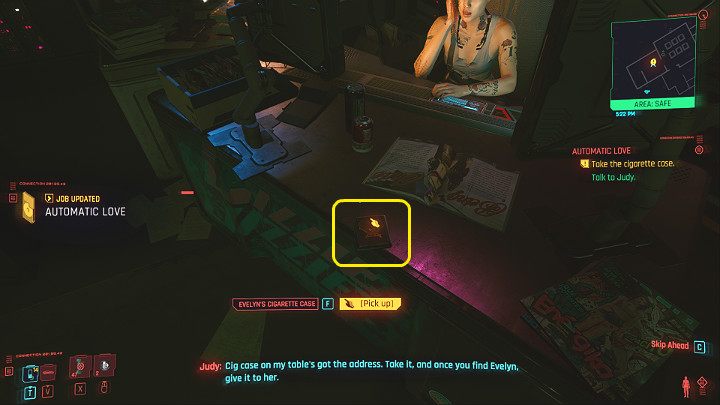 When you go down to Judy's studio, you will hear the editor arguing with Susie Q - apparently, she is one of the workers. Talking to Judy can have many courses, depending on how you developed your character. But it all comes down to the fact that Evelyn is a doll and used to work in the Clouds. On the editor's desk, you will find a cigarette case with an address. As soon as you try to leave the Mox Club, Judy will ask for one more thing - she wants to know how Evelyn is doing. 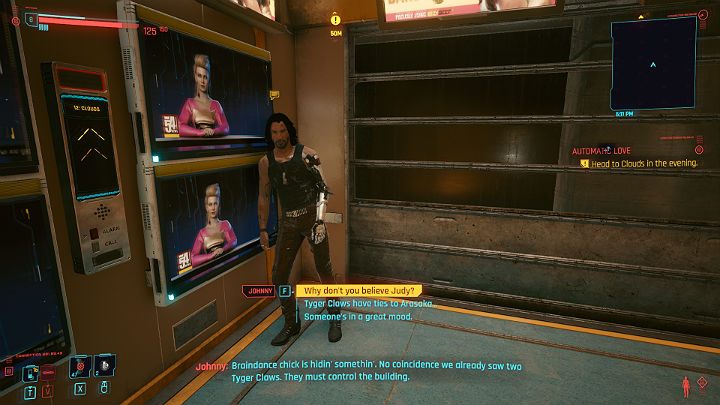 When you get to the right building, enter the elevator and go to the 12th floor. During the ride, Johnny will have a little bit to say so you can talk to him if you want. 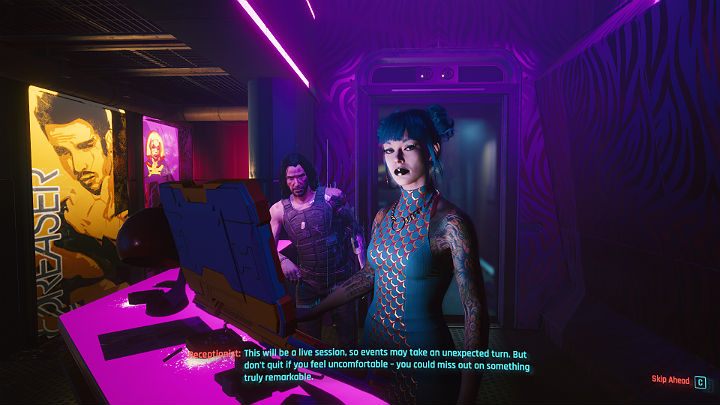 Go straight to the reception desk and connect to the terminal. When you ask about Evelyn Parker, the receptionist will answer that she is not available now, but they will help V choose the right partner. 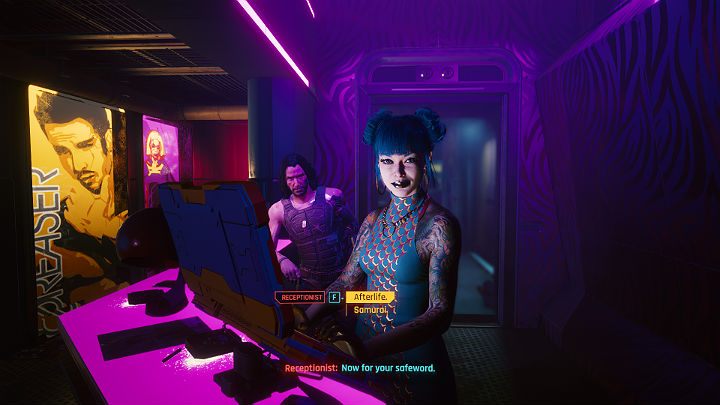 Before choosing the doll, you have to choose a security password that you can use to stop the session at any time. 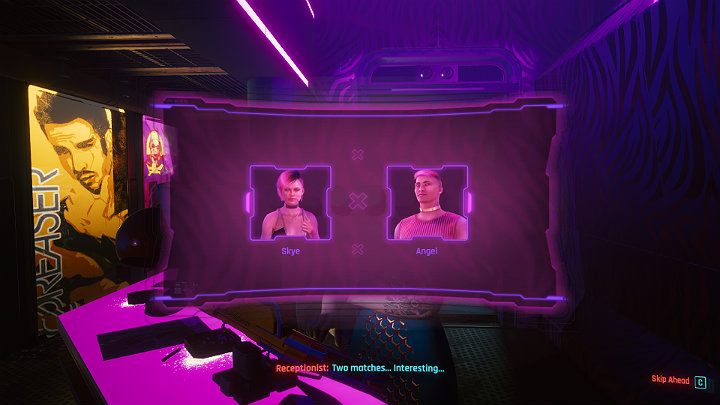 After reading the V's profile, two doll proposals will appear on the screen: Skye and Angel. Your choice will not matter.

Ask the doll about Evelyn 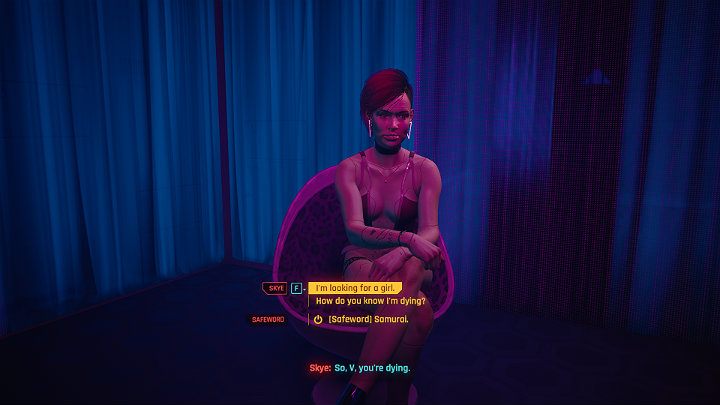 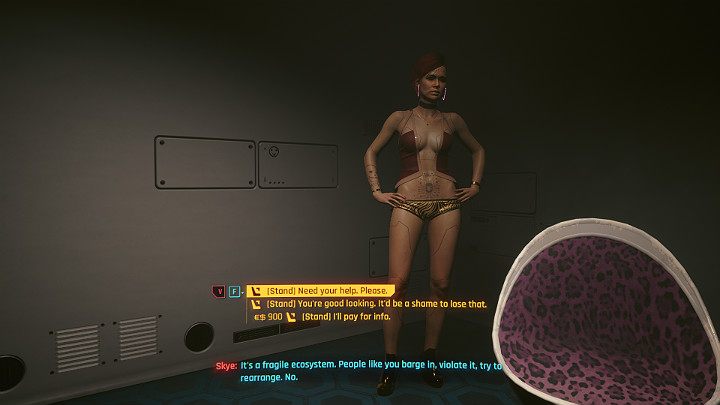 When you ask about Evelyn Parker, the doll will not say anything at first. When she gets up, you can get the information you need in several ways. You don't have to pay, just ask politely, and you'll find out that Evelyn had some things in common with Tom (another doll) and V should ask him about her (VIP area, both no. 2). Besides, one of the clients deceive Evelyn - there was a commotion, they called the security and silenced the case. The incident occurred in her booth - 11.

Get inside Evelyn's booth - optional 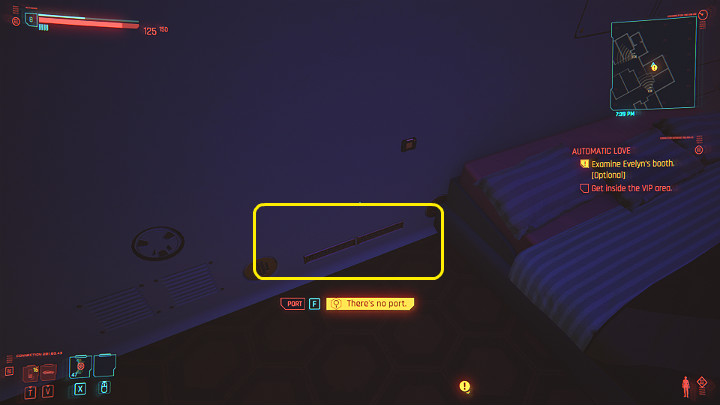 If you want, you can go to booth 11 and check if you find any traces of the incident mentioned by one of the dolls. First of all, look at the traces of blood on the wall. Also look into the gap on the left side of the bed. 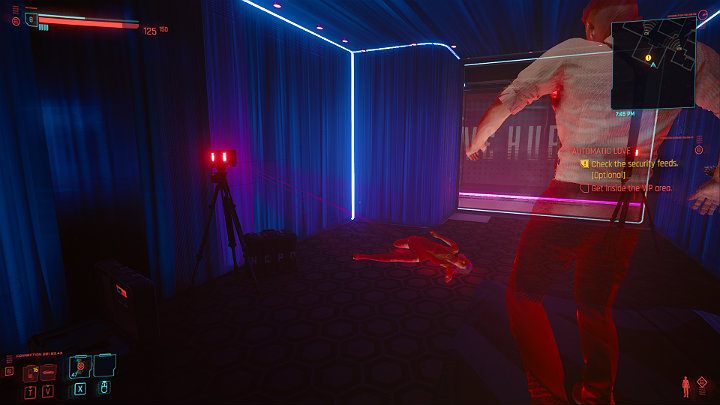 When you turn on the holoprojector, you will see a strange scene from which you can guess that Evelyn Parker suffered some kind of short circuit and behaved strangely. Apparently she became a target of netrunner attack.

Get inside the VIP area

You can force your way to the VIP area, but then you will be considered an enemy and won't be able to complete your visit to the Clouds peacefully. 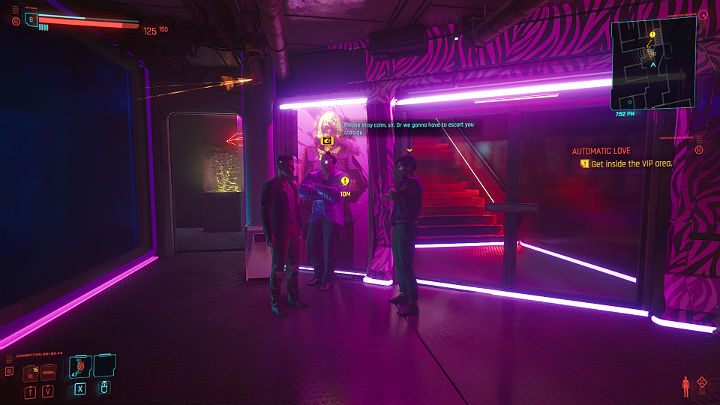 In front of the door to the VIP area, you will see a scene where one of the clients is sent away by two security guards. It will not be easy to get inside, but there is a way. 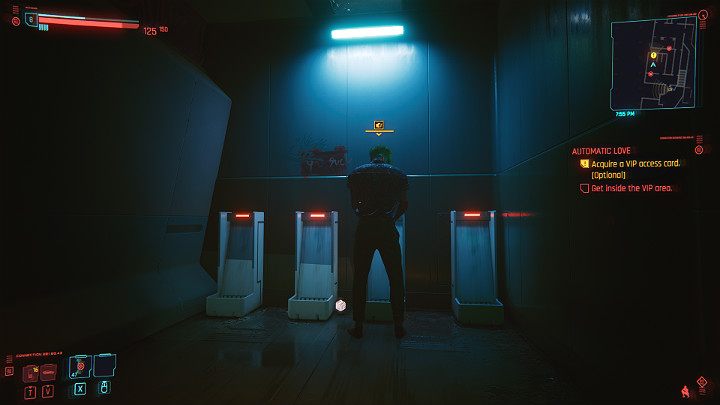 Follow one of the bodyguards to the bathroom and wait until the man starts using the urinal. Go from behind, grab and disarm him (or kill him if you like) and then take his access card. You can hide the body in the container, which you will find on the left side after leaving the toilet. 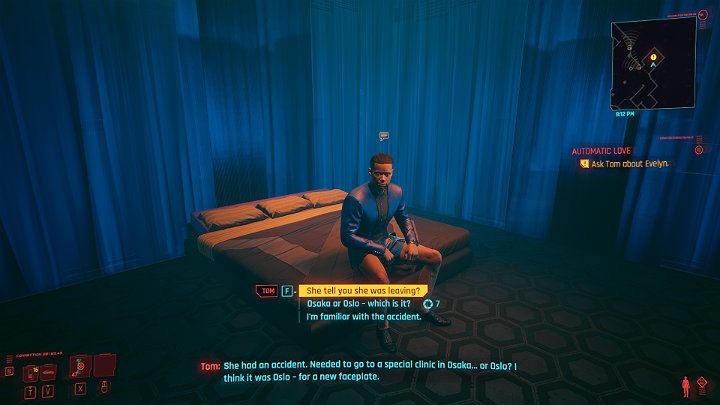 Go to the VIP floor when the security guard walks away and enter the room on the right side of the bar to talk to Tom. When you ask about Evelyn Parker, you will find out that the man also tried to contact her, and unfortunately, it did not work. The woman is said to have left for Oslo - this is what Woodman told him. 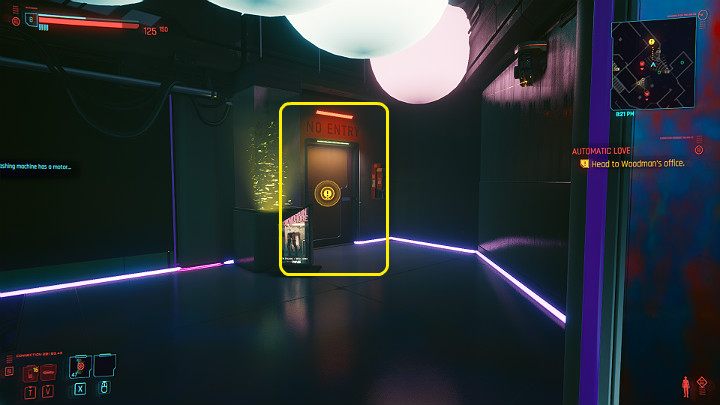 Go to the back room to talk to Woodman. You will find the entrance behind the door with a NO ENTRY sign. Go inside when the camera next to the door is turned the other way and the bodyguard leaves his post. You must know that you are entering hostile territory. 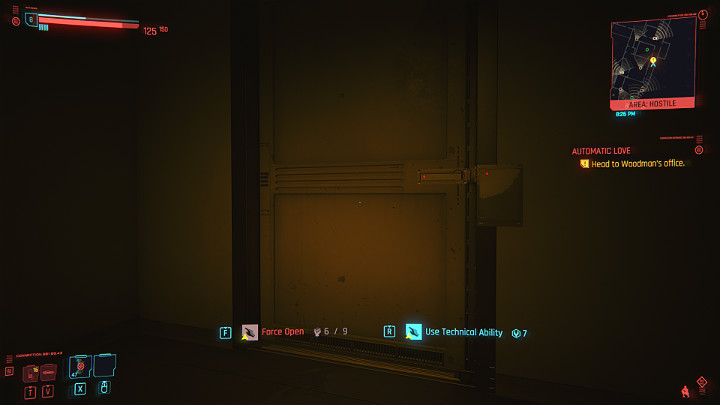 The club owner can be reached without bloodshed. If you have a highly developed Technical Ability attribute (at least 7 points) or an appropriate Body (at least 9 points), you can walk down the corridor and open a closed zone. 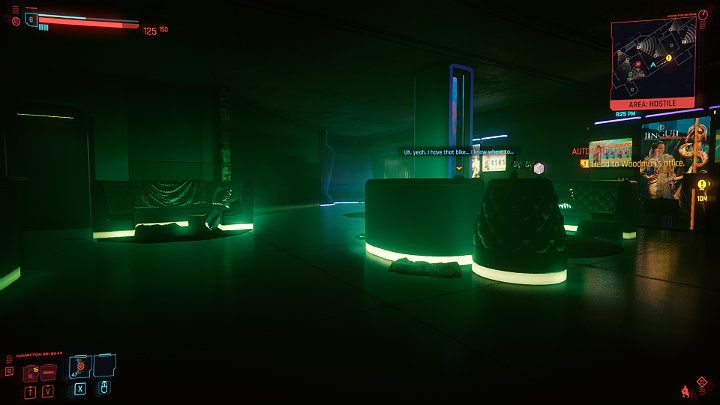 If you cannot open it, don't worry. Enter the room on the left and eliminate one bodyguard quietly or avoid him while he is on the phone. Go through the door on the other side of the room, then go straight and turn into the hallway on the right. Woodman's office will be a little further to the left. 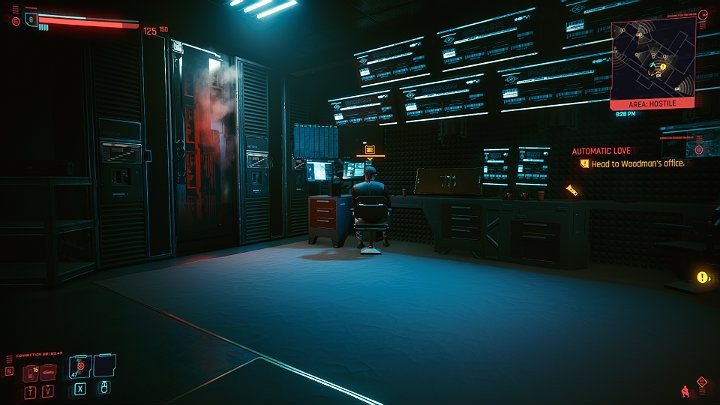 However, before you go to talk to the boss, it's worthwhile to explore a bit. In the room opposite Woodman's office, you will find a control room. There is one bodyguard inside, which can be easily neutralized. 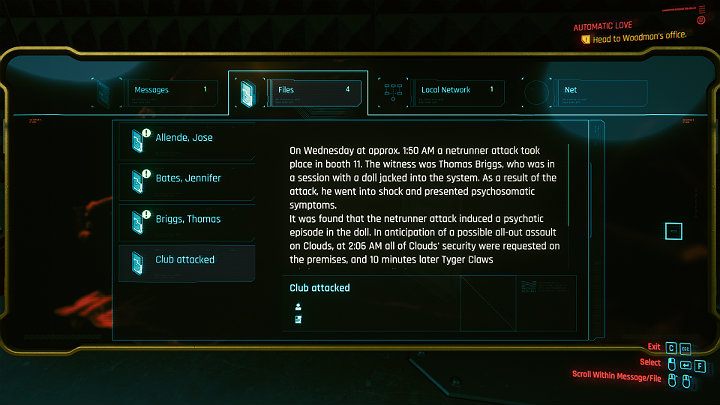 Shard lying in the corner of the room contains info about changes in the schedule. You will also find messages on the computer that can help you in your upcoming conversation with Woodman.

The most important message concerns the attack on the club. You will learn from it that on Wednesday around 1:50 a.m. a netrunner attack took place in booth number 11. This is the private cabin of Evelyn Parker. 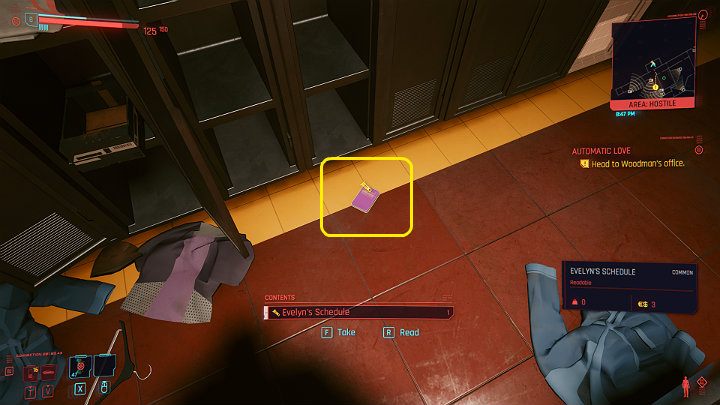 In the room opposite the control room, you will find a locker-room, and in there belongings of Evelyn and weapons. It is worth taking it, just in case. 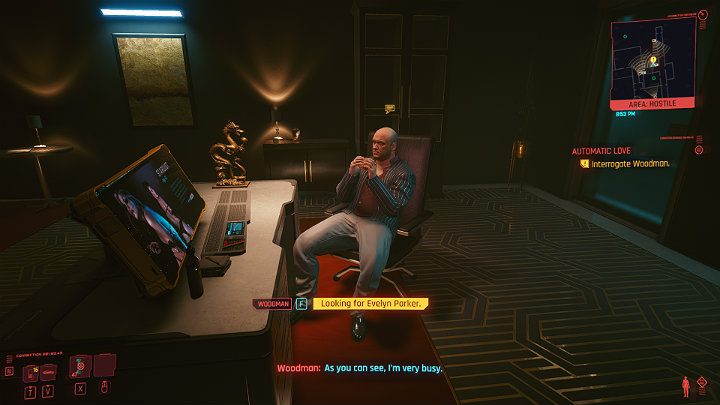 The conversation with Woodman has many scenarios and can end in two ways: peacefully or brutally. If you have set off an alarm in the club, you will not be able to come to an agreement with Woodman.

Make a deal with Woodman 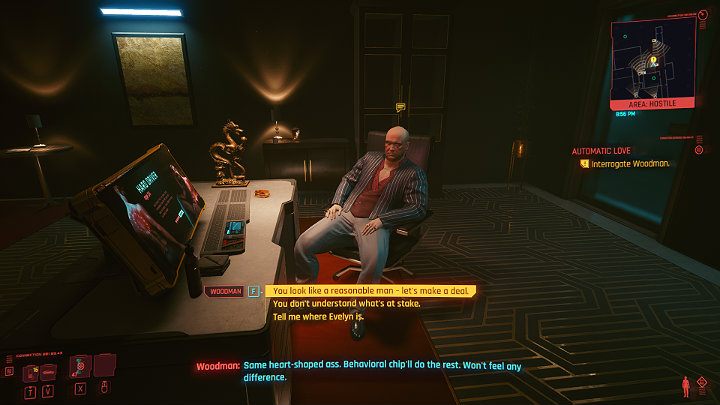 If your character has a high Intelligence attribute, if you have previously examined booth number 11 and/or read the messages from the computer in the control room, you can make an agreement with the club boss. You can choose from many dialog options.

Once you reach an agreement, Woodman will activate the elevator in the hallway to the left of the office exit. If you have used your Technical Abilities, remember to tell Woodman the information you promised, to avoid conflict.

If you talk with Woodman and leave him alive, you may find him later while performing the Ex-Factor quest. 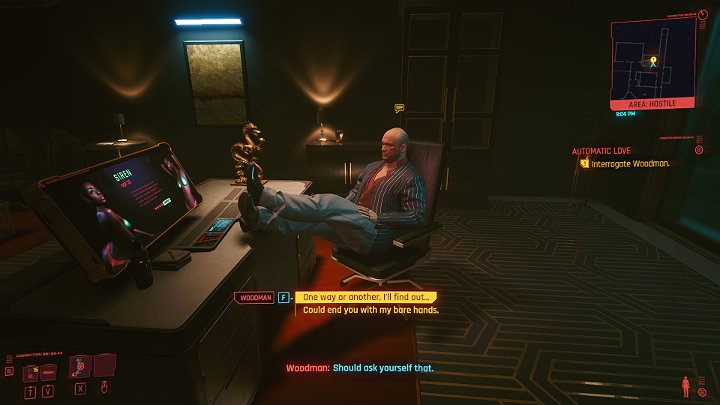 You can intimidate the boss if you've watched the hologram from Evelyn Parker's booth, completed a side job I Fought the Law and/or Monster Hunt, or use non-aggressive dialogue options, such as:

When you intimidate Woodman, you will receive the necessary information and he will activate the elevator, which is located in the hallway to the left of the office exit.

If you talk with Woodman and leave him alive, you may find him later while performing the Ex-Factor quest. 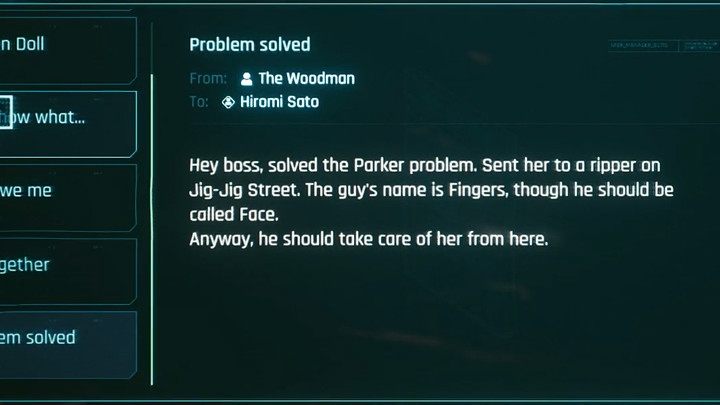 If you have entered the club by force or want to get rid of the boss, you will have to fight Woodman. A man will attack the moment you cross the threshold of his office. When you kill him, search his computer to get the information you need that you couldn't find otherwise.

The result of the interrogation 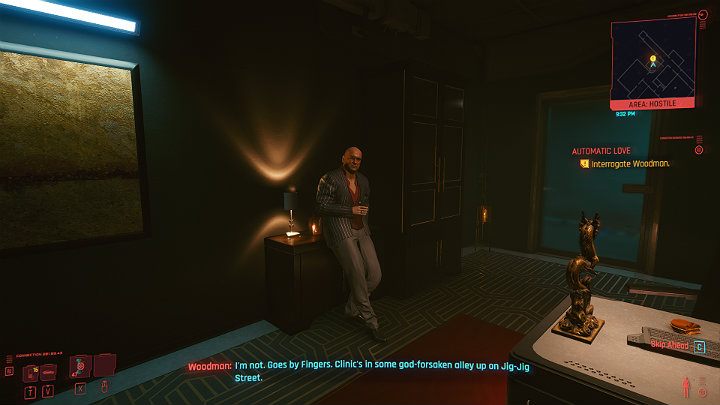 No matter how you end the case with Woodman, you will find out that dolls have one goal - to make a profit. Evelyn stopped making a profit, and Woodman got an order to dispose of her. However, he did not do so and handed her over to the ripper, who was supposed to fix her. They call him Fingers, and his clinic is located near Jig-Jig Street. 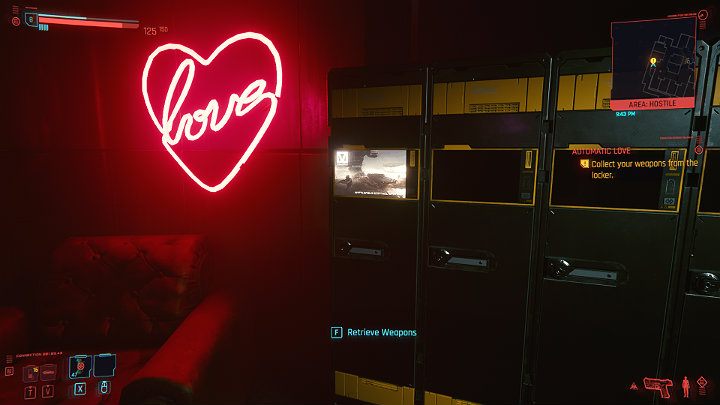 If you have made a deal with Woodman, use his private elevator to get down to the first floor. Before leaving the club, remember to take back your weapon, which you have deposited earlier. 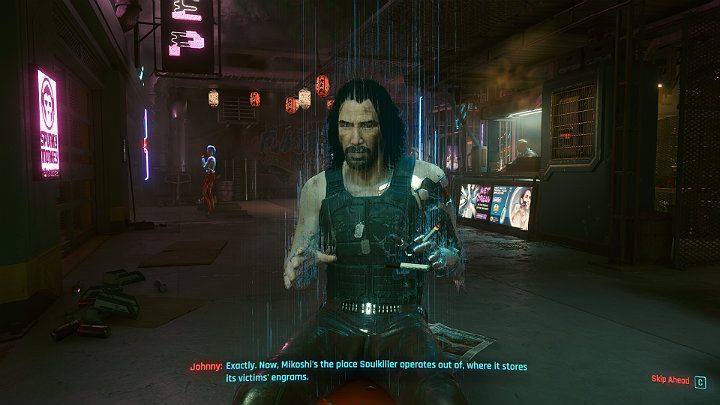 Enter the elevator and go to the first floor. During the ride, there will be another confrontation with Johnny, who will want to persuade V to join in the destruction of Arasaka. Johnny wants to find Mikoshi - the place where engrams are kept.