Hacking is one of the main skills in Cyberpunk 2077. With it, you can open locked doors, manipulate opponents, cars or cameras. 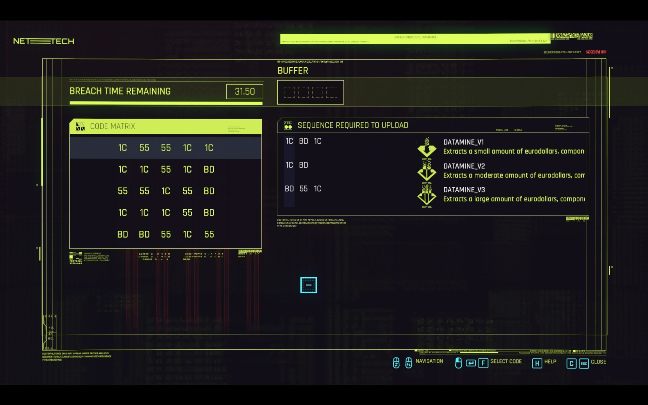 Hacking is presented as a short mini-game. Its duration will depend on the situation and what you want to hack. 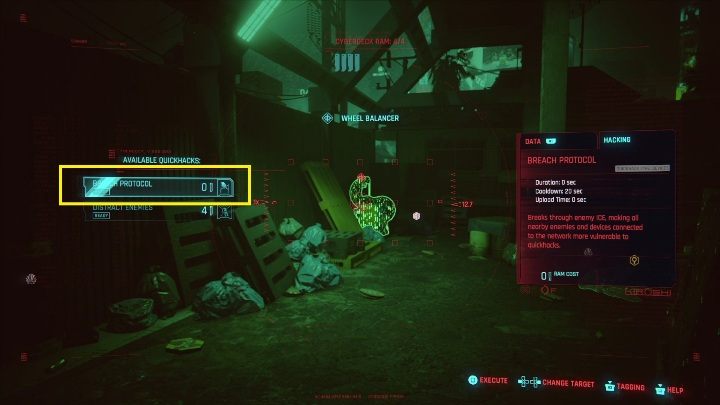 To make it easier for you to familiarize yourself with this system, we described it in a few simple steps. This way, you will find out what to do and will be able to get through all the hacking in your way.

Let's start with a simple explanation of the mechanics. Breach Protocol is a short mini-game, which requires a thorough analysis and clicking the relevant elements. 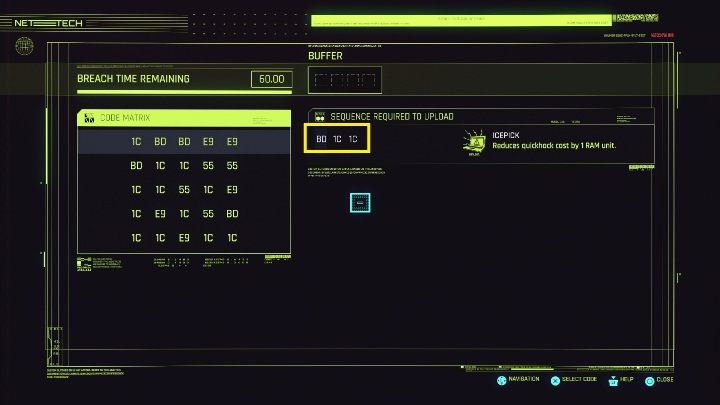 The first thing you need to know is that your task is to reproduce a sequence of the numbers on the right - we have marked them on the screen above.

The sequences correspond to a hacking program - a daemon. 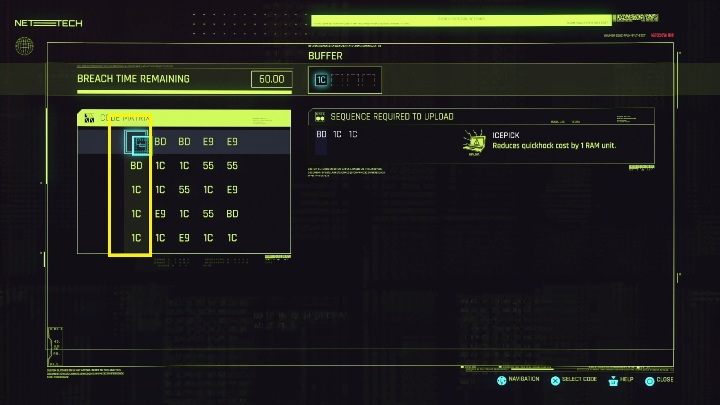 The second thing, this mini-game resembles sudoku. Your next selected number must be in the same row or column. Otherwise you will not be able to activate it.

It is up to you which column you activate. 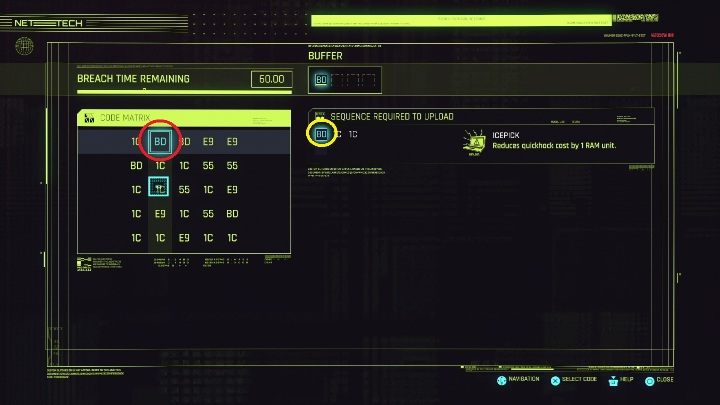 The third thing to remember. The first move is most important. It is up to it which next column will be activated. 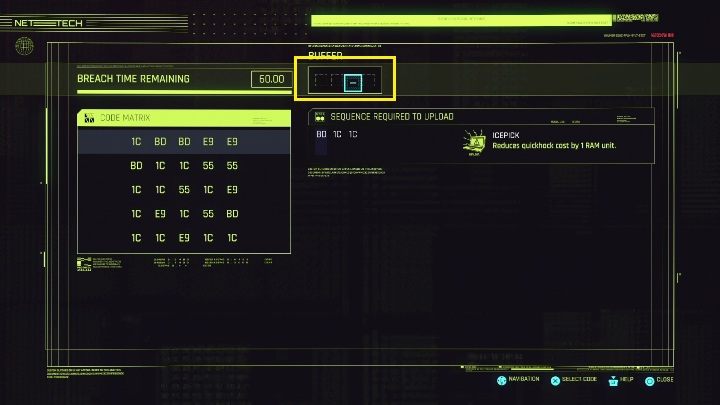 Fourth thing, your buffer is limited. The buffer determines how many moves you can make. If you make too many of them, the mini-game will end, but you will not be able to hack the item.

Buffers are located on the right side, at the top. We marked it on the screen above. 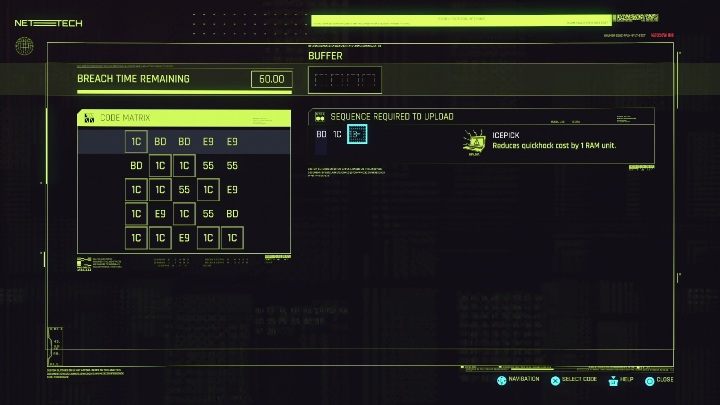 Fifth thing, you can highlight the symbols you are interested in on the matrix. All you have to do is hover the daemons, and they will show up on the matrix. This can make your task easier.

To make sure you 100% understand what this hacker mini-game is all about, we will show you an easy example. 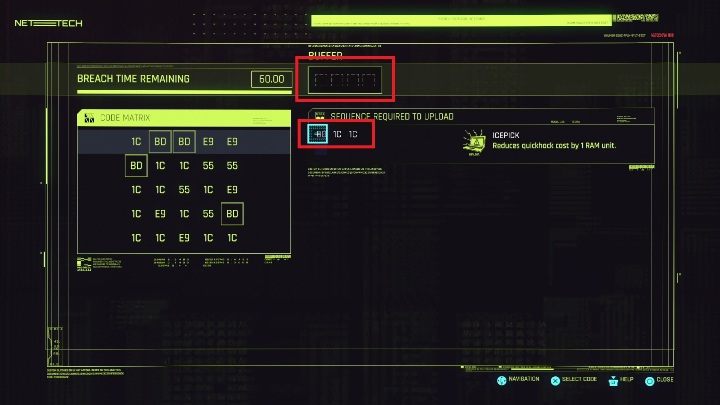 Look right at the daemons that are most important in this situation. These are the elements that you have to mark.

Look up on the buffer. This is the number of chances you have. 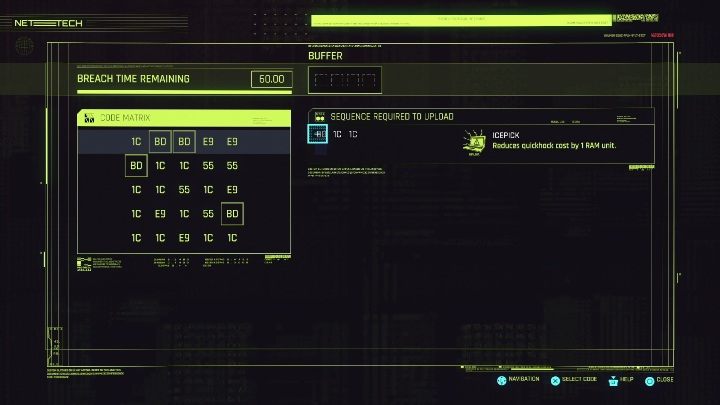 Next step. Let's go to the code's matrix.

The first symbol is BD. On the matrix you can find as many as 4. However, you must choose one that will lead you to the 1C symbols. It's the second point you have to mark. Remember, however, that you have to move from 1C to the next 1C. 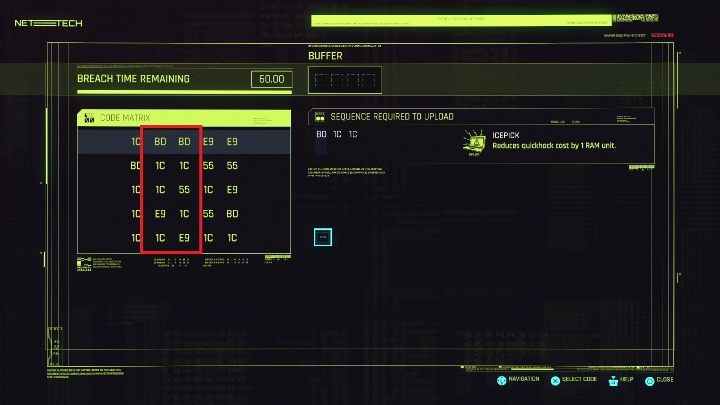 Your task is to find such a BD symbol, which is in the same column as 1C.

In this case, the second and third column will work well. 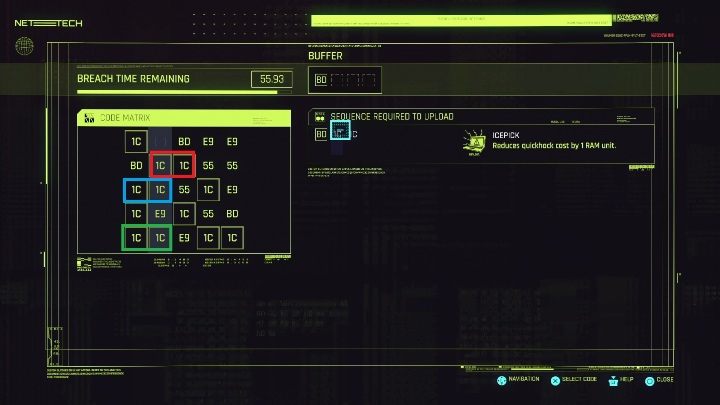 In the second column you have three 1C symbols. Take a close look at the rows they are in. Find one in which there is another 1C to complete the task.

In this case, each of the three rows will work perfectly. You can see on the screen above how easy it is to find the matching elements. Even if they are further away, all that's important that they are in one row, and you can use them. 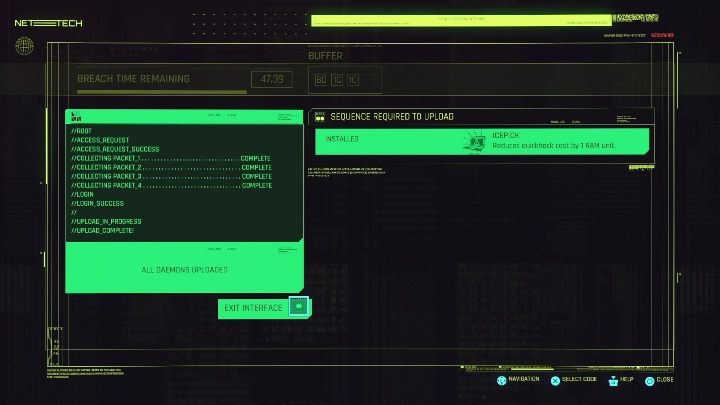 After starting all the daemons, you will finish the mini-game successfully. 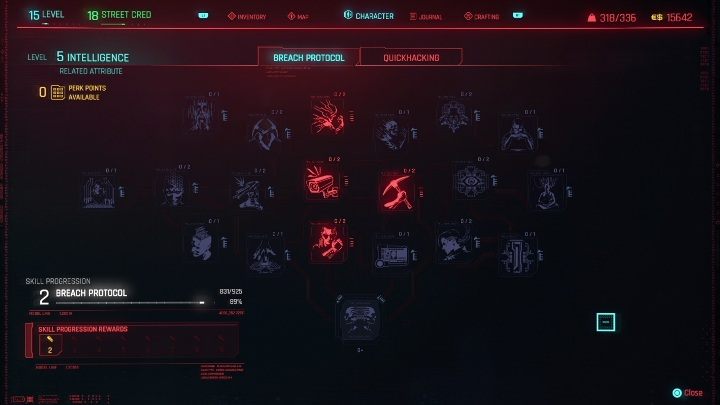 In order to purchase the perks for the Breach of Protocol you must:

When it comes to the perks that will directly influence the mini-game, they are as below:

Head Start - this automatically activates the first daemon from the list;

Compression - the length of the daemon sequence is reduced by 1;

Transmigration - when hacking, the time increases by 50%.

Hacking - how does it work? 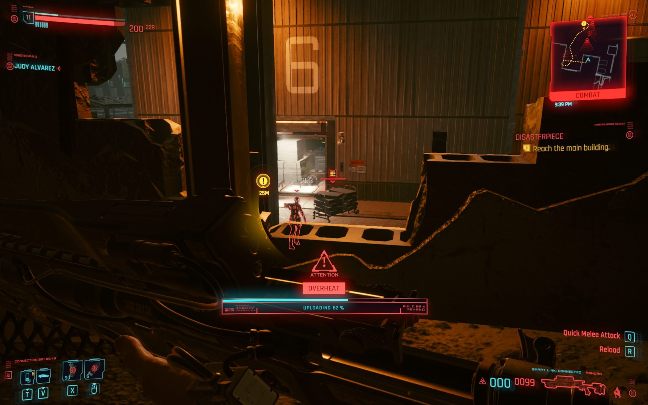 Hacking requires composure and calm. It is best if you try to move quietly so as not to be detected.

If you want to learn more about stealth, please visit the Stealth and quiet combatpage. 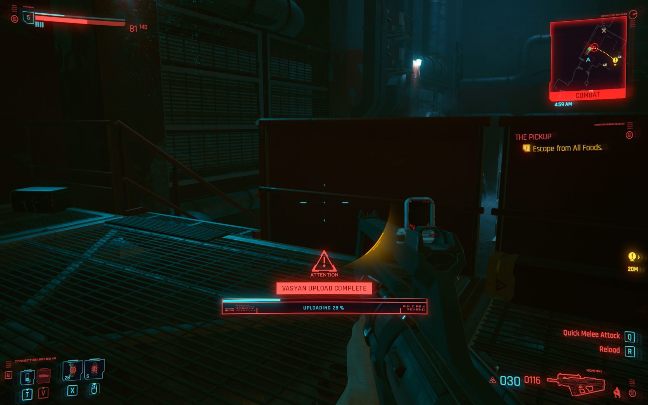 If you want to hack something, scan your surroundings first. Available objects will be highlighted. When you focus on one of them you will see a list of available battle hacks that will affect the behavior of the object. 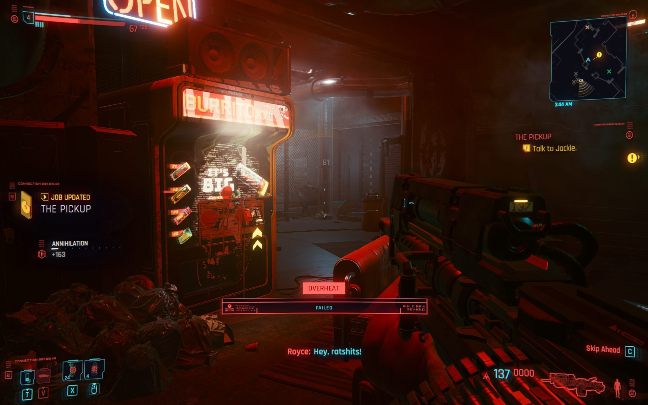 The development of hacking depends on many factors. They are affected by many variables that may limit you, such as RAM.

If you want to get serious about hacking you have to invest in:

Hacking - who is affected? 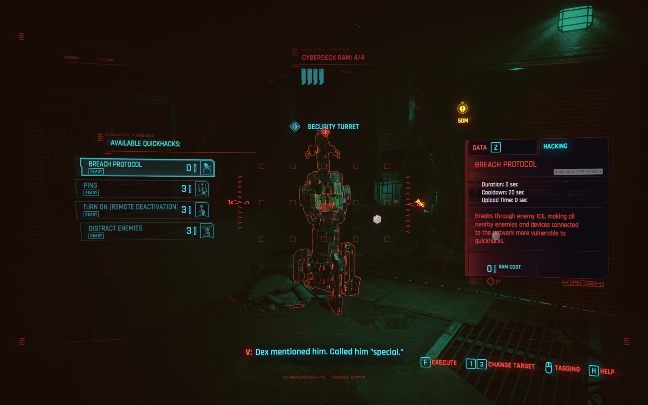 In the game you can hack different objects and characters. However, you can't treat everyone in the same way, each object has its own specific capabilities that you can do.

Remember that your hacking depends on the attributes you develop and your experience level. Some things can only be performed after unlocking a certain ability. 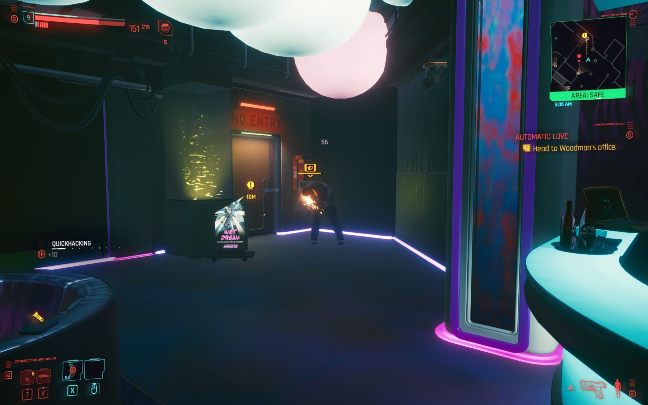 The cost of RAM lost during quockhacking can be adjusted by gaining new abilities and levels.

You increase the maximum amount of RAM by purchasing new attributes for intelligence and cyber software.

Additionally, it is worth remembering that you recover RAM if you do not take part in a fight.

If you want to learn more about attributes, have a look at our tutorial page, where we have described the most important perks in detail. 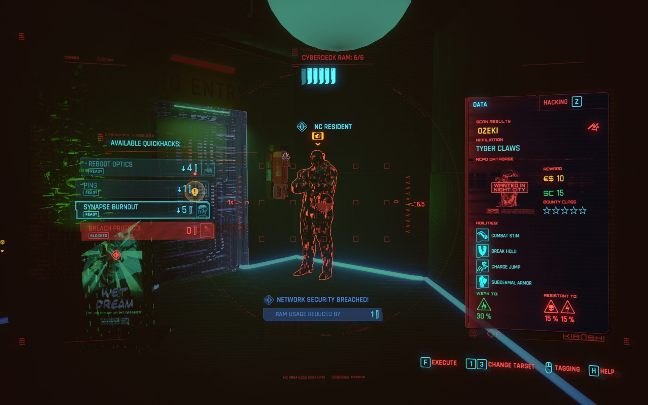 Quickhacking is a list of actions you can perform on a given object/enemy. They appear after a device or a character is highlighted on the scanner. This list is not always the same. A lot depends on the object you are trying to hack.

If you want to learn more about the actions you can perform with hacking, have a look at a separate page, where we have described in detail the full list of available hacks in the game.

Quickhacks - how to get new ones? 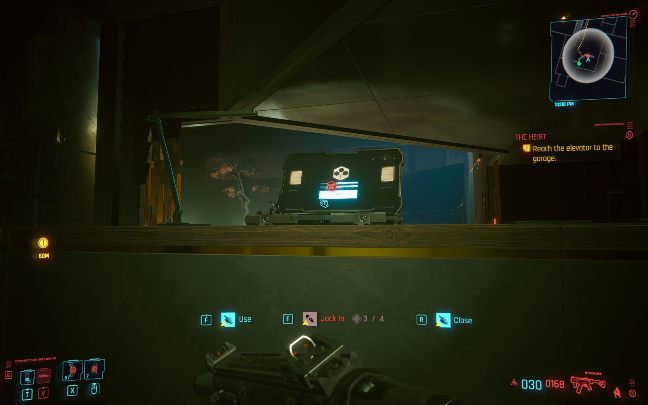 You can get new quickhacks in several ways: