The following page of the guide to Age of Empires 4 contains a walkthrough of The Battle of Pontvallain mission in The Hundred Years War campaign. You will learn how to prepare for battle and how to defeat the invading enemy troops.

The mission objective is to defend the town of Pontvallain from the English army. Once you begin the mission, a timer will start in the upper left corner of the screen, and you will have only 16 minutes to prepare for battle. The invasion of Pontvallain will be preceded by 3 raids of enemy troops.

Mission success depends on gathering resources immediately, managing them accordingly and as few losses as possible.

The map below shows the most important buildings, resource deposits, and locations in The Battle of Pontvallain mission. 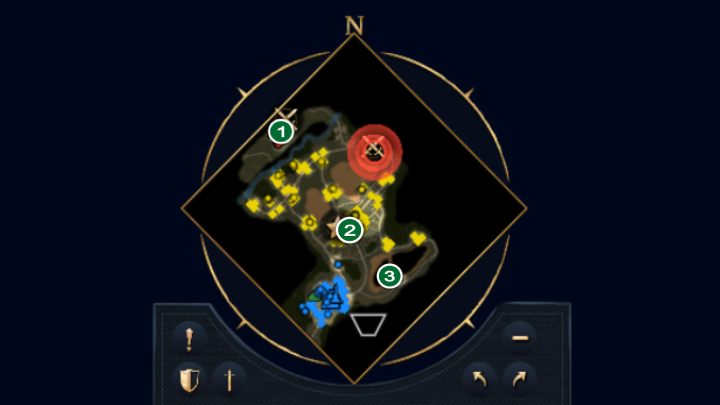 At the beginning of the mission, you will have very limited resources and a small amount of buildings. Your priority should be to build a Market and additional Barracks. 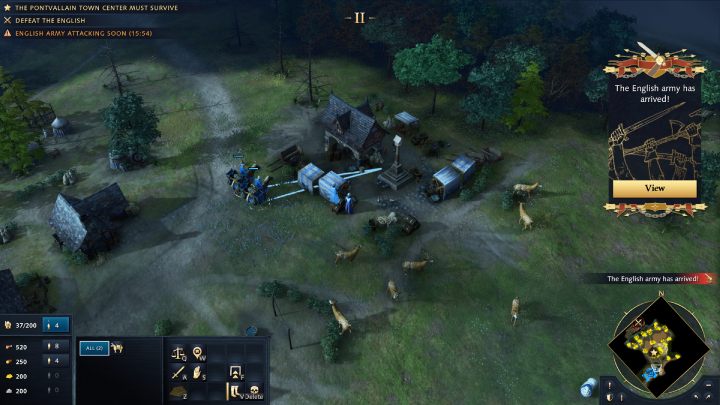 Hire 2 laborers to build the Market. When the building is complete, immediately hire 2 additional Traders and send them to the market in Pontvallain. This way, you will be able to accumulate gold right since the beginning of the mission. 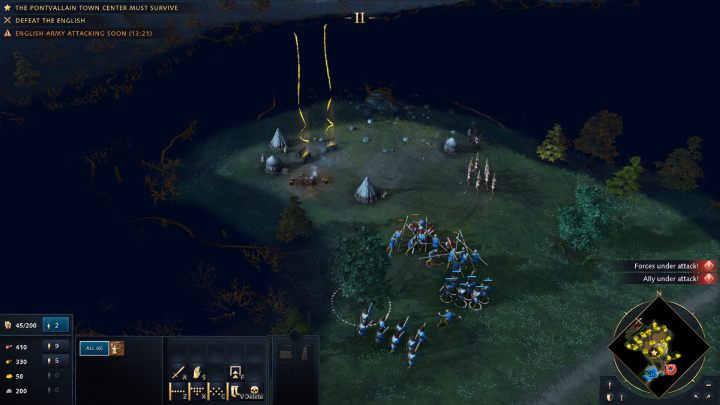 An additional source of income could be the gold mine, located to the east of your village. To do so, you must first destroy the bandit camp which guards access to the mine.

Hire some new workers and employ them to cut trees and hunt. Build a new mill and a few farms.

Build at least 1 additional Barracks and quickly start making new military units. Set up Rally Points in Pontvallain. In the meantime, try to collect 600 gold and 1200 food to build the Landmark and move on to the next era. 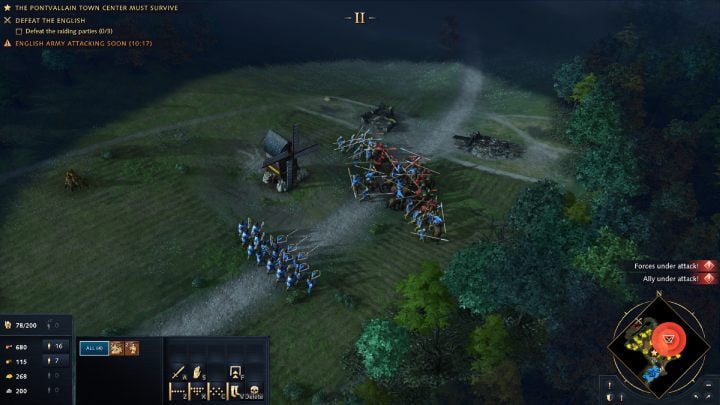 When the timer in the upper left corner of the screen reads 13 minutes and 15 seconds, the 1st enemy wave will march on Pontvallain. Prepare a minimum of 20 spearmen, 10 horsemen, and 20 archers and set out for Pontvallain.

Meet the invaders halfway and kill all enemy units. 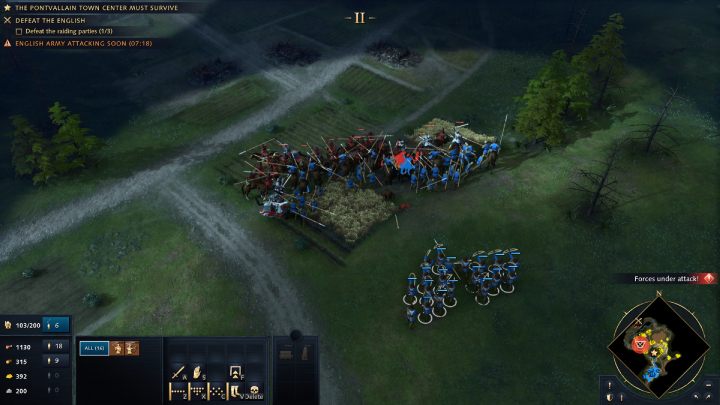 The 2nd enemy squad will arrive when the timer reads 9 minutes and 15 seconds. Prepare a minimum of 30 spearmen, 20 archers and 10 horsemen to defeat enemy units.

If you have managed to collect the necessary amount of resources, build the Landmark. Buy upgrades for the military units and make some RoyalKnights and other soldiers available from the 3rd era. 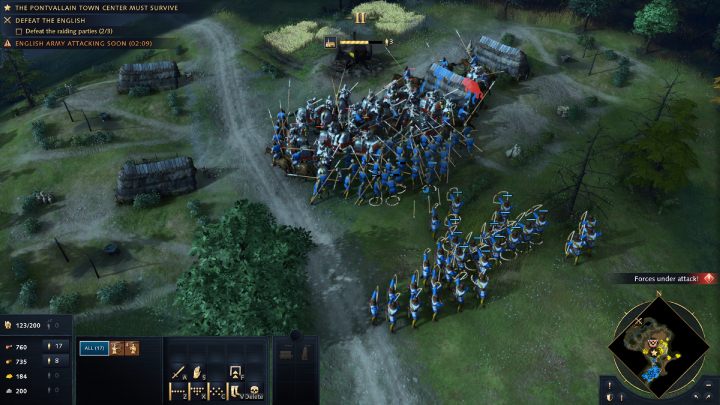 The 3rd enemy squad will arrive when the counter reads 5 minutes and 15 seconds. Prepare a minimum of 40 spearmen, 30 archers, and 20 horsemen and defeat the incoming heavy-armed cavalry.

When the timer runs out, the remaining army assembled on the northwestern part of the map will move on Pontvallain. Just like before, the enemy army will split into 3 squads. 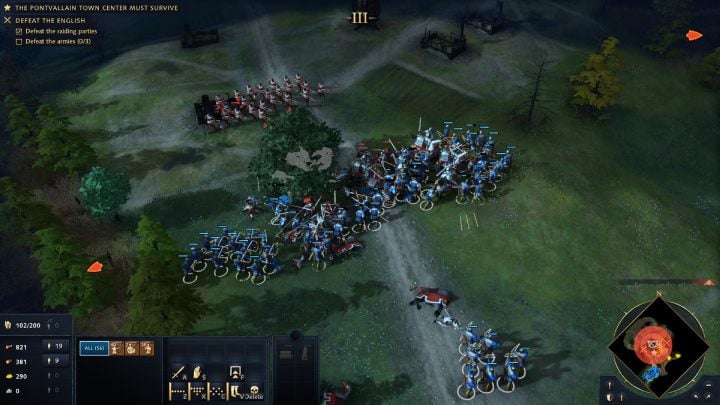 To defend Pontvallain, you will need about 60 infantry, 40 archers and 20 cavalry units of regular and heavy horsemen.

Find out which army will reach the city the quickest and try to meet it halfway. Keep making new units and setting up Rally Points in the center of Pontvallain. 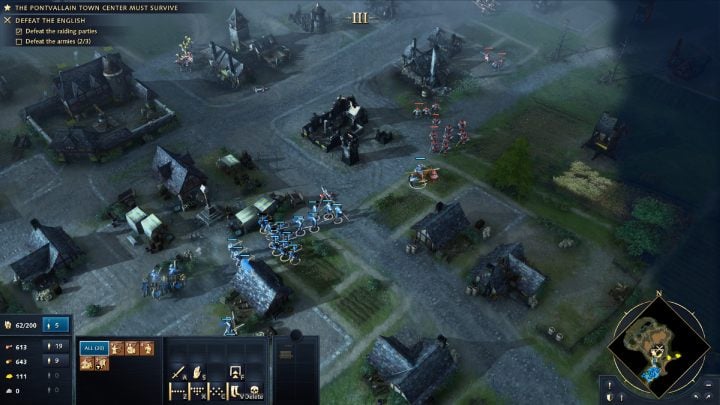 The largest enemy unit will attack from the north. Eliminate all enemy soldiers and deal with the survivors.

The mission objective is to protect the Town Center, so don't worry if an enemy army reaches the town.