This page of the XCOM Chimera Squad game guide contains complete information on the turn-based combat. You will learn the rules of turn-based skirmishes and what commands can be given to team members. The combat system has undergone many major changes compared to XCOM 2, and getting to know them is crucial even for series veterans.

Key assumptions of the combat system

Turn-based skirmishes in XCOM: Chimera Squad show some similarities to battles in XCOM 2, although many things have also changed and some mechanics have been added for the first time. Below is a list of the most important features of the turn-based combat system in the game.

Preparing for the mission 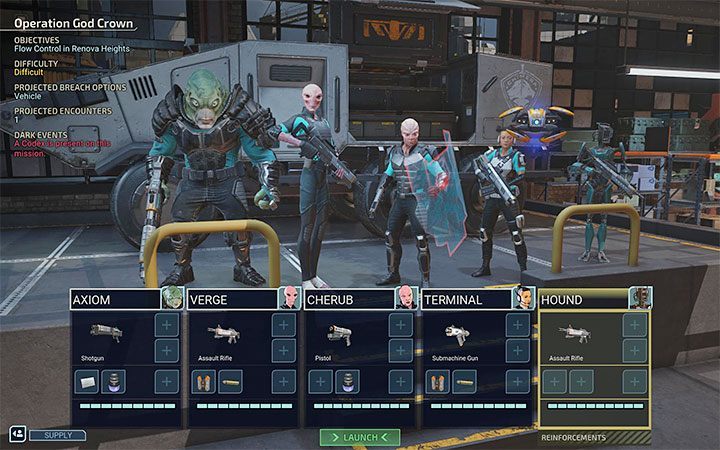 For each mission, you must choose four heroes from among the currently available ones. You start the campaign with exactly four heroes, but as the game progresses, more agents will join the Chimera squad. You will eventually have 11 characters to choose from. It should be noted that the choice of agents for the mission isn't just a purely cosmetic choice. Each character has their own abilities and weapons. Some team members may also be more useful in certain types of tasks due to their skills.

The game won't allow you to start missions unless you have 4 characters in the team. If you are suffering from a shortage of agents, relieve them of other duties like training or helping with research in the command center.

After developing android-related technology, you can send them to accompany agents on missions. Be sure to take an android with you on each mission - when you lose the main team member (bleeding out and losing consciousness), it can replace the lost character in subsequent battles in the same mission. 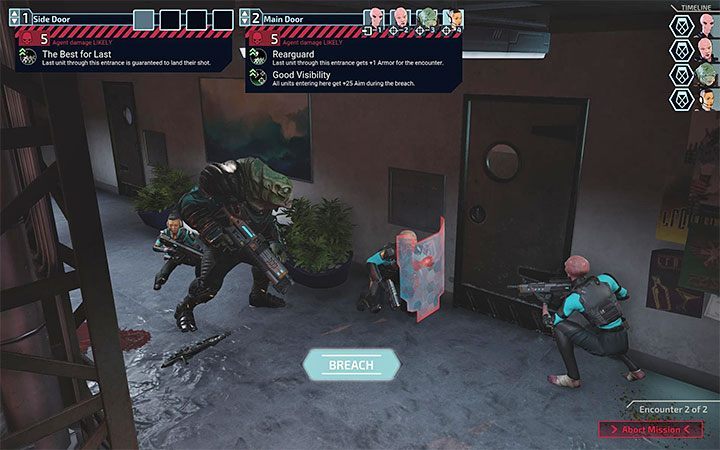 Each mission consists of 1-3 battles and each battle is preceded by a Breach phase. This is nothing more than planning an attack on the room/area where the opponents are.

When preparing for an attack, the game may offer one to several possible breach variants. It's up to you how you use it - you can deploy all agents to the same entrance or deploy them at different entering points. The latter variant can provide greater versatility and, for example, the opportunity to attack enemies from several directions.

Each potential starting point has passive features. There may be some advantages (e.g. guarantee of success of the first attack by a given team member) or some disadvantages (e.g. difficulties with aiming). In addition, some starting points are only available to agents with specific items (e.g. explosive charge to tear down a piece of a wall) or skills (e.g. Torque can squeeze through a tight ventilation shaft).

When you enter the room, the game activates slow-motion and you can be the first to attack your enemies. Each of the 4 playable characters can specifically attack one of the visible opponents. You have several different attacks. Enemies at the start of your team's attack may e.g. be in surprise state or aggressive. The latter is dangerous because if they don't die while you are entering the room, they will immediately perform their first attack. Eliminating them should be your priority. 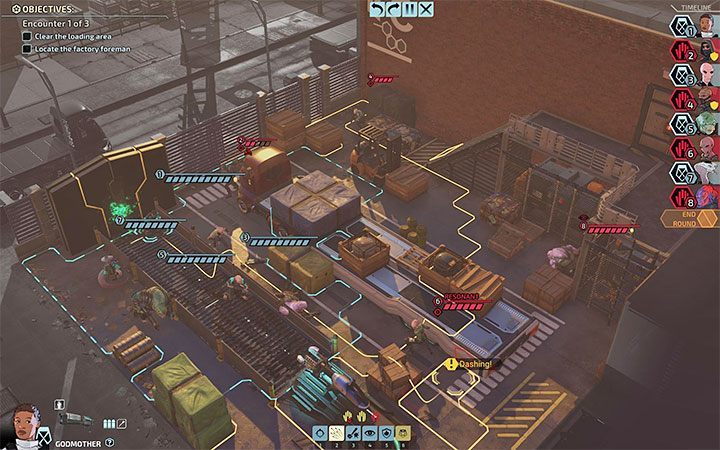 Characters move in turns alternately with their opponents. This is a big change compared to the first two XCOM games, which allowed all characters to perform moves within a given turn. After all the characters (team and opponents) have completed their moves, the round ends.

The fact that the moves are performed alternately doesn't mean that an agent can only perform one action in a given round. The mechanism is similar to that in XCOM 2. Some actions consume only 1 Action Point (e.g. moving in the blue area, reloading the weapon), and some need 2 Action Points (e.g. moving in the yellow area, shooting). You have full discretion whether you want to use 1+1 action point or 2 points immediately.

The turn order is displayed on the timeline in the top right corner of the screen. It allows you to see which team members and which opponents will take their turns in the near future. This can be used in various useful ways, e.g. to weaken or stop opponents who are to take their turn.

The timeline can be modified. Chimera Squad can use the Team up once per mission, allowing the chosen hero to jump to the top of the queue. This is useful, for example, if you want to activate the strongest character or give an injured character an opportunity to escape to safety. Opponents may also have similar abilities, such as swapping places on the timeline or preventing the hero from making a planned move (e.g. by getting stunned or mind-controlled). 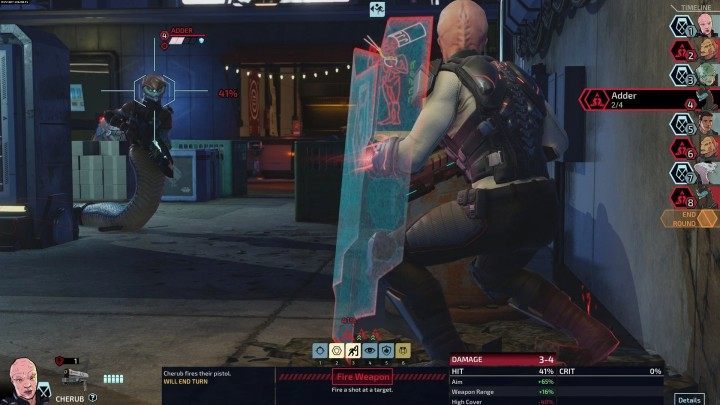 At the bottom of the screen, an action list for the current character is displayed. This is a similar mechanism to that of the earlier games in the series. The list of available actions may include firing a gun, using a character's unique skill, throwing a grenade or going into an Overwatch state. Some actions force you to wait a certain number of rounds for recovery, while others can only be activated once per a mission. Try to save them for the toughest fights.

Using cover is very important. In the game, there is still the division between low and high cover - the latter better protect against potential injury. Team members can also use energy shields capable of blocking certain enemy attacks if they are unable to take cover.

Many covers may be destroyed during fights. Explosive barrels and parked vehicles pose the greatest potential threat. Standing near to an exploding object can lead to serious injuries. Of course, you can also use them to your advantage and fire when enemies are near them. Remember, however, that cars will explode "with delay," not immediately during the same round. 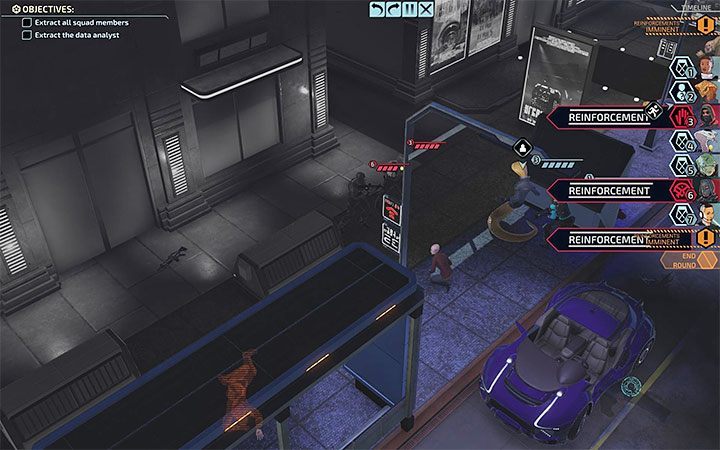 Hostile reinforcements may appear in many missions. This will happen if enough time has passed or if you have completed one of the objectives. The game warns of upcoming reinforcements by adding information about them to the timeline - you will be able to determine the exact moment of their arrival. New opponents are automatically added to the queue on the timeline and will usually be able to make their first moves quickly.

Try to end the battle before reinforcements arrive. First of all, remember that you don't always have to eliminate 100% of the enemies, unless one of the mission objectives requires it. Sometimes it is better to focus on reaching the evacuation zone or the object / character associated with the current task. As a last resort, try to prepare for the reinforcements and order your agents to go into Overwatch mode - they should be looking towards the marked places where reinforcements will appear.

Each encounter within a given mission has its own separate objectives - they are displayed in the top left corner of the screen. Pay particular attention to goals with a time limit. You must complete all the steps before the assigned number of rounds, otherwise, the mission will fail.

The game does not allow the loss of any member of the Chimera squad. Keeping the characters alive is mandatory - the death of any of the squad members results in mission failure. You will then have to repeat the battle or reload one of the previous saves.

The loss of all health points by a given character causes him or her to bleed out (Bleeding Out status). You need to save them by reaching them with another character and use Stabilize skill.

A hero saved from death doesn't immediately return to combat but remains unconscious for the rest of the mission. It doesn't necessarily mean you have to continue playing with a smaller squad. If an android has also arrived in the mission area, it could replace an injured agent in subsequent encounters.

Heroes who have fallen on the battlefield may receive "permanent" wounds/scars - this reduces their statistics. In order to remove the scar, go back to the command center, go to the training tab, and order the wounded hero to undergo several days of training to return to full strength. It is worth noting that an agent may receive several scars if they haven't healed from previous ones. This is very undesirable - it will make their performance even worse.