This XCOM Chimera Squad guide provides information about winning turn-based battles, skillful team management, and making the right decisions on the tactical map. All this information and guidance should be helpful in successfully completing missions while keeping all squad members alive.

The majority of the space in our guide is dedicated to the Guide to XCOM Chimera Squad. It includes starting tips regarding the most important gameplay mechanics. These tips should help both seasoned players and those playing for the first time. An important part of the guide is a detailed description of the turn-based combat rules. The formula of turn-based skirmishes has undergone some significant changes compared to the previous installments of the XCOM series. We explain the new and modified gameplay elements in detail.

Another important issue included in our guide is the Chimera division management, which this time is predefined. We describe the skills and specializations of all team members and give tips on how to best use their abilities on the battlefield. Our guide also contains the description of the XCOM headquarters menu. Learn about the game's core command center features, which include planning further missions, training soldiers, and equipping Chimera squad members with new gear. We also discussed a number of other gameplay elements - you will find descriptions of, for example, androids, field teams, character statuses, best technology, campaign progression, or hostile factions.

We also have a FAQ section with answers to frequently asked questions. You will find information on topics such as stopping enemy reinforcements from appearing on the map, unlocking the best weapons and gadgets, replenishing resources, dealing with the growing anarchy level, playing on the Ironman difficulty level, or avoiding losing a single mission or the entire campaign. The guide ends with the trophy guide for XCOM Chimera Squad, controls, and PC system requirements.

XCOM Chimera Squad is the next installment of the popular turn-based tactical strategy series. This is not a full-fledged sequel, but a slightly smaller production that focuses on portraying the actions of the titular Chimera Squad. This time the action is set not the whole globe, but a futuristic metropolis - City 31. The tactical layer of the game shows many similarities to XCOM 2, although it also contains some significant new features - among other things, players can command the aliens who are part of the Chimera squad, move based on a timeline, and determine where the team members are to begin each mission.

Chimera Squad is a smaller production than the main games in the series, although this is not necessarily a disadvantage. Some gameplay elements are very similar to those from XCOM 2, but a number of major changes were also made to give the player's familiar turn-based combat system a breath of freshness.

XCOM: Chimera Squad is a shorter game than its predecessors, however, it still offers quite a lot of content. A single campaign playthrough should take 20 to 25 hours. However, this value can change due to various factors like the number of missions played and repeated, or the difficulty level.

For more information on the expected length of the game, see How long to beat XCOM Chimera Squad?.

Does XCOM Chimera Squad have a multiplayer mode?

No, the available content is for a single player only. Neither local nor online multiplayer modes are offered. Of course, it is not out of the question that the game will continue to be developed will receive some multiplayer content in the future.

Is there a map of the entire globe available in the game? 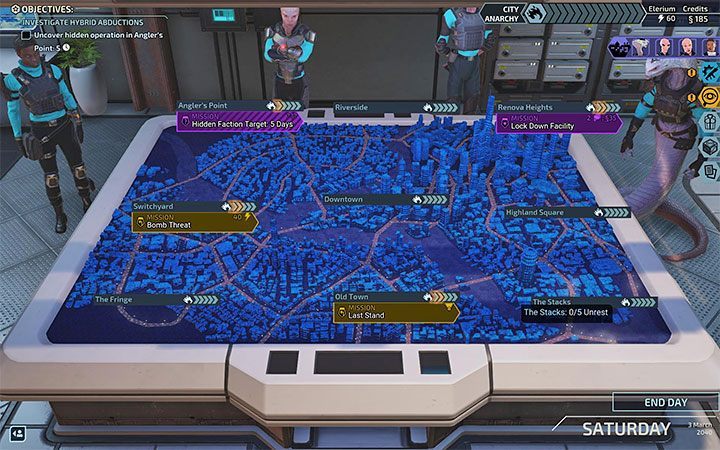 No, in XCOM: Chimera Squad players don't operate all over the globe. There is one large metropolitan area - City 31. So this is rather a micro-scale area of operations when compared to the map size in from the predecessors. A sililar approach was featured in X-COM: Apocalypse. Fortunately, this does not impose any significant limitations on the complexity of the gameplay. Players have to make a lot of difficult decisions and make sure they maintain order in all the city districts.

Will the game be released on consoles?

At the time of writing this guide, XCOM: Chimera Squad was planned to be released only for PC. It is not out of the question that this will change over time. Previous parts of XCOM were released belatedly on consoles and mobile devices.

Does the game have high system requirements?

What is the overall plot outline of the new game?

The action of Chimera Squad takes place 5 years after the events of XCOM 2. The space invaders were driven from Earth, although aliens with a more peaceful attitude were allowed to remain on the Blue Planet. Attempts were made to create a civilization consisting of many coexisting races. The action of the new game takes place in City 31 and this futuristic metropolis is meant to be a kind of example of the positive interaction between humans and aliens. Not all residents of City 31 share this worldview, and as a result, the titular Chimera Squad was formed. This team is made up of humans and aliens and their job is to keep order in the city.

When does one lose?

There are two main reasons for failing in XCOM: Chimera Squad:

Read more about it here: Losing the campaign - how to avoid it?.

Can you play the game as aliens? 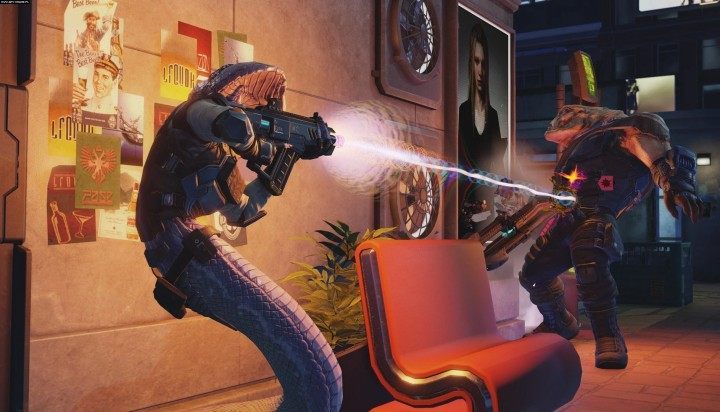 Yes, some members of the Chimera squad are aliens working with humans to bring order to City 31. Each of these characters possesses unique abilities related to the alien race they represent (e.g. Sectoid's mind control and Viper's strangulation).

Can you change the character's appearance? 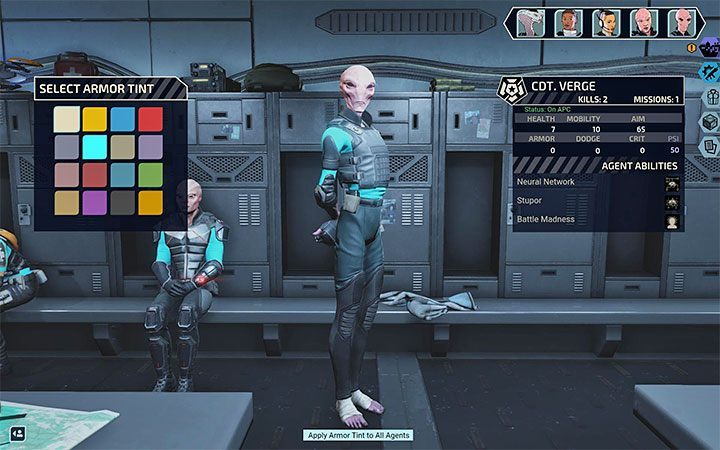 Unfortunately, the character customization is very limited. Visit the Armory and select a hero. Then click on the Tint Armor button. You will see a color palette - you can change the color of a piece of the agent's clothing.

The character's appearance can also change as they acquire pieces of equipment, such as weapons, armor, or drones. All changes are "applied" to the current character model.

Why can't I start the mission? 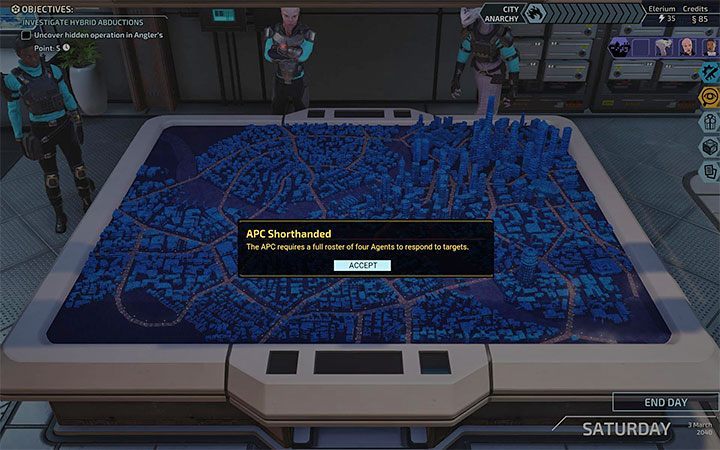 The most common reason you can't start a mission is the lack of a full four-person squad on standby. If all four character slots are not filled (top right corner of the screen), the game will display a message similar to the one in the image above.

That's the most problematic issue in the early hours of the game when you have a limited number of agents. As the story progresses, more playable characters will be added to the Chimera squad. This will allow you to send people on missions and do other things at the same time - assign free agents e.g. to research, training, or Spec Ops operations.

Are there flying machines in the game? 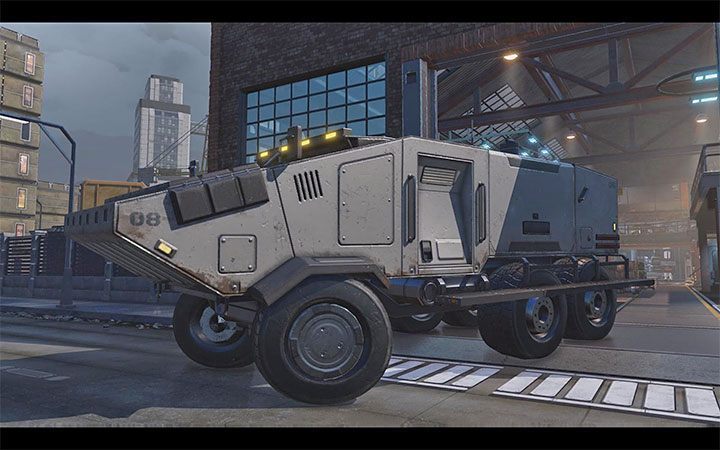 No, there are no aircraft in XCOM Chimera Squad - the action takes place entirely on the ground. Members of the Chimera squad use an APC armored vehicle to travel to the districts of City 31.

Is the fog of war in the game? 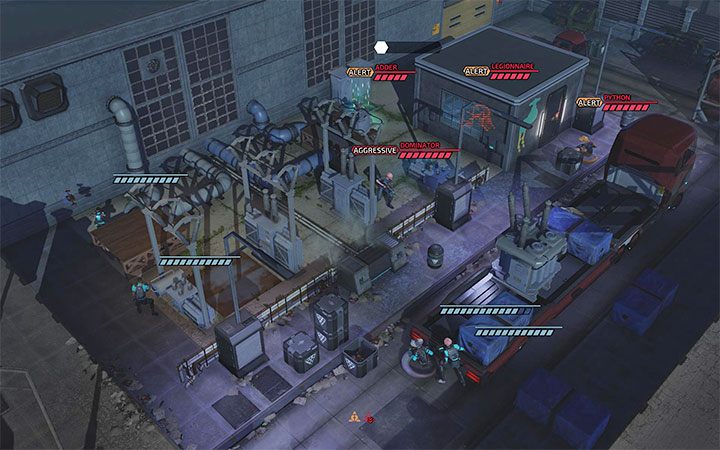 No, there is no fog of war in XCOM: Chimera Squad. All opponents are visible when a fight starts. It should be added, however, that during the Breach phase (entering a room with enemies), your subordinates may attack only those opponents who are in their field of vision at that point.

Are there time missions in the game? 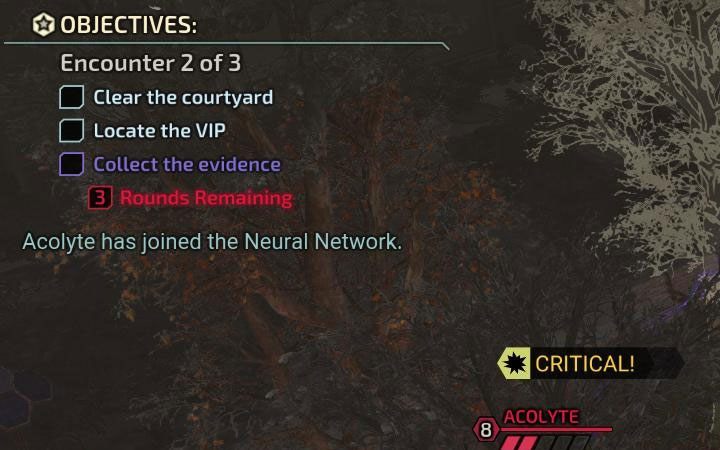 Yes, but that only applies to certain tasks. For example, you may be asked to gather important intelligence before it is deleted. In the example above, the game gives you 3 rounds to get evidence.

Fortunately, many missions in Chimera Squad don't have a time limit. Nevertheless, the game tries to "hurry" the player by sending enemy reinforcements to the mission area. The topic has been described more widely on the Hostile reinforcements - how to avoid? page.

How much does XCOM Chimera Squad cost?

The official price of XCOM: Chimera Squad is €19.99 but all purchases made before May 1, 2020, will be subject to a 50 percent price reduction. This means Chimera Squad can be purchased for around €9.99. This discount applies to all large online stores, including Steam.

Where are the XCOM Chimera Squad saves stored?

Access to the saves can be useful if you want to copy them, or if you want to "cheat" while playing with Ironman and Hardcore modifiers enabled (the latter erases the saves when you fail a mission).

If you have XCOM: Chimera Squad on Steam platform, the save files will be in:

The Best Strategy Games of 2020 - 10 Strategies Worth Your Time

This year was, quite surprisingly, a year of strategy games, bringing a diverse set of games to cater to all tastes. The question is, which games are worth the most attention?