Jonathan Gitlin from a prison on stadium's turf is accused of stealing few items. He wants you to help him prove his innocence. Go to the steam tunnels under Angel Oracle. The entrance is in a toilet in the right part of the stadium. 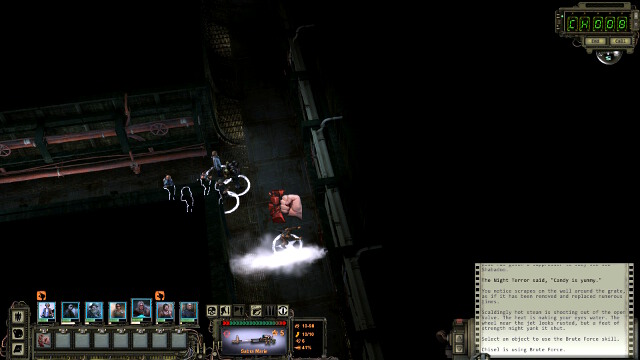 Use the Brute Force skill to extinguish the steam

In a tunnel you have to watch out for a steam that blocks your way. Every time a character passes a steam it will be hurt. Use the Brute Force skill (or Mechanical repair, if Brute Force fails) on valves to clean your way. However, you do not need to do that, because damage dealt by the couple is not too high.

You will also have to fight with few cockroaches. You will find corpses of Synth and Robbinson who have ids and stolen equipment. Inside the toaster, you also find Tissues for Kids and a bag of cat litter in the tunnels ahead. Speak to the sheriff Marshall on the stadium to acquit Jonathan. When you will visit him later you will receive your reward which is an armor with defense value 9. You can also return stolen items to their owners and receive 150 scrap (Lindy Lou in the north part of the stadium, sister Flinkman in a hospital and Mr. Paladino near to the Fletcher's cage).