Titan  On it you've to mount scrambler, which you got from Sadler. Father Enola shows with his guards and they'll attack you. The best choice is to use a granade, because they'll be in small group. After this Militia will attack Temple on surface. There you'll find a Sadler, who order you to get to Silos 7 (7 on World Map).

Alternatively with high Perception you can discover, that Titan is musal exhibit. Also after that Enola shows up, but he won't attack you and say the truth. After that you can choose if you want to fight with him or go to Silos 7 and give monks a real missle. If you decide to cooperate you'll be able to go freely in undergrounds - monks won't be attacking you anymore.

Main entrace  Main entrace from main gate on the surface. Watch out for monks and an alarm in doors leading deeper into complex.

Hospital  You can get here from hospital on the surface. You'll find here dr Kyle, from who you'll get a book giving +1 Computer skill, but only when you peacefully talk to dr Braum on the surface.

Chapel  Entrace from chapel on the surface.

Ungauarded enrance  Here you can go down from unguarded entrace on the surface. Remember about alarm in doors to complex.

Prison  If you're trying break into Temple using force you can go to prison. Here Enola will give you a quest, to get to Silos 7. If you refuse he'll put a radioactive gas into your cell, so you can get out of there before it's kill your team. To do this break leg from one of beds and lift bars with it (you need Perception to discover that bars are loosen).

Brother Guano  Imprisonned. He'll telling, that Enola lies to everyone, and his Titan is fake. He will be trying to convice you to go to Silos 7 (7 on World Map) and get to monks a real Titan.

Toaster  Inside you'll find depleted uranium, which you can bring to Mercaptain in Citadel.

The main part in the temple where there is the holy Titan. There are three ways to get here:

In general, you will be attacked here, by all monks, on sight. The only exception is when you agree on cooperation with Enola that you encounter here (at the Prison, or when you discover the truth behind the Titan). Additionally, you need to watch out for the traps and door alarms. The fastest way to the warhead is the side passage, above, that is not being guarded (the code to the door on the surface- 60845; there is a door alarm inside the complex), and from there, to the right of the map (across the traps) to the Titan. The corridors are being patrolled by the monks but, if you do well, by hiding out of sight, you can get to the warhead without being spotted. Of course, you can simply cut your way through with weapons,. Remember, then, to deal with the suicide monks immediately. It is best to fire at them with the sniper, still before you are spotted and before the fighting begins. You then stand a chance at killing them on the spot, without giving them the opportunity to start their turn. 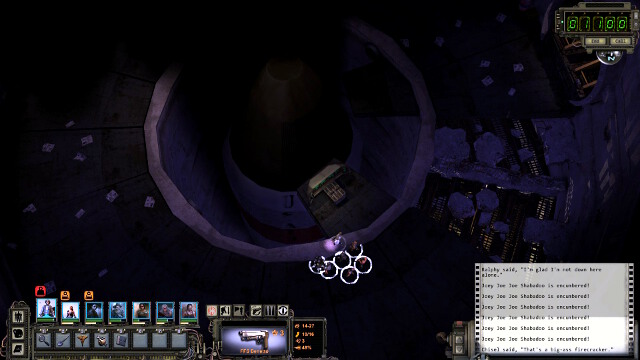 Once you find the Titan, you can discover, with Perception, that it is, as a matter of fact, a model at a museum. You will then be talked to by Enola, who offers you that you follow him to Silo 7 and give him an actual warhead. If you are working for the militia, install the jammer that you receive from Sadler. You will then have to kill Enola.