Ralphy (NPC)  When you'll meet Ralphy he'll be drowning. To rescue him use Brute Force skill or shovel on the closest totem (that further from bridge). If you knock over the second one you'll kill Ralphy.
When you rescue him villagers will be more kind to you, and when you approach Ralphy's home you'll have an option to join him to your party.

Jessie / Bomb  On a playground Jessie'll be waiting for news about Ralphy. Jess is Casey James's - leader of atchions - daughter, and her fate has a lot in common with main quest in Rail Nomads Camp. Next to her, on a bike is booby trap, which you can find using Perception (Angela Deth can see this easily if she's in your party). If you won't dissarm bomb Jessie will die. Fact, that she almost died from Atchisons bomb can be an argument for negotiations about peace in your conversation with Casey James.

If you've Ralphy in your team get there to let them talk to each other. Ralphy for a moment will separatefrom team, but when he finish to talk you can rejoin him. Jessie then will go to Atchisons part of a Camp.

Locomotive  Famous Topekan's train, which you can talk about with near engineer.
Locomotive has lack of brake shoe stollen by atchisons. You've to give them back to Topekans if you wanna stand by their side in conflict.

Also you can pull string on side, to turn whistle and feel like real engine driver.

Scotchmo (NPC)  One of group of homeleses and one of the most original companions, who can join your team. You can join him when you meet him for the first time, but if you say no, you won't have possibility to join him later.
Attention - Scotchmo won't join your party if you have very little Charisma, he'll say just no and won't talk with you anymore. If you have that problem try to load last game save and firstly join Ralphy to your team who has 4 charisma points, and that could help.

Scothchmo will want you to help find his hidden alcohol, to which he'll be leading by smell.

Destroyed radio tower  If you let both Highpool and AG Center fall, you'll be obligated to repait it with help of parts from destroyed towers in those locations and device from Kekkehbah. Then mount a Repeater Unit.
Tower doesn't have any matter, if you rescued any location (Highpool/AG Center).

Scotchmo's stock  In the ground you'll find Scotchmo's hidden stock - you've to get shovel with you to dig it up.

Wounded topecan  You can rescue him using Surgery. Tell about him to Kekkhbah.

Kathy Bowling's house  To this place you need to take letter from Robert Bowling in Rangers' Citadel.
After conversation with Kathy to house will enter Pitbull from Red Scorpions, who is her owner. You can buy out Kathy for 500$, let him take her or kill him - death of Pitbull have influence on events in Prison - it will immediately turn Red Scorpions against you.

Ralphy's home  If you rescued Ralphy you can talk to his mother in their home, who will ask you to take Ralphy to Desert Rangers team.
After that with Ralphy you should go firstly on a playground and let him talk to Jessie.

Amusement arcade  Quare wants from you to get him a legendary Philips CD-i console. You can buy it from trader in Atchisons part of Camp. For returning console to Quarex you'll get 100$. Also you can ignore Quarex and give console to Mercaptain in Citadel, and she'll give you requisition paper.
Attention - Quarex will be mad at you, if you try to steal from him after entering into his place, and he won't give you this quest.

On exhibit there's his game pistol. You can brake the glass and take it, to mount on your weapon. If you want to do this it will be better if you give him console first.

Bar  Inside you'll find guy named Samuel, who has the Ace's notebook. When you'll get it from him bring it to Vargas. If in you team is Angela - she'll always kill Samuel.

Holliday  He sells weapons and armour. You can help him to get back his supplies which had beed stolen, and you'll get a discount. Don't touch anything.

Hell Razor  Body, notebook and star of Hell Razor. Bring those to Vagras in Citadel.

Drug dealer  He wants you to find a radioactive mushrooms for him. You can take about his activity to Kekkahbah.

Radioactive mushrooms  You can give it to drug dealer in north part of camp.

Aethelwulf's Utopia  Under the yellow carriage with "unino pacific" caption you'll find a book on the ground. Book can be given to Mercaptain in Citadel - award for that is additional rewision paper to get one free gear.

Rat  There's a statue, behind which is hidding a mutated rat. Use Animal Whisperer skill on it, and rat will be following you and helping in battle. His pretty strong.

Museum piece  Whole content of carriage it's one big Easter Egg dedicated to Android Hunter. On bookcase you'll find a book "Do Androids dream about electical sheep?". Book can be given to Flintlock in museum in Citadel.

Side entrace  One of side entraces into Kekkahbah's base - you can use it to steal Golden Spike without being noticed (if you turn also power off and if you want to help Atchisons).

Before you start to do anything with generator disarm the alarm. Then after you turn off the power Kekkahbah'll send someone to check what happend. Kill him or get fast to safe distance - if noone is around generator, so noone will know that you do this. Now you can safely enter to building and take a Spike. Send someone with Lockicpikg skill, because Spike is closed behind glass. Then just exit the building and that job is done.
After turning off power try to be pretty quick, because some time after that Topekans will pu a torches inside building and there will be light again.

Library  If you have enough high perception, you'll find on bookshelf a book giving +1 to Disarm skill to one, who'll read it.

Anna  Anna will take team members to physical paradise for not high price. Those braves cat additionaly get a specific infection in one spot...

No-man's-land  Wild and uninhabited areas. You'll have to fight with wolves and toads in here. There are also many hidden treasures.

Cemetery  Paradise for graverobber. There's buried a Scotchmo wife - if you have him in your team and you'll try to dig up her grave you'll be attacked by him. Ralphy also won't be pleased but he won't do nothing.
Also you'll find here a toaster.

Turtle  With Animal Whispering skill you can turn turtle on his legs. Then he will lead you to give you a reward, but it can take some time... On map is place when turtle's stack is, but firstly he has to approach this place.

Car booby trap  Under the bridge there's a car with hidden bomb, which you can disarm.

Junkies  Some of local junkies will be trying to get some money from you. You can give them money, kill them or drive them away.

Jessie  Here you'll meet Jessie for the firt time, and she will lead you to drowning Ralphy.

Well  You can restock your water supplies in here. 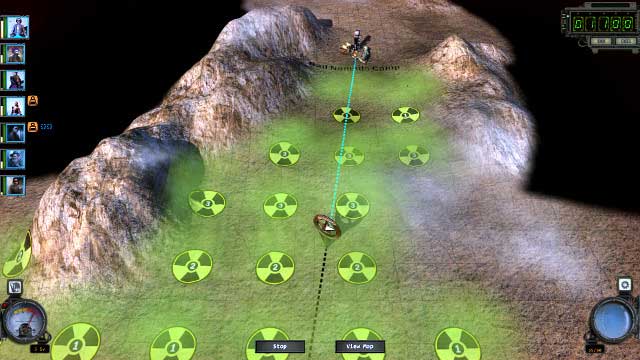 The way to the camp is highly irradiated

Rail Nomad Camp is in the North of Arizona. It is a completely optional location where lots of things are happening so, it pays off to visit it. You find the camp map right next to Ace's corpse, near the Radio Tower. If you missed it, you can still discover the location of the camp, e.g. during a conversation with Vargas, or with Matt Forrestal at the Ag center. Before you get there, I recommend that you buy Rad Suits. The camp is in a highly irradiated area and the radiation reaches level 3. You can buy the Rad Suits at the Citadel. They provide you with protection against level 2 so, you will sustain slight wounds anyways but, they are not going to be too dangerous. Of course, you can attempt cutting through without protection, but you need to take heavy irradiation into account.

The cap itself is what remained of an old railway depot from before the war. Two warring tribes of Topekans and Atchisionians, who are at war with each other, dwell here. The reason for the war is that the Topekans have the Golden Spike that belongs to the Atchisionians, and the Atchisionians have the Brake Shoe belonging to the Topekans, and neither of the sides sees any means of ending the war, before what has been stolen is returned. You can either join either of the factions or bring about the peace. The Topekan camp is chief Kakkehbah's place. He is very proud and he does not wish you to meddle with their affair although, if you happen to obtain the brake shoe, he will gladly accept it.

At the camp, there are many minor quests that are always worth being performed for more experience. Finally, you can include, as many as, three new NPCs from this region. Also, if you fail to save either the Ag Center or Highpool from destruction, it is here that you can mount the first Repeater Unit.

Topekan's headquarters. Here you will find their leader, Kekkanbah, and the Golden Spike which Atchisonians want to get. From Kekkahbah you can learn the background and reasons of the war. Kekkahbah's attitude towards the guardians will differ depending on whether you saved Ralphy and helped topekans in other matters. In general, he will not want you to meddle in the conflict, even if he will be friendly towards the team.

You can tell him about the wounded topekan which you met when entering the Camp and about the drug dealer. He will also give you a task to destroy a local gang that is destroying the railroads - you will find them in the Atchisonian part. For killing them you will receive 50$.

Don't try taking the Spike yet and don't try to even get close to it as it would probably be a suicide. If you plan to help Atchisonian during the conflict, then it would be much more wisely to sneak up through one of the side entrances, and even better - turn off the power in the building by using the generator that can be found outside, at the back.

Kekkahbah will not want to talk with the party and you won't be able to complete any quests related to him after you steal the Spike, even if you do it silently. He will tell you that he is busy.

Depending on other events in this location, you can later find Jessie here. She will be imprisoned by Kekkahnah. You can negotiate her release using dialogue abilities or take her out by force.