After you start your adventure with Wasteland 2, you can form a party of up to four characters. In the course of the game, this number may rise to seven. It can also decrease, if you are not careful. There is nothing standing in your way, if you want to play with three, two or even one character, but this will make things considerably more difficult, and more limited, for you.

The secret of a good party is to complement each other. You do not want four people that use the same type of weapons, because each type works well under certain conditions. Apart from that, you will simply have not enough ammo to go round. You do not want four beefy brainless men, because there will be nobody to keep them alive and nobody will know how to hack into computers. You want a party with no weak points to it. A well-balanced make-up is an explosives expert tough guy with heavy weapon, a burglary expert with a sniper rifle, a medic with a revolver and a chatterbox with energy weapon. With time, this party will rise in power and expands the array of options. 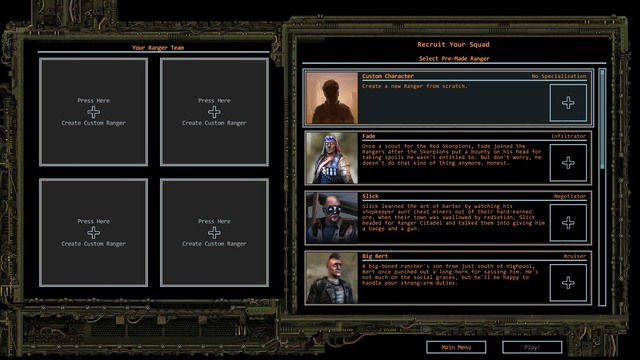 The party may consist of up to four members.

The game offers you a set of predefined characters, who you can include in your party. Each ready-made character has predefined statistics and skills for a specific function so, it is difficult to make a mistake here. Still, you can redefine them, according to your own vision, or create your own characters. By default, the first character that you select or create becomes the leader of the party. This, however, remains without any direct effect on the game, with the exception in cutscenes, where that character represents the entire party in conversations. In Wasteland 2 you play as a party and not as the "chosen one" and his helpers. Even if the leader dies, the next character takes over that function (this goes only for the four original heroes - when they all die, the game is over!). To include someone in the party, click the plus symbol next to the description of the character. To create a character on your own, click plus symbol anywhere on the screen. 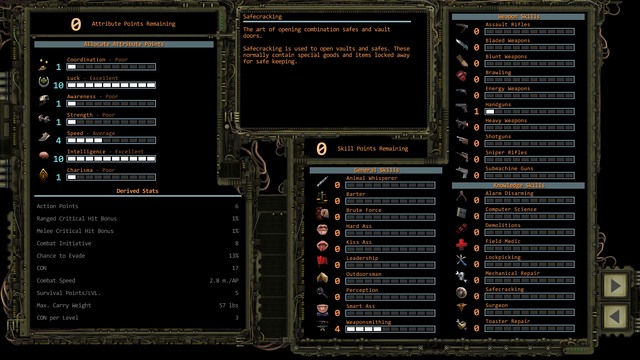 As you start creating your character, you will get to see the skills and attributes window. Attributes are the innate properties, such as Intelligence or Luck. Generally, they are set values that are rarely changed, but you will receive one point to distribute every ten levels. In practical terms, they remain unchanged, although there are ways to raise them (e.g. gadgets). Skills are, on the other hand, knowledge obtained in certain fields, which you can raise while leveling up. Both are defined by means of numbers ranging from 1-10, where 10 is the maximum. A new character gets 7 attribute points and 12 survival points to distribute. To find detailed information on that, see the next chapter.

A new character starts with each attribute at the level of 3 - average. Each value above the average costs you 1 point more, i.e. 4 Strength requires you to spend 1 point, 5 requires 2 points and 10 requires 7 points. Since you have 7 attribute points to distribute, you can max out on one attribute only. Still, we do not recommend doing that at the beginning, unless you really know what you are doing. The only, quite unusual, but occasionally effective in this system is t o create a character with Charisma at 10 and conversational skills (e.g. Kick-Ass). A character like that is going to be a ball and chain in combat, and everyone will have to watch out for such a character, until he gains really high experience level. Still, nobody will have any secrets from that character in conversation and it will be easier for such character to gain successive experience levels. A similar option is Luck at 10, which may result in a very strange game - sometimes hilarious, sometimes immensely annoying. These suggestions, however, are for the second, or third completing of the game - you should really stay away from them the first time around the unforgiving wasteland. The attributes can also be brought down, below 3. You will then receive additional points (1 for dropping to 2, 2 for dropping to 1) but in most cases, dropping below 3 is not going to be a good idea.

A new character does not have any initial skills so, everything is up to you. Skills are divided into passive (that are permanently active) and active (you need to have the character use them). Their cost is calculated differently than in the case of attributes. The first three levels cost 2, 4 and 6 points, respectively. Then, their cost raises by 4 points, at levels 4-6 (10, 14, 18) and by 6 points at levels 7-9 (24, 30, 36). The final, 10th. level costs additional 8 points (44). Skills are rather independent of attributes, but there are slight interdependencies between them. Fir example, characters with low Strength cannot achieve the 10th. level of the Brute Force skill, but the effectiveness itself (a percentage chance of success) of this skill, at the level of, say, 4. is going to be the same, regardless of the level of Strength.

The reflection of your choices appears in the statistics window - in the bottom left corner of the screen. Once you have distributed all of the points, you will be able to specify the looks of your character, and traits of character, in the next window: age, religion, origin and which cigarettes they smoke. Of course, these are typical RPG elements, which do not translate into the game itself. After you have created your party, you can be on your way.

How to distribute points properly?

How not to get lost in this multitude of possibilities and create a good character? There is no single answer to this question. The beauty of Wasteland 2 is this multitude of options and freedom of choice. Everyone can do well, if only you put them to good use. The important thing, however, is not to overdo and not to create universal soldiers that are good for everything. Your character should develop in a, possibly, balanced way, with greater emphasis on what is going to be the most useful. Is he going to fight in melee, he needs strength. Do you want him to use heavy gear? He needs coordination, which results in greater number of action points. Intelligence is of use to everybody, as it sets the number of points that you can spend on abilities after every promotion and this appears to be the most important element of character development. Remember also that you will obtain an additional point once every 10 levels, so you should think ahead and, for example, gain 1 AP more by increasing your Speed value on level 10.

The same goes for skills - being universal is not a good solution. Three or three skills, which are well-developed work better than seven at level 2. You can stick with the key, according to which each character has 2 practical skills (like, e.g. safe-cracking) and one connected with the primary weapon - all of them developed at the same level. Then, the secondary weapon (probably melee weapons) that is going to be developed in the second place, in relation to the first three. After you reach level 10, or 15, it is a good idea to start developing the another skill. Skills should be developed rather regularly and rather fast to prevent a situation in which you lack one or two points for opening some passage. Notice that even the highest level doesn't mean that all your problems are gone. In the second part of the game, in California, it may so happen that the chances of opening some difficult lock are only 35%, even with Safecracking skill on level 10. At the end of the game, in Arizona, try to obtain at least level 8 in all the key skills, like Safecracking, Computer science and Lockpicking. How fast you earn ability points depends on how much Intelligence you have. You will earn additional points when visiting special statues, spread around the wastelands.

If you could do with a skill that you do not have, think in the first place of recruiting new party members/ Maybe you have left behind someone, who wanted to join your party, in the previous location? Maybe they have what you need? But, if there is nobody handy around, do not hesitate to add 1 or 2 points, until you find the character that can be really well taught in that area. The situation is similar when you find a good weapon that nobody knows how to use well. Additionally, make sure that you have enough ammo for this weapon (or whether you can afford to buy it) and whether it is good enough to justify wasting survival points. A sudden changing of specialization is wasting points that you have already invested into another weapon. And maybe you are going to find a handgun, at a shop, with comparable damage factor, whose using you are already specialized in? While selecting starting skills, avoid heavy weapons and energy weapons. In the initial stages of the game, you will not find the gear that requires them.