On this page of our guide to Warcraft 3 Reforged you will find a detailed walkthrough of Under the Burning Sky mission. The last mission of the Undead is not the easiest one, because you will have to defend yourself for 30 minutes from the continuous attacks of human army. 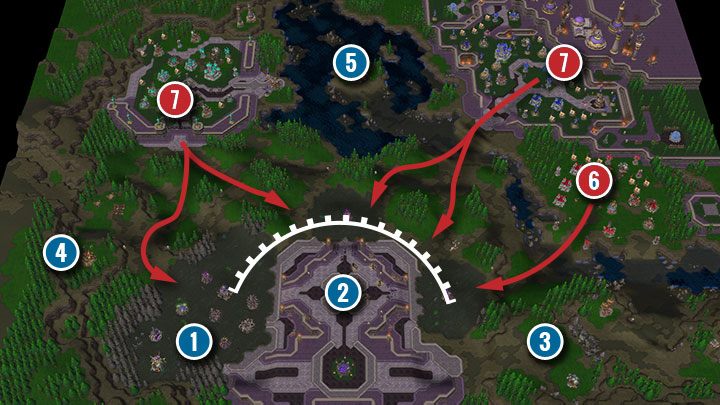 You start the mission at the bottom of the map (1), while Kel'Thuzad is in the middle of the map (2). Your mine has so much gold that I'll run out just before the mission ends. However, you need more gold to train and expand your army. So, capture the empty mine east of your position (3). This way, you can considerably accelerate the collection of gold. Your target economy should consist of 10 Acolytes working in the mine and 5 Ghouls collecting lumber. With the surplus of lumber, you can send your Ghouls into battle.

Near your base, at the left edge of the map, you will find Goblin chests with mines, which you set on the map (4). There will also be a goblin laboratory there. In the center of the map there is a secluded island where a lonely Archmage (5) is located. You can defeat him with the initial troops to get an extra item for Arthas. The artifacts that Lich King had in his previous mission can be found near his position (2).

There are three large enemy bases on the map, which are almost impossible to reach due to the small amount of time and strong fortifications (6,7). Each base specializes in a different type of troops. From the base in the east, teams consisting of Footmen, Knights, Priests and Sorcerers (6) will arrive and invade your base. Light blue will send out dwarven Riflemen, Siege Machines and Mortar teams. The blue player, uses battle groups made up of Footmen, Knights and Gryphon Riders (7).

For the first 20-25 minutes, most groups of the invaders will consist of just a few units. At the end of the mission, waves of enemies will be more significant. Most of the time, a group consisting of Arthas, 5 Ghouls (then exchange them for Abominations) and 6 Crypt Fiends is enough. Later, it's worth strengthening the armies with a second similar group: 4 Abominations, 4 Crypt Fiends, 4 flying or supporting units. At the end of the mission, increase your army to the maximum food limit (maximum upkeep).

Towers should repel the enemy most of the time and slow down enemies during the last attack.

The basis of your defense against the final attack is a line of towers in front of each of the three ramps leading to The Lich King. Throughout the mission, focus on expanding the towers at each ramp, especially at the north and west. The towers will not defeat their enemies, but can effectively slow their offensive. The computer player will want to destroy each tower one by one, and that can give you more time to assemble the defense of The Lich King.

Destroying the human base is very difficult to complete, but at the same time it is a profitable challenge. During the last assault carried out by human troops, you will fight against one army less.

If you feel strong economically and militarily, and have more than 20 minutes to complete the mission, then you can try to eliminate the base in the east (6). This is the weakest outpost of all three human bases - with the right army and tactics you can easily destroy this settlement. Once this base has been eliminated, you don't have to be afraid of the attacks from the eastern side.

You must train approximately 3-4 Meat Wagons that will destroy enemy towers and production buildings. It is important to eliminate the workers who will be constantly constructing new production buildings and towers. Archmage, Priests and Sorcerers will cause you most problems. The Death Coil should remove supportive units with a single cast. Be sure to use Arthas ultimate ability and use the Resurrection when your Abominations or enemy Knights will be defeated. Then you will receive strong support - let animated enemies attack units near the towers.

Don't forget to demolish the City Hall. Eliminate all workers, as the computer AI will try to rebuild its base. Monitor the minimap - if you notice that another Human army is going to help allied forces, it's worth retreating to your tower defensive line and continue the siege after repulsing the attack of the Human army.

At the end of the mission, Human forces will gather a mighty army. They will use it for the final assault on The Lich King's position.

The last wave of enemies is too great to defeat. When there are 1-2 minutes left to complete the mission, the enemy will attack on all fronts using a powerful army. If you've managed to eliminate an enemy base, then their army won't attack. If you have created a network of towers, Ziggurats, and Necropolis, then the enemy will focus its attack on the buildings. As long as Humans are attacking your buildings, keep your army away from the enemy. That way you can slow down their inevitable march to The Lich King. Keep your troops close to him to keep your enemies away from physical contact with Kel'Thuzad. A large group of Crypt Fiends is necessary to stop the flying units. Arthas should remain near The Lich King because only The Fallen Prince has an ability to heal him. When the time is up, the mission will be successful.