On this page of our guide to Warcraft 3 Reforged guide, you find a detailed walkthrough of Trudging Through the Ashes mission. This is the first mission of the Undead campaign, in which you will follow the fate of Arthas and the role of The Cult of the Damned. 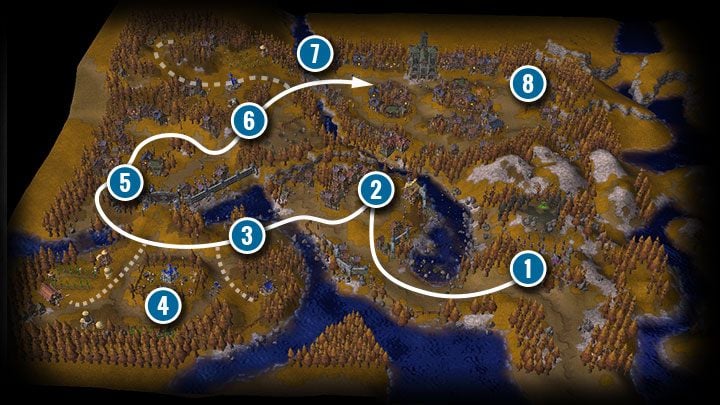 Prince Arthas was twisted by the ancient magic of The Lich King and becomes an antagonist of human forces. The story of evil Arthas begins with the restoration of the Cult of the Damned. Acolytes are hidden among the loyal people and townsfolk. You have to sneak around and find them in the surrounding villages and towns, while keeping an eye on local human guards. After Arthas gets near the appropriate citizen, he or she will turn into an Acolyte and get teleported to the dark lord (1) - this is also where the mission begins.

Arthas has to approach the hidden Acolytes. By doing so, Acolytes will join the Cult of the Damned. Some chests contain useful items for Arthas.

The main ability of Arthas as a Death Knight is an equivalent of Holy Light - the skill works in a very similar way. By using the Death Coil you can damage an enemy living unit or heal a friendly Undead unit. Another skill, called Death Pact, kills a selected friendly unit, giving a percentage of its hit points to Arthas. Use this spell on summoned skeletons.

You will receive Ghouls at your disposal, who are the basic combat units of the Undead. They can use the Cannibalize skill, which allows them to regain health points by consuming dead corpses. The Undead rely heavily on the corpses of killed allies and enemies. Also remember to destroy all chests. You may often find some a useful item for your hero. In the village, you will find first Acolytes (2), but the citizens will flee to the nearest Footmen in order to alert them.

The Shade is a reconnaissance unit that cannot attack, but is invisible to most enemies. Also, Shades can detect invisible or hidden enemies.

After clearing the first village, you will come across a new unit (3) and get additional information about the nearby cemetery. There are enemy barracks ahead of you (4). The enemy has no possibility to train additional units, but there are numerous enemy patrols around this building. Use Shade to observe what's going on and bypass enemy units at the right time in order to "liberate" Acolytes located around the Barracks. Next, approach the western gate of the city (5). 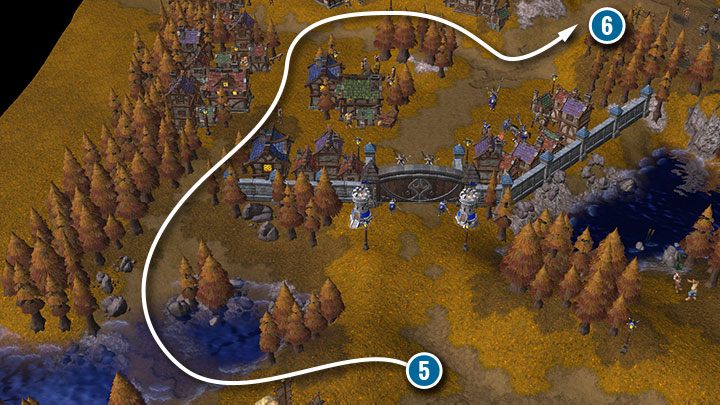 Instead of fighting the guards of the gate, it's worth sneaking into the city through a hidden passage to the west of the gate.

Instead of confronting the guards, head along the river to the left end of the map (5). You will find a small passage that leads into the city. Get rid of every citizen before he or she alerts the guards at the gate and proceed to the cemetery grounds (6) to complete the secondary objective - you will receive additional reinforcements.

In the north, you will come across a closed gate (7) - don't break through the city gate yet. Head west until you reach the Town Hall. Peasants will be alarmed and turn into Militia units. You will encounter more Acolytes here. In the upper-right corner there are bandits who are imprisoning another cultist and can drop a useful item for Arthas.

The final group of cultists is imprisoned in the eastern part of the third city.

It's time to enter the main city on this map (7). After the gate is destroyed, begin to explore the streets in search of cultists. Fight only against small groups of enemies and avoid situations where you continue to explore the city with enemies at your back. Most of the cultists are imprisoned in the eastern part of the city (8). If you still don't have the required number of rescued Acolytes, then move back and search every corner of the map, but you should find 18 cultists to this point.