In this chapter of our guide to Warcraft 3 Reforged we have prepared a detailed walkthrough of The Shores of Northrend mission. Arthas sets off to search for Mal'Ganis to avenge his people. 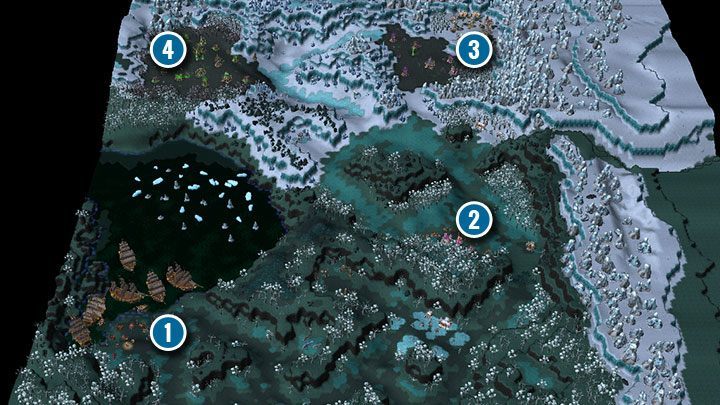 The frosty shores of the northern island are not very friendly, but the mission turns out to be relatively simple at normal difficulty level. In the beginning, you will start the mission right next to the ships (1), and your goal is to find a good place to build a base. Move your team to the east and follow the forest path. You can't get lost here because the road leads to the same place anyway.

On the way you'll encounter wolves and trolls. They stick in small groups and do not pose a major challenge. Move slowly because you have no time limit in this part of the mission. Your workers near the ships are safe until the next stage of the mission. There won't be any battle between Human and Undead races until you find the right spot to build your base.

The base of allies that you will encounter is not in a very good condition. It is worthwhile to quickly help the dwarven outpost in the north to get a better base and additional units.

You'll quickly come across an allied base that's under siege (2). Muradin is the current commander of this outpost, but he will quickly hand over the command of his base to Arthas. The new hero is an extremely effective warrior. His first skill is extremely useful. He can throw a hammer that will deal damage and stun an enemy for a few seconds. An ideal ability against powerful opponents and enemy heroes. It also has little chance of stunning the enemy during an attack.

The base itself is in poor condition. There are no defenders and some of the buildings are on fire. Start by training Peasants and repairing the remaining buildings. You can slowly expand your base, or train a few soldiers and set off to help the dwarves as soon as possible (3). Along the way you may encounter the first of two Undead bases available on this map. The purple opponent can be quite easily defeated with even one 12-unit army. Granting help to your dwarf allies will make them join you with the whole base, which is quite well developed. By the way, you will gain an additional mine and access to a new unit.

The flying machine is used primarily for reconnaissance and fighting against enemy air units. Once upgraded, it can attack ground targets.

Before attacking Mal'Ganis' base, increase your army to a minimum of two squads, with a total of 24 units. In the first team add melee units, like Footmen and/or Knights, and some ranged troops like Riflemen and Flying Machines. The second squad should consist of Priests, Sorcerers and 2-6 Mortar teams. With such an army, you are able to destroy the enemy without any major problem, although the Undead base west of the dwarven base is quite large (4).

The Mortar teams have a greater range than enemy watch towers and will deal additional damage to all fortifications and buildings of the enemy.

As you approach the base, the enemy will send all units into battle with your troops. The first team has to eliminate the garrison. Let the Sorceress slow down strong enemies, especially the Abominations. Priests should heal soldiers and use Dispel on Skeletons. If you start losing many soldiers, you can retreat or wait for at least 6 units to die. Then use Arthas' special ability - Resurrection. Soldiers will return to the battlefield, which can often provide you a higher chance for a victory. Let Muradin stun the Necromancers, Abominations or the enemy hero with his hammer.

After defeating the first wave of enemies, start destroying the production buildings if they are within range of the Mortar teams. Otherwise, destroy the nearest towers that pose a danger to your Mortar teams. The enemy will be training troops all the time, and has a large number of production buildings in his base. Arthas' team will provide protection for the dwarves, so don't go too deep into the base until you destroy most of the towers. You will achieve victory when you burn to the ground all of enemy buildings (not including the enemy towers).