This section of our guide to Warcraft III Reforged contains a detailed walkthrough of March of the Scourge. The heroes arrive to plague-infested areas. The residents are infected and the area is swarming with undead forces. You have to hold on your position until the arrival of reinforcements. 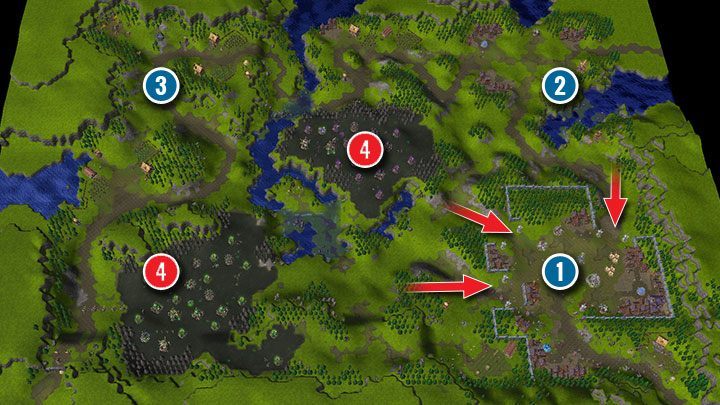 The defense of Hearthglen's is not an easy task - the enemy will attack from all sides.

You start your mission in the village, in the lower right corner of the map (1). If you order Arthas' to move towards the tavern located south of the base, you'll receive some Footmen. Together with the initial troops, this group will be able to handle all enemies for the first 10 minutes. Focus on expanding your base - build additional Barracks and other production buildings. The Riflemen and the Mortar teams will be very useful. The village is surrounded by walls and dense forest. Use this advantage to attack enemies from a distance. From this mission, Jaina will no longer fight alongside Arthas. You'll find all her items next to the Town Hall. 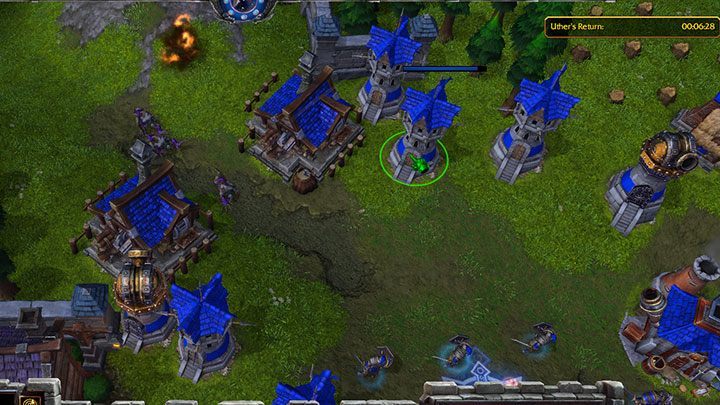 Building a narrow entrance to your base will make defense much easier. This way, you won't be fighting a whole bunch of opponents. Place the watch towers right behind the defensive line, so they can strike enemies from a safe position.

The undead will approach from 3 sides: west, north-west and north. In the center of the map and to the west there are strongly fortified bases of the Undead (4). It is worth strengthening your territory with a few additional towers at each entrance to the town. At first, simply construct many Scout Towers, but remember to upgrade them to Guard Towers later. It is not worth building them in a compact area, because at the end of the mission, the Undead will use catapults that have an AoE attack - these units can easily demolish even several buildings at once.

You can build pseudo-walls by using other buildings, such as Farms or Lumber Mills. Production buildings are not suitable for this purpose because they cannot be built near each other. There should always have some room for newly created units. After building the Blacksmith you will gain access to a new type of towers armed with cannons. They have an AoE attack, so they can attack several smaller units that are concentrated in a group. Therefore, Cannon Towers are perfect for fighting Ghouls and Skeletons. The greatest disadvantage of such a defensive tactic is the inability to fight against catapults and necromancers. You have to create and use your mobile group to lead counter-attacks in such situations. 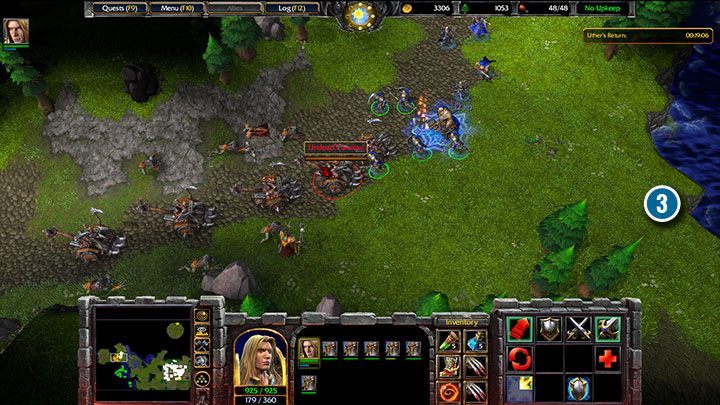 Destroying a grain caravan is an optional task, but if you allow your enemy to set up a new base, then Undead attacks on your base will become more frequent.

At the top of the map, north of your base, there is an unoccupied gold mine (2). It is not defended, but it will be the enemy's target. An additional task to destroy the poisoned grain caravan will appear about 20 minutes before Uther arrives (3). It is worth destroying this Caravan because it will attack your further expansion and the Undead forces can build their base there - from which they may send out more groups of soldiers.

The caravan will first head towards the village, at the top right corner of the map, and then stick to the northern path, at the edge of the map. Your target are the meat carts. Those catapults that also carry the bodies of fallen soldiers. A Necromancer can summon Skeletons from the carts. It's worth taking care of them first, and then destroy the carts. It is worth noting that meat catapults are mechanical units, not Undead ones. The Holy Light cannot be used on such units.

Once you've destroyed the Caravan, it's worth taking a look at the top-left corner of the map. There is a small group of Ogres with their leader. They not only can provide a lot of experience points for Arthas, but also drop some interesting items. 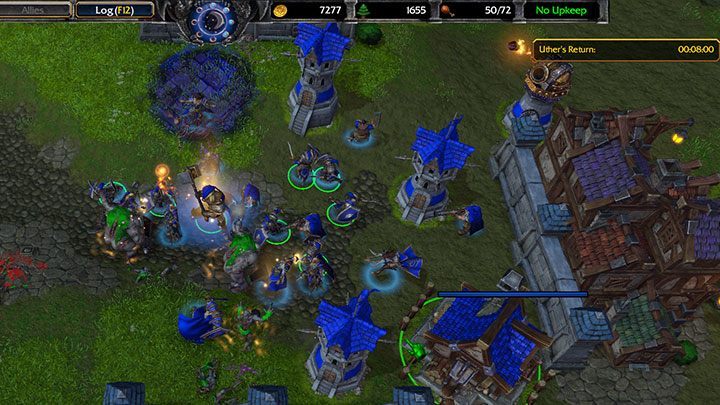 A strong defense in the form of scout towers and a group of soldiers together with Arthas will allow you to survive to the end of the mission.

In the last minutes of the mission, the attacks will intensify. More and even larger groups of enemy forces will arrive. In addition to Ghouls and Necromancers, Abominations and Undead catapults will join the battle. That's why you need to have at least one 12-unit team to fight off the incoming stronger assaults. It's worth having at least 2-3 priests to quickly cure your units between attack waves. Sorcerers have the ability to Slow enemy forces - it's worthwhile to manually cast this spell on Abominations and keep them at a distance while towers and ranged units can attack the opponent. The most important thing is to ensure that most of your base, including the Town Hall, is still standing in one piece at the end of the time limit. Don't be afraid to sacrifice part of the base to survive until the reinforcements arrive.