On this page of our guide to Warcraft 3 Reforged, you will find a detailed walkthrough of The Cult Of The Damned. Arthas and Jaina want to investigate what the Cult of the Damned is and what is its purpose. You'll have to take part in regular battles with undead forces. 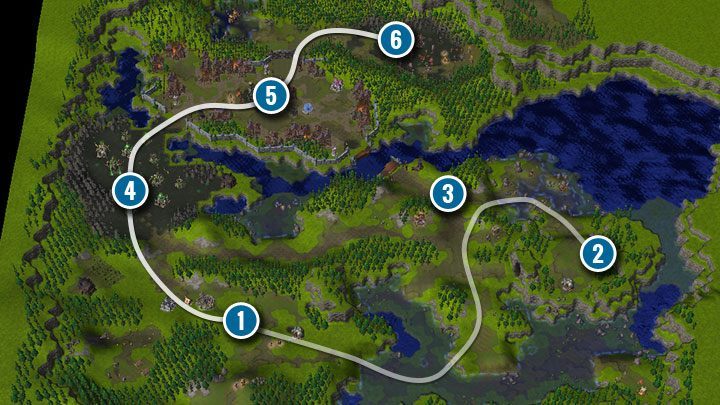 In this mission, you will have to expand your base and fight against the undead. The Arthas post is located at the bottom of the map (1). You can explore the area - there are numerous groups of Murlocs, Trolls and Golems in the west. The latter group is guarding the gold mine in the eastern part of the map (2). When fighting this enemy, you must remember that they are resistant to spells and magic. That's why the strength and overall power of your soldiers counts, although you can still use the water elemental to fight the Golem. There is also a goblin store (3) in the area where you can sell and buy items for your heroes.

The basis of each mission is to strengthen the economy and establish a lot of productive potential. In other words you have to build lots of structures which may ensure a high unit growth and increase the production rate of new units. After defending your base, you can start attacking Undead forces.

At the beginning you will receive a large economic back-up offered by the objects on the map (1). You already have a group of Peasants, Barracks and Farms. It is worth to build more Farms and a Lumber Mill closer to the forest. This will speed up the collection of wood from the surrounding forests. Build towers at the west end of your base. Small groups of undead will be approaching from this side.

The next step may be to build additional Barracks and a Blacksmith. Not only will you speed up the training of your troops, but you can also be able to build the Workshop and the Arcane Sanctum. Form a group of Arthas, Jaina, 5 Footmen and 5 Riflemen. This will be your basic strike team. You can also create a second group, which will consist of Priests and Mortar teams. The former will heal your soldiers, and the dwarves are perfect in destroying enemy buildings. 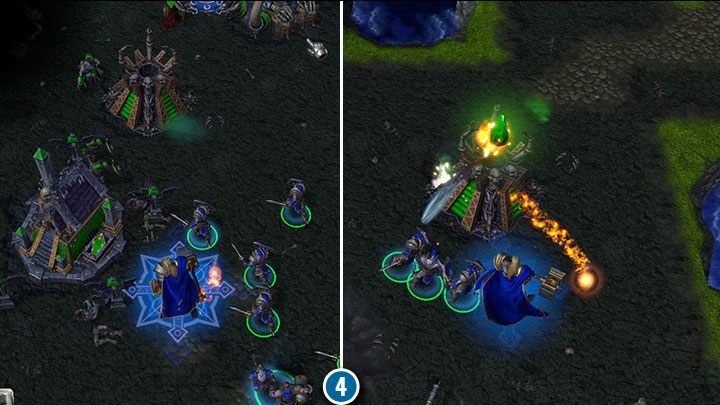 When assaulting an enemy base, first get rid of your enemies and then destroy the enemy towers. Then focus on the production buildings and the Acolytes.

Time to attack! The Undead Base is near your base, to the northwest (4). You'll quickly recognize the land of the undead by the defiled land. Undead forces can expand and build their bases only on such type of terrain. Remember about a few things during the attack.

Get rid of the necromancers first. They have a special building nearby, the Cemetery, which has numerous corpses. Enemy sorcerers don't have to kill your soldiers or wait for their units to get defeated. From the beginning of the battle, they will be summoning Skeletons, which can make it very difficult to win this battle. Once you get rid of all enemy units at the base, focus on destroying enemy towers and buildings that train soldiers. Only at the end wipe out the Acolytes and destroy the remaining buildings.

Now it is time to investigate Andorhal (2). The city is contaminated, defiled and plundered - the residents of the city are dead or infected. After a short animation, you must wipe out the Undead in the city and destroy the grain warehouses. These enemies will be skeletons or Ghouls, and it's easier to fight them than to destroy the Undead base. There is also a cage in the city - make an order to attack it. A neutral Ghoul named Timmy, who you rescued during your first mission, will appear. If you kill him, you will receive a special ring that strengthens all attributes of the hero. 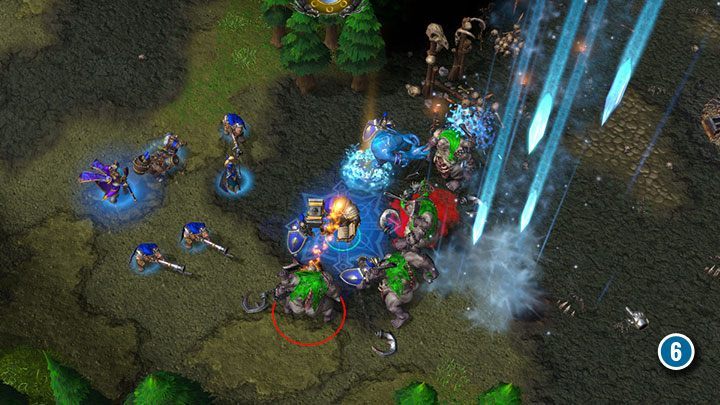 Abominations are heavy opponents, but use all available tricks to defeat them. Use the Mortar teams or cast a Blizzard at a group of opponents.

The final stage of the mission is the battle with Kel'Thuzad and his soldiers (6). When you leave Andorhal, you'll encounter some Ghouls and another goblin store. It's worth to prepare for the next battle, because it won't be an easy one.

In the Necromancer's hiding place, there'll be a cluster of Abominations. Attack each Abomination one by one, or the battle may prolong with a mediocre result for your troops. Use the Priests to heal your soldiers, and let Arthas to use the Holy Light in order to accelerate the elimination of Abominations. Let Jaina first summon the Water Elemental and then throw a Blizzard at the enemy group.