Thrall and his warriors were seized by the natives. Murloc wants to kill all prisoners as a sacrifice, but Thrall quickly manages to escape the prison...

You start the game with one Troll warrior, but you'll get extra troops quickly. Remember that Thrall can summon wolves that will fight with you for a certain time. It is worth using this option in the first minutes of the game until you release more soldiers. Destroy all chests as well, because they often contain useful items and potions. Sometimes an enemy skeleton jumps out of them, but in most cases they hide something useful. Most of the enemies are small Murlocs, which are not much of a challenge during the first part of the map. 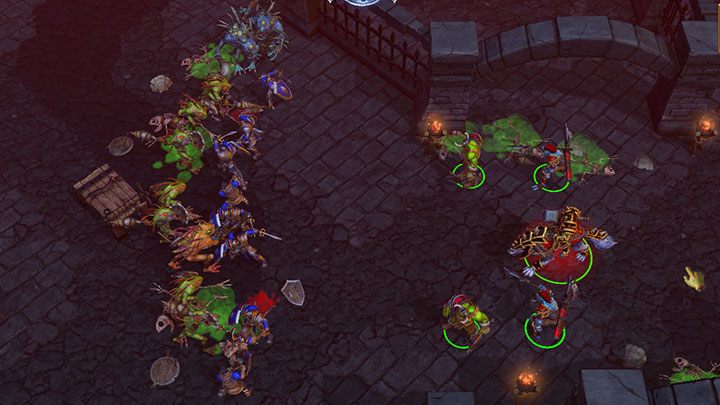 Where two dogs fight for a bone, the third one gets away with it - wait until one side starts to gain the advantage and start helping the weaker faction to defeat both groups of opponents.

After rescuing a few warriors, you'll end up in the greater part of the prison where humans are being held. All imprisoned people will run away from their cells and start fighting the Murlocs. There's going to be a large battle between the two groups. Hold your attack and keep your troops at a distance! You can bypass the battle and move on, but it's better to wait a while and start attacking the soldiers of this faction that is gaining the advantage. That way you can secure the back and search this room. 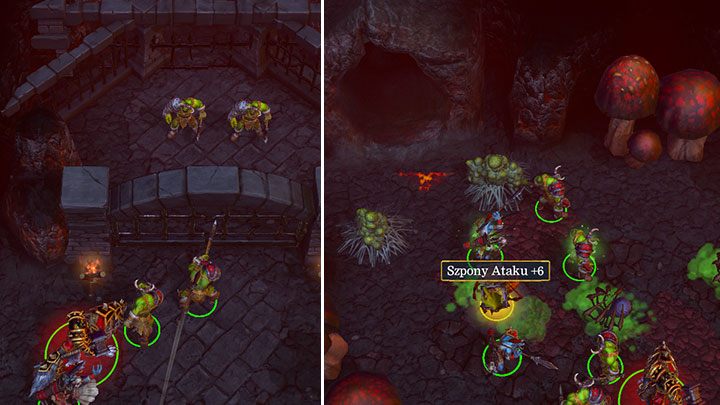 Release all prisoners, so you have better chances in the final battle. In a room with spiders you have a chance to get useful items.

Soon you'll reach another cell where there are two Grunts. Now get ready to fight against the spiders among the depths of underground pathways. After you defeat the spiders, attack their lair. More spiders will spawn, but you can also get Claws of Attack, which add 6 points of damage to your attack. Thrall will gain more strength by using this artifact. In a room with several caves, more spiders will jump out - quickly defeat your enemies and move on so that no more enemies may appear.

In the next cell a shaman with a new Bloodlust skill will join your forces. This is one of the best skills available in the Orcs faction, because it strengthens each unit by accelerating the attack and movement speed. The shaman can cast this spell automatically during the fight, or you can choose on which particular units he should cast this spell. It's worth turning it off during easy battles and save mana for more difficult encounters. 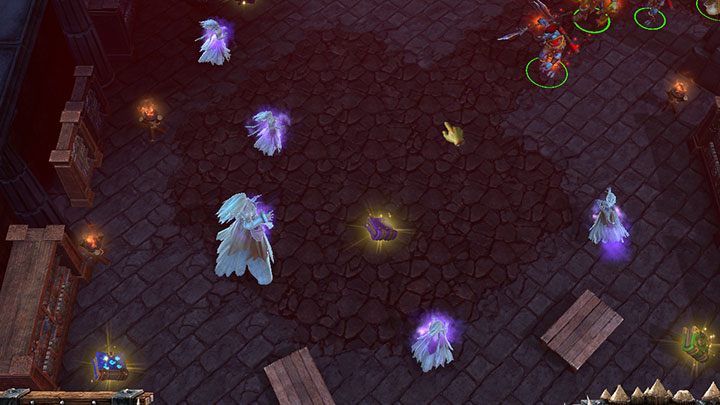 When you reach the bottom left corner of the map, you will meet the spirits who guard the library. You can skip this place, but after defeating all enemies Thrall will be able to collect as many as 5 different tomes, which can strengthen his attributes and stats. The books and tomes are extremely useful to every hero and it's always worth using them for the main character of the campaign. They don't take any free space in the inventory and permanently increase the hero's statistics throughout the campaign.

Defeat the little Murlocs as quickly as possible to attack the guards that hold the barrier.

Now it's the time for a final battle of this mission, which may seem difficult and chaotic, but if you have freed all the prisoners, you shouldn't have any major problems. The battle is divided into two stages. In the first stage, you must defeat a large group of ordinary Murlocs and Guards who will slow down your soldiers. Use Lightning spell to quickly get rid of the little Murlocs. Let the shamans strengthen themselves, the Thrall and the Trolls, to make better use of ranged attacks when most of your troops will be nested in a narrow pass.

Then it's time to fight the Murloc's Sorcerer. First of all, defeat his vanguards - attack little Murlocs with Lightning spell and wait until they approach your soldiers. Now use your entire army to attack the enemy. Use potions and healing signs to keep as many of your warriors alive as possible. Murloc Sorcerer's death means the end of the mission.