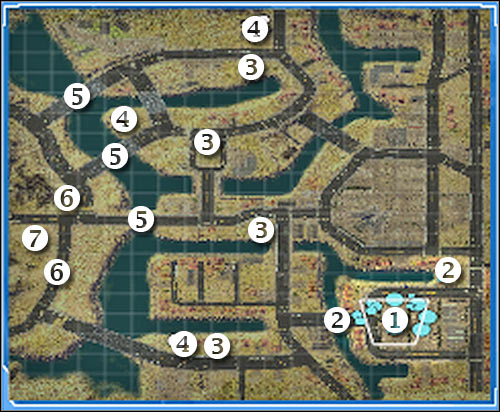 2 - main roads leading to your base

You will have to start the mission by constructing several important buildings. This will allow you to acquire necessary upgrades, as well as better units. After that, you will have to rescue several groups of pinned gunships by destroying nearby hostiles and turrets. The final part of the mission will require you to take down two enemy Walkers and to escort Mirabel to the Material Uplink building.

First objective: Build a Science Center and an Aircraft Assembly

This isn't going to be a difficult mission, mostly because your enemy won't bother you with any powerful attacks. You will only be attacked when you've succeeded with one of the main objectives of the mission. This means you will have an unlimited amount of time to prepare your army. You should also know that your enemy doesn't have any bases and he won't attack you directly with its Walkers. You'll start the mission in the lower right corner of the map. This isn't a good spot, because your base is fully exposed to enemy fire. Thankfully, you may ignore the upper road. Move your units to the western exit, so they'll position themselves near the bridge. You should also place manufactured units there. Take your time to familiarize yourself with your units. You should also choose one of the available patches from the lower menu. I would recommend upgrading a Robotic Assembly building. This will allow you to recruit stronger Blade units (screen), however you shouldn't drop the idea of manufacturing Ohm Robots. They're also quite good. Build a few units, however you won't need a large army at the moment. 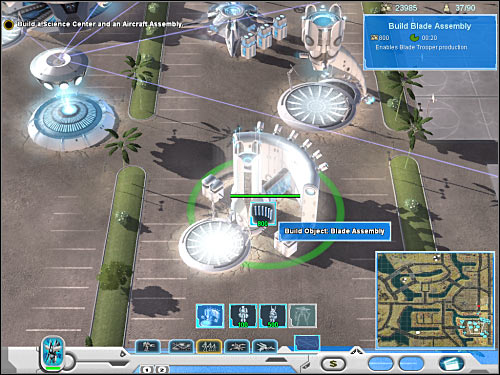 As you've probably noticed, you already have a Recycling Center building, as well as Vehicle Assembly. You might want to consider building a few Antimatter Tanks right now. If you choose to manufacture them, place them near the western bridge. You should also construct a second Recycling Center in order to be able to gather more resources. As for your power grid, you should build more towers on the island where you base have been set up. This will allow you to arrange locations of defense towers and buildings more freely. I wouldn't recommend expanding the grid to the north or to the west, because your Constructors would encounter heavy resistance. Once you're ready, start placing necessary building - a Science Center and an Aircraft Assembly. I'd strongly recommend that you place them somewhere near the southern edge of the map (screen). You can choose your newly purchased Aircraft Assembly building. Click on a Dervish Assembly upgrade. This will allow you to build Dervish aircrafts in the future and you'll need them to defend your base and to attack some of the enemy positions. You can also take control over the northern Military Laser Turret. There's a grey icon hovering over it, so you shoudln't have any problems finding it. 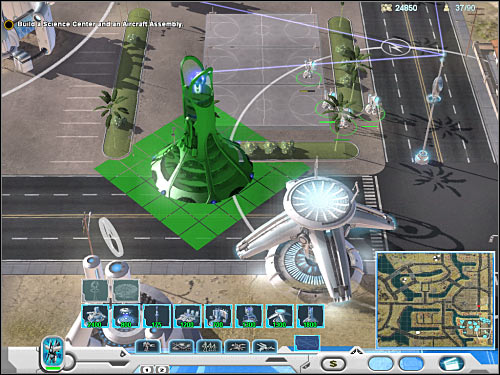 I wouldn't recommend waiting for the conversation to end. You should act right away, because enemy saucers, as well as a monolith are heading your way. You will also have to deal with similar problems in the future. As a result, you must buy a newly acquired object. It's going to be a Redirection Turret. You will have to purchase a lot of these objects. Start placing them to the west and to the north-west of your buildings. Thankfully, you won't have to worry about anything else, so may even buy 10-15 of them. Remember that more turrets will allow you to increase your chances of destroying every air unit which appears near your base. Use your Dervish aircrafts if you weren't able to construct the first turret before enemy units have arrived. Thankfully, you won't have to worry about any other attacks, so you may proceed with building new turrets. 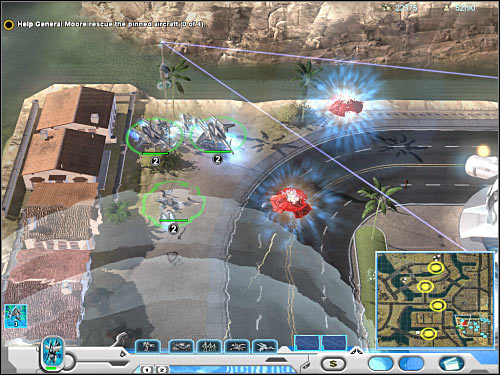 You will have to reach the maximum population cap by building an army. I would also recommend increasing the number of purchased Dervish aircrafts to 5-6 units. As for your ground units, you should manufacture Ohm Robots, as well as a few Blade Troopers. You should also allow Mirabel to take part in some of the upcoming battles. You may leave the base undefended, mostly because your enemy will only use flying saucers and monoliths to attack you and you probably have a lot of turrets at your disposal. Start off by moving towards the southern helicopters (3 on the map). I would recommending sending your Dervish units to the west, because they'll be able to attack some of the Hierarchy units without risking being shot down (screen). It's very important that your aircraft stay away from the main targets, because there are gravitic turrets there. Once you've secured the road leading to the first target, order your main army to cross the bridge. Obviously they will be moving west. 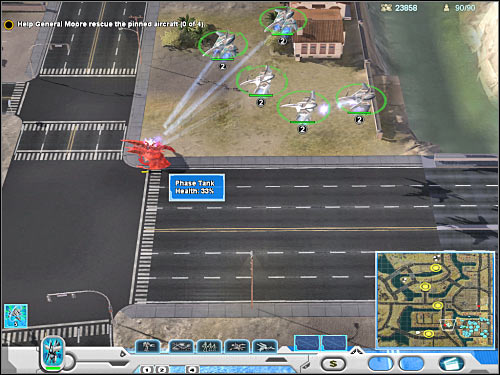 Order your main army to start moving towards the first (southern) target. Once you've arrived at your destination, you will have to neutralize several enemy units. Make sure that you've destroyed gravitic turrets in the first place, because this will allow your Dervish units to get here in order to assist ground forces. You will have to neutralize all Hierarchy units. You'll probably notice that allied helicopters automatically take off. They will return to your base. Order your Dervish units to go back there as well, because you are going to be attacked by new saucers and monoliths. If you've constructed a lot of turrets, you won't have to worry about these units damaging your main structures. Just make sure that you've repaired the turrets once the air units have been destroyed. 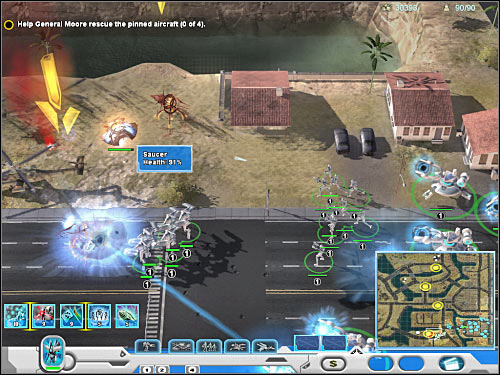