Important! Before you decide to take any actions, save your current progress and exit the game. Go back to the main menu and choose Tutorials. I'd strongly recommend that you see all three movies. Global Mode - Basic Controls will teach you how to operate on a global map and how to understand the differences between three playable factions. Global Mode - Command Structures will tell you more about building global structures and upgrading them with available components. Global Mode - Heroes & Strike Forces can teach you how to create strike forces and how to move them on a global map.

You were able to see the global map before, but this is the first time you actually have to do something in order to proceed with the campaign. Take your time to familiarize yourself with the controls. You should also take a look at visible objects and zones. Your primary objective for this campaign will be to reach Anahuac sector which can be found in North America. Don't expect to get there right away. You will have to take part in several optional missions along the way in order to take away certain territories from Hierarchy control. You start off in East Africa, near two hostile territories (Congo & Sahara). This will change once you've progressed in the campaign. You should also notice that you already have one global building at your disposal. It's the main headquarters of the Masari organization. Obviously you will be allowed to upgrade this building using various types of components. These components will change depending on the type of a global building you want to upgrade. As for HQ, I would recommend purchasing Basic Defense in order to ensure the safety of this structure. The second component is less important here. You can consider buying Repair in order to be able to heal your strike forces. The next big step is to prepare a hero and its army. Armies are called strike forces here. Obviously you will be allowed to participate in battles without using any additional units, however it's best to go in prepared. This is very important, because most of these side missions are quite difficult and it'll be much easier to defeat your opponent if you already have a small army at your disposal. Try reaching the maximum population limit for the current strike force before proceeding with the first assault. As for lord Charos (he will be your main character for the next few missions), his population limit is set to 50 points. I would recommend purchasing Conqueror and Inquisitor units. Conqueror tanks will allow you to repel ground attacks and Inquisitior units will prevent your enemy from using flying saucers in order to destroy your buildings. You'll need them at the start of each mission, because you won't be allowed to construct Sky Guardian turrets right away. 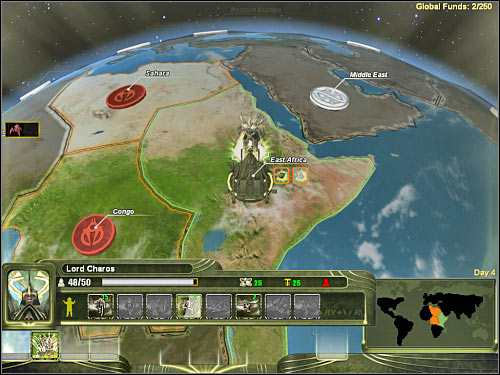 Like I've already said, your first step will be to attack one of the nearby territories. You will be allowed to choose between Congo and Sahara. It doesn't really matter which one you'll decide to attack. Don't worry that you won't receive any specific objectives once you've arrived at your destination. Your only goal will be to destroy all enemy forces in order to take full control over the sector. This will also occur during other missions. You will be allowed to choose a landing zone by sending your ship wherever you want to. You can also choose to retreat by selecting a certain option from the main menu. Obviously I wouldn't recommend doing that. If you plan your moves carefully, you won't spend more than 30 minutes on each map.