This unofficial guide to Uncharted 4 A Thief's End contains all the information necessary to complete the game 100 percent and get the platinum trophy. The main part of our guide is the very detailed walkthrough for all chapters of the game, which includes, among other things, hints on how to avoid or eliminate opponents (including bosses), information about the best routes to a mission's objectives, and detailed solutions of more complex puzzles. The guide is enriched with high-quality images on which we have marked e.g. places where you have to jump or shelves to reach.

A large part of the guide is devoted to the secrets/collectibles section, which presents the exact locations of all 109 treasures. The Secrets chapter also contains locations of journal entries, notes and optional conversations. In addition, we have also included solutions to the most difficult puzzles and information on how to obtain rare weapons.

The last major chapter is the trophy guide, in which we explain in detail how to unlock 100% of the trophies and how to get the platinum one. Each trophy found in Uncharted 4 has a detailed description. More complex trophies are further discussed on the separate pages of the trophy guide.

Uncharted 4 A Thief's End is the next installment of the hugely popular series of action-adventure games, in which we follow adventurer Nathan Drake. His brother Sam also plays a significant role in the game, appearing in many stages and cut-scenes. The gameplay mechanics have not changed much compared to previous parts of the series, although there are certain moments where we have more freedom. Sometimes we also have to make decisions that affect the further course of the campaign (their consequences are discussed in the guide, of course).

Note - The walkthrough is based on Crushing, the highest difficulty level available. If you play on an easier difficulty level, some of the scenes discussed in the guide may be easier to complete (fewer opponents, a greater margin of error, etc.).

Below are some quick starting tips for Uncharted 4. They can be useful especially in the early chapters of the campaign.

More tips and useful information regarding gameplay can be viewed on a dedicated page of the guide: Beginner's Guide.

Our Uncharted 4 walkthrough describes all 24 chapters. There are 22 main chapters, a prologue, and an epilogue. The story is linear and there aren't any important decisions to make during the gameplay. Moreover, there is only one, universal ending, which takes place after finishing the epilogue.

Treasures are the main type of collectibles in Uncharted 4. We divided them according to the chapters in which they are found. In most missions, you can find between one to several treasures.

Aside from treasures, there are also two categories of collectibles and you can engage in unique, optional conversations. These elements of the game are described in detail on dedicated pages of the guide.

Uncharted 4 has a few more challenging puzzles. The most difficult puzzles in Uncharted 4 are:

You can find solutions to all the puzzles in our walkthrough and on the Harder puzzles page. 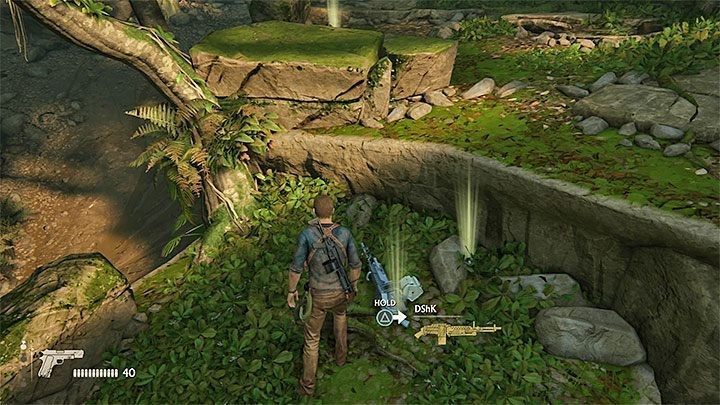 In Uncharted 4: A Thief's End, besides standard weapons, Uncharted 4 also has unique ones. They are:

The platinum trophy in Uncharted 4 can be quite challenging, although there have been many games released for the PS4 that are even more difficult to platinum.

The most problematic trophies are those received for completing the game on Crushing difficulty, within a specified time (speedrun) and with high accuracy rate. Expect to finish the game at least twice. There are also a few trophies related to combat and collectibles. The platinum trophy requires you to also get those related to multiplayer, but they shouldn't be very difficult. All information about the Uncharted 4 trophies can be found in our trophy guide. Here are direct links to each category of achievements:

The full requirements of the PC version will be added once they are officially released to the public, as the release of the PC version is planned for 2022. A strong rig may be required, as this is a remaster with numerous improvements to the graphics.

When it comes to the console version, it takes up 44GB on the console's disk. The upgrade from PS4 to PS5 version is paid, and offers support for 4K resolutions, 3 different graphic modes to choose from and support for unique features of PS5 console. More information can be found on a dedicated page: System Requirements.

Completing the main story only should take you about 15 hours - Uncharted 4 is the longest game from the series. Obtaining all collectibles should lengthen the experience by 2 to 3 hours. To get the platinum trophy, you'll need to finish the game at least twice - this means that at least 30 hours of playtime is required to get it.

Uncharted 4 also offers a multiplayer mode, which can attract the player for long hours. Fortunately, the Platinum trophy requires only little time spent in multiplayer battles.

To learn more about how much time it takes to complete Uncharted 4 and obtain 100% completion of the game can be found on a dedicated page: Game Length.

More About Uncharted 4: A Thief's End

I Don't Get the Uncharted Phenomenon

Uncharted is one of the most appreciated series. In theory, it should appeal to me, too, because I appreciate good, linear action games. Unfortunately, there was a lot that didn't sit right with me, which is why I can't understand the phenomenon.

Exes, exclusives – they often determine which console we buy. In this generation, by far the most interesting titles of this type were available on Sony PlayStation 4 – and we chose the best of them.

PlayStation 4 has received hundreds of games over the last seven years. Our editors have selected sixteen greatest PS4 video games, including exclusives, that you should play - no matter who you are.