On this page of our guide to Uncharted 3 Drake's Deception you can find a detailed walkthrough of Chapter 21: The Atlantis of the Sands. The title of this chapter is The Atlantis of the Sands, and as you traverse the ancient city you must fight stronger demonic opponents. Not all opponents will be real, but each of poses a serious threat. Also, you will have to solve a puzzle associated with filling the pool with water. 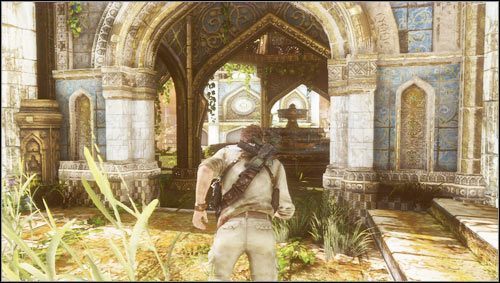 Once you enter the ancient city, go down the stairs. At the crossroads, turn right to reach the gazebo with a fountain [1].

After a sad cutscene, you'll see that Marlo goes down in the elevator.[1]. Before you can chase her, you will have to fight with a few enemies. After killing the first thug, you will notice that your enemies have gained some new abilities. A deadly dose of bullets will turn them into demons instead of killing them [2].

Of course, you can still defeat them but you will have to use three times more ammo than usual to kill them. Additionally, they will have a new ability. Thanks to the teleportation [1] skill they will be able to avoid your attacks. Also, they will be able to immediately strike you from both sides. In addition, they can use a flame blast, that will push you away during melee combat. After they turn into a demon, they will also be able to cast fireballs [2].

Once you get rid of the first wave of enemies, another small group will come by an elevator. Defeat all enemies and use the elevator to go down. Before you use the elevator, remember to search the area to collect weapons and ammunition. Due to the new abilities of your enemies, you should be interested in a weapon of the greatest firepower. A grenade launcher and a revolver with an optical scope (due to very high damage) are excellent choices here.

Rifles that work best while hiding behind a cover won't be that effective anymore. Mainly due to fast movement speed of your opponents, who have become extremely dangerous in a short-range battle. As soon as you're armed, get in the elevator [1]. After you move down in the elevator, Talbot will throw a smoke grenade [2].

Run through the smoke and start chasing your cruel enemy. After a short while, you'll lose him in a dead end [1]. Return to the previous location. You will get to the streets of Carthage. After a while, hostile spiders will come out of the walls [2].

Therefore, try to run away from the imaginary enemies. After you run through the butcher's shop you will turn into a teenage Drake [1]. Continue the escape along roofs of the buildings that you have already seen in the initial chapters of the game. While running on a narrow balcony, spiders will block your path so you have to jump over the railing on the left. While lying on your back, you'll notice Sullivan approaching you with a gun pointed at you [2]. You can shoot him or let him 'kill you'.

After that you will return to the spot by the elevator in the lost city where you have encountered Talbot. Run down the stairs and run straight to the gate [1]. When it turns out that it's closed, Marlo's demonic people will attack you from the elevator's side [2].

After a short battle, the previously closed gate will open [1]. Walk through it and defeat several opponents under the monument in the middle of the street [2]. 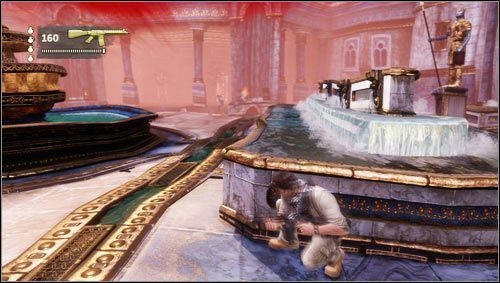 Once you defeat all opponents, a large gate will open at the top of the stairs on the left. Move through the gate to get to a spacious square with fountains [1] and begin a large battle with demonic enemies.

It will be difficult to find a decent cover here, especially as enemies turned into demons throw burning grenades, which are extremely strong and explode on impact, which makes them difficult to avoid. Also, you cannot throw them away towards your opponents. Try to stay away from the middle of the square and hide only behind high covers [1] (like statues). If you lack a decent weapon, you can find a grenade launcher under the exit gate [2], which will surely make this encounter much easier.

After the battle, leave the square through open gate. You will enter a room. At the end of it you will notice Sullivan [1]. Approach your friend, and when he disappears, activate a lever nearby to fill the pool with water [2]. 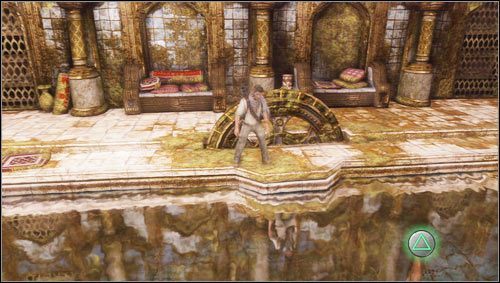 In the water reflection, you'll see Drake standing on the left [1].

Run up to it, and then rotate the wheel next to the pool [1]. The water doppelganger will run along the edge of the pool towards the next wheel. Run after him and turn the other wheel. A luminous object will appear in the middle of the pool. Approach it and take it out of the water [2]. 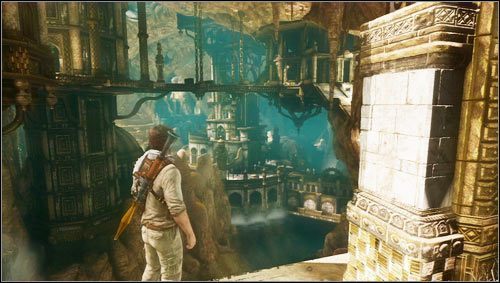 This way, you'll get to a chamber full of human remains. Leave the room by walking through a corridor with statues, bypass the fountain and go down the stairs to see your enemies in the distance [1].