This page of the guide contains the walkthrough of the second part of chapter 6 of Uncharted 3 Drake's Deception. This chapter is titled The Chateau. Later in this stage you need to solve a puzzle with four statues of knights, a puzzle with stone slabs on the floor and a puzzle with the symbols on the wall. In between the puzzles you have to fight with the hostile mercenaries. 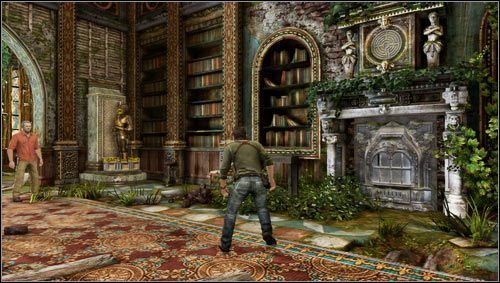 We enter a room with a fireplace and four statues of knights placed in the corners of the room [1], each of the knights holding a different weapon. 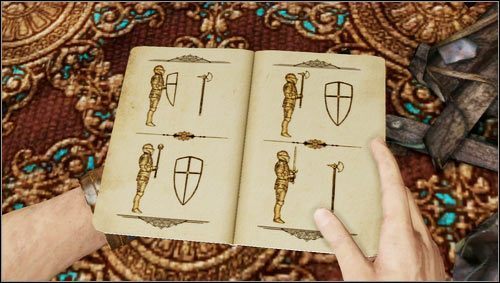 Once you approach the statues, you will notice that they are placed on mobile platforms. A quick glance at Drake's notebook will reveal the correct positioning of the knights [1]. According to the sketch in the notebook, you need to rotate them so that the knight is facing towards the knight holding the weapon drawn on the right side of the knight's sketch.

Once we set the statues properly, approach the fireplace [1] - an attempt to open it ends with a hard landing of Drake in a cave under the castle. Moving down we get to a narrow gap [2] that we must slip through.

After an unpleasant encounter with spiders, you will find an underground stream [1]. We must enter it and swim under the water to reach the next part of the cave. Wading through waist-deep water we will reach a high cave [2].

We jump over the chasm to the other side and climb the wall [1] towards the light. Once we jump on the wall of the well, we need to speed up the climb, as the pieces of the wall on which you are located will fall off [2].

The encounters with the mercenaries 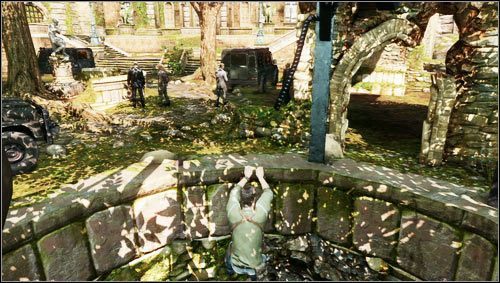 Leaning from the inside of the well, we will notice that our competition has also become interested in the Chateau we explored [1].

Before we get out of the well, we take out the first thug and pick up the rifle he left [1]. The AK-47 is not a very accurate machine gun. If we haven't been spotted, we may eliminate several more enemies quietly. If our actions alarm the enemies, we hide in the ruins to the right of the well and deal with the advancing enemies [2].

After the battle, approach the monument in the center of the square and get rid of the last enemies, firing at us from the windows of the nearby ruins [1]. Taking advantage of the moment of peace, we replenish ammunition by collecting pistols and rifles left by the enemies. Among the corpses, we will find a submachine gun named "Arm Micro" [2]. This is a weapon effective at short range and takes the place of a small firearm (pistol), meaning that we can carry it without getting rid of the rifle.

Once ready for further encounters, we head towards the windows [1] from which the enemies were shooting at us and we get to them by climbing the wall. As soon as we pass through the window, the door will open, from which a bandit with a sawn-off shotgun will jump out. After taking the foe out, we go through the door, pick up grenades and test them on the two opponents attacking us from below [2].

We jump off the ruins and follow the corpses of the enemies. When Drake hides from the attackers, we once again use grenades to get rid of the two enemies firing at us from above [1]. We can get inside the building through a hole in the wall [2]. 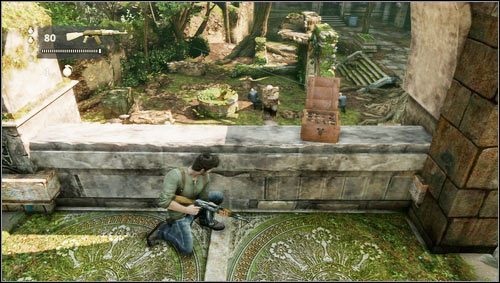 Once inside, we climb the stairs and head towards the sounds of combat. We will see Sullivan fighting with the thugs [1].

Using a convenient shooting position, we help him eliminate the first wave of enemies. Afterwards, we jump down and get rid of the incoming reinforcements. Once we have dealt with the enemies, we climb up the stairs [1] and bash through the closed doors with Sullivan [2].

We go down the stairs and jump down to the ground to find an old corpse [1]. We descend even lower through a trapdoor in the floor [2] to find ourselves in a room with a puzzle. 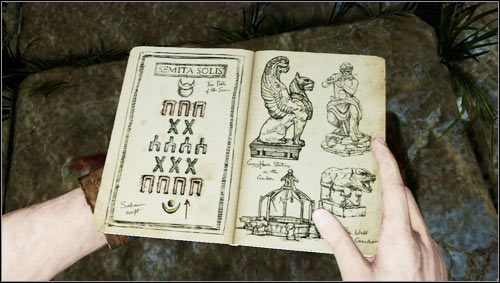 On the floor there are stone slabs with symbols. By looking into the log we learn that in order to activate the mechanism that opens the secret passage, we must properly move from the initial symbol (yellow moon and wheel) to the final symbol located at the opposite end of the room [1]. Along the way, we must stand on the right amount (also indicated in the notebook) of the symbols while sticking to the specified order. 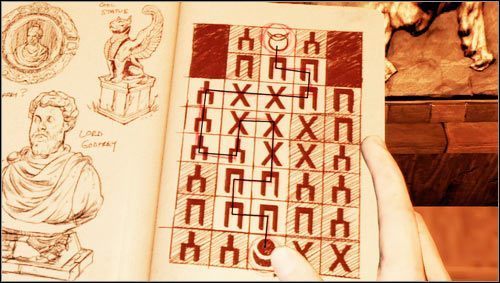 The solution of the puzzle is shown in the picture above - we drew a line symbolizing the correct route of the march [1]:

If we step on the incorrect slab, all the previously activated ones will return to their original position and the whole activity will have to be started over.

We pass through a secret passage [1] and slowly explore the old laboratory. After a brief conversation between Drake and Sullivan, we approach the stone table in the center of the room [2] and use the ring decipher.

Once the hint is deciphered, we move the stone table to discover a descent to the underground [1]. We carefully descend the stairs to find ourselves in a dark cave. After lighting the torches, we make our way into the depths of the cave and unlock the doors [2] leading to the tomb. 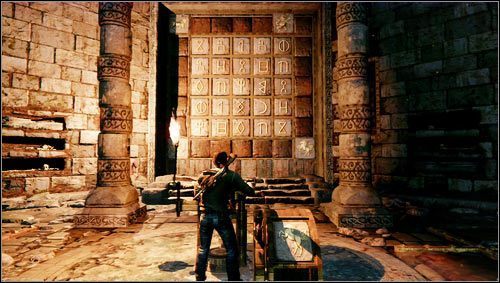 Another puzzle awaits us here. A table with symbols can be found on one of the walls. In its four corners there are tiles with the images of a bull, a horse, an eagle and a lion. They can be mounted on the wall using a machine placed in the center of the room [1].

On the sides of the room there are stone slabs with images of a bull, a horse, an eagle and a lion (two plates are destroyed). Under the image of animals on the floor there are dark plates [1], in which we will see different symbols (the same as on the board), depending on which side you look at them. With these symbols, we can determine the position of the animal on the board.

In Drake's notebook we will find the correct position of the two animals [2], the rest we must determine, based on the tips placed on the sides of the hall. 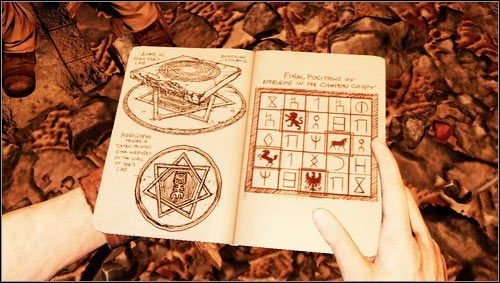 Once we have collected all the necessary information, we can use the machine and set the animals on the board. The solution of the puzzle can be found in the above screenshot [1]. 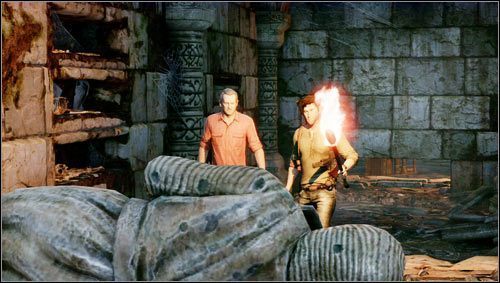 Go through the hidden passage and approach the tomb [1]. After recovering the artifact, leave the tomb to encounter your competitors.