Some burglars entered Yan's basement, but fortunately for him he noticed that in time and locked them inside. He wants you to go down there and kill them.

Sling wants you to eliminate a man named Scar. You might remember him - he's the crook that you've seen in Four Stones. He can be found in the center of the village. You'll be paid more than 5000 Gold for that. 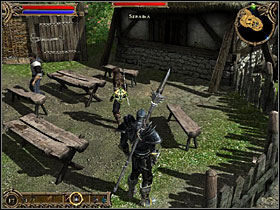 Zatagi orders you to intercept a package from the Merchant Association. In order to complete his request, you have to follow the Merchant questline and become their courier. Check the "Tharbakin" and "Cathalon" chapters for detail. When you have the package, just show it to Zatagi. The merchants won't be able to tell that you've betrayed them, and you'll get the package back so that you can finish their quest (it seems to be bugged in versions earlier than 1.4).

Aki, Giriza leader, won't talk to you unless your reputation in the family is high enough (think 8/10). This mission is about killing the Merchant Association leader.

HINT: Unfortunately, in version 1.4 this quest is unsolvable. Check back on our guide once the next patch comes out.

Smuggle in the poison

Athos can be found near the southern gate of Qudinar. He needs 5 lockpicks from a trader named Stelios Lomaios. In fact, you can give him any lockpicks to finish the quest, but first talk to the trader to get another quest.

Stelios wants you to retrieve his medallion from Athos. Tell Athos to give it back and he will attack you. Kill him, take the heirloom from his body and give it back to Stelios.

Seloth is near the Qudinar teleport. He wants you to bring him a Summon Skeleton spell, and later - a necromancer staff. These can be found by any necromancer's dead body. Try one of the dark towers for instance.