Transport Fever is an economic strategy game, in which you manage a transportation enterprise. Your responsibilities include building infrastructure and creating a net of connections, in such a way as to create profitable routes which offer high profits. To achieve this goal you will be using means of land (vehicles and railroads), maritime and aerial transportation. You will be transporting various resources, which you will then turn into products, which in turn are needed to develop cities.

Caring for the citizens themselves is also important, as they have their specific work places and favourite brands and shops, which will force you to develop your transportation network in a way that fulfils their expectations. If you have previously played Transport Tycoon, Transport Giant, Traffic Giant, Cities In Motion or Train Fever, than you will find many similar qualities and dependencies in establishing your company in Transport Fever. Most of the game guide you could find redundant or obvious, but there are several distinctive elements, unique to only this particular game.

When it comes to beginners, there will be a lot of tips here, starting from how to set up a simple bus line, to creating large, connected land, sea and air routes. 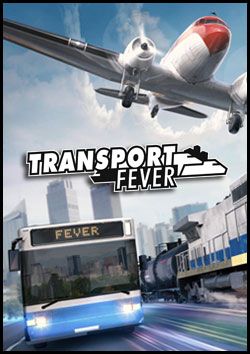 Transport Fever is an economic strategy, in which the main goal of the players is building an enormous and fluent transport network by linking different locations and allowing transportation of goods, people, etc. The most basic task in Transport Fever is the development of roads and rail tracks, designing paths and routes, and so on. This task is performed by means of a powerful, yet intuitive editor.

The roads and tracks themselves would be useless, if not for strategic buildings used for loading and unloading, embarking and disembarking of goods and passengers: train stations, commercial ports, and airports. It’s not enough to just build them and let them be; they have to be constantly upgraded to be able to meet the increasing demands of the market.

The mechanics are furthermore complimented by an advanced system used for managing the freight of goods and persons. Above all that, the game also has a complex economic layer: all the investments require money that first have to be earned, and then wisely spent.

Transport Fever gives the players two historical campaigns set in Europe and North America. In both cases the campaign begins in 1850. Alternatively, there is the “Endless” mode, which is unconstrained by any time limits. This site is not associated with and/or endorsed by the Gambitious Digital Entertainment or Urban Games. All logos and images are copyrighted by their respective owners.