Whatever the player tries, in Total War games sooner or later there will come a time when military conflict is inevitable. For this reason, you should get to know the mechanics of the army, as it is one of the most important elements of the game - it will allow you to conquer areas controlled by other factions, defend your domain or significantly influence the level of public order in the commanderies. In this section you will learn everything about army management. 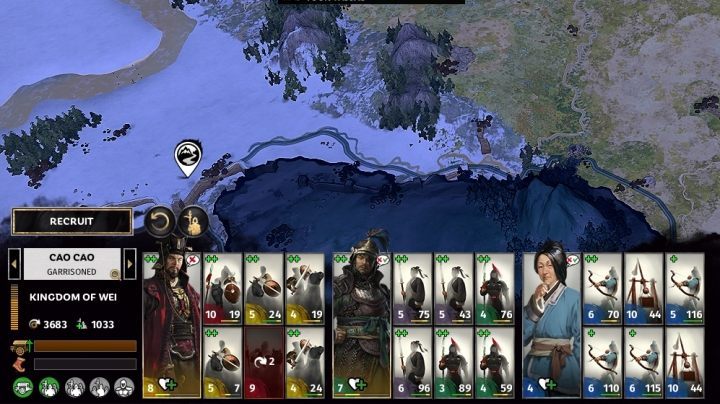 Total War: Three Kingdoms introduces significant changes in the army mechanics. The most important novelty is the resignation from the Lord's system, to which there were assigned up to 19 other units (including heroes). This is known, for example, from both versions of Total War: Warhammer.

Instead, units within the army are held in Retinue, and each army can hold up to three such Retinues. At the head of the Retinue stands a General, and he has 6 units of troops assigned to his Retinue. These units receive bonuses (for example, damage, stability or increase the morale) of their General, but when the General dies on the battlefield, they will get huge penalty to morale. In addition, if a General of Retinue gets killed, his troops will not return to battle as soon as they start to flee the battlefield - they cannot be reunited.

Moreover, the units inside the Retinue are fixed - once the unit is completely destroyed in combat and the army itself has won the battle, the defeated units will not disappear from the army. Instead, they will be in a state of regeneration - they may be unavailable for a few turns, and after that time they shall get restored to the army, to the proper Retinue. This means that it is not necessary to recruit the defeated units again. The conscious recruitment of troops (to avoid wasting gold unnecessarily) is becoming more and more important. 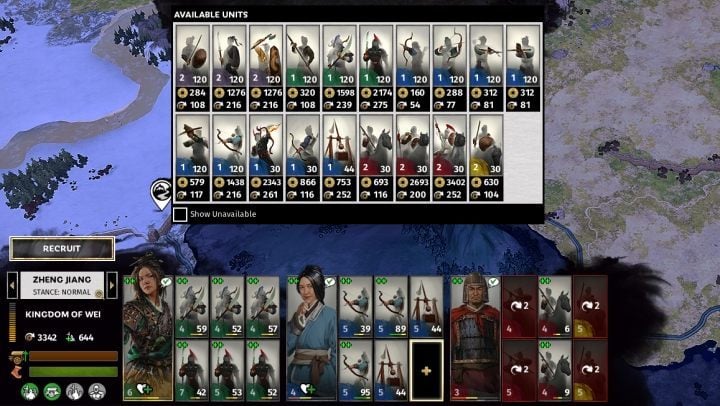 The creation and expansion of the army is based on two actions. You can use following options:

What is important, unlike other Total War series installments, in Three Kingdoms, the recruitment of new units does not take place instantly. Instead of the magical materialization of a whole unit, it is created with a small number of units, increasing its size with each turn, to finally reach its full strength. Of course, this type of troops should not be used in combat before reaching full strength, and the whole mechanism can be accelerated by increasing the level of the Replenishment parameter. Its level is affected by the following:

If you are planning intensive military operations, it is worthwhile to expand the commanderies adjacent to the areas you intend to conquer, it is also worth investing in appropriate reforms, which offer global bonuses, for all armies on the map. 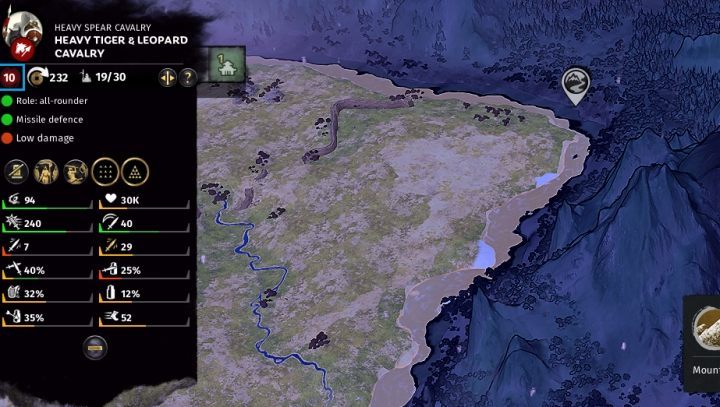 The level of experience of units and troops can be seen under their portrait.

The last thing related to the army is the ability of individual units to gain experience points. This mechanics works in the same way as generals earn experience - units receive them for taking part in a fight, and their amount depends on their performance, i.e. how many enemy units they can defeat. By default, the unit starts at level 1 experience and progresses to the next level, up to level 10, thanks to subsequent battles.

Importantly, the levels of units do not allow for the assignment of development points to them, as is the case with generals. Instead, with each level, the unit will simply gain in effectiveness - melee units will deal more damage and will be able to take more damage, ranged troops and siege machines will shoot more accurately and deal more damage, while cavalry will gain in speed and effectiveness of the charge. What is most important? The Morale of the troops will increase. The higher the value, the more resistant the unit will be to unfavorable factors on the battlefield - flanking by enemy troops, getting shop by ranged units and artillery, attacked by cavalry, or attacked by units causing fear. When discipline of units will fall to 0, these troops will flee, and the player will lose control of them for a moment.