Diplomacy in Total War: Three Kingdoms has undergone dramatic changes when compared to the previous games of the series - on the one hand, it is now more transparent but on the other hand, it offers much more interesting options and strategies that you can use during the game. Diplomacy is also closely related to trade, both of which are explained in this chapter. 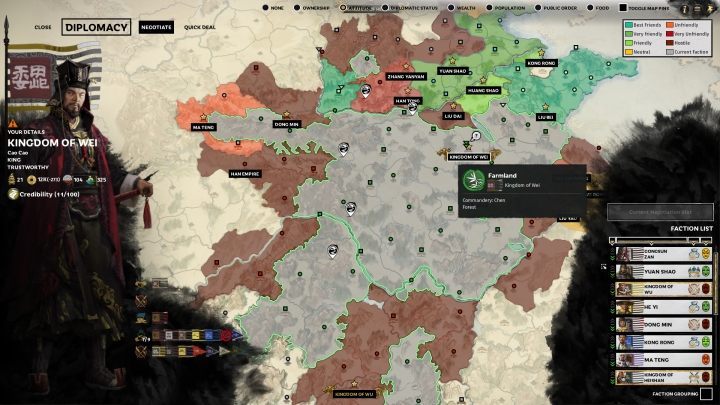 By default, the diplomacy window shows your faction's relationship with others.

You can open the diplomacy window by clicking on the appropriate button located in the upper left corner of the screen, or simply pressing "3" key. When you do this, you will see a world map that shows all the factions that are still in the game, as well as the lands that belong to them. Once you open the map, you will be able to see the relationship between other factions and yours. Click on the other lands belonging to another player to learn the relationship between that particular faction and all the others (including yours). Everything is presented with appropriate colors: 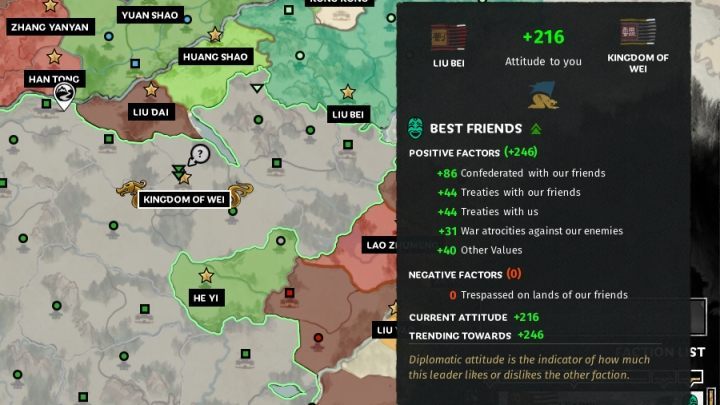 Move the cursor over the icon next to the faction's name to check the details of the relationship.

In addition, each faction on the list displayed on the right side of the screen has an icon with a face painted in one of the above colors. Hover the cursor over it to learn the details regarding the relationship - what treaties were included between the factions, what are the positive and negative aspects of the relationship, the current level and the level that the relationship will have in the next round. "Trending towards" is particularly noteworthy - based on this value, you are able to determine whether, for example, a particular faction will change its attitude towards you in the next round (declaring war, proposing a trade agreement or a diplomatic and/or military alliance).

Using diplomacy and the available options

After clicking the "NEGOTIATE" button, you will see a list of all available diplomatic and trade options.

To use diplomacy, you need to open the mentioned window ("3" key). Once you do that, simply click on the faction you want to negotiate with and press the "AGREEMENT" button. After that, the diplomacy window will change slightly, giving you access to several category buttons. You can use: 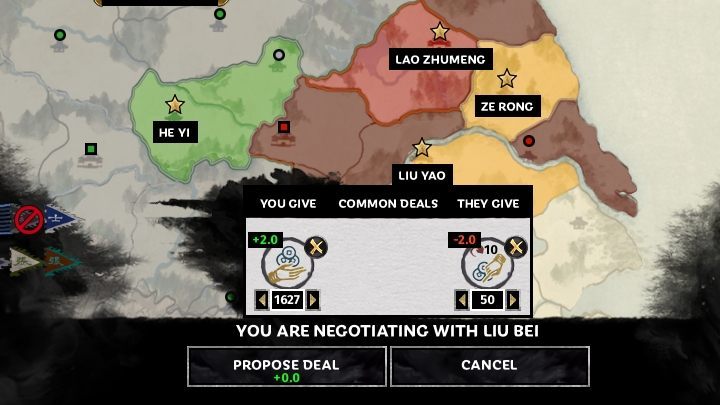 In Total War: Three Kingdoms, diplomacy has taken the form of negotiations - after selecting one of the options described above, the player will receive information about the potential "cost" of this action. It will be represented as a negative value - "-5", "-10" or "-50". If you want to perform a given action, you will have to give something away - offer compensation, trade food, etc. - which, in turn, will add a positive value to the negotiations. To complete the action, it is necessary to reach a value of at least "zero" (the difference between the proposals of the player and the other faction). If you get above the zero value, you will have a greater chance of improving relations between factions.

The "costs" of an action depend on the relationship level between the factions - how much you need to give away to initiate an action. The better the relationship (these levels were described at the beginning of this chapter), the lower the cost. The overall strength of your faction also affects this - the stronger you are, the more negatively the other faction will approach you.

Confederate with other factions and being a vassal 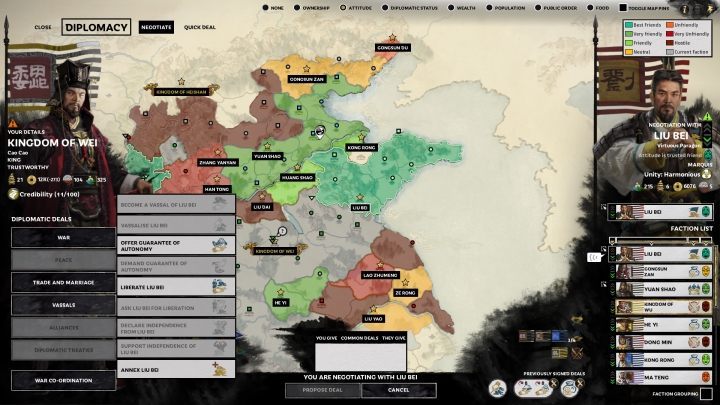 Your vassal will arrive with military assistance when needed.

As in the previous entries in the Total War series, there is also the possibility of joining another faction to the Confederate or assigning it to become your vassal. In the first case, the faction will be completely absorbed - you will get all the settlements and armies belonging to it, as well as the characters that were hired by it. Unfortunately, you will also get its financial position - if the income per turn was negative, expect a powerful blow to your economy. The option to appoint someone to be your servant is more interesting - the faction will be on your every call (e.g., in case of conflict, it will support you unconditionally). You will also receive a portion of its income. Later, you will be able to absorb the vassal - it works on the same principle as confederate them.

In both cases, you need to prepare yourself to face high costs - both options require you to appropriately encourage the other faction by offering generous pay, items, or a lucrative trade or diplomatic offer. Both options will also be pretty out of reach if the faction is hostile to you - these diplomatic options will only be available to allies and best friends.

Marriage - how to use it and what does it offer 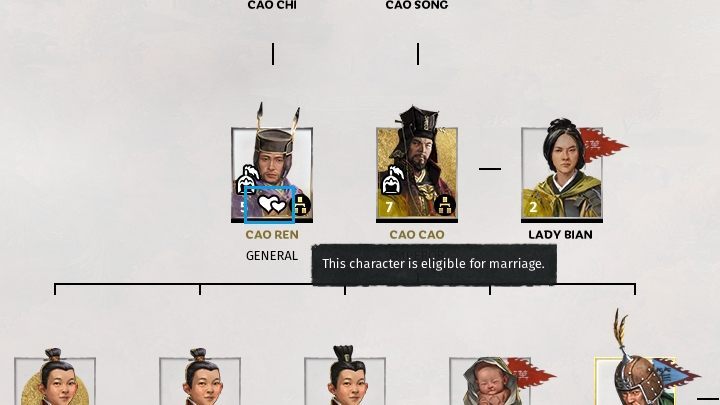 An icon with two hearts will appear next to a character suitable for marriage.

Marriage is also a new mechanic in the game. Thanks to it, you can create a marriage between one of the members of your court and a character from another faction. This diplomatic option is characterized by several features, namely:

How to trade with others 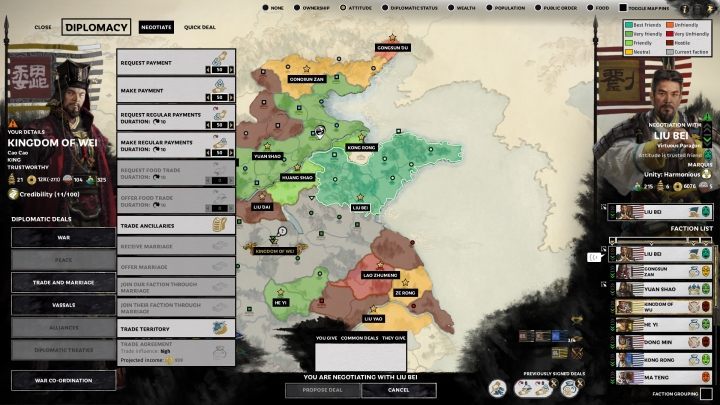 A window showing all the trade options.

The last and equally important diplomatic option is trade. Trade is divided into several parts. You can send or receive a given amount of gold from another faction as a one-time or long-term payment. This similarly with food - you can send a certain amount of food to another faction throughout X number of turns, or get it from another faction. The third option is to trade items - weapons, armor, mounts, supporters, or accessories - in exchange for influence, gold, or pushing through other diplomatic options.

The fourth and separate issue is exchange. You exchange one good (grain, rice, iron, jade, silk, etc.) to get another from the other faction - this will result in a large increase in the gold received each turn. This is also the option with the most restrictions - the number of trade exchange offers depends on the development of the faction (level, built buildings, as well as assigned posts in the court). You can exchange goods only with factions you can access directly (their border is next to yours, or when you are able to access them through the territory of an ally).